New York: Thousands of Essential Plan enrollees are about to gain free dental & vision coverage thanks to the #ARP

It's been awhile since I've written anything about the ACA's Basic Health Plan (BHP) provision. BHP is a program which every state has the option of taking advantage of, but so far only two have: Minnesota and New York State. I'll let Louise Norris explain:

...Coverage under the BHP is available to people who aren’t eligible for Medicaid, don’t have access to an affordable employer-sponsored plan, and whose household income doesn’t exceed 200 percent of the poverty level (a little more than $43,000 for a family of three). And it’s also available to legal immigrants with income up to 138 percent of the poverty level who aren’t eligible for Medicaid because of the five-year waiting period.

In other words, in most states, people earning up to 138% FPL qualify for Medicaid, and if they earn 138% - 400% FPL they're eligible for subsidized ACA exchange plans (of course, under the American Rescue Plan, they may still be eligible even if their income is higher than 400% FPL). In Minnesota and New York, however, there's a third tier sandwiched in between: Medicaid up to 138%, BHP from 138 - 200%, and exchange subsidies from 200 - 400% FPL (or higher via ARP). As noted above, certain legally-present immigrants are also eligible if they earn 0 - 138% FPL.

New York’s BHP (aka The Essential Plan) also presents a better deal for enrollees. NY Department of Financial Services noted that a person earning about $20,000/year would spend less than half as much in total healthcare costs on the BHP in 2016 (the first year the state’s BHP was available) than they would have on a subsidized private health plan in 2015. As of 2021, the state’s fact sheet about the Essential Plan indicated that premiums have remained at $20/month (or zero dollars, depending on income), although there is an extra fee to add dental and vision coverage if you’re on the higher end of the eligible income range for BHP coverage.

From what I can tell, the FPL thresholds on the fact sheet are a couple of years out of date, but the plans seem to break out as:

Unfortunately I don't see how much that "additional premium" is, but I assume it's smaller than the $20/month for the main plan.

Well, thanks to the American Rescue Plan, it looks like both the $20/mo premium and the extra premium for dental and vision care are being eliminated: 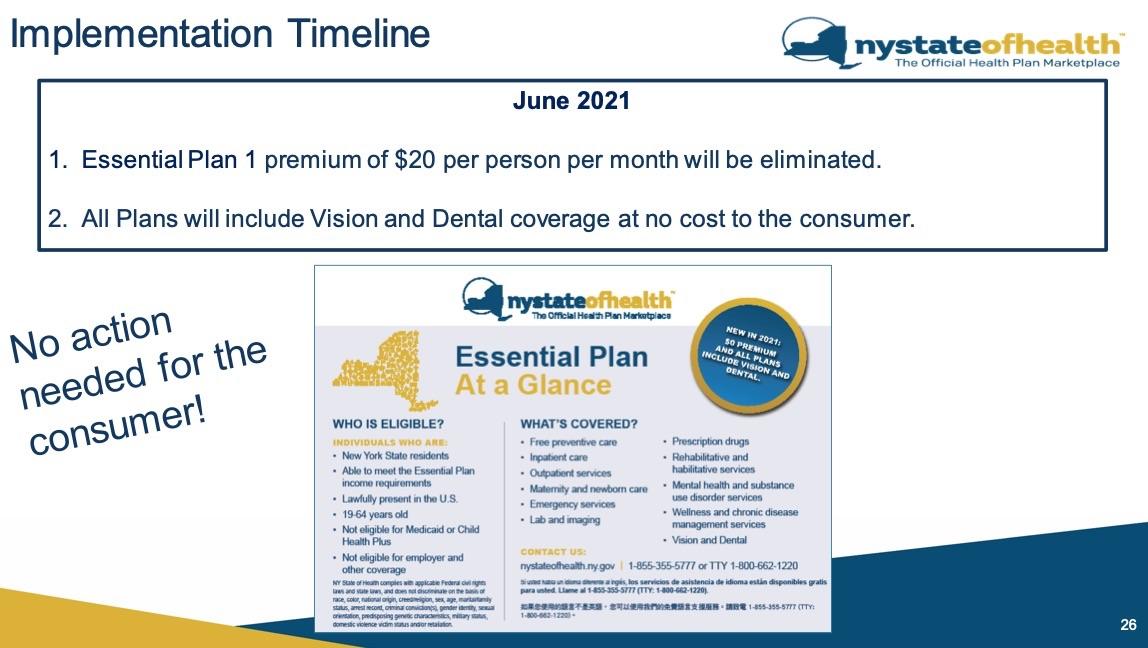 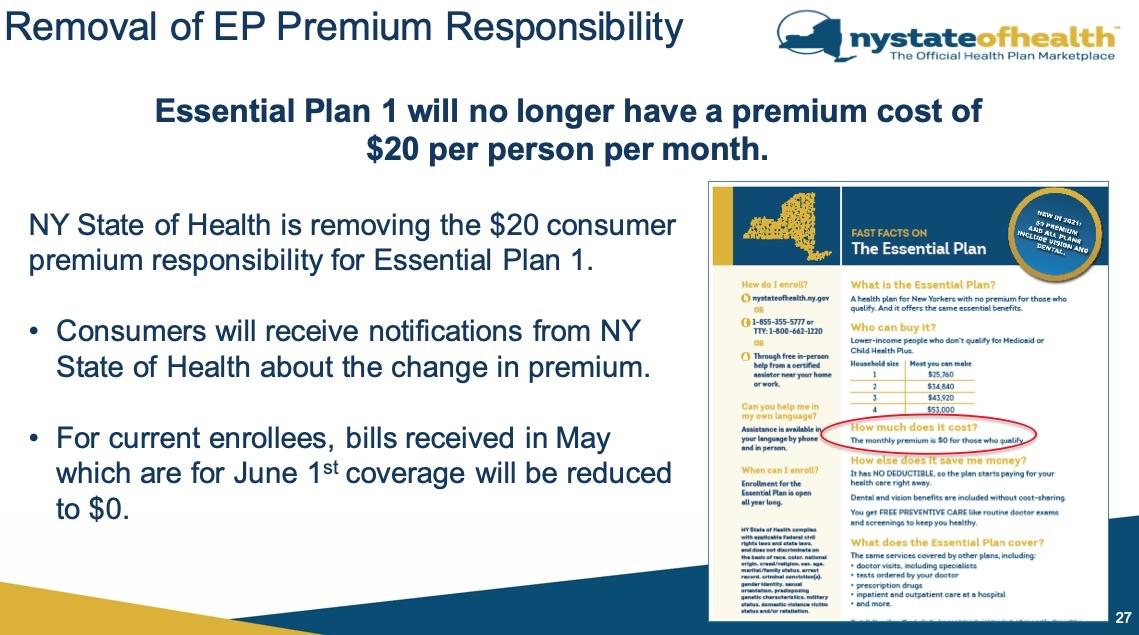 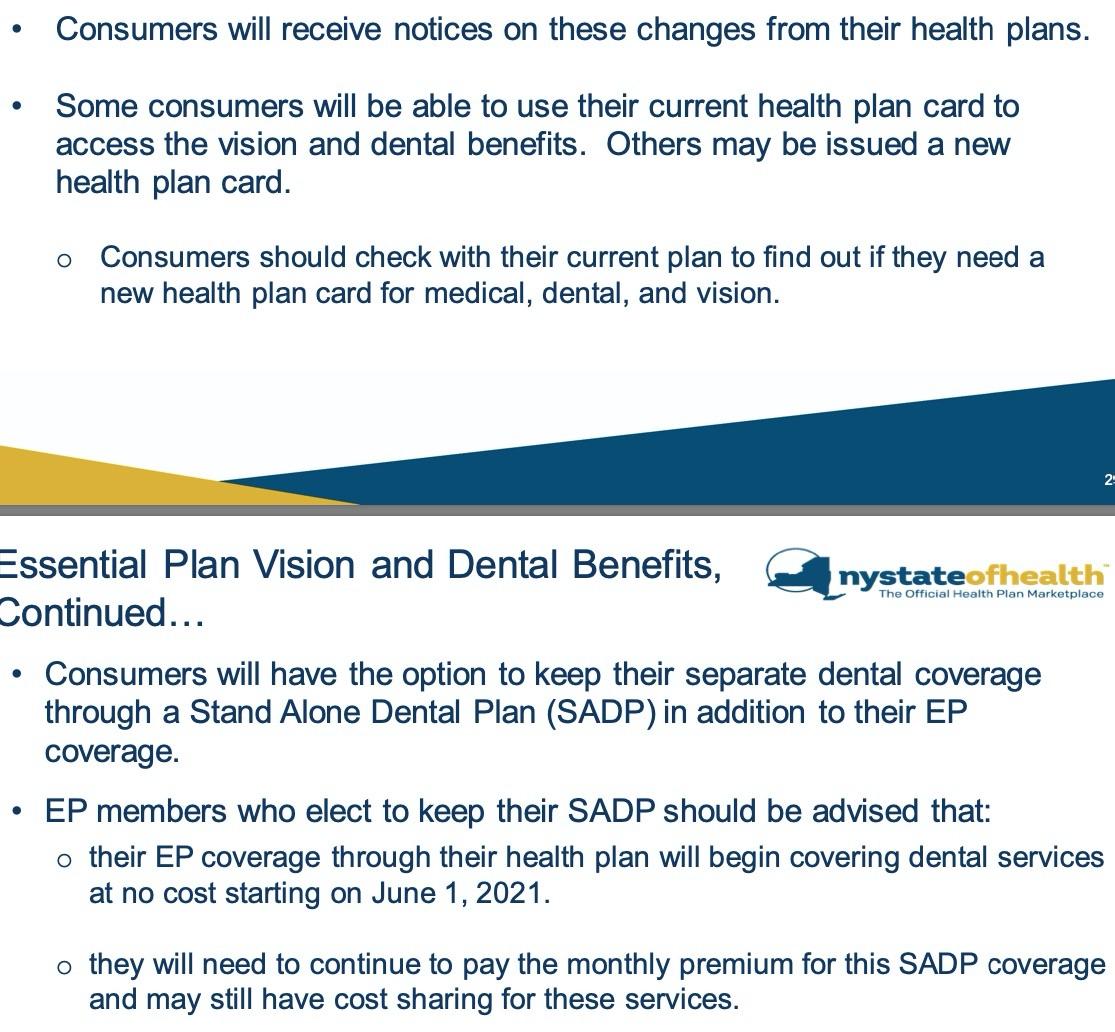 Total enrollment in New York's Essential Plan is around 885,000 this year. Unfortunately, I have no idea what the breakout is between the < 150% and >150% FPL thresholds, so I don't know how many of those 885K will see these additional cost savings, but I'm assuming it's a least a couple hundred thousand.