This morning, healthcare reform advocacy organization Protect Our Care held a webinar in which they went over the results of a new national survey of 1,200 Americans conducted a couple of weeks ago called, simply enough, "Next Steps on Healthcare: What Voters Want".

For the most part, none of the results are terribly surprising:

Several of the questions were more about the framing of the issues--that is, which specific types of messaging work best.

However, it was the last slide which honestly surprised me, and which is pretty relevant at the moment given the behind-the-scenes positioning regarding whether to use the potential $450 - $500 billion in savings from passing H.R. 3 to expand Medicare benefits or to pay for what's effectively ACA 2.0: 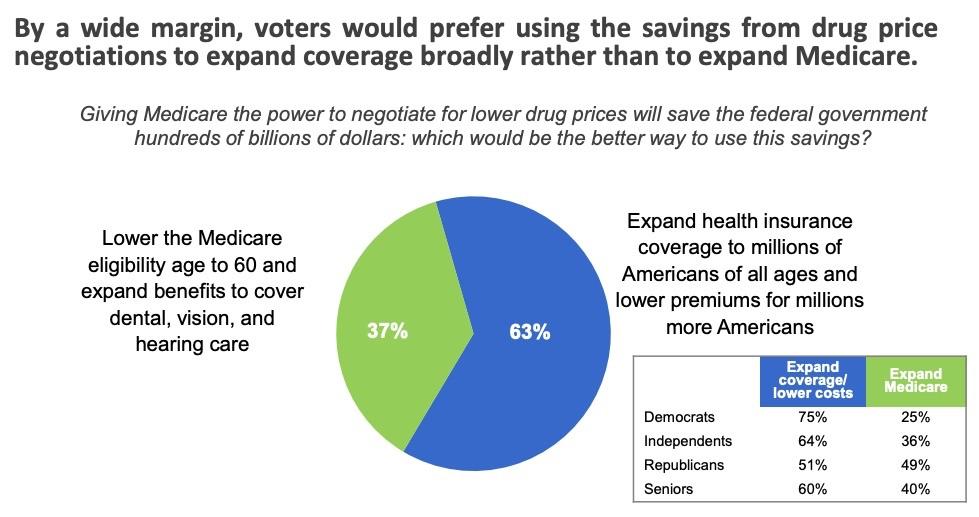 Huh. I would've figured there'd be roughly equal support for each...and there is among Republicans (who, let's face it, tend to be older on average). What's really surprising to me, however, is that among Democrats, it's 3:1 in favor of ACA 2.0 over beefing up Medicare...assuming you're forced to choose one or the other. As I noted a few days ago, this is a false choice...or at least it should be.

Obviously the wording of the question might be partly responsible, but this is still a pretty stunning result (and I say that as someone who's obviously a bit biased towards the ACA 2.0 side of things).