The administration is tasked with overseeing the health care law. Instead, it has made a major social media push to undermine it.

The Trump administration has spent taxpayer money meant to encourage enrollment in the Affordable Care Act on a public relations campaign aimed at methodically strangling it.

The effort, which involves a multi-pronged social media push as well as video testimonials designed at damaging public opinion of President Obama’s health care law, is far more robust and sustained than has been publicly revealed or realized.

I was sent this note yesterday morning: 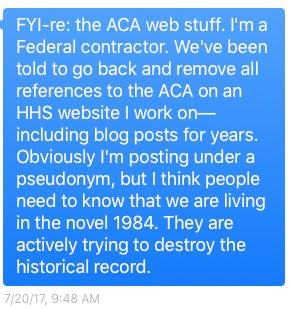 "FYI-re: the ACA web stuff. I'm a federal contractor. We've been told to go back and remove all references to the ACA on an HHS website I work on--including blog posts for years. Obviously I'm posting under a pseudonym, but I think people need to know that we are living in the novel 1984. They are actively trying to destroy the historical record."

I asked for verification to make sure this person wasn't bullshitting me at the time, and they provided it (I've obviously redacted their info, but yes, I confirmed their identity and verified their claim about which contractor they worked for at the time).

I wish I had a hard copy to give you. It was announced XXXXXXX. I don't even know if it came down via email—knowing this bunch they called so there wouldn't be anything to FOIA...

...FWIW, my real name is XXXXXXX and I've been XXXXXXXX. You can email me directly at XXXXXXX or call me at XXXXXXXX to verify if you like.

And if this information were to get out, I have two kids and two dogs who might end up homeless. I probably should never have said anything...

An Inside Look At How Trump Scrubbed Obamacare From HHS Websites

There was no better symbol of the Trump administration’s plans for sabotaging the Affordable Care Act than how, soon after the inauguration, its Department of Health and Human Services prioritized erasing mentions of the law on its web page.

The removals, as blatant as they were petty, quickly caught the attention of health care experts and portended a broader Trump effort to shirk its duties to implement the law, even after it became clear Congress was going to be unable to repeal it.

But the extent of the erasure effort is only just now becoming clear. New documents recently obtained by TPM give a fresh view into how sweeping and systematic this purge of ACA mentions was, and how, four years later, federal public health websites are still devoid of key references to the law.

The documents confirm long-held suspicions that the Trump administration ordered federal contractors to conduct an expansive keyword search for any place that the 2010 law was mentioned on the webpages of various HHS offices.

The search turned up hundreds of examples, and without much apparent debate, many of those mentions were ordered removed. The administration wasn’t taking a scalpel to the Affordable Care Act’s web presence to make it more reflective of Trump’s goals for reworking the law. It was pounding the law off the website with a sledgehammer.

While there were some carve-outs in the project for certain types of Obamacare references, other allusions to the ACA were scrubbed with seemingly no regard to the public health consequences of obscuring information about the law.

Providers who might be looking for regulatory information on Obamacare policies no longer see a link to the law on the HHS’ main regulations page, thanks to the 2017 removal job. Women seeking information about contraceptive care had information withheld from them about the Affordable Care Act’s coverage requirements for those preventative services.

The documents detailing the way in which mentions of the law were removed from federal websites were obtained by TPM through a 2017 Freedom of Information Act request.

Indications that the Trump administration was making aggressive efforts to suppress information about the law — going far beyond how a new administration typically may boost or play down its predecessors’ policy initiatives — were picked up on in 2017, as Congress embarked on its repeal effort.

As an aside, the timing of that FOIA request is not coincidental; as Ms. Sneed informed me a few weeks ago:

Funnily enough, the FOIA was inspired by a tweet of yours, when, around the time reporters were noticing that ACA references were being removed from the HHS website, you tweeted about a contractor who had been roped into that effort.

I'm proud to have played a small part in the unearthing of this ugly story, even if it couldn't be published until over three and a half years later.

Read Sneed's full piece. It's a deep, deep dive into not just how far the Trump Admin went to erase every mention of the ACA from existence, but also the ham-handed, chainsaw-instead-of-a-scalpel manner in which they did it. It's not a pretty picture.