A simple, grim formula for projecting how many will die of #COVID 3 weeks from today

The other day this depressing tweet was posted by the Dean of Brown University School of Public Health:

There were 225,000 new cases identified yesterday
Sat through Monday, cases will dip (usually do)
But we are now seeing Thanksgiving effect
Based on yesterday's cases alone
Expect 5K-6K hospitalizations 12/11 (if hospitals can accommodate)
and 4,000 deaths on 12/26

This was a very specific projection (especially the 4,000 deaths on 12/26) so I decided to do the math. Deaths have been lagging positive tests by around three weeks, give or take, so in theory you should just have to go back to see how many people tested positive 21 days earlier to get an idea of how many people will  die on a given day...as well as letting you project the death toll up to three weeks ahead, as Dr. Jha did above. 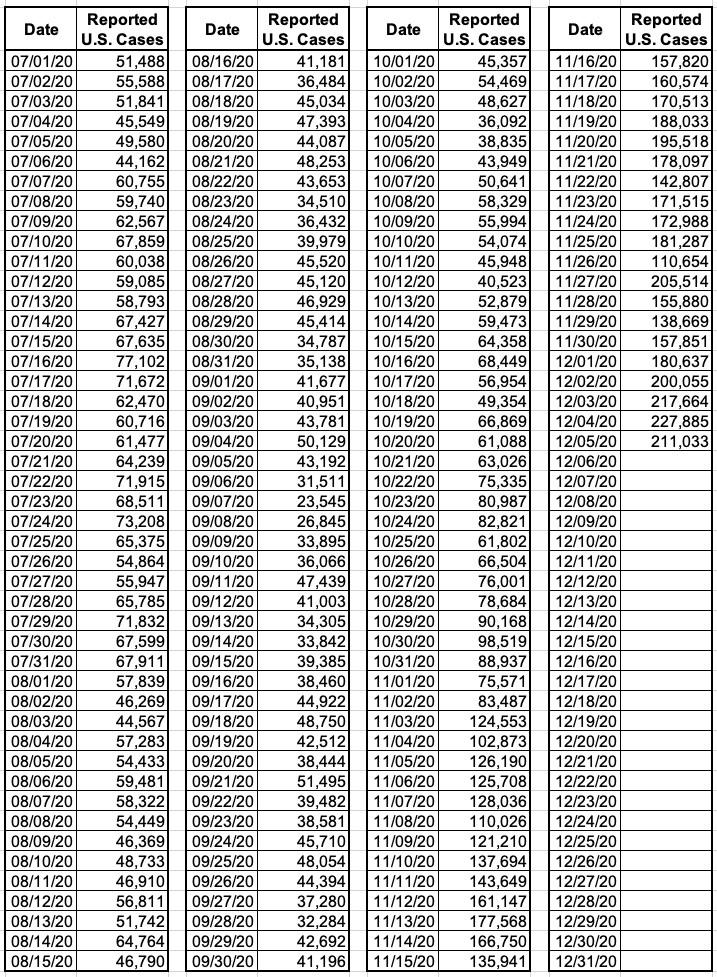 The average U.S. COVID-19 Case Fatality Rate has been running at between 1.7 - 1.9% for awhile now. That means roughly 1 out of every 56 Americans who test positive for COVID will die of the virus, on average around 3 weeks after testing positive.

If you divide each daily reported case total by 56, that should give roughly the number who will die 21 days later. Filling that into the table above gives the following (I've plugged in the 21 days prior to July elsewhere): 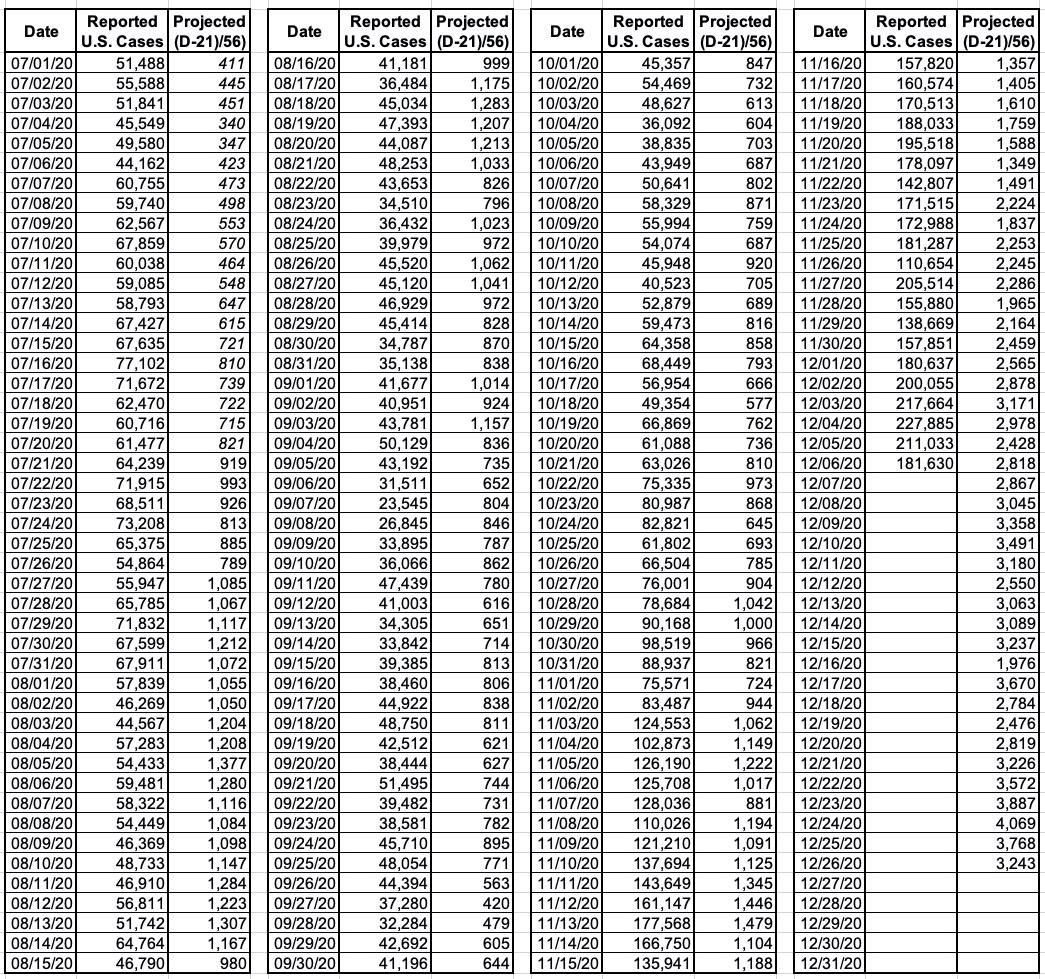 If we plug this data into a chart, it looks like the following: 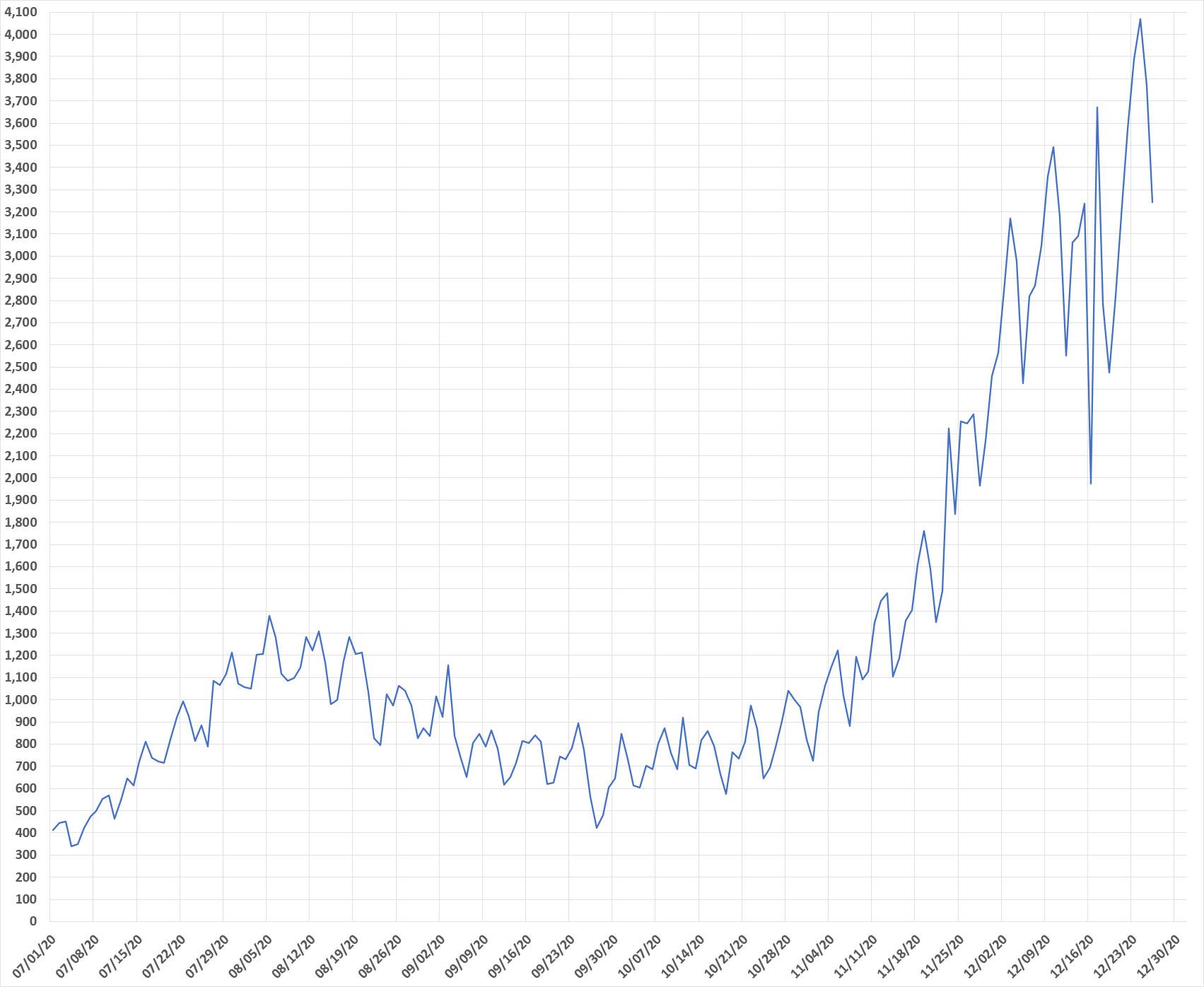 The jaggy dips/spikes are mostly caused by the drop-off in reporting over the weekend, so let's smooth that out by converting it into a rolling 7-day average: 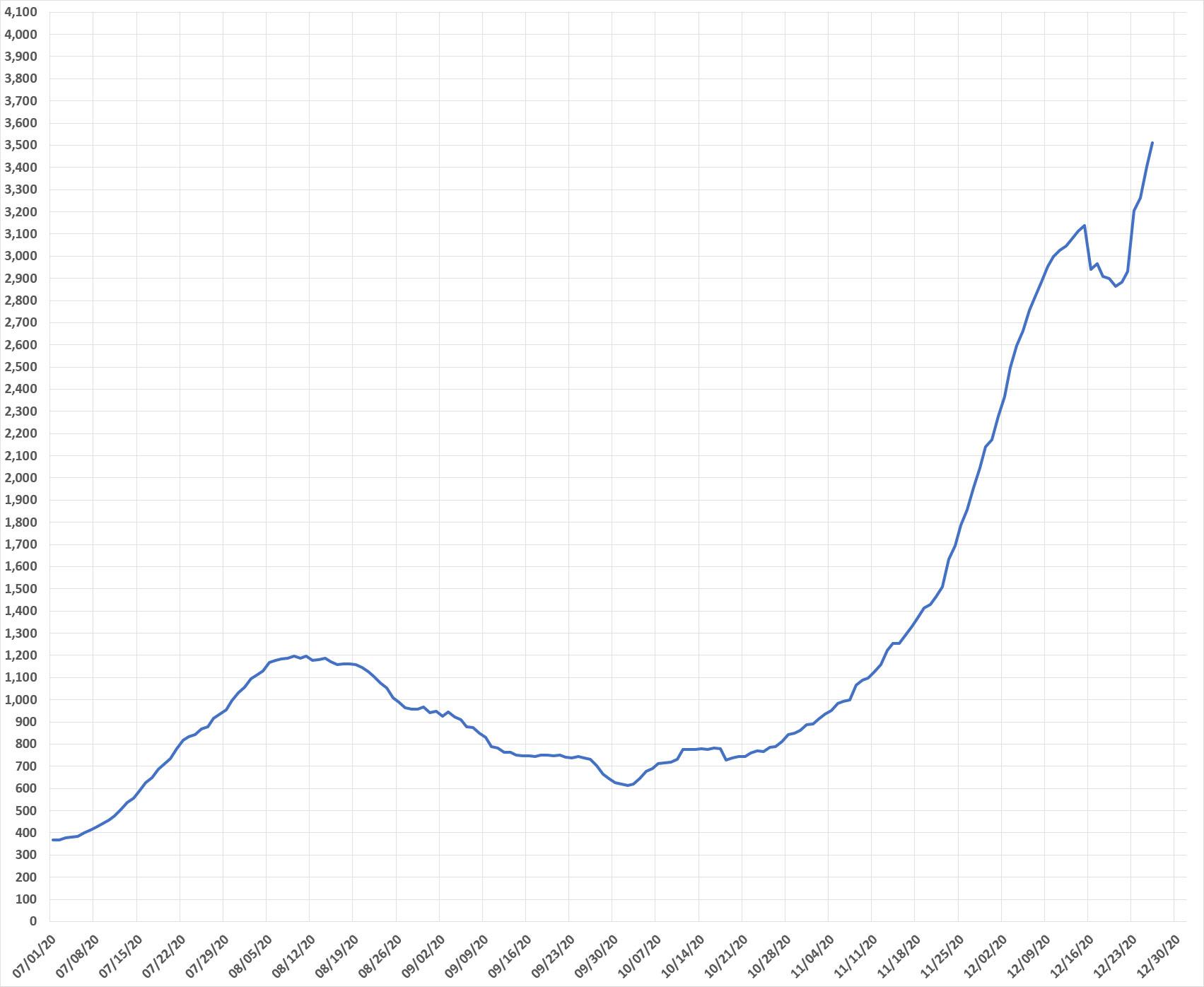 There's still one drop-off which stands out...Thanksgiving weekend, where reporting from many states stopped for up to five days instead of just two. As you can see, the reporting has already recovered from that and is spiking higher than ever...a rolling average of over 3,500 U.S. COVID-19 deaths per day the week of Christmas.

OK, that's the projection. Let's look at the reality: 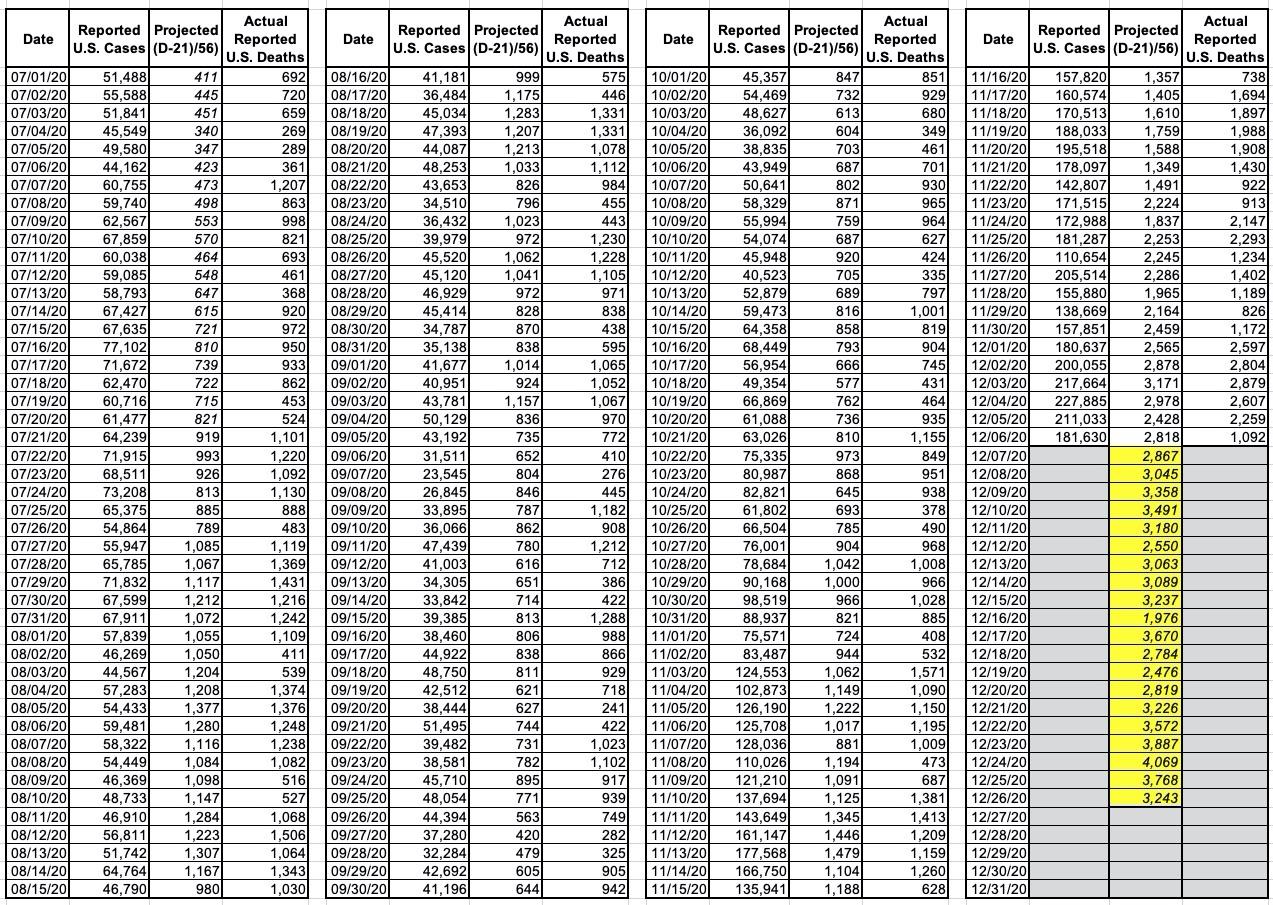 Next, let's plug the actual reported daily U.S. COVID-19 deaths into the graph: 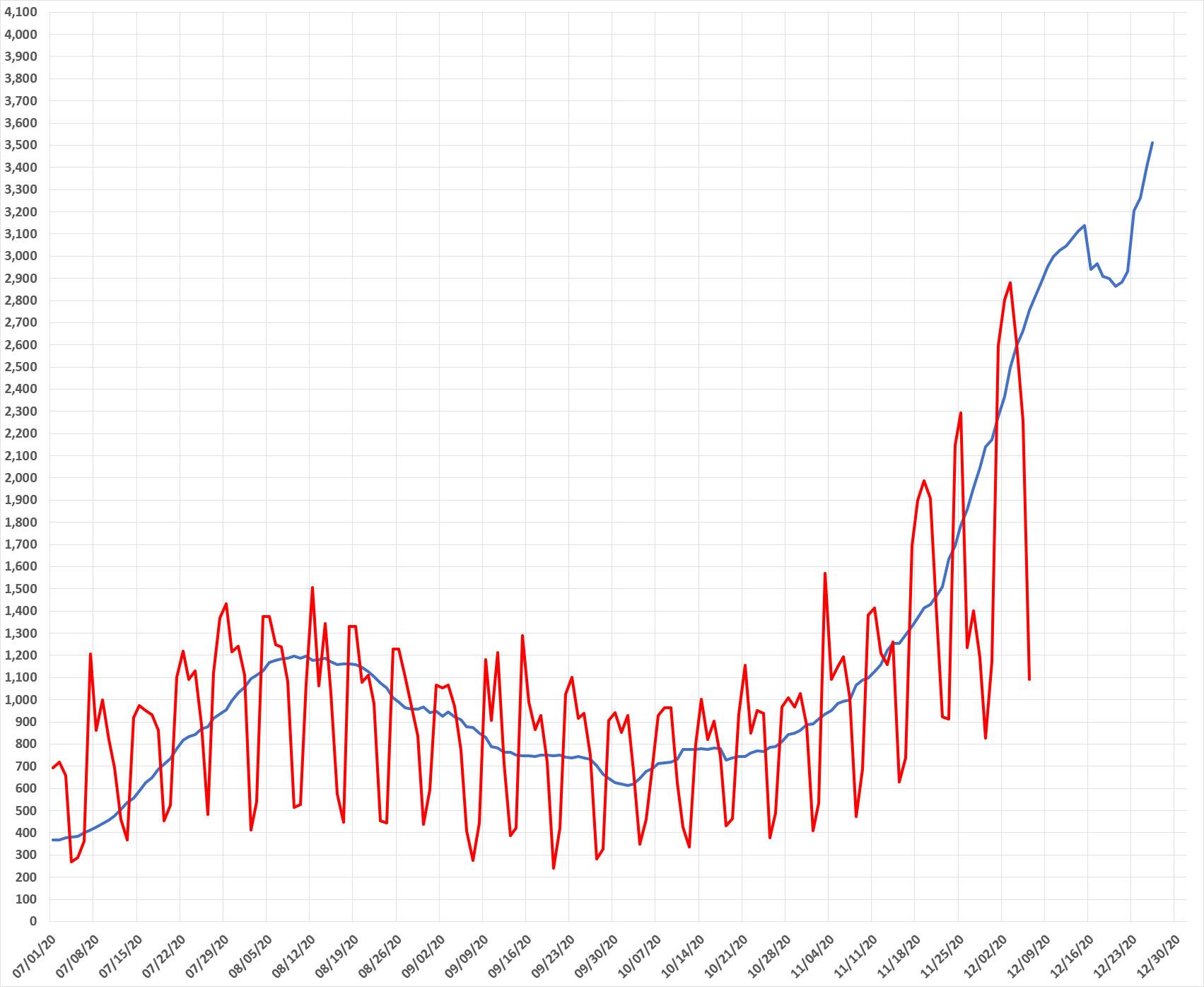 Again, just like with the cases, the death reports also tend to drop off dramatically over the weekend. Let's clean it up by again running a rolling 7-day average: 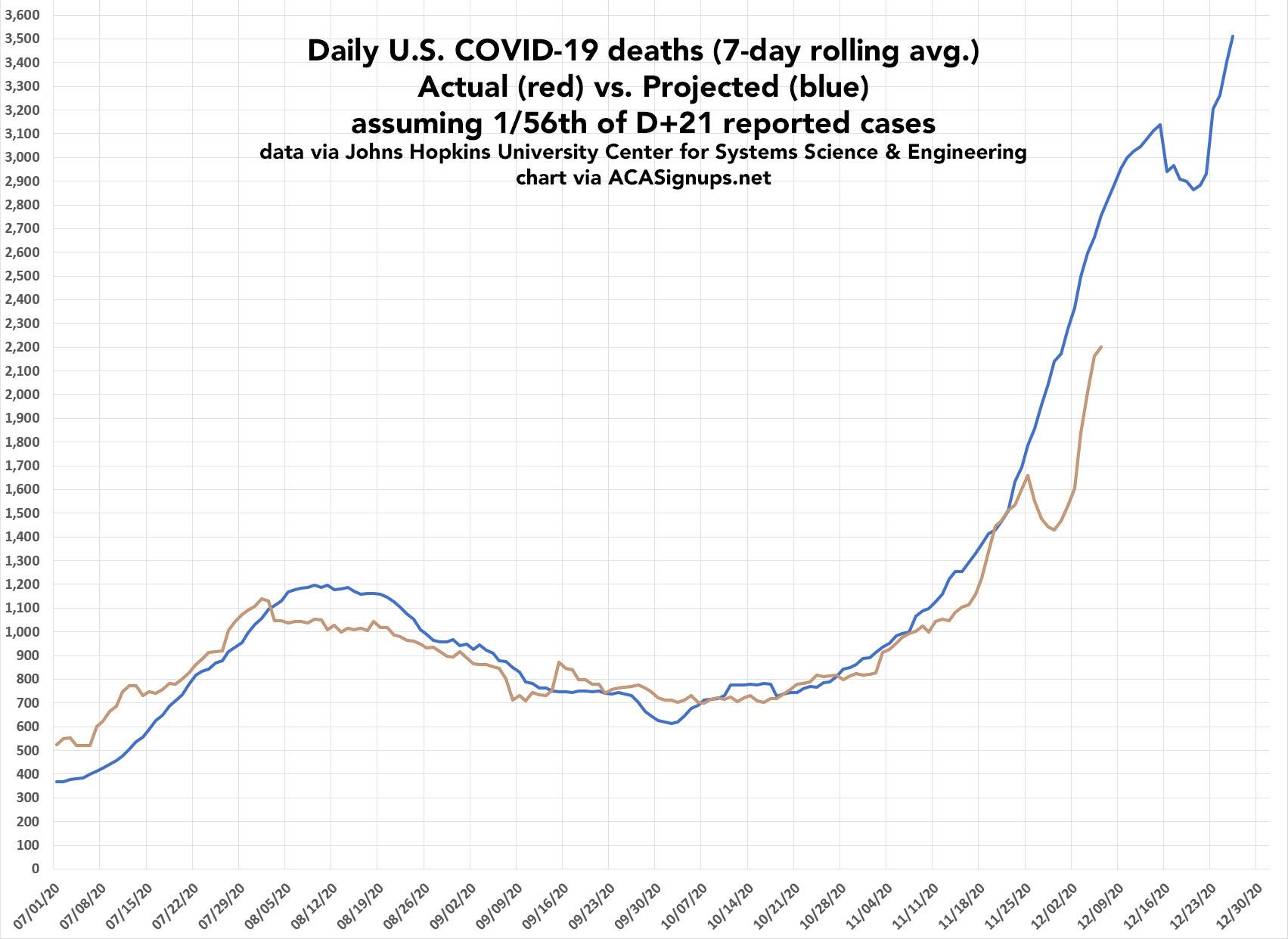 And of course, this assumes that the Case Fatality Rate (CFR) doesn't get any worse...which it likely will over the next few weeks since hospitals are getting completely overwhelmed in nearly every state right now.

Note: That Thanksgiving reporting drop-off really messed things up. I don't know if some deaths from a week and a half ago still haven't been reported or what, but if it turns out there has been a significant drop in the CFR (from ~1.8% down to, say, 1.5%), the model would look more like the chart below, which is much closer to the actual reported deaths over the past 10 days. This would be great news as it would mean around 20% fewer people dying each day.

We'll have to see, however: 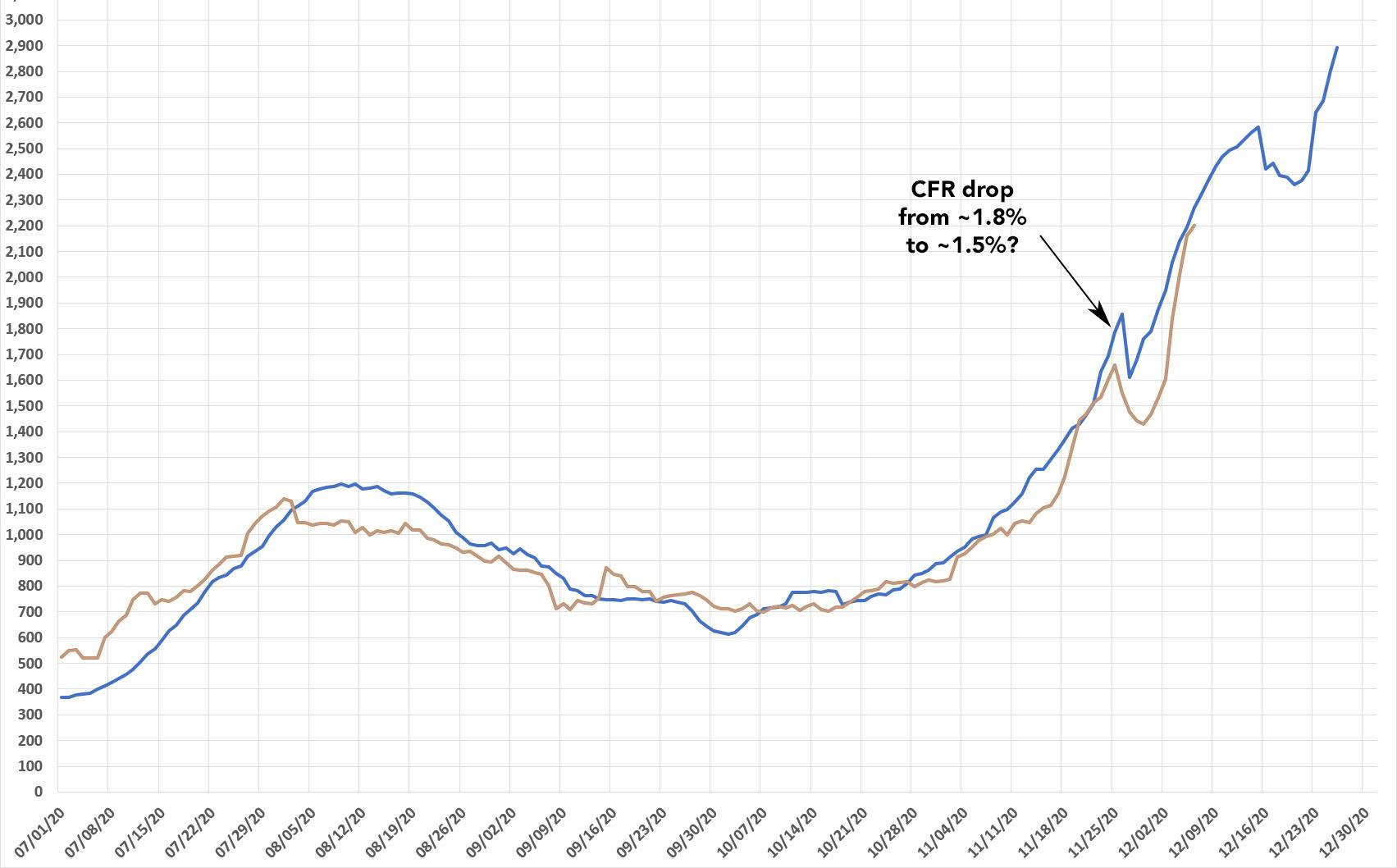