Colorado: 93,000 Coloradoans have gained Medicaid coverage in the #COVID19 era thanks to #ACA expansion

I've decided to take a closer look at individual states. The graph below shows how many Coloradoans have been actively enrolled their Medicaid expansion program: 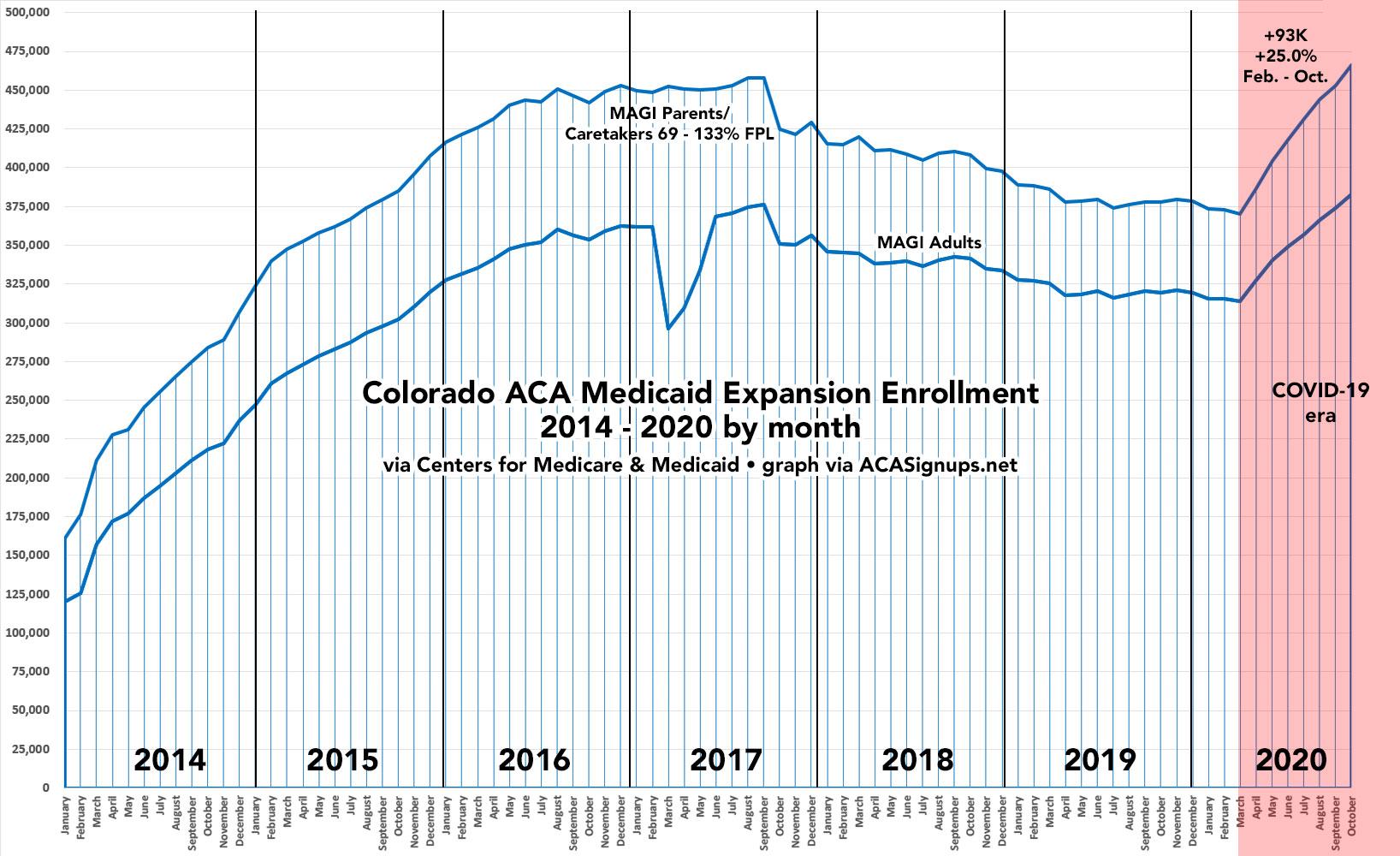 From what I can tell, Colorado's Medicaid prior to ACA expansion had some sort of partial expansion for parents/caretakers of children under 18 earning up to 107% of the Federal Poverty Level (FPL) which required them to recategorize a portion of that population into a separate category in order to comply with ACA expansion, which makes all adults (whether they have children or not) eligible if they earn up to 138% FPL (it's technically 133% FPL, but there's a 5% "disregard" which makes it effectivley 138%):

To align with federal requirements and to fully implement the Modified Adjusted Gross Income (MAGI) income conversion for this population, the Federal Poverty Level (FPL) income eligibility standard for the Parent/Caretaker Relative category will be changed from 107% FPL to 68% FPL. Section 1902(e)(14)(E) of the Affordable Care Act requires states to submit to the Secretary of the U.S. Department of Health and Human Services for approval its proposed MAGI-equivalent income eligibility standards and the methodologies and procedures that support those proposed standards, for each applicable eligibility group or “MAGI Conversion Plan.” The Department obtained approval from the Centers for Medicare and Medicaid Services (CMS) through the State Plan Amendment (SPA) process for this change in August 2013. The approved converted income eligibility standards for each eligibility category are identified within each of the respective program SPAs. These can be located on CMS’ website at Medicaid.gov. Implementation of the MAGI Conversion Plan was completed in two phases. The Department is currently working to update the rules to reflect this change and system changes have been made to reflect this change.

The effective date of the FPL change is April 1, 2015. A mass update for all Parent/Caretaker Relative cases will occur and the new FPL income eligibility standard will be applied at that time. If an individual is no longer eligible for any Medical Assistance program, the individual will receive a Notice of Action and may qualify for a special enrollment period through Connect for Health Colorado Marketplace due to a loss of Minimum Essential Coverage. Training has been provided for CBMS users by the Staff Development Center on March 16, 2015.

...Are parents and caretaker relatives between 69% and 107% FPL losing their eligibility for Medicaid?

It is expected that a small percentage of parent and caretaker relatives will no longer be eligible for Medicaid. All parent and caretaker relatives will have their eligibility reevaluated based on the new Parent/Caretaker Relative category FPL effective April 1, 2015. Those individuals that have income between 69% FPL to 107% FPL, who are not on Medicare, and are between ages 19-64 will move to the MAGI Adult category.

I don't understand everything about this, but it appears to mean that there are two categories of ACA expansion enrollees: Adults without childern under 18 earning up to 138% FPL, and parents/caretakers earning between 69 - 138% FPL.

In any event, since February 2020, Colorado's Medicaid expansion enrollment has increased by over 93,000 people and is now 25% higher than it was just before the COVID pandemic hit the U.S. This is a total of 486,000 enrolled in the program today.

When you include the ~123,000 enrolled in subsidized exchange plans, that's a total of 609,000 Coloradoans who would lose healthcare coverage if the ACA is struck down by the Trump/GOP lawsuit, or 10.6% of Arizona's population.

UPDATE: I spoke to Louise Norris, who's not only an expert on the ACA and most things health insurance related but who actually lives in Colorado, about the odd "MAGI Parents/Caretakers" confusion above, and she explained a lot of it to me, but remains confused herself about some aspects of it:

I've never really dug into that level of the specifics of our Medicaid eligibility, so I'm not an expert on this by any stretch. But this slide deck seems to shed some light on it.

However, it looks like Colorado had already started to get the enhanced federal match for the parent/caretaker population up to 107% FPL prior to the 2015 change, so that wouldn't have made a difference. That's explained in the page you linked in your post.

I'm not sure how the enrollment numbers play out. The state was already covering parent/caretakers up to 107% (KFF says 106%) starting in 2011.  So although those folks transitioned to regular adult MAGI Medicaid expansion, would they be considered newly-eligible expansion enrollees if it was just a transition from one group to another?