UPDATED: Arizona: How nervous should residents of Pinal County be right now?

Amidst my Aetna Postapalooza yesterday, there's one important point which other outlets have brought up which I haven't addressed yet: Pinal County, Arizona.

Since participation in the ACA exchanges has always been voluntary for carriers selling ACA-compliant individual policies (except for the District of Columbia (and until recently, Vermont), where carriers are legally required to only sell individual policies via the exchange), there's always been the danger that sooner or later there might be a situation where no carriers are selling on the exchange. Not "a few", not "only one"...zilch.

In my mind, I've always thought of this problem in statewide terms; it wasn't until 2015 that I even realized that many carriers only sell policies in some of the counties in a given state, not all of them. That makes the list of 300+ exchange carriers nationwide a bit misleading; some of the carriers listed for a given state might only be selling in a few or just a single county, making the scenario above far more likely to happen.

Well, with Aetna's announcement this week, it just did:

Aetna was the only insurer planning to offer Affordable Care Act plans in Pinal County for 2017. It currently only sells in Maricopa County but had planned to expand to Pinal County.

Blue Cross Blue Shield of Arizona and UnitedHealthcare currently cover about 8,500 people in Pinal County. But United is pulling out of Arizona and Blue Cross is not offering plans there next year.

Arizona Insurance Department spokesman Stephen Briggs said Tuesday that Blue Cross filings would allow it to offer Pinal County plans. A Blue Cross spokeswoman could not immediately comment on whether the company might consider doing so.

Pinal County residents will have some off-marketplace options, but those don’t qualify for federal subsidies many receive to help pay their premiums, Briggs said.

The "some off-marketplace options" may include any or all of the following, according to the latest update to the AZ DOI filing summary: 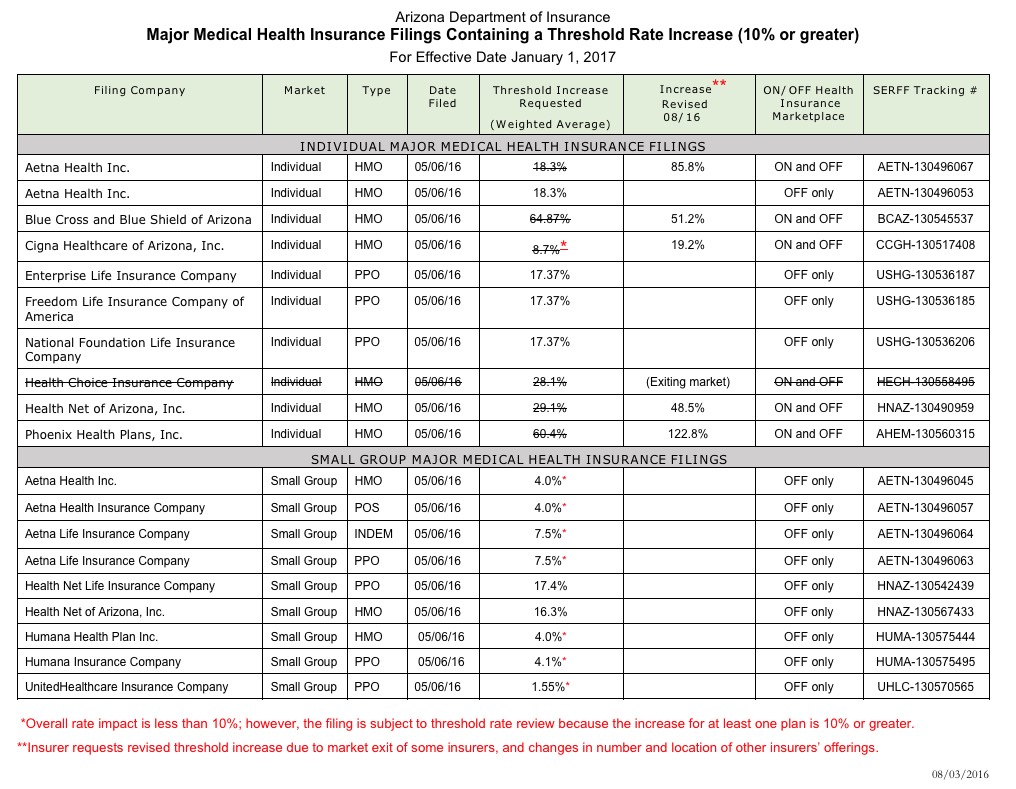 Now, Aetna is staying in Arizona's off-exchange market overall, but how about Pinal County specifically? Well, according to their 2017 rate filing (and yes, this one is specifically for off-exchange policies only...they have a second one for the now-defunct exchange-based plans), it certainly looks like it:

UPDATE: Oof. According to Rachana Pradhan of Politico, Aetna will not be offering OFF-exchange policies in Pinal County either.

Cigna's filing gives no indication of which counties they'll be available in off-exchange.

Health Net specifically says they will not be available in Pinal, as does Phoenix:

In other words, it appears that the only off-exchange choices for PInal county will be Blue Cross (maybe) and Cigna...and Cigna is only offering a single Bronze plan in Arizona even off-exchange anyway.

As for the number of people who are impacted, it's not quite as clear as the 8,500 figure in the article. According to the official CMS County-Level 2016 Marketplace Selection spreadsheet, here's the numbers as of 2/01/16 for Pinal County, Arizona:

Remember, those not receiving APTC are paying full price already anyway, so they should be able to afford to pay for a full-price off-exchange plan. That leaves the 8,521 receiving credits.

However, as of 3/31, the net attrition in Arizona had brought the effectuated enrollee number down to about 88% of their QHP selection total. Assuming this applied in Pinal County, the APTC-receiving population should be down to no more than 7,530 by now...and likely a bit lower, since that was in March. Assuming a similar net attrition rate to last year (exchange enrollment ended the year about 25% lower than it started...8.8 million vs. 11.7 million), there will likely be only around 6,400 people still enrolled in exchange-based plans in Pinal County by the end of December.

None of this is to try and minimize the seriousness of the situation in Pinal; in addition to those 6,400 people, there are likely an equal number in the county who aren't enrolled in subsidized exchange accounts who could be...if there was an option to do so.

It sounds like the Arizona DOI is involved in serious discussions with Blue Cross, hoping to convince them to jump back onto Pinal County's exchange next year after all. For the moment, that sounds like the best short-term solution to the issue.

If not, the only option for those people appears to be full-priced Blue Cross plans and a single full-price Bronze Cigna plan.