No, Trumpsters, "more testing" isn't the reason #COVID19 is quickly turning into a Red State problem. 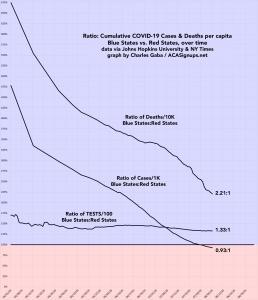 Last week I noted that there's a damned good reason for tracking the spread of COVID-19 across the country on a partisan (red state/blue state) level: Federal (and in some cases, state) policy is being based on it:

As sickening and disturbing as this may be, you can't avoid an ugly reality by pretending it doesn't. The bottom line is that the Trump Administration sees everything through a partisan political lens. EVERYTHING. As long as they think more Democrats will suffer and die from COVID-19 than Republicans, they'll either avoid doing anything to fight the virus or will do the bare minimum to make it look like they're doing so.

Actually, it's even more Orwellian than that: As long as they can make Trump supporters think that more Democrats are suffering and dying than Republicans, they'll keep on their present course.

With this in mind, I've been tracking the spread of the virus across every state on a daily per capita basis, both in cases per 1,000 residents and deaths per 10,000 (I use the different scales to make it easier to see the trendlines of each on the same graph). Here's where things stand as of today, with all 50 states + DC grouped into Blue States, Red States and Swing States. The definition of "Swing State" is a bit arbitrary; I've picked the nine which have been traditionally considered to fall into that category, along with Arizona and Georgia, the "new sun belt" swing states: 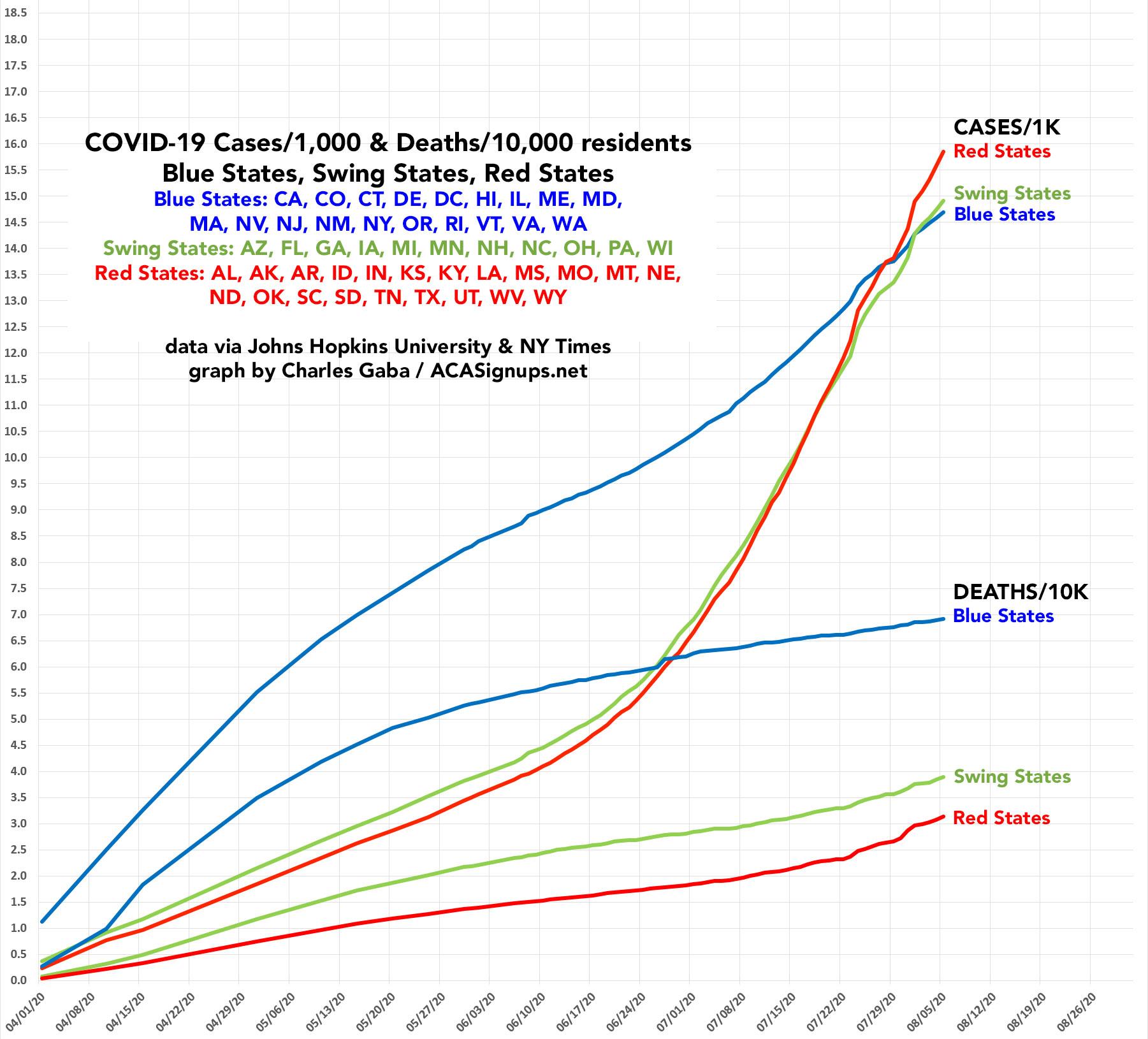 Some folks have suggested that the shift might be due to the Red states massively ramping up their testing rates...after all, if the Red states suddenly start testing at twice the rate as the Blue states, it would be reasonable to see their positive COVID-19 case levels increase faster. This is a fair question, so I decided to check. I plugged in the daily cumulative test results for all 50 states + DC from the COVID Tracking Project, grouped those into the same Red/Blue/Swing state categories shown above, and plotted the ratio between the Blue and Red states just as I do for Cases and Deaths.

Lo and behold, it turns out the opposite is true: The Blue states not only started out testing at a higher rate (which made sense back in March/April), but they're still testing at around a 33% higher rate than the Red states even today. The gap is starting to shrink, but very, very slowly.

It's also possible that some states are testing different demographic groups at a higher rate than others: If the red states are testing a much higher percentage of elderly nursing home residents than the blue states are, for instance, that would likely skew the ratio their way, and so on.

Assuming these are nominal factors, however, the trend is clear: COVID-19 is quickly becoming more of a Red State problem than a Blue State problem even though Blue States are testing residents at a higher rate: 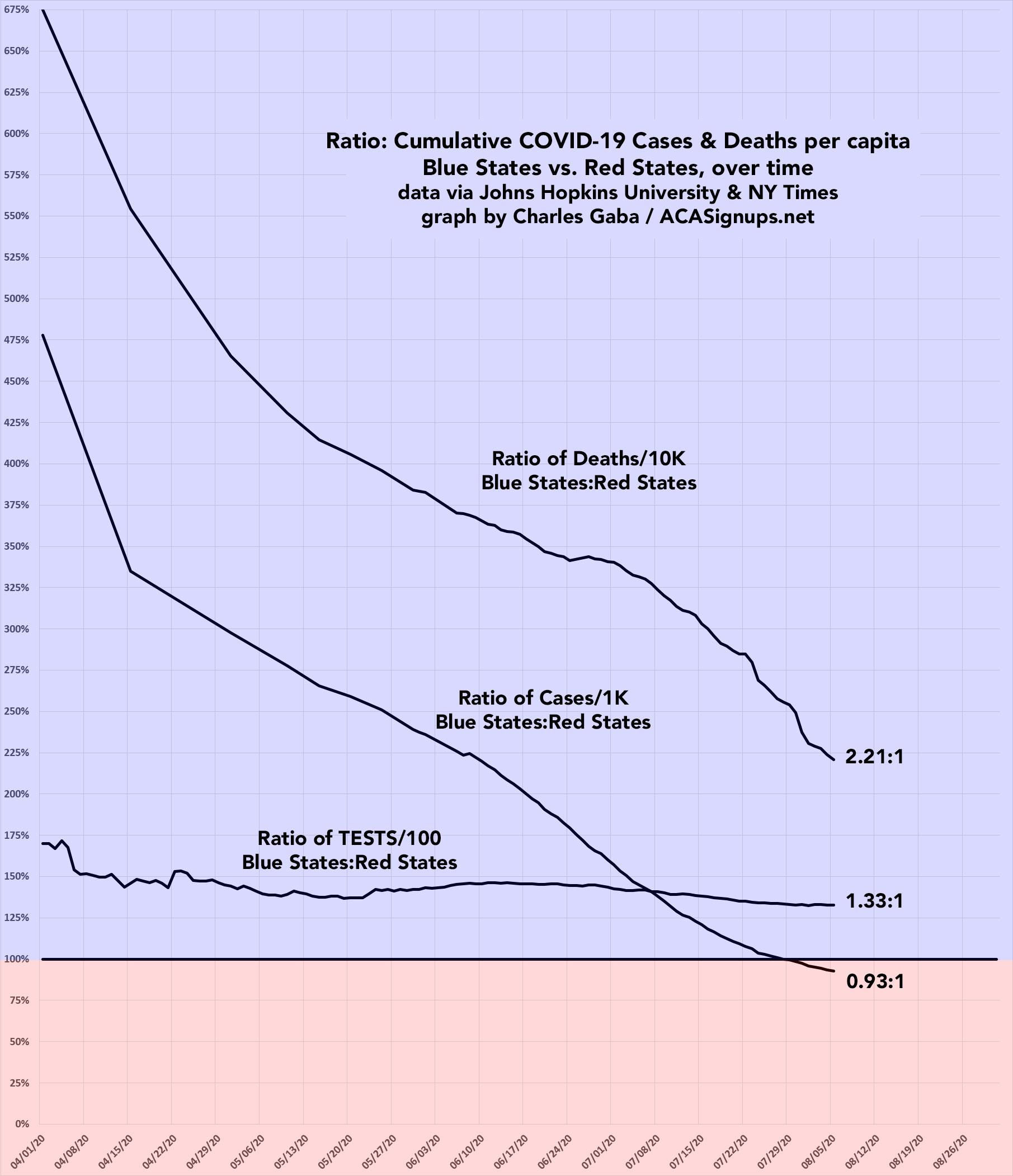