Over a year ago, I wrote an analysis of H.R.1868, the House Democrats bill that comprises the core of the larger H.R.1884 "ACA 2.0" bill. H.R.1884 includes a suite of about a dozen provisions to protect, repair and strengthen the ACA, but the House Dems also broke the larger piece of legislation down into a dozen smaller bills as well.

The official lead sponsor of H.R.1868 is Rep. Lauren Underwood (IL-14). While it currently only has 39 cosponsors, the larger H.R.1884 bill that includes H.R.1868 has 161 total sponsors to date, so there's strong support within the Democratic caucus.

I was originally planning on running the numbers for H.R.1868 for all 435 Congressional Districts, but that was never realistic (I ended up completing just 14 of them by January). After that, well, I got sidetracked by other projects, and then of course the COVID-19 pandemic hit...

However, I've decided to go ahead and dust this project off again. I'm never gonna hit all 435 districts, but I should be able to get a couple dozen more completed over the next few months.

Spanberger lives in Glenn Allen, Virginia, located in Henrico County, so let's see what H.R.1868 would look like for 8 different households: 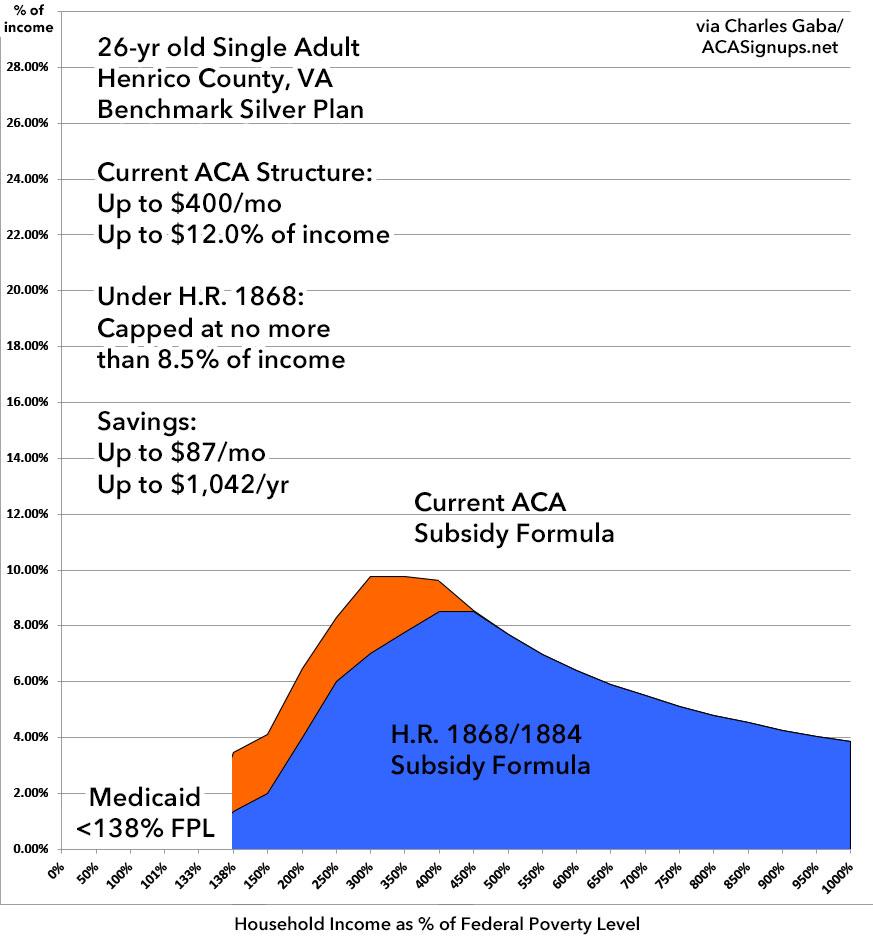 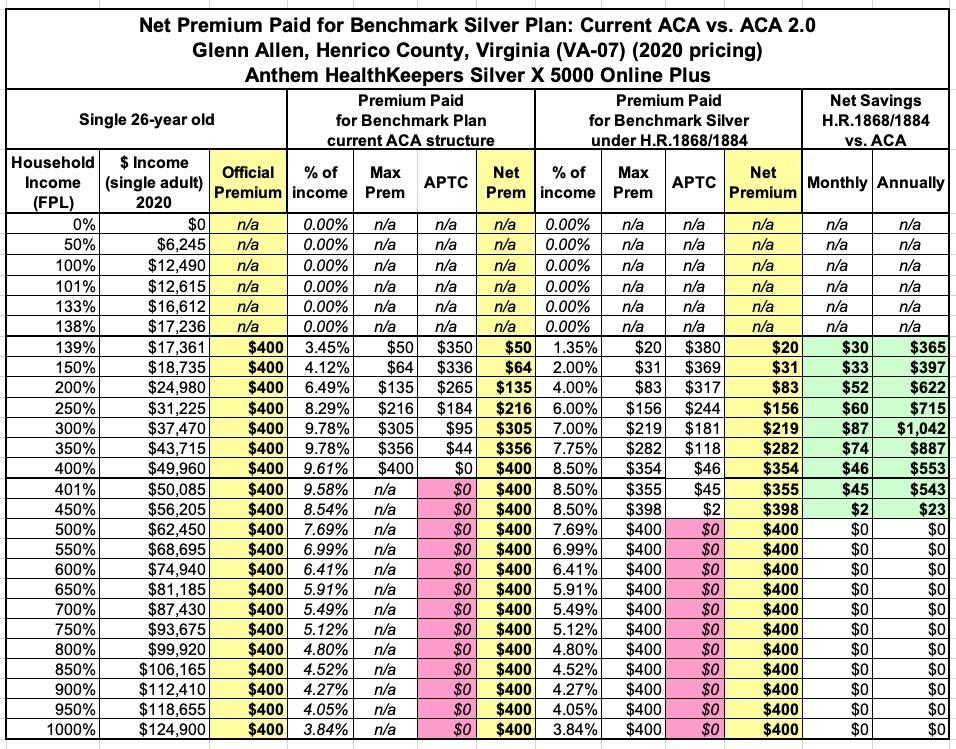 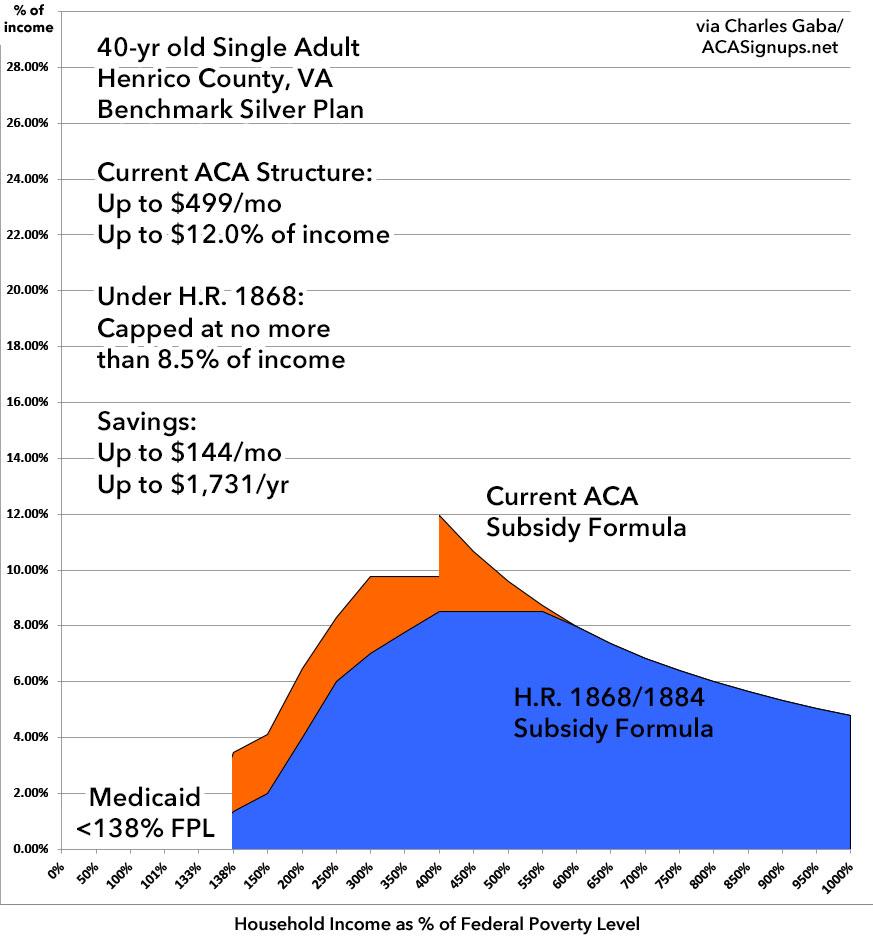 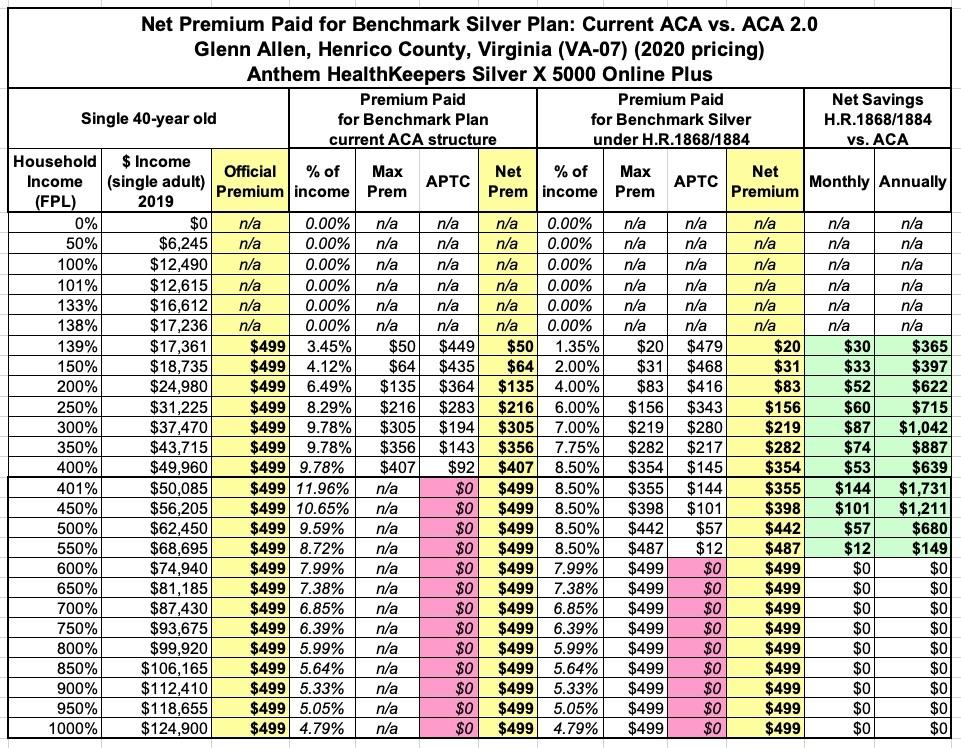 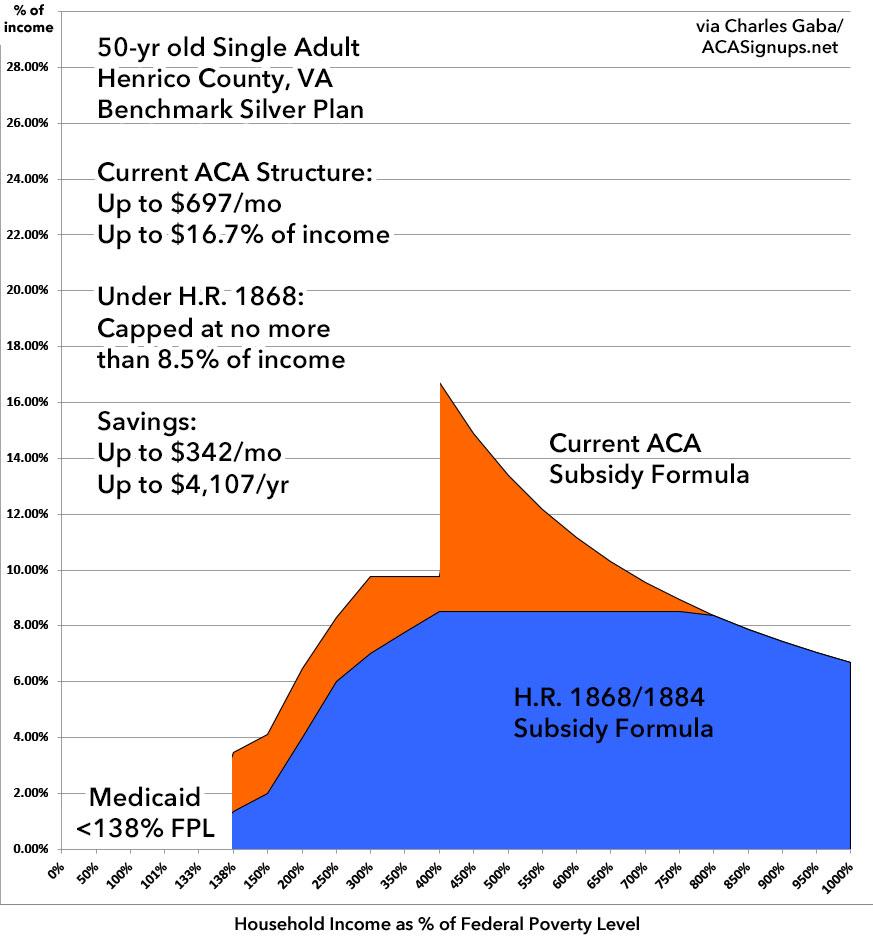 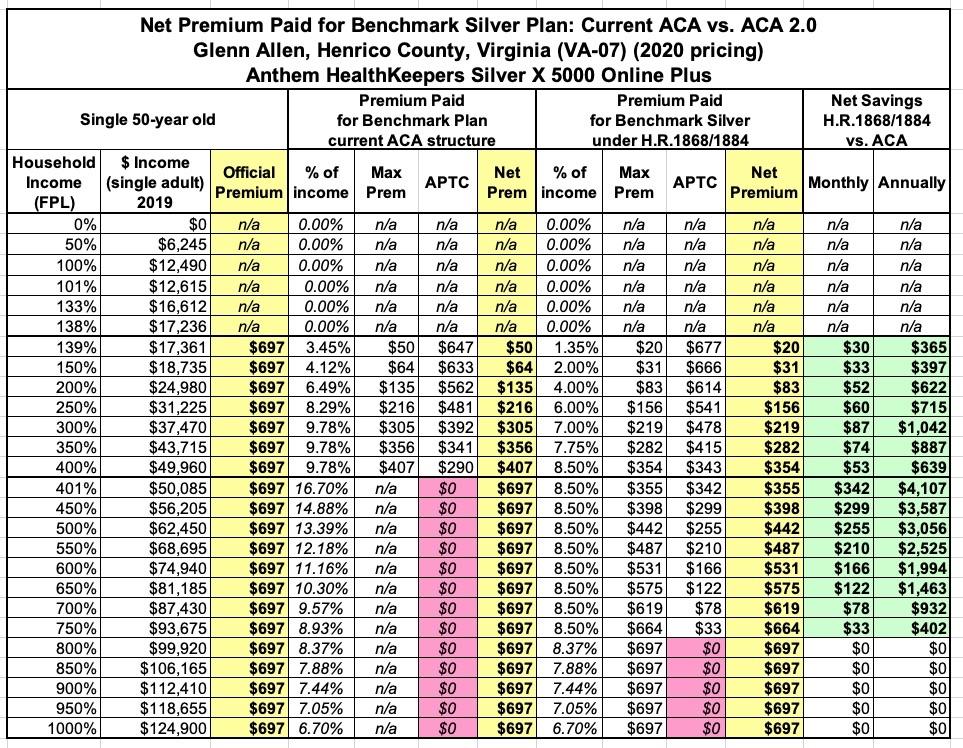 How about a 64-year old adult watching their calendar until they turn 65 and can transfer onto Medicare? Here's where the Subsidy Cliff becomes a Chasm: Under the current structure, the 64-year old would go from being capped at 9.8% of their income just below $50K/year to a whopping 28% of that as soon as their income moves even $1 over the line. Under H.R. 1868/1884, this would be reduced to no more than 8.5% of their income saving them as much as $815/month or a stunning $9,800/year: 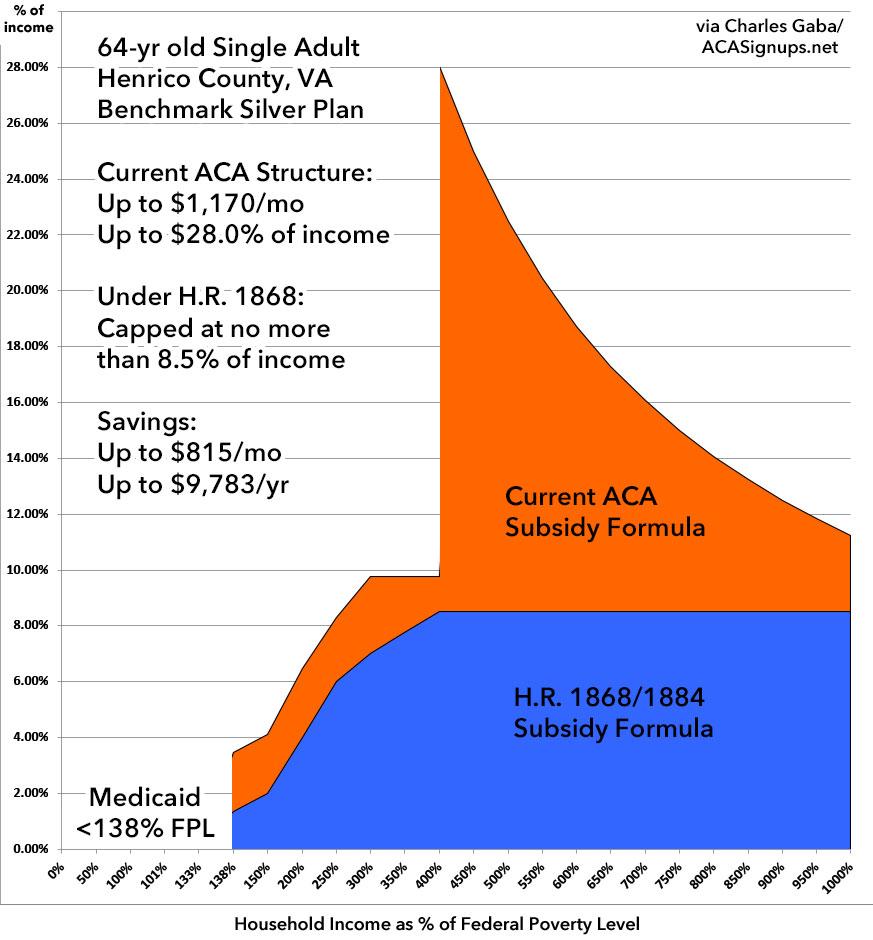 Next, let's move on to the family household scenarios. First, a Single Parent: 30 years old with one child. This gets a bit more complicated, because in Virginia, the child qualifies for the Children's Health Insurance Program (CHIP) up to 200% FPL income, but the parent only qualifies up to 138%. This means that from 138 - 200%, the kids is on CHIP while the parent is on a subsidized ACA plan. 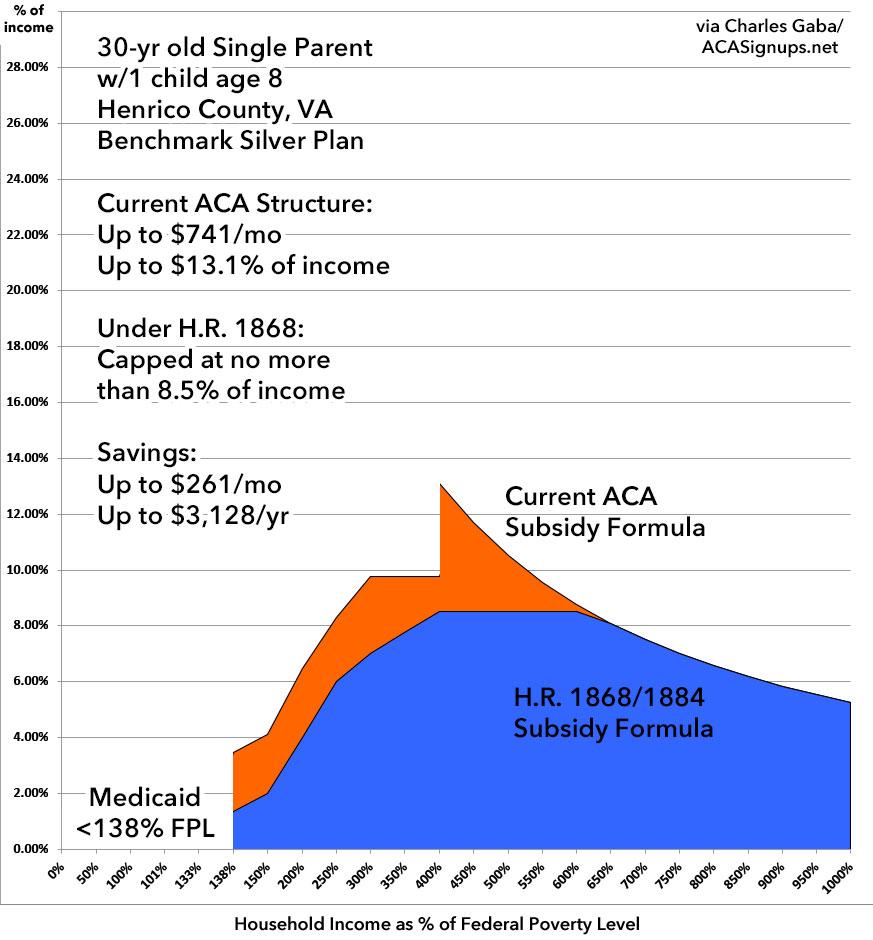 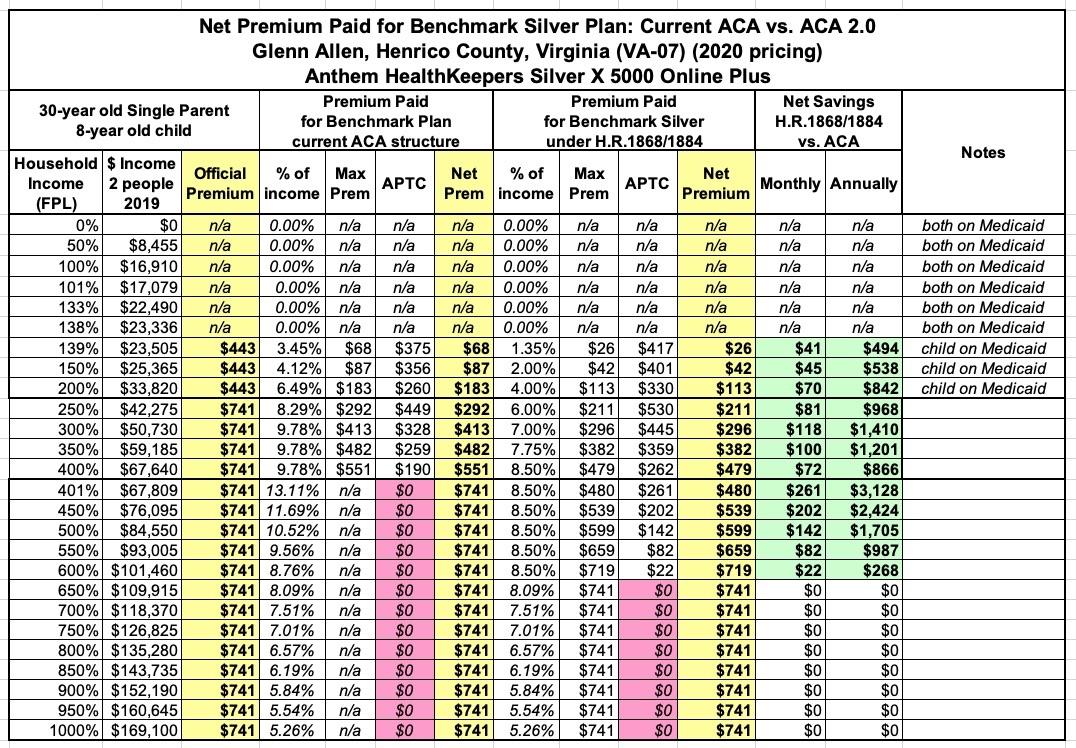 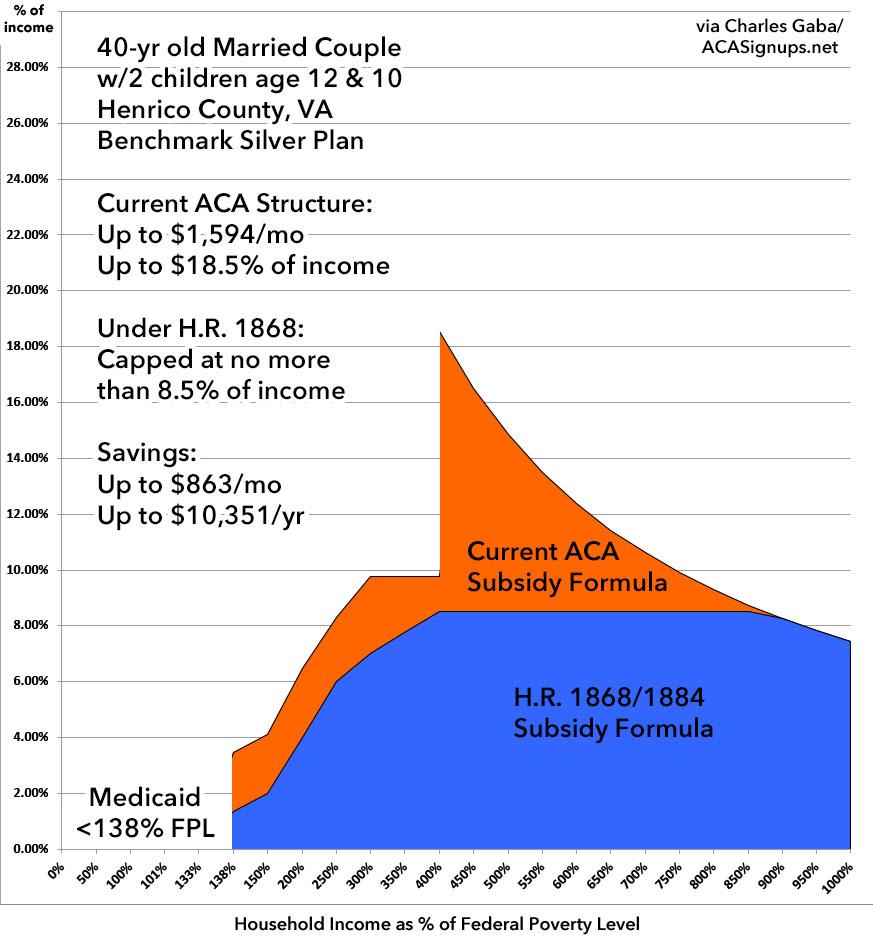 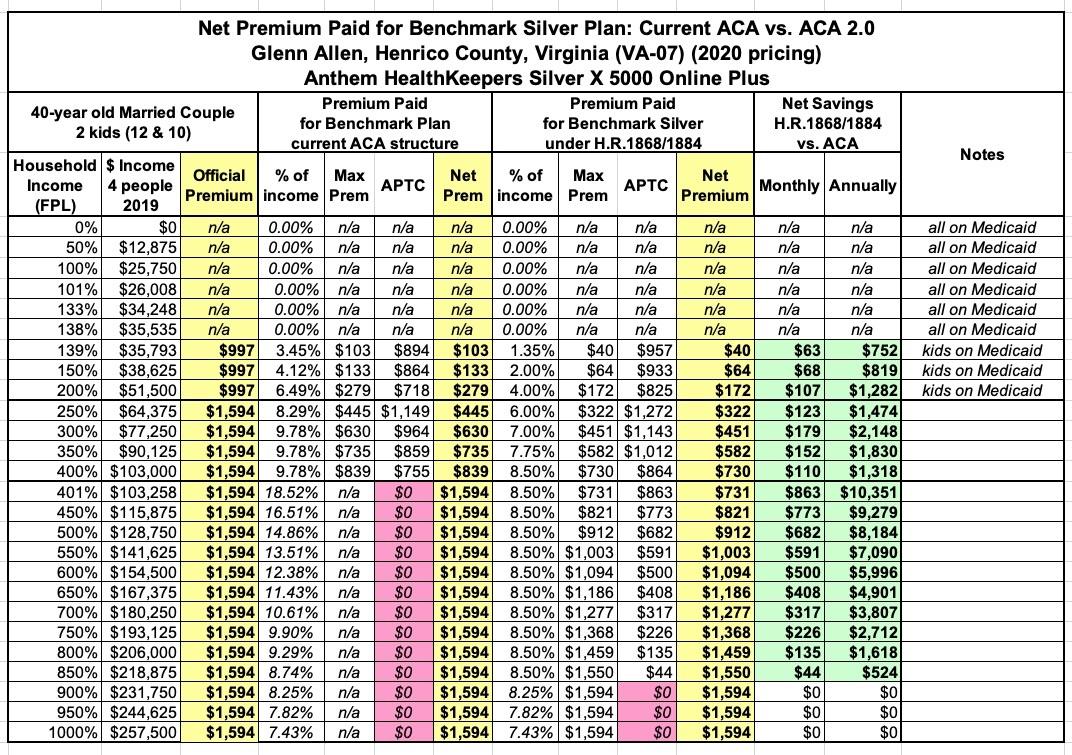 Next, let's look at a 50-year old couple who still has their adult child living with them. Thanks to the ACA, children can stay on their parents healthcare policy until age 26; let's say he's 25 years old. 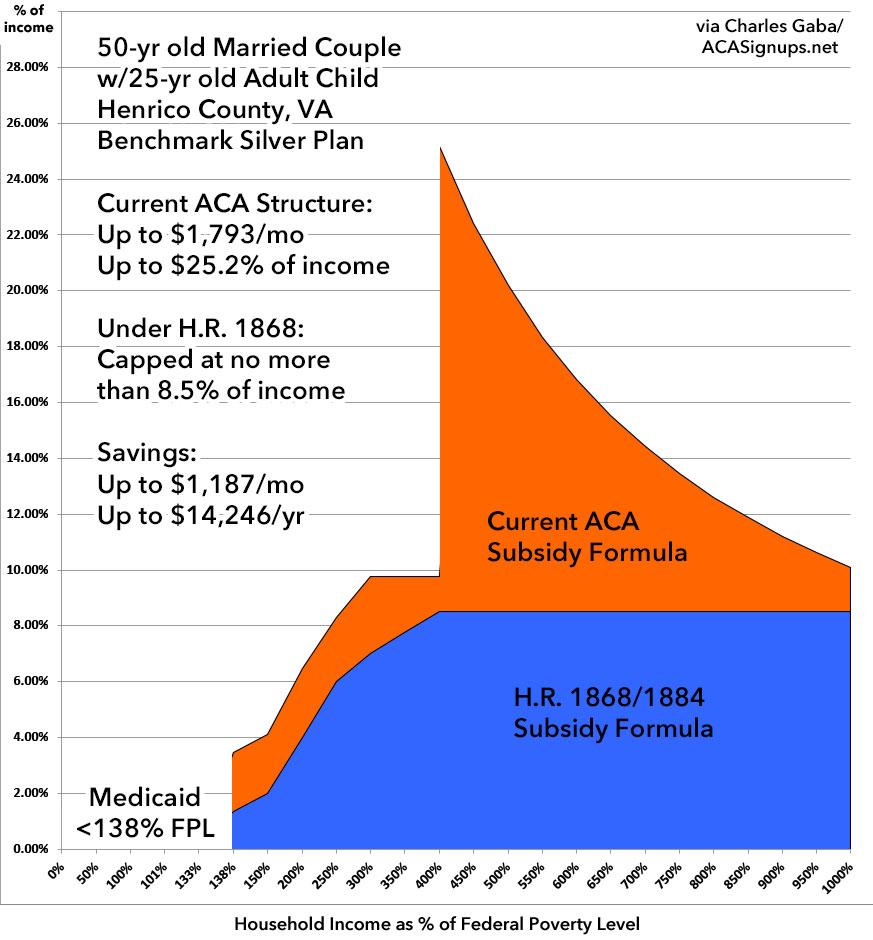 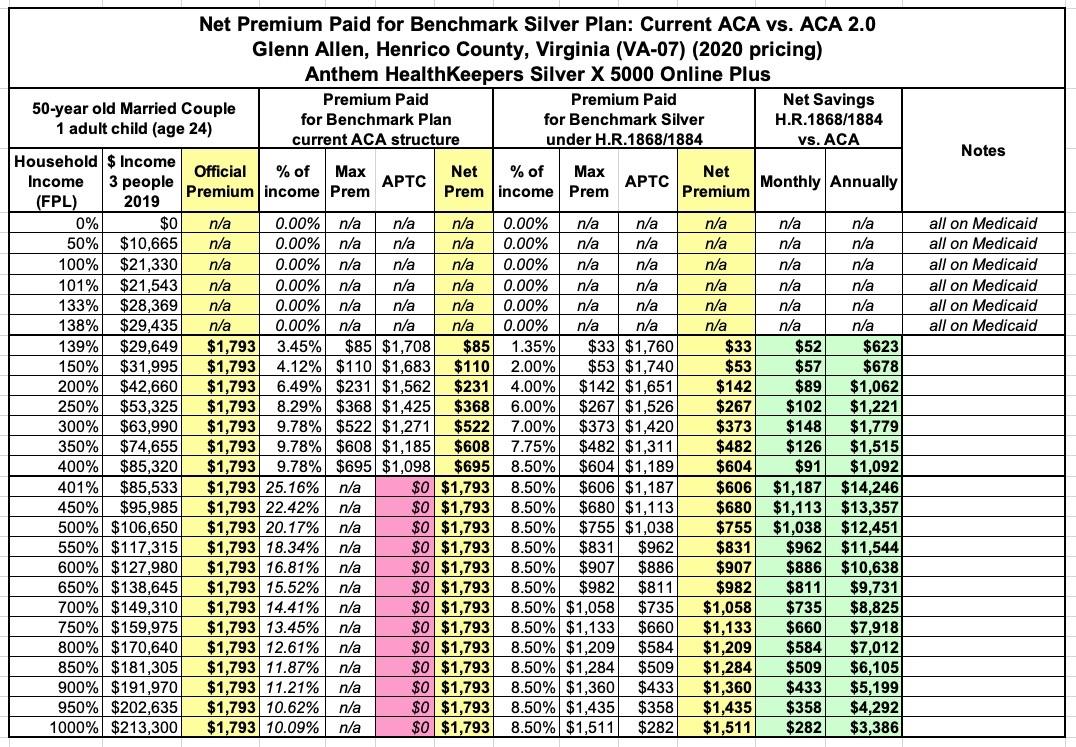 FINALLY, we come to the most obvious and brutal flaw in the ACA's subsidy structure: Older people just a few years away from Medicare. You saw how ugly it was for a single 64-year old, but it's even worse when you have a couple, since the Federal Poverty Line doesn't scale up on a 1:1 basis with the members of the household. Here's what it looks like for a 60-year old couple. Needless to say, no one earning $68,000/year can afford to pay more than 1/3 of that on healthcare premiums. HR 1868/1884 neatly solves this problem and saves this older couple up to a jaw-dropping $1,600/month or, potentially, over $19,600/year: 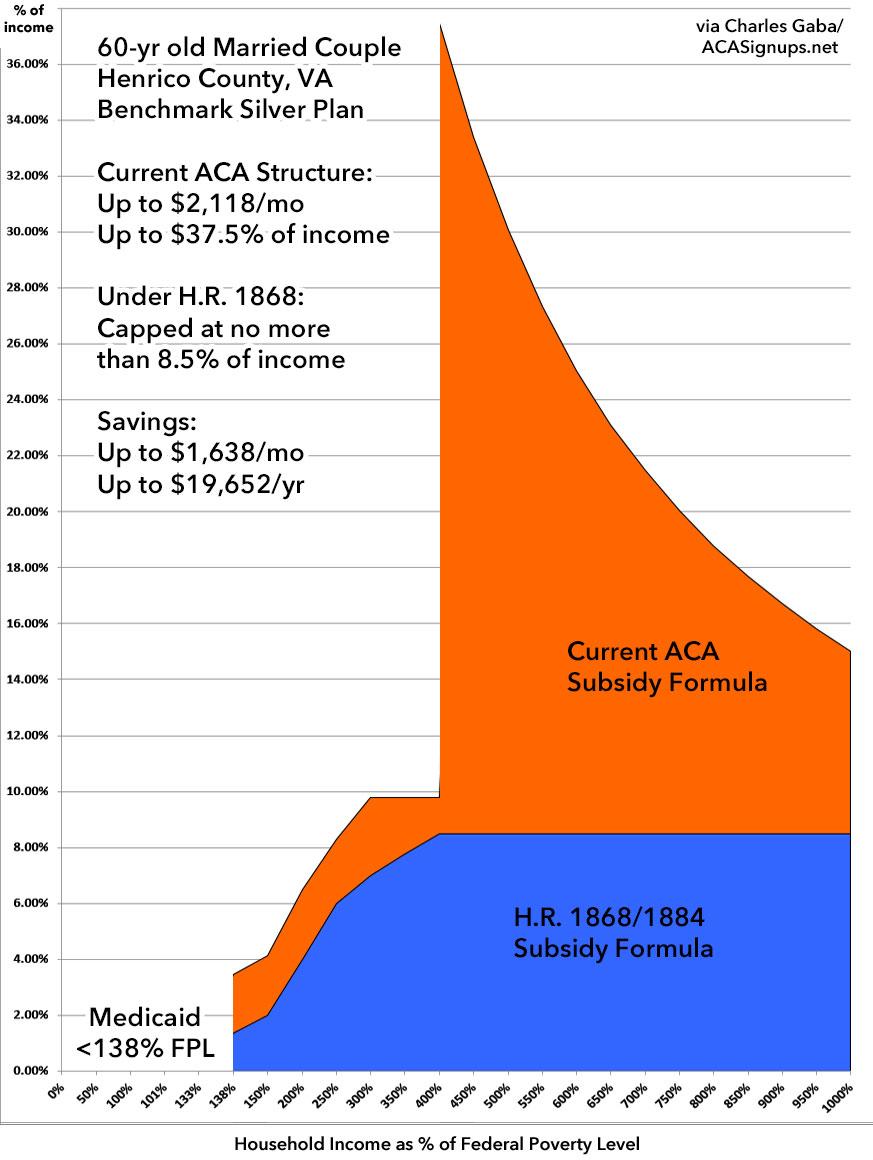 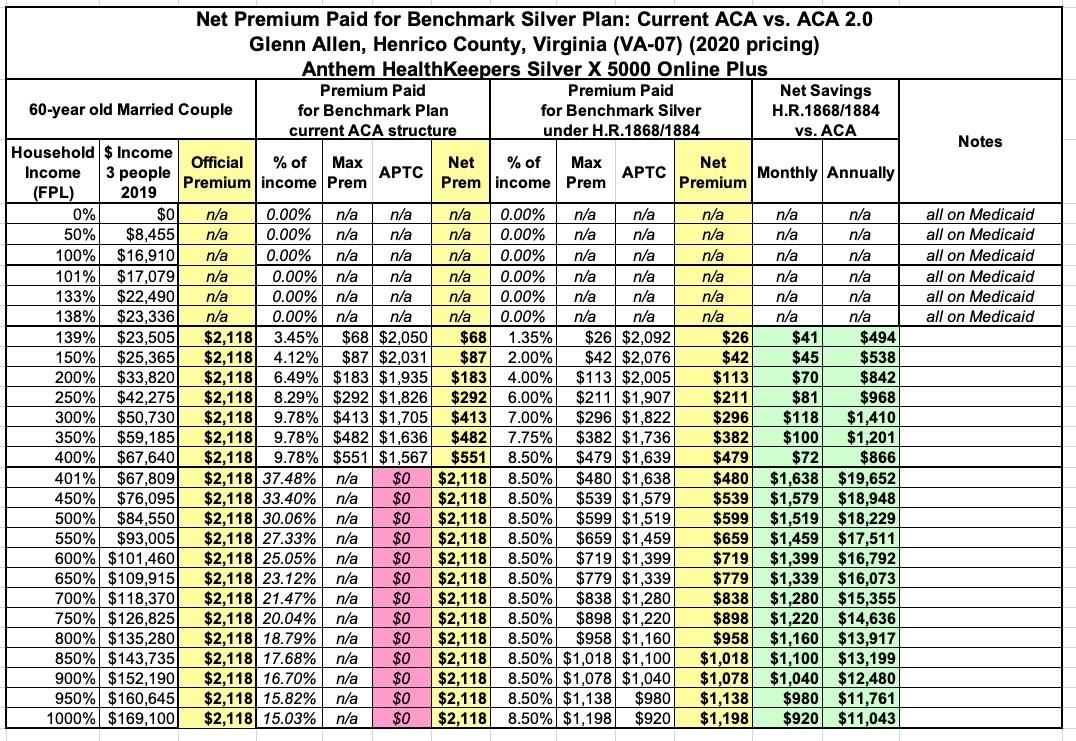