The bill Democrats are rolling out to shore up Obamacare is called the Protecting Pre-Existing Conditions and Making Healthcare More Affordable Act. I think @charles_gaba calling it ACA 2.0 is going to catch on pretty quickly.

...and, of course, my personal favorite:

There may be some additional standalone ACA 2.0 bills as well, but these are the main ones I'm aware of.

Last May, the first five of these actually already passed out of the House, while the last two (reinsurance and killing the subsidy cliff) haven't yet...and as it happens, the latter two are far "sexier" in terms of obvious impact on health insurance premiums/costs than the other five put together. It's not that the others aren't important, it's just that they deal with behind-the-scenes wonky stuff that the average person doesn't have a clue about.

I'm a huge fan of H.R. 1868, sponsored by Rep. Lauren Underwood and a few dozen other House Democrats, to the point that I actually travelled to Washington D.C. back in January and held meetings with a dozen different House staffers to try and get their bosses to sign on as cosponsors of both H.R. 1868 and the larger H.R. 1884 suite bill, with some success.

Anyway, I bring all of this up now because with the ACA's 10th Anniversary rapidly approaching, the NY Times reports that Speaker Pelosi plans on re-introducing the ACA 2.0 bill suite again (presumably with some additional tweaks and possibly a new name/branding?) (via Sheryl Gay Stolberg):

WASHINGTON — Speaker Nancy Pelosi is preparing to unveil a sweeping plan to lower the cost of health care, moving to address the top concern of voters while giving moderate Democrats who face tough re-election races a way to distance themselves from the Medicare for All plan embraced by the progressive left and derided by Republicans as socialism.

The legislation, timed to coincide with the 10th anniversary of the Affordable Care Act, is part of a major push by Democrats to position themselves as the party of health care before the 2020 elections. Former President Barack Obama will support the effort, appearing with Ms. Pelosi at American University in Washington on March 23, 10 years to the day he signed the Affordable Care Act into law.

...The speaker’s new proposal is aimed at reducing costs under the current health bill, according to people familiar with it...the speaker is expected to propose a series of steps to make health care more cost-effective under the Affordable Care Act, including expanding tax credits and subsidies to help people buy insurance and creating a national program to help cover expenses for those with medical conditions. The plan is expected to spotlight ideas put forth by vulnerable freshmen like Representatives Lauren Underwood of Illinois and Angie Craig of Minnesota.

The bit about "expanding tax credits and subsidies" also suggests that they may be reinstating the CSR strengthening provisions of the 2018 version as well, or potentially going even further and upgrading the benchmark ACA plan from Silver to Gold as Elizabeth Warren's CHIPA bill would do...although if they did that, it would be stepping even further on the toes of Joe Biden's own "ACA 2.0 w/Public Option" plan, so perhaps not (H.R. 1868 already duplicates one major provision of Biden's plan as it is). 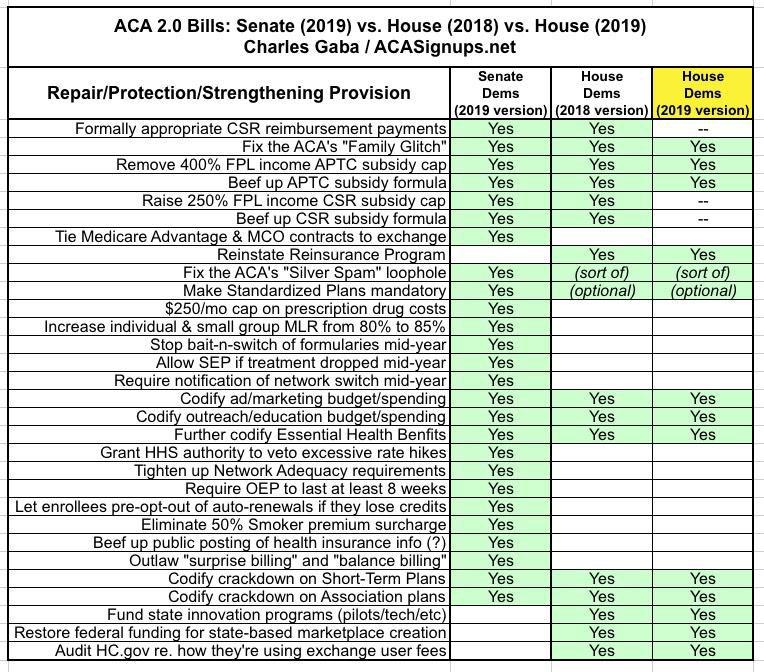 “I think it’s way too cautious an approach,” said Representative Ro Khanna, Democrat of California and a national co-chairman of Mr. Sanders’s campaign, though he added that Democrats would most likely embrace any plan that lowered costs, even incrementally.

This is a welcome statement from Rep. Khanna, especially given his gaslighting about Sen. Sanders' Medicare for All bill when it comes to the impact of the M4All bill on private health insurance.

In May, they passed legislation to reverse Trump administration rules that allowed the expansion of health care plans that did not have to comply with the Affordable Care Act’s mandated coverage of pre-existing medical conditions. And in December, the House voted to lower the rising cost of prescription drugs by empowering the federal government to negotiate prices with pharmaceutical manufacturers.

Yes, passing H.R. 3 was actually a major accomplishment...which received little attention nationally as it happened in the middle of the House Impeachment Hearings.

Towards the end, the article makes clear what I had already figured:

The legislation Ms. Pelosi is drafting is based in part on the Protecting Pre-Existing Conditions & Making Health Care More Affordable Act, a measure introduced about a year ago...

The "based in part" reference could mean just about anything, of course. For instance, just the other day, Rep. Jan Schakowsky introduced two new standalone bills which could potentially be rolled in with it:

Again, Speaker Pelosi's "new" bill still has little chance of going anywhere in the Senate under Mitch McConnell, and of course Trump would veto it if it somehow made it through anyway, but this is still a very welcome development.