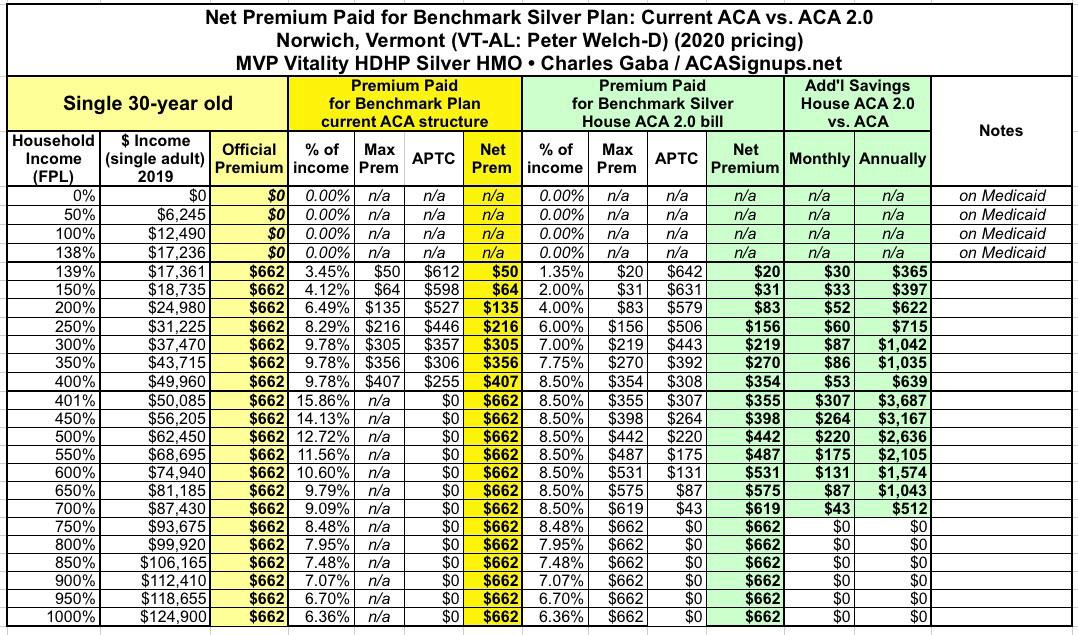 Without any subsidies, this young adult would be paying $662/month regardless of his or her income. Under the current ACA subsidy formula, they qualify for Medicaid up to an income of a little over $17,000/year. Over that their monthly premiums start at $50/mo, then gradually increase to $407/month at exactly 400% FPL...but then instantly jump to the full $662/mo. This takes them from 9.8% of their income to 15.9% the moment they hit around $50,000/year. Ouch. 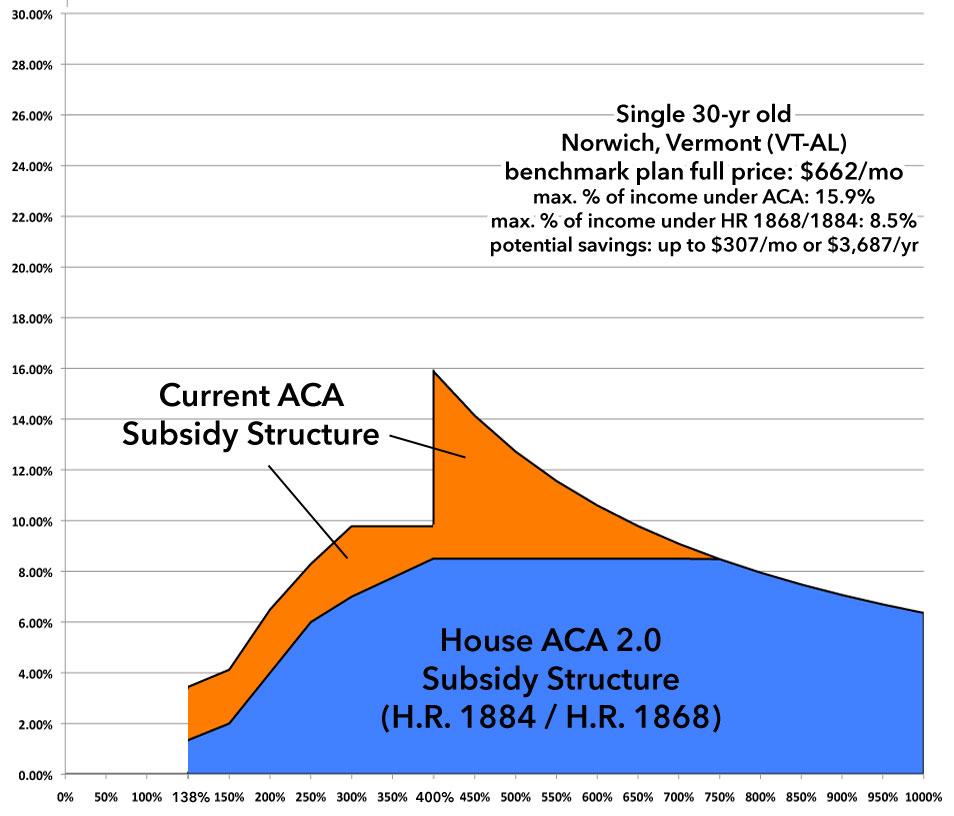 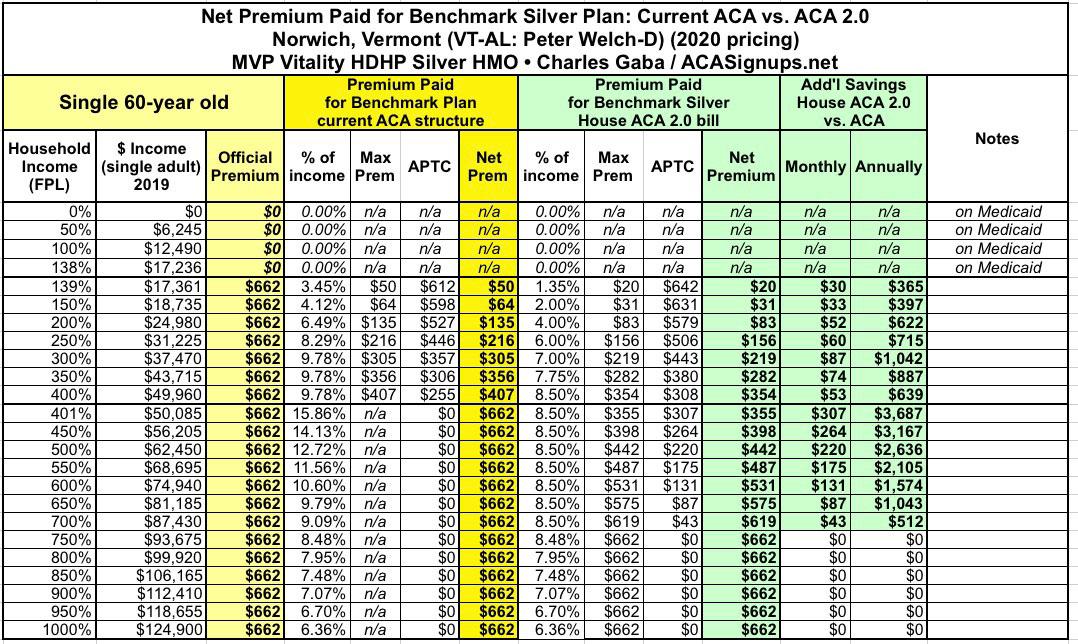 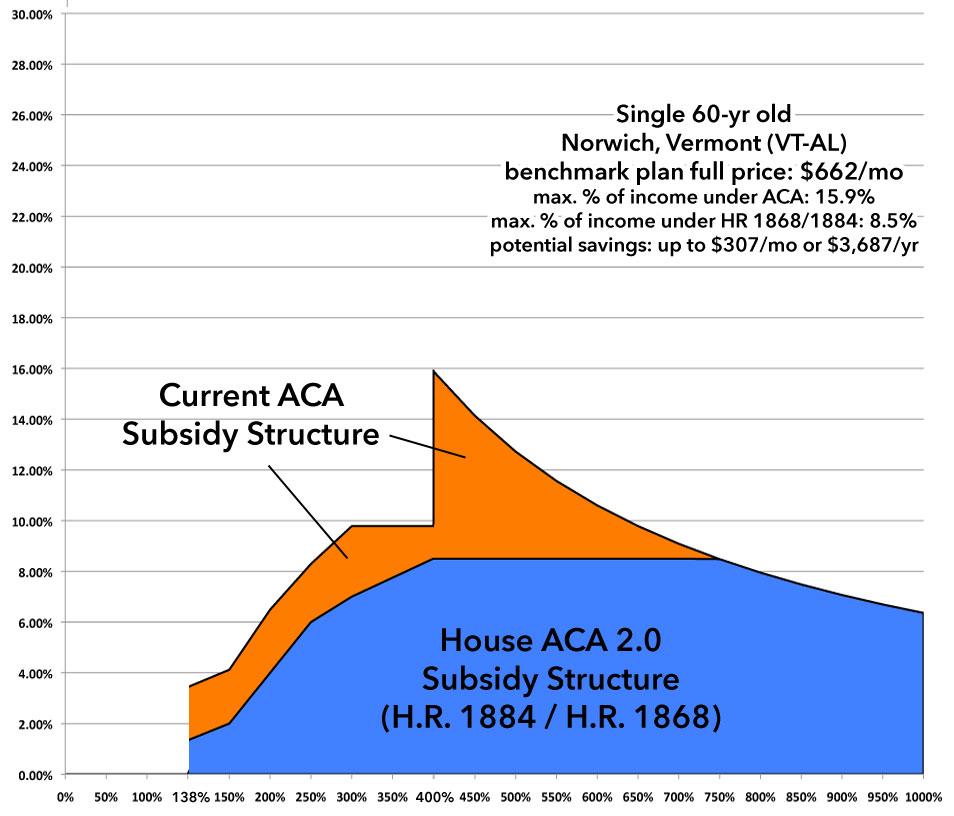 Normally I list a family of four next, but again, in Vermont it's a bit different, so instead I'll list the older couple first: 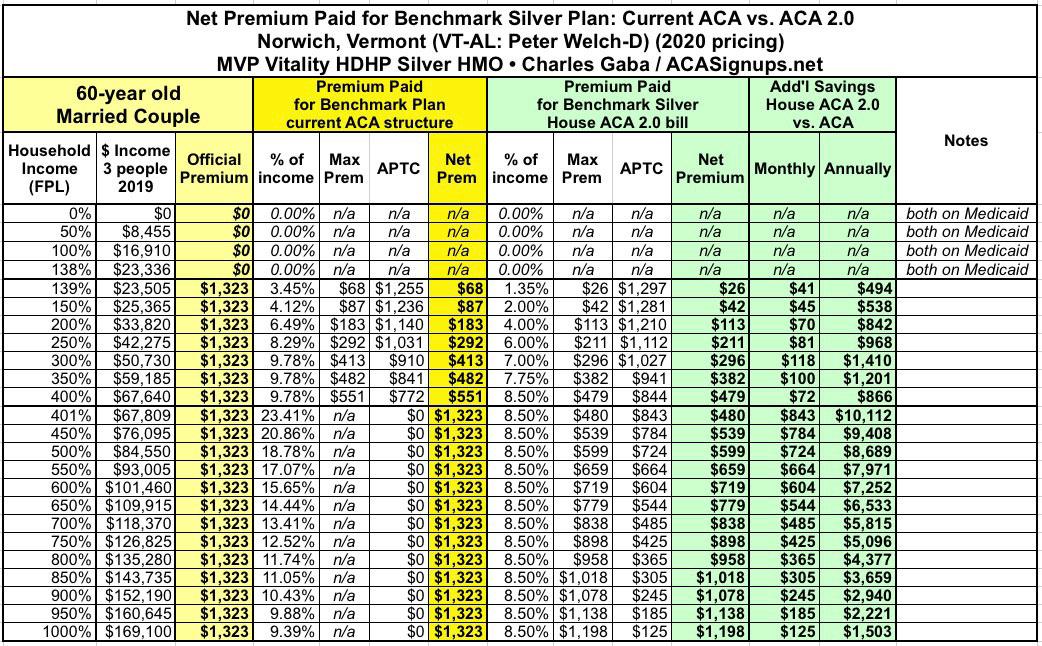 Under the current ACA formula, once this older couple hits around $68,000/year in income, at full price they have to pay as much as 23.4% of their income in premiums alone. 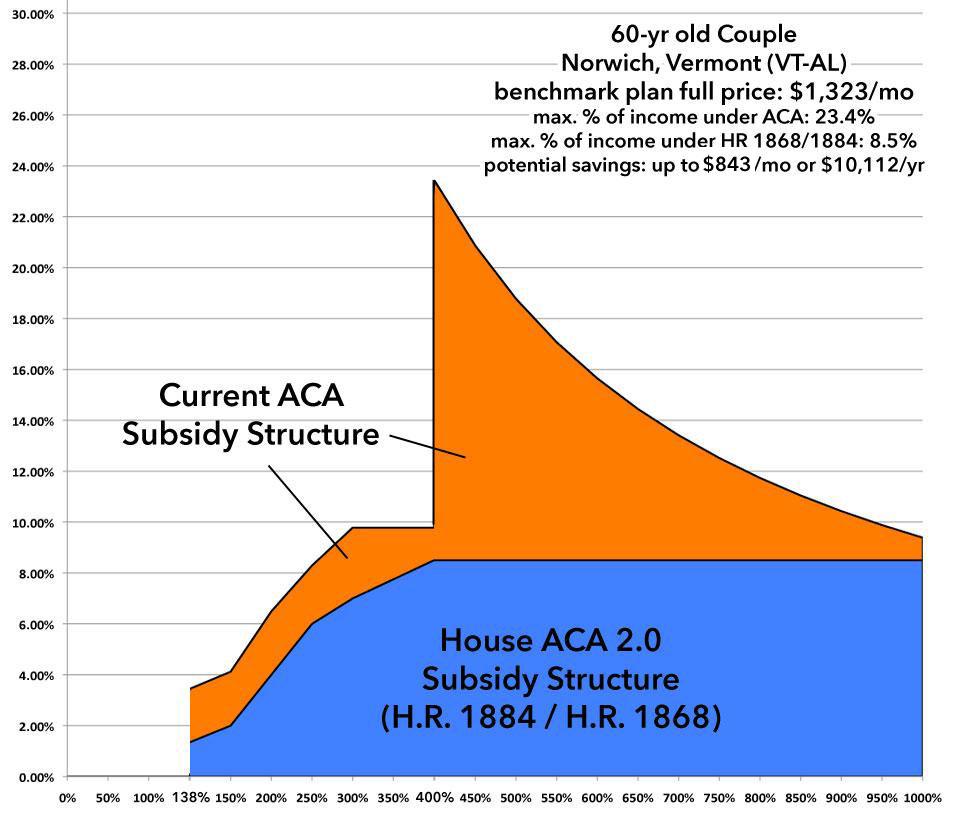 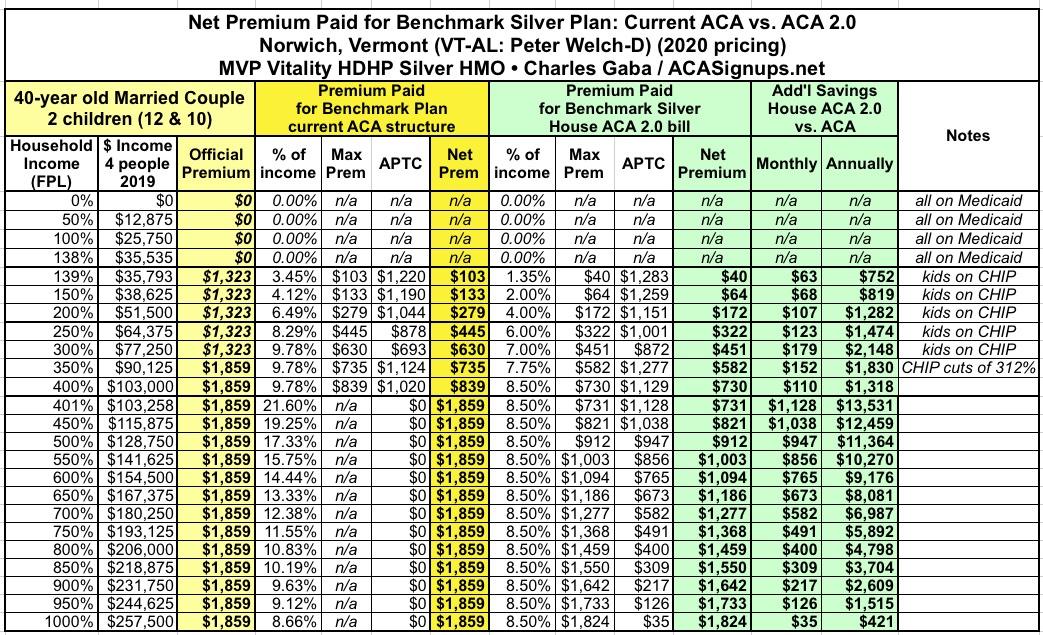 In Vermont, the kids would be on the Children's Health until the family hits 312% FPL, or $80,300/yr in income, but the unsubsidized premium for the parents only would run $1,323/mo. Up to that threshold, however, the parents would recieve subsidies limiting their monthly premiums to no more than $735/month, which isn't too bad.

The moment they break the 400% FPL threshold, however ($103,000/year), they get hit with a double blow: Not only are the kids no longer eligible for the discounted Child Health Plus program, but they have to pay full price for all four family members. Fortunately, Vermont has a special, additional age band rule which restricts premiums for households with kids to no more than 2.81x as much as a single adult, so instead of $2,646/mo, they "only" have to pay $1,859/mo...which is still up to 21.6% of their income. 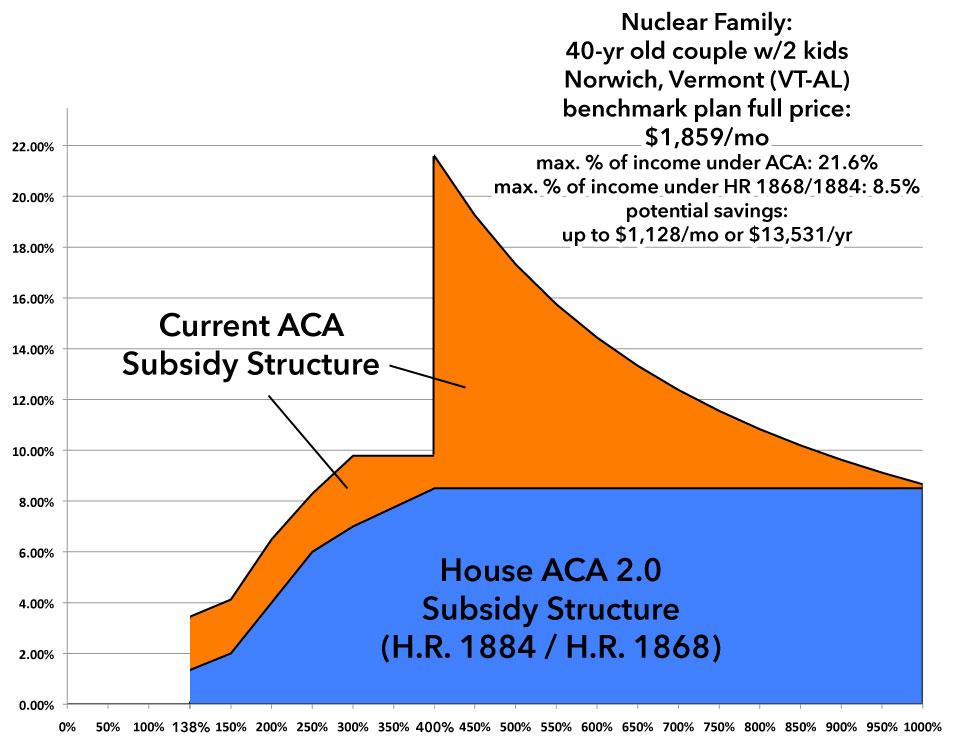