This is the primary reason why Kamala Harris' version of "Medicare for All" (before she eventually dropped out of the Presidential race) was specifically designed to include a 10-year transition period. Her rationale was that this would give unions enough time to renegotiate their contracts to account for the changed healthcare landscape which they'd be facing in a post-M4All nation.

So why are some unions, who you'd normally expect to be onboard with progressive policies, so opposed to a Bernie-style "pure" Medicare for All system?

Well, let's suppose that your union members wanted to be paid $70,000/year, but instead you negotiated $50,000/year plus a Platinum-level healthcare plan for their families worth $25,000/year instead.

Technically, their total compensation is now $75,000/year for near-100% Actuarial Value healthcare coverage (i.e., extremely close to the hypothetical M4All coverage). However, their take home gross is still $50,000 before taxes...they effectively gave up $20,000 in pay in return for a $25,000 healthcare plan, so they're happy.

Now let's say M4All as proposed by Bernie is passed and signed into law. All of a sudden everyone has the same $25,000 plan as they do without having to give up anything.

That may seem petty of the union members, but there's actually a larger problem: How much are their taxes going to increase to help pay for M4All?

The exact funding mechanism is still fuzzy, but Bernie has proposed a 7.5% employer-side payroll tax...and a 4% income tax premium on the employee for income over around $24,400/year for a married couple filing jointly. I'm not sure what impact the payroll tax would have, but the 4% income tax in this scenario would amount to roughly $1,000/year.

End result? The employee would still be being paid $50,000/year...but their Platinum healthcare plan would now become effectively meaningless and they'd have to pay an extra $1,000/year to boot.

But wait, there's more: What happens to the additional $20,000 in salary that the union negotiated away in return for the $25,000 policy? In theory, the employer would increase the employee's base salary by the full $20,000...or perhaps by $18,500, since they now have to pay a 7.5% payroll tax on the difference. However, if the union is under a 5-year (or whatever) contract, they'd be under no obligation to do so. That means the employees are effectively losing out on $20,000 in compensation for nothing for several years until it's time to renegotiate the contract.

Of course, the employee is probably paying something towards their premiums today which may cancel out that $1,000, and I don't believe even the best union-negotiated healthcare policies are as comprehensive as M4All purports to be, so in some cases the employees would likely still come out ahead anyway, or break even at worst. The math on this will vary widely depending on the union, the employee's salary and the negotiated healthcare policy they currently have.

Still, you get the general idea: Unions like this one gave up a lot to get their current high-end coverage and aren't too keen on having it all be (in their eyes, anyway) for nothing.

Here's the "Healthcare" portion of the flyer in question. It speaks for itself...and the wording distinction between the descriptions of Bernie's and Warren's (revised) M4All plan is pretty critical: 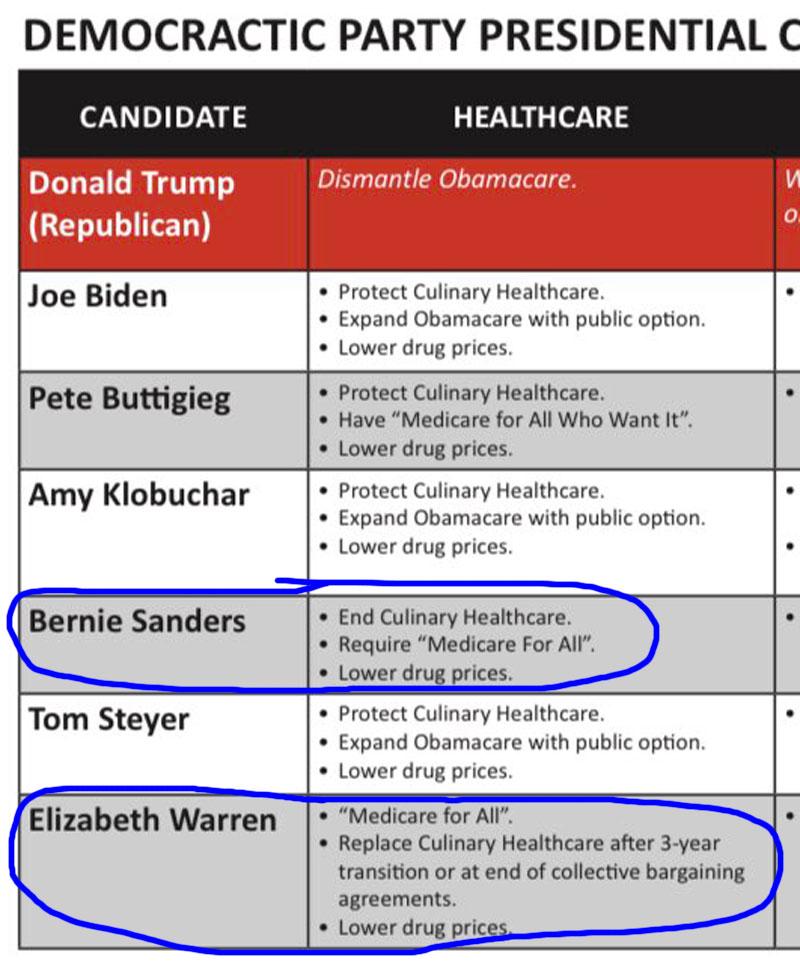