There are a lot of people here for what we all expect is a deal on Medicaid expansion between Gov. Kelly and Senate Majority Leader Jim Denning. #ksleg

Gov. Kelly says the Medicaid expansion agreement includes parts of multiple previous Dem and GOP plans. Includes full expansion no later than Jan. 1st 2021. Paid for by a fee on hospitals. She says hospitals have endorsed it. #ksleg pic.twitter.com/HHskDTQ1ee

"Full expansion" presumably means none of this "only up to 100%", "money used to pay for private ACA exchange plans" or "work requirement" nonsense, which is fantastic.

A work referral program is very different from a work requirement program. Nothing wrong with including a program to help enrollees get jobs, which in turn would hopefully reduce the number of people who need to be on Medicaid (since they'd either shift to employer coverage or earn enough to be able to afford a subsidized exchange plan), as long as they're not legally required to do so to remain enrolled.

Kelly on Medicaid expansion agreement between her and Sen. Denning: "Compromise is hard, it's messy and it's slow. But it is so worth it." #ksleg

This is blasphemy to some quarters, of course...

I'm 95% sure this is referring to an ACA section 1332 reinsurance waiver, which isn't nearly as good as expanding/enhancing subsidies directly, but it's still better than nothing.

Gov. Kelly says the agreement doesn't mean Medicaid expansion is a done deal. "Ramp up your efforts and help us bring this home." #ksleg pic.twitter.com/k2k0lzfx80

Yep. Caution is the watchword. Kansas came within a single vote of passing Medicaid expansion a couple of years ago but it fell apart anyway. It's not done until it's done.

Denning says the Medicaid agreement has 22 Senate sponsors. It needs 21 votes to pass that chamber. "This is what governing looks like." #ksleg pic.twitter.com/AsXGQaITvY

The pressure on two of the Republican members to reverse themselves will be tremendous.

Denning says hospitals will pay up to $35 million in fees to pay for Medicaid expansion under the proposal. #ksleg

Remember, the state pays 10% of the cost, so that suggests around $350 million in total spending.

The title of the press release alone is noteworthy...presumably the reinsurance program was included because the GOP insisted on premium reductions for middle-income residents in return for Medicaid expansion for low-income residents, and that's reasonable.

“This process is far from over, as there are still several critical steps to be taken by the Kansas Legislature,” Kelly said. “But today, Senator Denning and I are proud to stand together to propose a bipartisan compromise that will expand Medicaid and lower healthcare costs for Kansas families. This proposal includes elements of my plan, of Senator Denning’s plan, of the 2019 House plan, and of the bipartisan plan that passed both chambers in 2017.”

The compromise proposal includes key elements to address concerns raised from both parties, in both chambers:

Interesting...reinsurance wouldn't go into effect until 2022? Huh. I guess they think they need more time to run the numbers? I presume they can change it to 2021 if they manage to push it through quickly enough...

Heh. I mean, one person's tax is another person's fee, but still.

Wow...not only is Kansas not including a work requirement, the press release actually throws shade at the states which do (including my own here in Michigan, ahem...)

The "$25/mo" premium could be a problem, but the "up to" lends hope that it's on a sliding scale.

This is a big deal in heavily-rural Kansas, I presume.

“My top priority is to lower the cost of healthcare for Kansans across the board. We want to give as many Kansans health care coverage as we can, in the Medicaid market and the non-Medicaid market,” Denning said.

While this proposal is the most sweeping compromise offered since the debate over Medicaid expansion began in 2013, both Kelly and Denning underscored that more work remains.

“We’ll both be working with our respective caucuses in the coming days to get their feedback and buy-in,” Denning said. “But all sides can find something in this bill to like. That means it’s probably about as middle of the road as it can get."

“This compromise was an important first step, but our work is not over yet,” Kelly said. “Legislators, many of whom were here today, have the ability to bring this over the finish line in the early days of the 2020 session. I am calling on them to do just that.”

On the one hand, this sounds a bit backwards, since current 100-138% FPL enrollees on the ACA exchange would be shifted to Medicaid, but this is an additional waiver request which would--if approved--shift them right back onto the ACA exchange a year later, resulting in Kansas going to a partial-expansion status (Medicaid up to 100% FPL; subsidized ACA policies over that). Not likely to happen but probably necessary to get the GOP on board.

What about your current situation does not let you have a job?

OK, the $25/mo premium is a problem, as it will actually cost more for many enrollees in this income bracket than they're currently paying for subsidized ACA exchange plans. HOWEVER, a) it says "up to" so it's possible that they'll knock it down a bit; and b) no one will be locked out of the program for a failure to pay--Kansas apparently has a "debt setoff program"

The Setoff Program is governed by K.S.A. 75-6201 et seq. and began in early 1981 following legislation that allowed the Department of Administration to set off monies the State of Kansas owes vendors and individuals against debts those entities owe to the State of Kansas. In 1993, this benefit also became available to municipalities and in 1996 for the district courts. Participation in the Setoff Program is voluntary. State agencies and district courts can immediately begin submitting debts while municipalities must enter into a written agreement with the Setoff Program (see Municipal Agreement below). Agencies submitting debts to Setoff are referred to as the Creditor Agencies.

The idea appears to be that if you're on Medicaid for a year or two and rack up, say, $600 in unpaid premiums, you can delay payment of that until you're in better financial shape and have the ability to pay it later on. Not ideal but a LOT better than work requirements and lockout periods.

This is completely reasonable. One of the official reasons a lot of states refused to expand Medicaid in earlier years (whether that was the real reason or not) is that they claimed to fear a bait & switch--that the ACA would be revised to change the 90/10 split to 80/20 or whatever, which would double the portion the state has to chip in. Having a failsafe clause isn't out of line.

This is a big cost savings for many states and counties, which otherwise have to foot the healthcare bill for inmates themselves. Now 90% of their costs are being pushed to the feds.

Requires Legislative Post Audit to complete an economic impact analysis of Medicaid Expansion within the first two years of expansion.

Requires the Insurance Department to analyze and provide a report to the legislature on any cost shifting from hospitals to commercial health insurance plans as a result of implementation of the Kansas innovative solutions for affordable healthcare act.

Requires the Insurance Department to make expenditures to (1) study risks and benefits associated with converting the health benefit exchange operated in Kansas under the federal patient protection and affordable care act from a federally facilitated exchange to a state-based exchange, (2) hire a contractor to facilitate such study and report findings of such study to legislature no later than January 11, 2021.

WHOA! I missed this element yesterday...it's just a study of course, and the timing of it means that Kansas would likely move to a partial state exchange for 2022 and a fully state-based exchange in time for the 2023 Open Enrollment Period. That's 3 years off, but still...

This is basically just restating Section 18 in a different way; not sure why it's necessary to mention twice but (shrug) 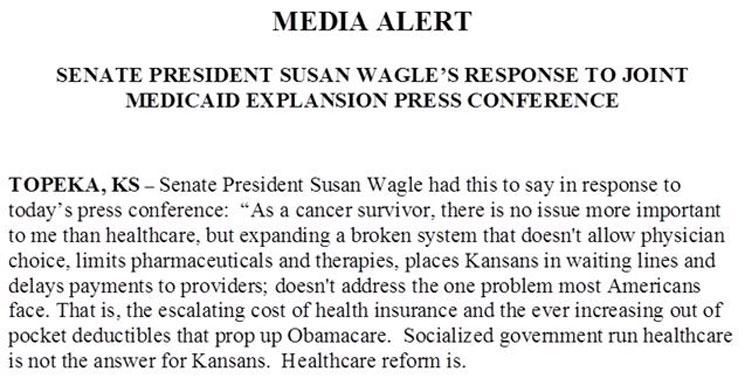