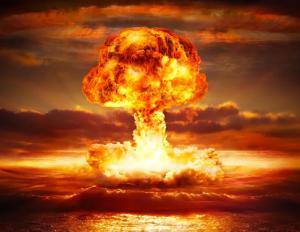 Well, as if Impeachment Day wasn't tense and historic enough already, the 3-judge panel of the 5th Circuit Court of Appeals has finally issued their decision on the Texas vs. U.S. (aka Texas vs. Azar, aka Texas Fold'em) lawsuit intended to strike down the entire Affordable Care Act:

The Patient Protection and Affordable Care Act (the Act or ACA) is a monumental piece of healthcare legislation that regulates a huge swath of the nation’s economy and affects the healthcare decisions of millions of Americans. The law has been a focal point of our country’s political debate since it was passed nearly a decade ago. Some say that the Act is a much-needed solution to the problem of increasing healthcare costs and lack of healthcare availability. Many of the amici in this case, for example, argue that the law has extensively benefitted everyone from children to senior citizens to local governments to small businesses. Others say that the Act is a costly exercise in burdensome governmental regulation that deprives people of economic liberty. Amici of this perspective argue, for example, that the Act “has deprived patients nationwide of a competitive market for affordable high-deductible health insurance,” leaving “patients with no alternative to . . . skyrocketing premiums.” Association of American Physicians & Surgeons Amicus Br. at 15

None of these policy issues are before the court. And for good reason— the courts are not institutionally equipped to address them. These issues are far better left to the other two branches of government. The questions before the court are far narrower: questions of law, not of policy. Those questions are: First, is there a live case or controversy before us even though the federal defendants have conceded many aspects of the dispute; and, relatedly, do the intervenor-defendant states and the U.S. House of Representatives have standing to appeal? Second, do the plaintiffs have standing? Third, if they do, is the individual mandate unconstitutional? Fourth, if it is, how much of the rest of the Act is inseverable from the individual mandate?

We answer those questions as follows: First, there is a live case or controversy because the intervenor-defendant states have standing to appeal and, even if they did not, there remains a live case or controversy between the plaintiffs and the federal defendants. Second, the plaintiffs have Article III standing to bring this challenge to the ACA; the individual mandate injures both the individual plaintiffs, by requiring them to buy insurance that they do not want, and the state plaintiffs, by increasing their costs of complying with the reporting requirements that accompany the individual mandate. Third, the individual mandate is unconstitutional because it can no longer be read as a tax, and there is no other constitutional provision that justifies this exercise of congressional power. Fourth, on the severability question, we remand to the district court to provide additional analysis of the provisions of the ACA as they currently exist.

In short, they ruled that:

I'm no lawyer or Constitutional expert, so I'm gonna "borrow" University of Michigan Law Professor (& ACA expert) Nicholas Bagley's ongoing Twitter liveblog of his initial takeaways. To save time/space I'm just gonna copy/paste his tweets instead of embedding them all, so the formatting will be more bullet-pointy for now:

"Because the undisputed evidence showed that the individual mandate caused these injuries, the district court reasoned that a favorable judgment would redress both injuries, allowing the individual plaintiffs to forgo purchasing health insurance and freeing them "from what they essentially allege to be arbitrary governance."

Now that the shared responsibility payment amount is set at zero, the provision’s saving construction is no longer available. The four central attributes that once saved the statute because it could be read as a tax no longer exist. Most fundamentally, the provision no longer yields the “essential feature of any tax” because it does not produce "at least some revenue for the Government." Id. at 564.

Severability doctrine places courts between a rock and a hard place. On the one hand, courts strive to be faithful agents of Congress,39 which often means refusing to create a hole in a statute in a way that creates legislation Congress never would have agreed to or passed. See Murphy, 138 S. Ct. at 1482 ("[Courts] cannot rewrite a statute and give it an effect altogether different from that sought by the measure viewed as a whole." (quoting R.R. Ret. Bd. v. Alton R.R., 295 U.S. 330, 362 (1935))). On the other hand, courts often try to abide by the medical practitioner’s maxim of "first, do no harm," aiming "to limit the solution to the problem" by "refrain[ing] from invalidating more of the statute than is necessary."

In summary, then, this issue involves a challenging legal doctrine applied to an extensive, complex, and oft-amended statutory scheme. All together, these observations highlight the need for a careful, granular approach to carrying out the inherently difficult task of severability analysis in the specific context of this case. We are not persuaded that the approach to the severability question set out in the district court opinion satisfies that need. The district court opinion does not explain with precision how particular portions of the ACA as it exists post-2017 rise or fall on the constitutionality of the individual mandate.

Although we understand and share the district court’s general disinclination to engage in what it refers to as "legislative guesswork"—and what a Supreme Court Justice has described as "a nebulous inquiry into hypothetical congressional intent," Murphy, 138 S. Ct. at 1486 (Thomas, J., concurring) (quoting Booker, 543 U.S. at 321 n.7 (Thomas, J., dissenting in part))—we nevertheless conclude that the severability analysis in the district court opinion is incomplete in two ways.

It does not explain its statement that the 2017 Congress’ failure to repeal the individual mandate is evidence of an understanding that no part of the ACA could survive without it.

Second, the district court opinion does not do the necessary legwork of parsing through the over 900 pages of the post-2017 ACA, explaining how particular segments are inextricably linked to the individual mandate.

Take, for example, the ACA provisions in Title IV requiring certain chain restaurants to disclose to consumers nutritional information like "the number of calories contained in the standard menu item."

We do the same here, directing the district court to employ a finertoothed comb on remand and conduct a more searching inquiry into which provisions of the ACA Congress intended to be inseverable from the individual mandate. We do not hold forth on just how fine-toothed that comb should be— the district court may use its best judgment to determine how best to break the ACA down into constituent groupings, segments, or provisions to be analyzed.

Remand is appropriate in this case for a second reason: so that the district court may consider the federal defendants’ new arguments as to the proper scope of relief in this case. The relief the plaintiffs sought in the district court was a universal nationwide injunction: an order that totally “enjoin[ed] Defendants from enforcing the Affordable Care Act and its associated regulations.”

The consideration of limited relief may affect the intervenors as well. The district court is better suited to resolving these issues in the first instance.

KING, Circuit Judge, dissenting: Any American can choose not to purchase health insurance without legal consequence. Before January 1, 2018, individuals had to choose between complying with the Affordable Care Act’s coverage requirement or making a payment to the IRS. For better or worse, Congress has now set that payment at $0. Without any enforcement mechanism to speak of, questions about the legality of the individual “mandate” are purely academic, and people can purchase insurance—or not—as they please. No more need be said; it has long been settled that the federal courts deal in cases and controversies, not academic curiosities.

I would vacate the district court’s order because none of the plaintiffs have standing to challenge the coverage requirement. And although I would not reach the merits or remedial issues, if I did, I would conclude that the coverage requirement is constitutional, albeit unenforceable, and entirely severable from the remainder of the Affordable Care Act.

OK, so this sucks, but it's also pretty much what most legal experts/pundits were expecting given the makeup of this particular panel.

SO WHAT HAPPENS NEXT?

For that, I'm gonna make it easy on myself... 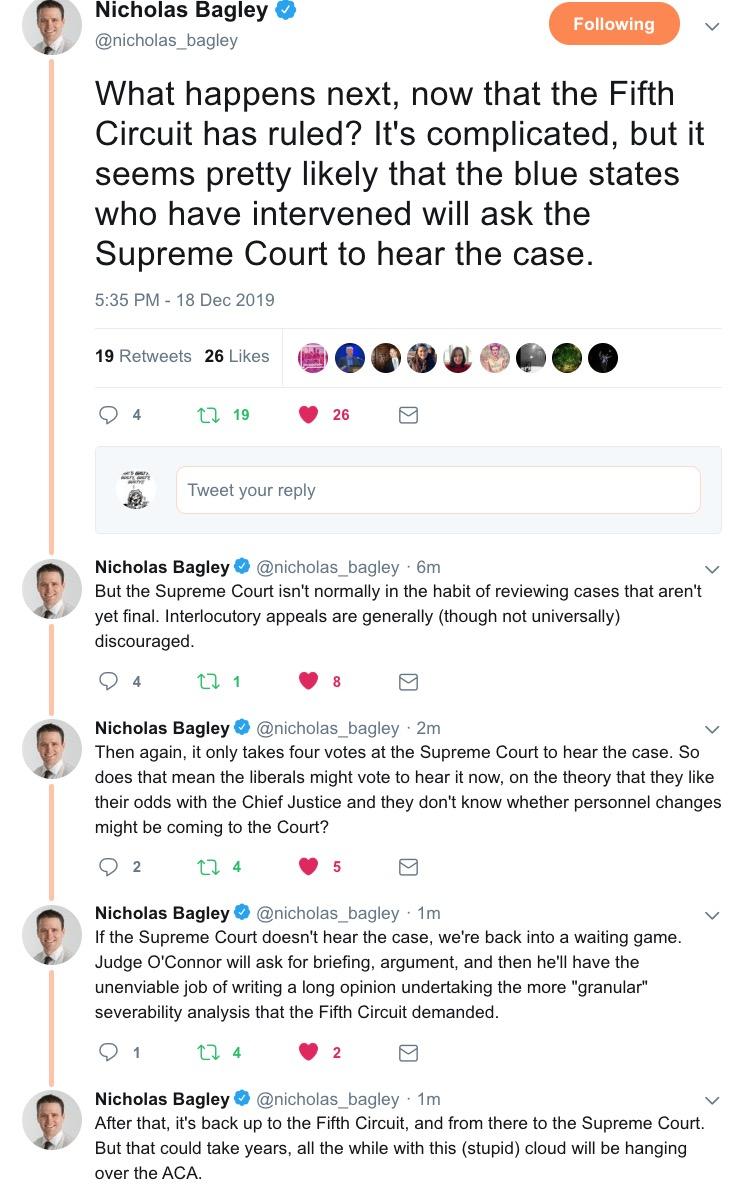 In other words...nothing. Or at least, nothing for awhile, other than giving millions of people the night sweats and even MORE anxiety on top of the stress they’re already under.

The case will likely be tied up for months or even years more either way. If the Supreme Court does agree to take the case now, then I assume it'll be heard sometime next spring and ruled on sometime next summer/fall (right in the middle of the 2020 Presidential election!), which is what I was already expecting to happen anyway.

If the SCOTUS doesn't agree to take it until Judge O'Connor has chimed in again and it's gone back from him up to the Fifth Circuit again, then, as Bagley notes, it could be another year or more before it gets to SCOTUS...who will then take another six months or whatever to issue their final ruling. At that point we're likely into 2021 or later.

In the meantime, I presume the ACA gets another stay of execution for another year...I hope.

Senate HELP Chairman Lamar Alexander, Republican of TN: “I am not aware of a single senator who said they were voting to repeal Obamacare when they voted to eliminate the individual mandate penalty.

“I thought the Justice Department’s argument in the case was far-fetched” https://t.co/GGBzCOLFtD

RE: the #ACA decision.
For now, Pres Trump got the gift he wanted—uncertainty in the healthcare system & a pathway to repeal—so that the care that seniors, workers & families secured under the ACA could be yanked from under them.

CA will move swiftly to challenge this decision.