UPDATE: Well what do you know? Less than a day after Kliff wrote her story on the BYU-Idaho situation, they've already reversed their stance! Bravo for her!

BYU-Idaho, the school @sarahkliff reported would not allow its students to enroll in Medicaid, sent this email to students reversing its decision, per my DMs pic.twitter.com/jEuIu9K1KT

I heard about this story a couple of weeks ago but didn't get around to writing about it until today. Via Twitter:

Students of the BYUs: might want to start making some noise: the Church Board of Ed just decided that they won’t accept Medicaid as a provider for their student health insurance requirement. The week IDaho expanded Medicaid too. Catch 22? DMBA doesn’t count for ACA requirement. 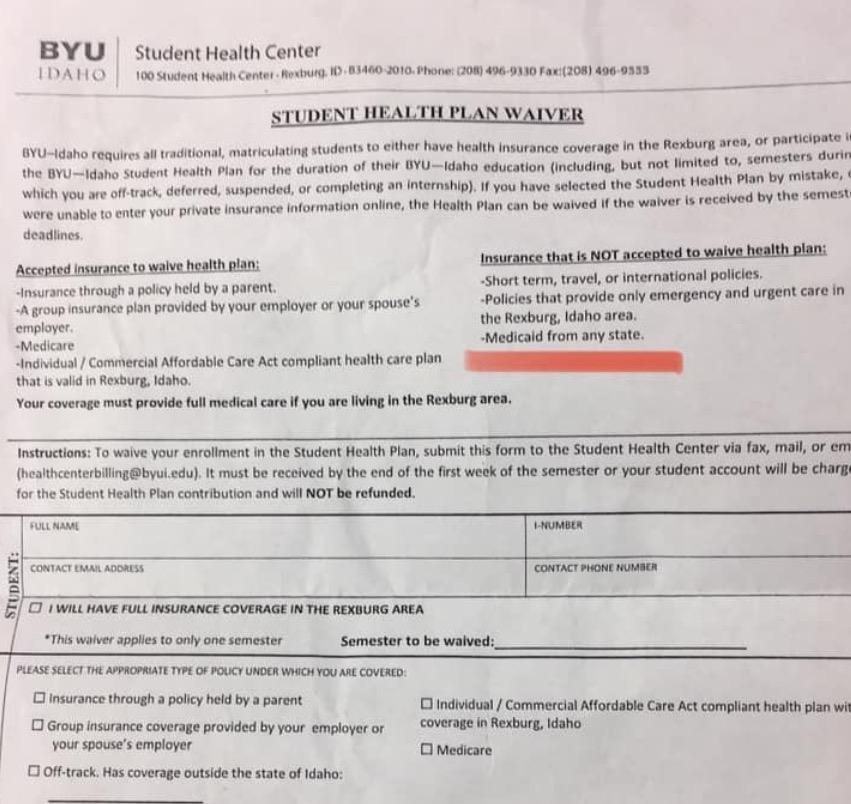 This form was picked up today from the school. Some people called the heath center to ask about it and were told it’s a new policy from salt lake—This is starting next semester in 2020

And I have no idea what the motivation for this decision from SLC could be. I don’t know if politicians have been trying to pull strings like this but I know right now at least half of the babies born in rexburg are on Medicaid so uh this is bad

Not a bad idea to overflow admins emails about this though. Make it an issue they have to address with SLC

Word out of the BYU health center in provo saying this only applies in idaho and Hawaii, while rexburgs Heath Center says all CES schools. So uh, confusion.

Fortunately, Sarah Kliff of the NY Times has done the job for me:

Emily and Kullen Langston were enrolling in classes for the winter semester at Brigham Young University-Idaho when they hit an unexpected roadblock.

The school, like many others, requires all students to have health coverage. But this month, the university made an unusual announcement: It would no longer accept Medicaid.

...To remain in school, they would have to buy private coverage. The cheapest option available is the university’s student health plan, which does not comply with the Affordable Care Act’s consumer protections and would require the Langstons to pay a $3,125 annual premium.

Ms. Langston said her family, which relies on the income her husband earns as a call-center operator, cannot afford that. She had hoped to become a teacher, but now intends to drop out of school, and her husband is unsure whether he will attend.

...The decision on the eastern Idaho campus has confused and angered students. The change is set to go into effect on Jan. 1, the same day Idaho will expand Medicaid coverage to about 70,000 low-income residents, including college students.

The irony here is palpable.

In an email last week to its 19,000 students in Idaho, the university appeared to tie its decision to the Medicaid expansion. It’s not clear how many students currently have Medicaid coverage, but the state projects that about 2,400 more people in Madison County, where the school is, would enroll with the expansion. The university warned that having too many students sign up for the public program “would be impractical for the local medical community,” an assertion a local hospital official rejects.

BYU: "If too many students have affordable healthcare coverage, a lot of them may actually go to doctors 'n stuff!"

The policy change is likely to push more students into a health plan administered by Deseret Mutual Benefits Administration, which, like the university, is owned by the Church of Jesus Christ of Latter-day Saints.

That's a nice racket. Sen. Mitt Romney himself would be proud.

That plan limits annual benefits and doesn’t cover birth control — provisions that would violate the Affordable Care Act, but for a little-noticed Obama-era exemption for universities that fund their own health plans.

I'm not sure, but I think the reason for this is because university student plans are categorized into a sort of in-between area...they're not quite Individual Market plans but they're also not quite Large Group Plans either. It sounds like these shortcomings fall into the "self-insured group plan" category, which are exempt from some ACA requirements.

...The Obama administration required that most university plans comply with the new law by covering a wide array of essential health benefits, including maternity care and prescription drugs, and eliminating annual benefit caps.

The rules, issued in 2013, included a carve-out for a small number of universities that “self-funded” their health plans.

And why isn't BYU voluntarily complying? You guessed it:

...The university publicly opposed the law’s requirement to cover contraceptives. And its plans limited the maximum annual benefit.

It gets worse for the students:

The Idaho campus’s plan has a $4,750 deductible that must be met before it will cover maternity care for the spouse of a student. It does not cover certain major medical services, such as residential mental health care and care related to an organ transplant.

One small bit of good news: It turns out that their Hawaii campus is not imposing the new, ass-backwards policy, anyway:

The Idaho campus is the only Brigham Young site that will no longer accept Medicaid as a substitute for the student health plan, a decision that university officials would not explain. The school’s Utah and Hawaii campuses allow students with Medicaid to waive private coverage.