Clinton: “Here’s what I think. I think that the debate within the Democratic Party is a very healthy debate...to try and figure out how to achieve the goal of covering everybody with quality, affordable healthcare. OK.

“My view on this, having worked on worked on it for many years now, is that the Affordable Care Act took us to 90% coverage, the highest we’ve ever gotten in our country, after many, many efforts, including the one I was involved in more than 25 years ago.

“We have a 10% gap to fill...and we have a lot of learning to do about the best way not only to fill the gap, but then to drive down costs as much as it’s possible to do so without undermining quality advancements. OK.

“So I believe the smarter approach is to build on what we have; a public option is something I’ve been in favor of for a very long time. I don’t believe we should be in the midst of a big disruption while we are trying to get to 100% coverage and deal with costs and face some tough issues about competitiveness, and other kinds of innovation in healthcare. And if you look at our major competitors, a lot of them have mixed systems and produce very good outcomes, like Switzerland, Germany, etc.

“If you look at the 2018 election, you even look at the gains that were made by Democrats last night...the people who are saying “I am determined we’re gonna get to universal coverage, we’re going to get it to a point where people can afford it, where premiums are not gonna be skyrocketing, the deductibles are not gonna be overwhelming, etc...and here’s the best way to do it...that is, I believe, the best position politically, and I also think it makes the most sense in terms of solving the problem.”

Sorkin: “Do you think, though, that the plan that you saw last week, that you could get behind it?”

Clinton: “I think that if it were to go to the Senate...that was the point that I was making before, if you had a President who pushed to present it...I would be very much in favor of whatever the debate was, and...”

Sorkin: “But you don’t think that plan would ever enacted?”

Clinton: “No. I don’t. I don’t...but the goal...the goal is the right goal. I mean the goal is absolutely...and I mean, compare where we are, as the Democratic Party, engaged in a debate about the best way to achieve this goal...with a Republican Party that tried to repeal the Affordable Care Act with nothing ever introduced to replace it, and not only that, but is in court right now to strike the entire law down!

“So, it could be, unless the judges who are hearing this case decide to hold off for a year...it could be that in the midst of this election, you will get a decision, sought by the Republican Party, led by Republican Attorneys General, from a number of states, to completely declare the Affordable Care Act unconstitutional. And if that happens, then it will be the absolute most stark comparison between the Republican Party that never produced a bill in Congress to replace what they were trying to repeal and has stood behind an effort to eliminate it altogether...and there goes healthcare for millions of Americans, and it is striking to me that, yeah, we’re having a debate on our side of the political ledger...but it’s a debate about the right issue: How do we get to healthcare coverage for everybody that we can afford?”

Sorkin: “Will you support whoever the candidate is on the Democratic side?”

“Look...I think we have to measure the risk to the country. And it won’t surprise you to hear me say I think another term of our current administration would be deeply damaging to our economy, to our society, to our standing in the world, whatever metric you want to choose...and therefore we have to retire the incumbent.”

Sorkin: “I want to get back to this idea of firing up the base...versus electability in a broader election.”

Clinton: “Look...that’s what happens in elections. Let’s go back to 2008. So, when I started running in 2008, there were about 10 candidates...9 or 10. It got down to Barack Obama and me. There’s no reason anyone here would remember but one of our biggest points of difference was whether or not healthcare reform, to be successful, would require an individual mandate. We had a knock-down, drag-out fight in debates...he would send out mailers saying that I was for an individual mandate...he said you could get to a system of coverage without it...we were at loggerheads.

So, you know, he wins, he becomes President, introduces a bill...and it has an individual mandate. I mean, that happens in campaigns. So you have to look at the larger question. The details will be litigated out...in the campaign, maybe even in court, but certainly in the Congress, if somebody is successful and elected. And I think it’s important to say, what are the overall goals, and how realistic is it that we can achieve the overall goals if we go down Path A compared to Path B. And I think the Affordable Care Act approach is the more likely approach to be successful.”

Then take another look at this table: 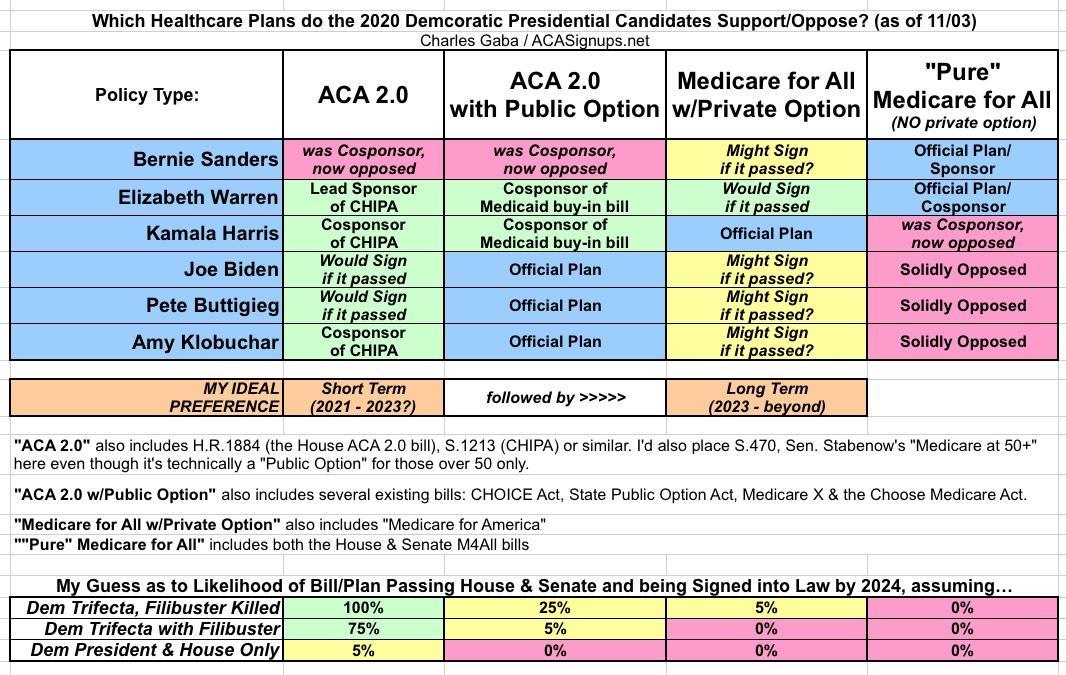 I've said this many times before and will say it many times again in the future: