The typical middle class family would save over $4,400 under this plan. Last year the typical working family paid an average of $5,277 in premiums to private health insurance companies. Under this option, a typical family of four earning $50,000, after taking the standard deduction, would pay a 4 percent income-based premium to fund Medicare for All – just $844 a year – saving that family over $4,400 a year. Because of the standard deduction, families of four making less than $29,000 a year would not pay this premium

(To be clear: This isn't baked into the bill language itself...it's on a list of proposed funding mechanisms. However, I believe Bernie has mentioned "4% payroll tax over $29K" multiple times over the past few months, so until he says otherwise, I have to assume that's what he's going with).

Warren has been far more circumspect on this question, for an obvious reason: She doesn't want to give the Trump campaign the sound bite they're looking for, a sharply-edited clip of her uttering the words "Yes, I would raise taxes on the middle class to pay for Medicare for All".

Instead, every time she gets asked this question, she refuses to accept the framing at all, repeatedly pointing out that what's most important is the overall cost impact of making the move: Any tax increases would be offset by savings on premiums, deductibles, co-pays and so forth.

Having said that, the fact remains that yes, taxes would have to increase on some group or groups of people and/or corporations in order to provide the massive increase in federal spending which such a program would require...and most people, even those who fully understand the trade-off, would still like to know what the trade-off would be. If you say "you'll save money" overall, it's not unreasonable to want to have at least some idea of how much better off you, specifically, would be. At least a ballpark, anyway.

(There's also the other matter about this question which bothers me: The President, whoever he or she is, has no power to "raise taxes" on anyone, at least not in the official sense that we're talking about here--that's up to Congress. If the House, the Senate or both refuses to pass a M4All bill which raises taxes...guess what? Taxes won't be raised. I suppose you could argue that Donald Trump is unilaterally "raising taxes" on people via his idiotic trade war tariffs, but again, those aren't official tax hikes, which is what the question is about).

OK, so to put the "WYRTOTMC" question to bed, there's a few ways Warren can handle it. She can continue to go the "I refuse to accept the framing/total net cost" route...but it sounds like that may be starting to wear thin, judging from this article:

Elizabeth Warren's campaign said on Wednesday that it is studying a range of options for paying for "Medicare for All," leaving open the possibility that the presidential candidate may ultimately diverge from Sen. Bernie Sanders on how his sweeping health care plan -- which Warren has endorsed -- would be paid for.

"She's reviewing the revenue options suggested by the 2016 Bernie campaign along with other revenue options. But she will only support pay-fors that meet the principles she has laid out in multiple debates," a Warren campaign aide said in a statement provided to CNN.

The campaign aide also said that the total cost of Medicare for All is unknown and that estimates vary by trillions of dollars. They did not provide details on what "other revenue options" the campaign is studying, and declined to comment on whether Warren may eventually put out her own details on paying for Medicare for All.

...While Sanders has not detailed how he would raise the revenue needed to pay for Medicare for All, he included a variety of options when he released his 2016 campaign proposal and his updated bill in April. Among those listed in his most recent iteration are a 4% levy on employees, exempting the first $29,000 in income for a family of four. He also suggests imposing new taxes on employers, hiking the marginal tax rate on those making above $10 million, boosting the estate tax and establishing a wealth tax.

After being hammered on either her refusal to answer the question (or her reframing of it, depending on your POV) throughout the debate and afterwards, Warren stated this:

"My commitment is: I will not sign a bill into law that raises costs on middle class families," Warren said.

Aside from the fact that "raises costs" isn't the same thing as "raises taxes", this also brings up the other question: What counts as "middle class"? There's no official definition in terms of income, but the closest I can think of is the Pew Research Center, which defines it as earning between 67% - 200% of the median household income. Obviously household sizes vary, but:

This categorizes households earning between $41,119 and $122,744 in 2017 as middle-class families. That uses the U.S. median income figure of $61,372 from that same year, as reported by the Census Bureau's September 2018 report. The Census Bureau reports mean and median incomes for the previous calendar year every September.

Assuming Bernie's 4% payroll tax was the only tax which directly hit households, the question then becomes whether anyone earning less than $140,000/year would end up seeing their overall costs go up. It's also important to note that you need to know whether they'd go up compared to what they'd otherwise be paying ten years from today. Between inflation and other factors, you can't compare what they'd be paying in 2029 against what people are paying in 2019.

As a friend of mine on Twitter noted in a discussion about this last night, according to the Census Bureau, the median household income is around $63,000/year. Meanwhile, the Kaiser Family Foundation states that as of 2017, around 28% of the U.S. population earned less than 200% FPL. Unfortunately they don't include a breakout over that line.

Of course, it actually gets far more complicated than that. As Jonathan Cohn notes this morning in a must-read piece, the Rand Corp. analysis of the proposed New York Health Act (a state-level single payer bill) found that even if everything were to work out perfectly (hah!), there'd still be some people at every income threshold--even the very lowest end--who would still end up paying more than they currently do:

The Rand analysis of the NYHA makes this quite clear. The report’s appendix breaks down the effect that the plan would have within specific income groups. Within the middle income groups ― those with annual income between 139% and 400% of the poverty line, or about $35,790 to $103,000 for a family of four ― there is always a fraction for whom the NYHA taxes are more than they would have spent for health care under the status quo.

The percentage of people on the hook for higher costs would generally be fairly small. But the "rate shock" that came with the Affordable Care Act, when people suddenly discovered their insurance cost more than it did the previous year, also affected a tiny portion of the population. It created a huge backlash anyway. 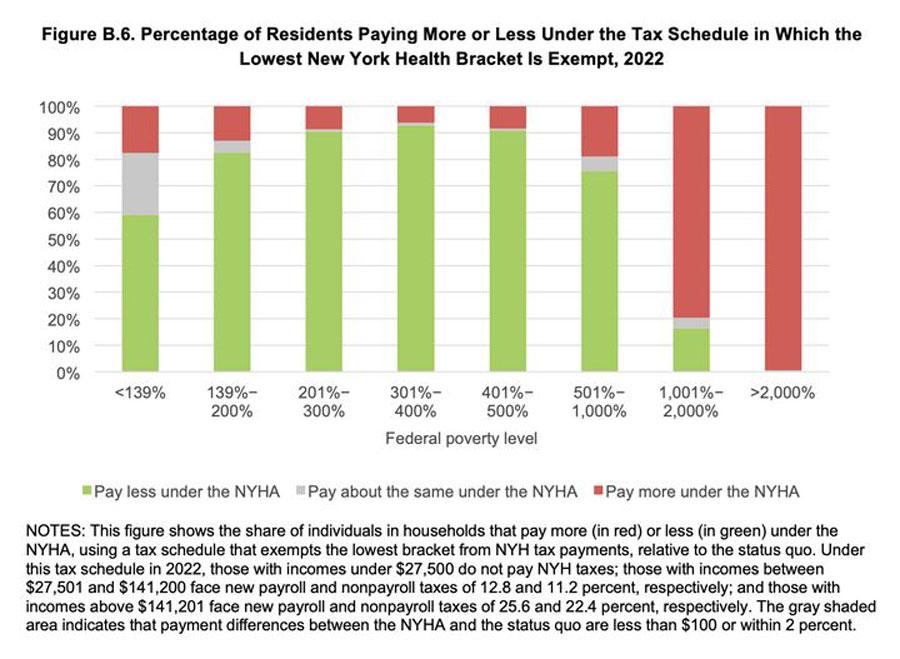 In any event, assuming she's able to come up with the Magic Formula, while I'd still prefer that she break away from Bernie's "pure" M4All bill altogether in favor of something more along the lines of Medicare for America, if Warren does insist on sticking it out, I'd recommend she change her response to something more like this:

"There'd be a trade-off. Most people would NOT see their taxes go up, but for those who do, the trade-off would be the elimination of premiums, deductibles, co-pays, surprise bills and virtually all other medical bills. The majority of people would pay less overall."

By wording it this way, Warren finally answers the burning question (yes, taxes would go up for some people) while doing so in a way which avoids an easy sound bite attack even with clever editing...and by squeezing nearly all of the tax hikes over the 50% median income threshold, she can also honestly say that costs would not go up for "most" people, which avoids trapping herself the way President Obama did when he stated unequivocally that "If You Like It You Can Keep It" without any caveats, which led to a massive backlash when millions of people discovered that no, they couldn't in fact "keep it".