I wrote last month that Highmark BCBS, the sole individual market carrier operating in Delaware, has requested a 5.8% average premium reduction for 2020. In the press release from the state insurance department they noted:

It is important to note, that the proposed rate decrease is unrelated to Delaware’s intended submission of a 1332 Waiver to establish a reinsurance program. If the application process is successful, the actuarial consultant’s projections are correct, and the State of Delaware secures adequate funding, the waiver program may decrease rates by an additional 20%.

NEW CASTLE (Aug. 20, 2019) – The Department of Health and Social Services (DHSS) received approval today from the Centers for Medicare and Medicaid Services (CMS) for a 1332 State Innovation Waiver under the Affordable Care Act to create a reinsurance program beginning in 2020 as a way to reduce premiums by up to 20 percent in Delaware’s individual health insurance market.

Under Delaware’s reinsurance program, a portion of high-cost health care claims that drive up insurance rates for everyone on the individual market will be reimbursed through an estimated $27 million fund. The fund will use a mix of federal funding and assessments collected by the Delaware Department of Insurance from health insurance carriers. The Delaware Health Care Commission will administer the program.

Coupled with reduced rates already sought on the individual market in Delaware, the state expects a significant reduction in premiums for 2020. CMS authorized Delaware’s reinsurance program through 2024.

...“The number one complaint/comment we receive from consumers at the Department of Insurance is the high cost of health insurance, especially from those who are not eligible for tax credits,” Insurance Commissioner Trinidad Navarro said. “With this new waiver program, people who earn above 400 percent of the federal poverty level, small business owners, and those who are not covered by their employers will save up to 20 percent on their health insurance premiums in the individual market. My office will continue to work to seek any and all means to help make health insurance more affordable for Delawareans.”

The exact amount of the reduction isn't clear; the "up to 20%" is based on an Avalere Health analysis which pegs state-run reinsurance programs at around 20% first-year drops as an average. I'll have to see what the final approved rate change for Highmark is to know for sure. In theory it could mean up to a 25.8% reduction including Highmark's existing request, but we'll have to see.

I previously estimated that the state would have to come up with around $10 million with the federal government covering another $30 million, but it sounds like I had my estimates off by quite a bit. Delaware's average premiums in 2019 are a whopping $835/month, or $10,020/year...among the most expensive in the nation. Assuming an average of around 20,000 enrollees per month, that's 20% of $200 million, or $40 million...which suggests that Delaware's reinsurance program is a pretty weak one (most of them have the federal government covering well over half the cost). It's possible that the $27 million is spread out over five years, however?

In addition to reducing premiums on the marketplace, the reinsurance program will benefit anyone who buys coverage on the individual market, including people who are not eligible for coverage at their workplace, those who are too young for Medicare or make too much money to be eligible for Medicaid, young people who have aged off their parents’ plans, or those who are self-employed.

In 2019, about 21,000 people enrolled for coverage on Delaware’s Health Insurance Marketplace. Open enrollment for 2020 will begin Nov. 1 and run through Dec. 15. To learn more about the marketplace, go to ChooseHealthDE.com.

UPDATE: OK, I dug up the actuarial report which was submitted along with the waiver application itself. According to this, 2020 premiums specifically should drop around 13.7% compared to not having the program in place...which, when added to the 5.8% reduction already being requested by Highmark, should bring their actual 2020 premiums in at right around 19.5% lower than 2019 rates. 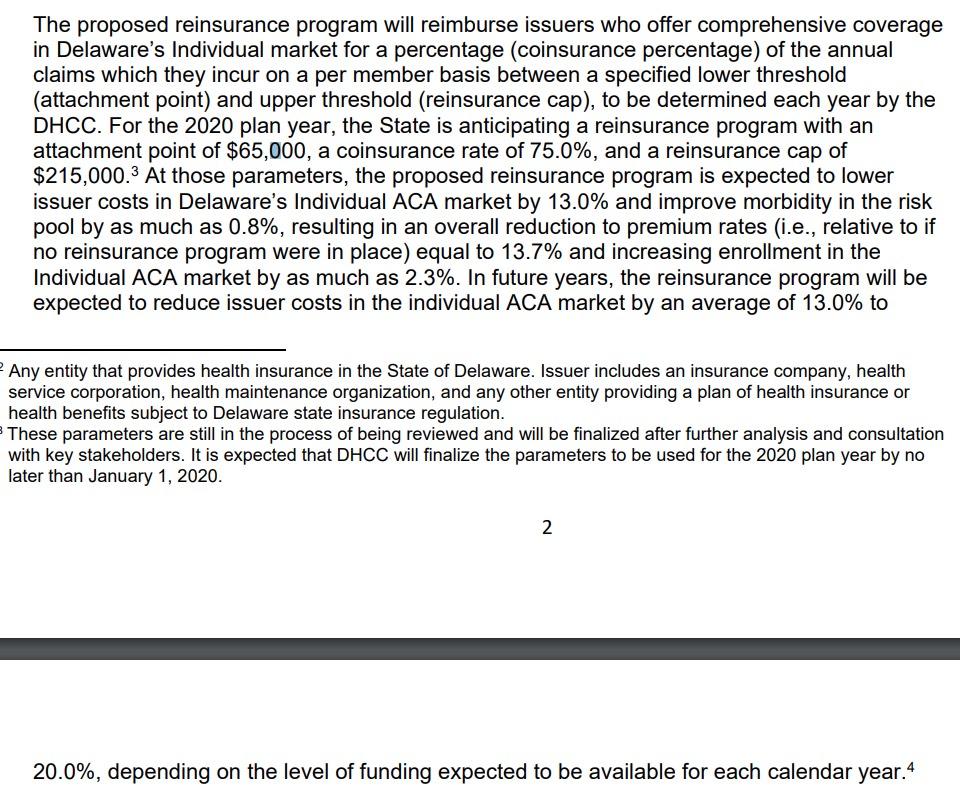