Anderson's point (and mine for some time now) is that even if you assume the Major Overhaul Bill (Medicare for All, Medicare for America or similar) itself actually passes the House, passes the Senate (presumably after the filibuster has been eliminated) and is signed into law by the newly-elected Democratic President sometime in early 2021, you're still likely looking at an actual start date of no earlier than January 1, 2024 under the most optimistic of circumstances...

...and that doesn't even include the 2-5 year ramping-up period (depending on whether it's the House Med4All, Senate Med4All or Med4America bill which gets passed), during which large portions of the population would still be enrolled under the existing ACA framework. All three bills do include some transition period improvements, so it's a matter of perspective as to whether those 2-5 years should "count" or not.

In short, even under a perfect, utopian, Progressive Blue Trifecta Med4All scenario, the ACA framework as it stands now will still be with us (if it isn't stricken down altogether by the Texas lawsuit) for at least the next 5 - 9 years. And it desperately needs to be shored up for that timeframe.

Many of the improvements were already needed even before Trump took office in 2017. Trump/GOP sabotage of the ACA didn't create all of its problems; it simply worsened them. Today, Larry Levitt of the Kaiser Family Foundation addressed this head on:

A good question for Democratic presidential candidates (and President Trump): What's your plan to address the more than 3 million middle-class people not eligible for ACA subsidies who have lost individual insurance coverage since 2016?

There are 3 big holes in the ACA right now:
1. Unaffordable coverage for middle-class people who don't qualify for subsidies.
2. No access to coverage for poor people in states that haven't expanded Medicaid.
3. The "family glitch" for spouses and children of low-income workers.

The debate in the Democratic primary right now is whether to plug the holes in the ACA (some of which were put there or widened by the Trump administration), or abandon that effort for Medicare for all. Some candidates argue for both, playing the short and long games.

Now let's look at what Anderson says about smaller-ball fixes:

A change to the ACA subsidy formula so that no one pays more than 10% of income for a silver plan can’t go live on January 1, 2020 as insurers are just about ready to submit final plans for approval next month.  But the rule making would come out via the routine Notice of Benefit and Payment Parameters in December and the plumbing would not be particularly complex.  These plans would definitely be available for the November 2020 open enrollment period with a go live date of January 1, 2021.

Moving Medicare’s age eligibility date up or down a year or two is also mechanically simple.

Changing Medicaid eligibility and financing so that the enhanced match rate applies to all mandatory populations or only to the new ACA populations but changing that guideline so it is now 167% FPL instead of 138% FPL is also fairly simple.  That is something that could readily go live at some point in 2020.  Creating well funded high cost reinsurance pools would also be a 2020 project.

I've written about both ACA 2.0 bills several times before, but it seems like a good time to revisit them...especially given that several candidates seem to be backing off their "BernieCare-or-Bust" stance:

Sen. Kamala Harris recently ignited another round of controversy on her healthcare position when she distanced herself from the Medicare for All bill that Sen. Bernie Sanderspushed in the Senate — two years after she became its first cosponsor.

In remarks this weekend to wealthy donors at a Hamptons fundraiser, Harris said she has "not been comfortable" with the Sanders proposal, the Daily Beast first reported. Then the California senator told the Washington Post she didn't think her discomfort "was any secret."

Insider reached out to each of the four Sanders bill co-sponsors running for the presidency: Harris, and Sens. Elizabeth Warren, Cory Booker and Kirsten Gillibrand. The Warren, Harris, and Gillibrand campaigns did not respond to requests for comment asking if they stood by the Sanders bill.

Harris has already clarified her split from Sanders, so I'm not sure why they wouldn't comment (nor why they asked in the first place, actually). Gillibrand and Booker seem to be mostly irrelevant at the moment given their anemic polling numbers. That leaves Warren, who's considered one of the top contenders for the nomination...and her campaign's refusal to respond to this question goes back to the crux of my first point above.

All this being said, let's take another look at the ACA 2.0 bills in both the House (which lists Rep. Frank Pallone as the lead sponsor and has 159 consponsors) and the Senate (which was introduced by...wait for it...Elizabeth Warren, and currently has six cosponsors...including, yes, Sen. Gillibrand, Booker, Harris and Klobuchar). Also worth noting: Bernie Sanders also cosponsored the Senate bill last year...yet stripped his name off of it this spring (as did Sen. Maggie Hassan for reasons unknown).

I should also note that the House version (H.R. 1884) has also been broken up into about a dozen smaller, standalone provisions, several of which have already passed the House and are waiting for action in the Senate (not that Mitch McConnell will ever allow that to happen as long as he's Majority Leader).

There's a lot of overlap between the two bills as you would expect...but there are also some differences:

IN ADDITION, the House version would also do the following:

IN ADDITION, the Senate version would also do the following:

The Cost Sharing Reduction bullets need further clarification. The original House version from 2018 also beefed up and expanded the CSR formula...but due to the #SilverLoading workaround which was put together in response to Trump cutting off CSR reimbursement payments, the House Democrats appear to have decided to cut that out of their version of the bill, presumably deciding to let sleeping dogs lie. Silver loading is a confusing and imperfect way of mitigating the damage done by the CSR cut-off, but it sounds like they've calculated that it would be better not to stir up that particular hornet's nest for the moment.

The Senate version, meanwhile, tackles the issues of CSR/deductibles/out of pocket costs head on by formally restoring CSR payments (which eliminates silver loading) but also beefing up the CSR formula and upgrading the benchmark exchange plan from Silver to Gold anyway. This is a far better solution to the issue, though I understand why the House is wary of touching it under the circumstances.

Here's a table simplifying the differences between the two, including a note about the standalone bills which have already been passed or introduced in the House: 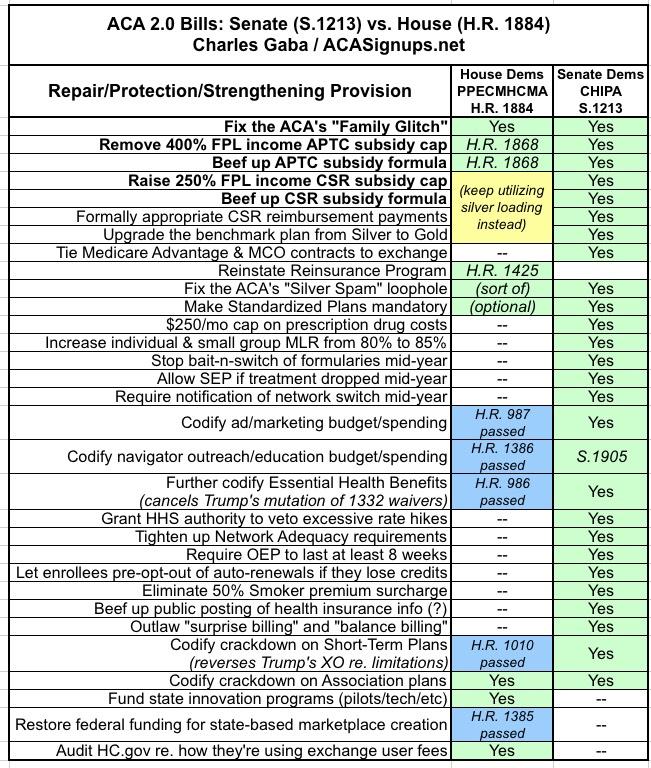