The Maine insurers – Community Health Options, Harvard Pilgrim Health Care and Anthem Blue Cross and Blue Shield of Maine – said new evidence has emerged that the ACA health insurance market has stabilized even further since their original rate filings in early June. The stabilization efforts come at a time when the ACA’s legality is being challenged in federal court.

The irony of this is not lost on me.

Community Health President and CEO Kevin Lewis said there were two primary factors in his organization’s decision to reduce its rate request: a risk adjustment summary from the U.S. Centers for Medicare and Medicaid Services, also known as CMS, issued on June 28, and additional analysis of Community Health’s own policyholder claims in 2019.

“The official notice of risk adjustment results on June 28 provided the certainty needed – and justification – to back off of some of our conservatism that we had built into the initial filing,” Lewis said. “Same, too, with our observations of utilization trends. Early indications were just that – early – and we needed more time to analyze 2019 development. The additional analysis allowed us to back off of some of our conservative outlook on trend.”

Before anyone tries claiming that Donald Trump is somehow responsible for the decrease...

The risk adjustment program administered by CMS was created by the ACA and is designed to reduce incentives for insurers to avoid potentially high-cost policyholders, such as chronically ill patients, by evenly spreading the financial risk among all insurers and helping to stabilize premiums. CMS produces an annual report on the results of the risk adjustment program’s activities during the previous year.

...Another program at the state level in Maine also has helped stabilize rates, the ACA insurers said. The Maine Bureau of Insurance recently revived a $93 million reinsurance program to help reduce premiums for individual insurance in the ACA marketplace. That program has helped to stabilize the market in Maine and reduce annual rate increases, they said.

Again: Reinsurance programs were already part of the ACA via the 1332 Waiver provision...they just couldn't go into effect until 2017, which happens to be when Trump took office. I give him minimal credit for at least signing off of the request, but that's about it.

Anyway,  here's the revised 2020 requests, which now average a 1.6% decrease year over year. The small group carriers remain the same, at a 9.7% average increase. 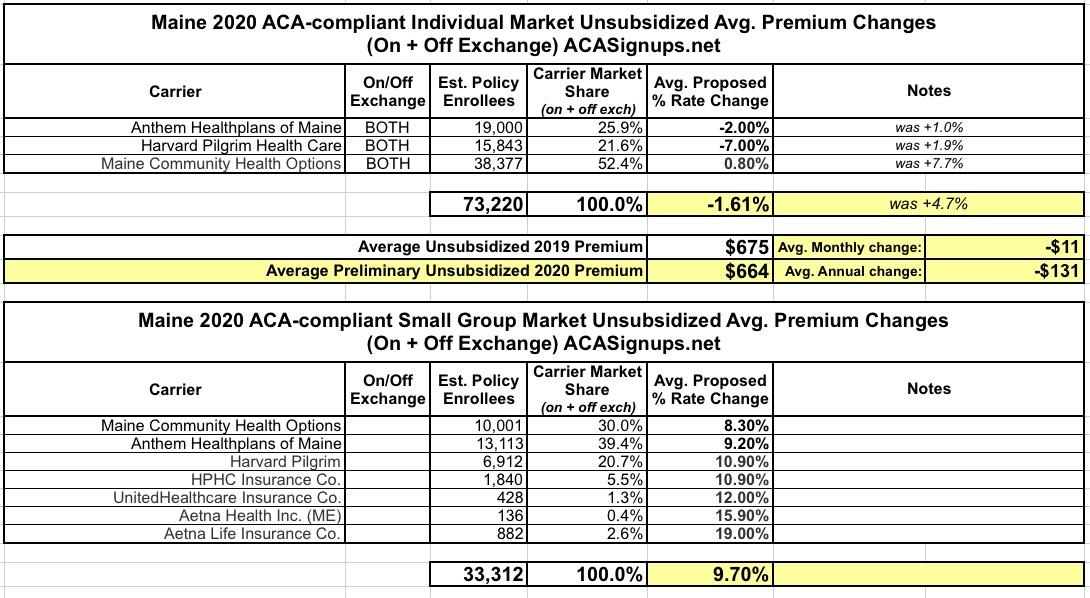