However, I had mostly forgotten about an earlier post I wrote back in January, in which Rhode Island Governor Gina Raimondo had also proposed establishing a state-level reinsurance program via the ACA's 1332 Waiver provision (which a dozen other states have already done)...as well as financing said reinsurance via reinstating the ACA's Individual Mandate Penalty, just like New Jersey did last year:

Rhode Island’s healthcare insurance premiums are among the lowest in the country. Our healthcare exchange experienced the highest year-over-year growth nationally in 2017. Ensuring market stability is key to keeping health coverage affordable for Rhode Islanders. The Governor proposes to fund implementation costs to institute a reinsurance program and reduce market risk for insurers, which results in a more stable market and lower premium increases for Rhode Islanders.

To further mitigate any potential changes to the ACA that could impact Rhode Island’s progress on access and affordability of health care, the Fiscal Year 2020 proposal also includes an individual mandate – modeled after the federal ACA program. This will ensure that Rhode Islanders have health coverage and that access to that coverage does not break the bank.

As I said, I had pretty much forgotten about this until I read this press release from the Rhode Island Insurance Dept:

CRANSTON, R.I. (June 21, 2019) -- The Office of Health Insurance Commissioner (OHIC) today released the individual, small, and large group market premium rates requested by Rhode Island’s four largest insurers. The requests were filed as part of OHIC’s 2019 rate review and approval process (for rates effective in 2020). Tables 1 – 3, below, summarize the insurers’ requests for 2020, and provide the requested and approved rate changes for the previous two years. Two insurers, Blue Cross Blue Shield of Rhode Island (BCBSRI) and Neighborhood Health Plan of Rhode Island (NHPRI) filed plans to be sold on the individual market for persons who do not receive insurance through their employer. In addition to BCBSRI and NHPRI, UnitedHealthcare and Tufts Health Plan filed small group market plans.

Governor Raimondo’s proposed FY 2020 budget called for the creation of the Health Insurance Market Integrity Fund, which would make available reinsurance payments to health plans to reduce the burden of high cost claims on individual market premiums. According to insurer filings, the enactment of the Health Insurance Market Integrity Fund would reduce the individual market premium requests from 6.6% to -0.4% for BCBSRI and from 5.4% to 1.7% for NHPRI. These insurers’ pricing assumptions are subject to review and verification by OHIC. Table 1 shows the requested individual market rate increases with and without reinsurance.

Key factors influencing the rate requests for 2020 are increases in the cost of health care services, including prescription drug cost trends driven by new drug treatments. The rate requests also reflect the reinstatement of the federal health insurance tax, which was suspended in by Congress in 2019. 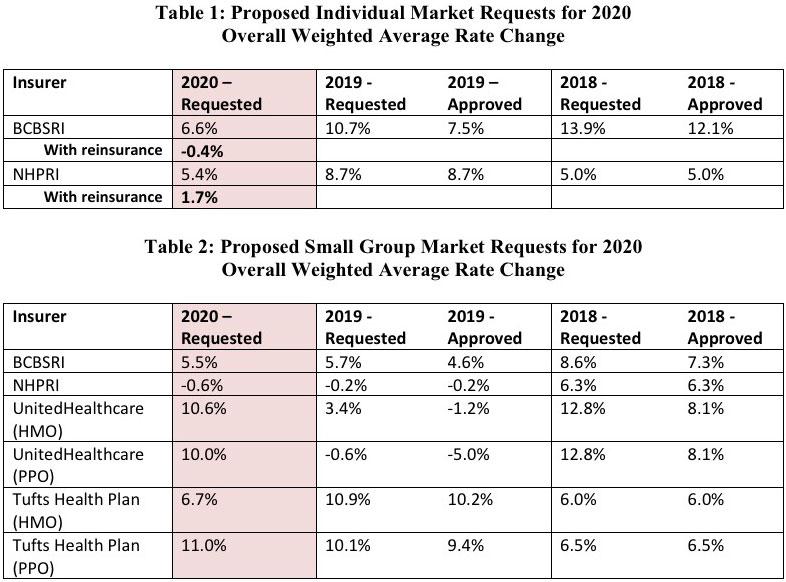 I hadn't heard anything about Rhode Island actually submitting a federal 1332 waiver request, however, so at first I figured this was being funded entirely by the state, which is something that both Alaska and Minnesota did initially before converting to a full 1332 reinsurance waiver.

However, it turns out that the state did indeed submit a waiver request after all:

On July 15, CMS informed Rhode Island that its application for a state-based reinsurance program under Section 1332 of the ACA was complete. Comments on the application can be made through August 14. As with recent waiver applications in Colorado, North Dakota, and Montana, the review process was very quick: the application was submitted on July 8 and deemed complete on July 15 (just one week later). Following the comment process, CMS and the Department of Treasury will approve or deny the application within 180 days.

Rhode Island’s five-year reinsurance program would be overseen by HealthSource Rhode Island (HSRI), the state’s marketplace. The program would begin in the 2020 plan year and is projected to reduce premiums by about 6 percent each year (relative to what premiums would have been in the absence of the waiver). Enrollment in the individual market in 2020 would increase by about 1 percent.

Like nearly all states with reinsurance programs, Rhode Island chose to use an overall attachment point model with parameters set annually by HSRI. For 2020, the program would be expected to reimburse insurers for 50 percent of claims between $40,000 and $97,000. To ensure program predictability, HSRI would reduce or increase the coinsurance rate as needed to make the program budget-neutral (such that reinsurance payments equal the total available funding for the benefit year).

I checked out the legislation in question, and like DC, New Jersey and California, Rhode Island will indeed be sticking with the ACA's $695/adult, $347.50/child or 2.5% of household income for the penalty itself.

As for the actual 2020 premium rate filings, they would average around a 5.9% increase without the reinsurance/mandate combo, but with them they're only expected to go up about 0.8%, just like in California:

I don't know what the weighted average increase is for the small group market, unfortunately, because I couldn't dig up the current enrollment totals for three of the six small group carriers: