Not much of an entry, but still: A month ago, the Oregon Division of Financial Regulation posted the requested 2020 rate changes for the Individual and Small Group health insurance markets: 3.3% on average for the Indy market, 8.7% for the sm. group market.

Today, after reviewing the requests from the insurance carriers, the department has posted their "semi-final" rates. These may still see some additional tweaking before the final, approved rates are locked in, but the odds are that these will be the final rates:

Salem — Oregonians can now see the state’s preliminary rate decisions for 2020 individual and small employer health insurance plans. The Division of Financial Regulation must review and approve any rates before they can be charged to policyholders.

Preliminary rate decisions are for individuals who buy their own coverage rather than getting it through an employer and for small businesses.

Under the preliminary decisions, Silver Standard Plan premiums for a 40-year-old in Portland would range from $436 to $530 a month.

“Although rates are still rising for many consumers, we are encouraged to see the health insurance market stabilizing,” said Andrew Stolfi, insurance commissioner. “Part of the stabilization is due to the Oregon Reinsurance Program providing some relief, enabling carriers to expand coverage into additional counties and keeping rate increases lower than they could have been without it.”

In the small group market, the division has reviewed each company’s rate request and plans to approve the rates as filed. The average rate increases range from a 0.3 percent decrease to a 13.1 percent increase. Under the preliminary decisions, Silver Standard Plan premiums for a 40-year-old in Portland would range from $328 to $394 a month.

Common trends that affect rates include:

All Oregonians are encouraged to participate during the public comment period. Visit www.oregonhealthrates.org to see a chart detailing changes to each plan for 2020, review each insurance company’s public hearing schedule, and submit comments regarding specific health insurance company’s rates.

Final decisions are expected to be announced Tuesday, July 23.

As I noted last month, I get slightly different averages when I plug in the actual enrollment numbers than the state (2.2% instead of 2.3% and 8.3% instead of 8.7%), but that could be due to rounding or other factors. 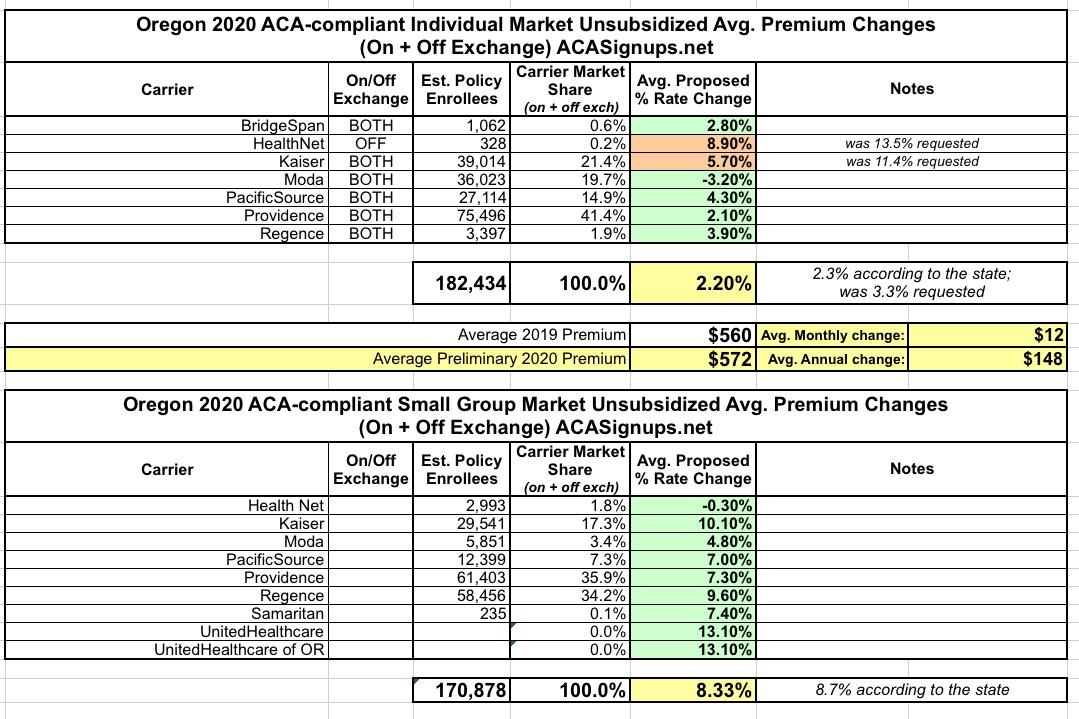