I'm actually a bit surprised that NY State of Health is the first state exchange out of the gate with final enrollment numbers, but good for them:

In the final two days of the 2017 Open Enrollment period, NY State of Health enrolled 45,807 people in coverage bringing the total number of people who receive coverage through the Marketplace to more than 3.6 million- an increase of more than 800,000 people since the end of 2016 Open Enrollment.

January 31, 2017 was the busiest day ever for the NY State of Health Marketplace website. The website provided nearly 3 million page views and was used by more than 110,000 users. This exceeded the prior busiest day of December 15, 2016, in both page views and users. In addition, NY State of Health’s Customer Service Center received more than 100,000 calls on the final day of open enrollment.

As of January 31, more than 1.2 million people enrolled in a non-Medicaid program through the Marketplace: 242,880 people enrolled in a Qualified Health Plan – nearly 60 percent of them qualified for federal tax credits, which most use to reduce monthly premiums throughout the year.

In 2016, New York launched the Essential Plan under the Affordable Care Act’s Basic Health Plan option. Unique to New York, the Essential Plan makes coverage even more affordable for lower-income New Yorkers. As of January 31, enrollment in the Essential Plan reached 665,324, an increase of 75 percent in just one year. In addition, 299,214 children enrolled in Child Health Plus.

A total of 2,427,375 people enrolled in Medicaid as of January 31 through the NY State of Health Marketplace.

Additional information detailing the 2017 Open Enrollment period will be available in the coming weeks.

There's quite a few interesting things to note here:

I should also note, however, a good catch about these numbers from a couple of weeks ago by Bill Hammond of the Empire Center:

...The reason for the discrepancy is that DOH’s release counted only sign-ups through the exchange, which handles less than half of the enrollment for the relevant programs. When off-exchange enrollment is included, the picture changes dramatically, as shown in the chart below. 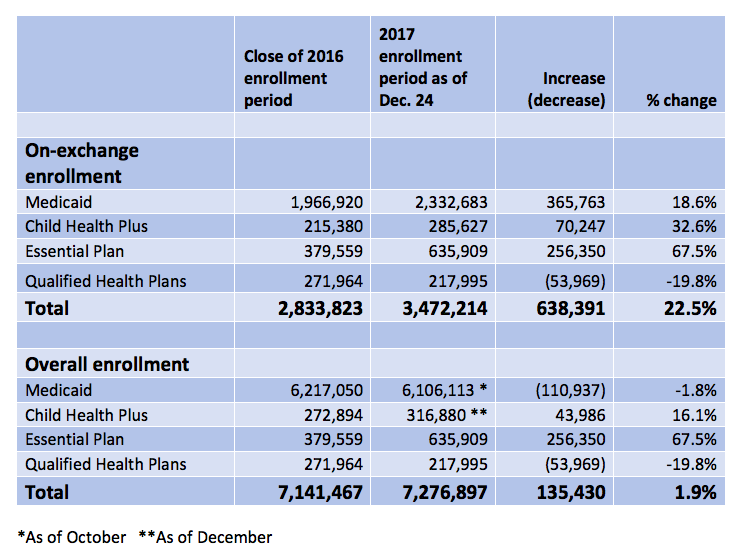 ...On-exchange enrollment for Medicaid, for example, jumped by almost 366,000, or 19 percent, since the last enrollment period. But overall enrollment in the program was down by 111,000, or 2 percent, as of October. This is because a greater share of people are using the exchange to enroll in the program even as fewer people signed up. (Since Medicaid enrollment is continuous, with no “open enrollment” period, this number is unlikely to have changed significantly in the last two months.)

This is basically the same discussion which several ACA Signups regular readers and I have had about the individual market as a whole--If on-exchange enrollment increases by, say, 1 million, that makes for some positive PR, but if it's simply 1 million people shifting from off-exchange to on-exchange plans, it doesn't do much for things like the risk pool or further reducing the uninsured rate.

Now, in the case of QHPs, there are still good reasons to shift enrollment onto the exchanges, as I've argued before, ranging from making it easier to track enrollments to ensuring that everyone who qualifies for tax credits actually receives them, but I do agree that this is a bit misleading on NYSoH's part.

It's worth noting that off-exchange QHPs are not included in the chart above, which also only runs through Christmas Eve. With the final numbers included, the update would look like this: 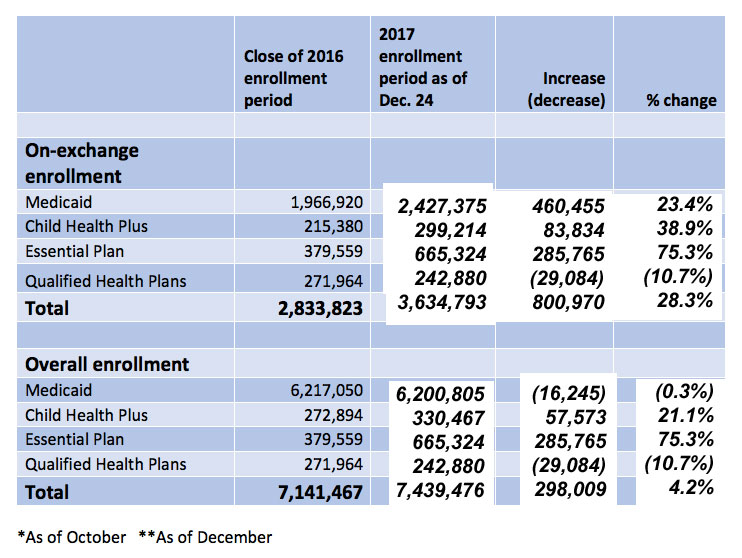 ...for a slightly better overall increase of 4.2%.