FOLLOW-UP: Bernie's MFA bill WOULD allow for SOME private insurance...sort of.

Yesterday I posted an entry which gained some attention in which I noted that yes, Bernie Sanders' specific single payer bill (aka "Medicare for All", S.1804) would in fact eliminate "nearly all" private healthcare insurance...and in fact, that's one of the primary selling points of the legislation in the first place. I wasn't arguing for or against the bill, mind you, I was just asking supporters to stop misleading people about this point.

Note: I'm going to use "Bernie-MFA" going forward instead of just "MFA" because the term "Medicare for All" has been turned into some sort of catch-all rallying cry for universal coverage even though there are major differences between some of the bills and proposals on the table, and on this subject it's important to be clear about which bill I'm talking about.

In response, some Bernie-MFA supporters responded by saying "Hell yeah! That's the whole point! Screw the greedy bastards!"...but some others claimed that I was the one lying (or at least exaggerating) the situation, arguing that there would still be plenty of room for alternate, private healthcare coverage under his bill.

In my piece I said:

As far as I can tell, the only market which would remain for supplemental insurance policies would be elective surgery/procedures and the like. Perhaps I'm missing a few things. The section goes on to note that the HHS Secretary could also make recommendations to Congress about adding even more services to Bernie's MFA law in the future, and it wraps up by stating that states can also offer additional services at their own expense...but again, what types of services would that include?

It was pointed out by several folks that besides elective surgery, there are several other categories which might remain open for supplemental coverage, mainly including new/experimental treatments and "extended" coverage (for instance, Bernie-MFA might have limits on the number of hospital days covered, the number of mental health treatment sessions included, or might only cover "basic" medical supplies instead of the top-of-the-line, deluxe equipment.

So, fine. Here, then, to the best of my understanding, is a comprehensive list of what would be covered by Bernie-MFA and what would be left for individual states or the private market to still offer: 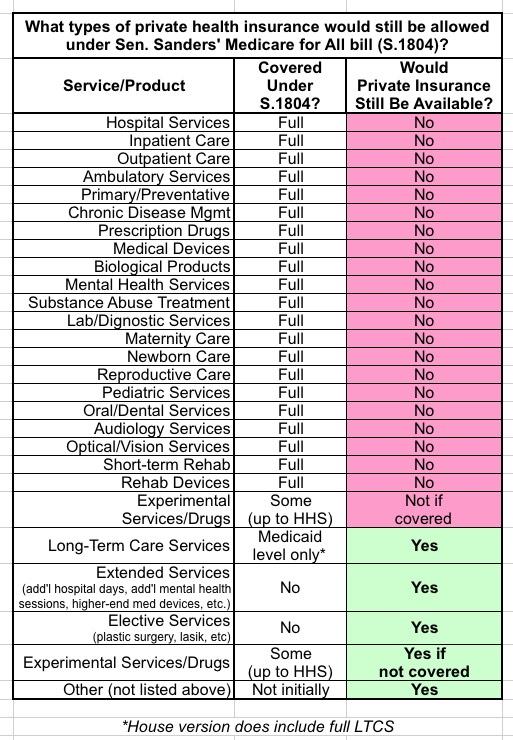 I included "other" since there might be some things I've missed, but I think this includes everything. So yes, there would be a market for what I'm gonna call the "Three E's": Elective services, extended services which go beyond whatever limits Bernie-MFA would impose (if any?), and Experimental treatments or medications. In addition, there might still be a market for Long-Term Services & Support (LTSS), although that depends on whether the final version passed into law used the Senate version (S.1804) or the House version (which does include LTSS coverage, as I understand it).

However, all of this still completely misses the point that I was making yesterday, and which was Jake Tapper's point in his questioning of Senator Kamala Harris a week or so ago. What he asked was this:

TAPPER: ...you support the Medicare for all bill, I think...

TAPPER: ... initially co-sponsored by Senator Bernie Sanders. You're also a co-sponsor onto it. I believe it will totally eliminate private insurance. So for people out there who like their insurance, they don't get to keep it?

Tapper was clearly NOT asking about whether "supplemental" insurance would still be allowed; he was aksing about whether people's current private primary care and major medical insurance would still be around under the version of S.1804 which was introduced by Sen. Sanders and co-sponsored by Sen. Harris and over a dozen other Democratic Senators...and the answer to that is clearly and undeniably "NO".

When the Kaiser Family Foundation issued their latest national survey on the public's support for Bernie-MFA vs. some type of public option, here's how they worded it: 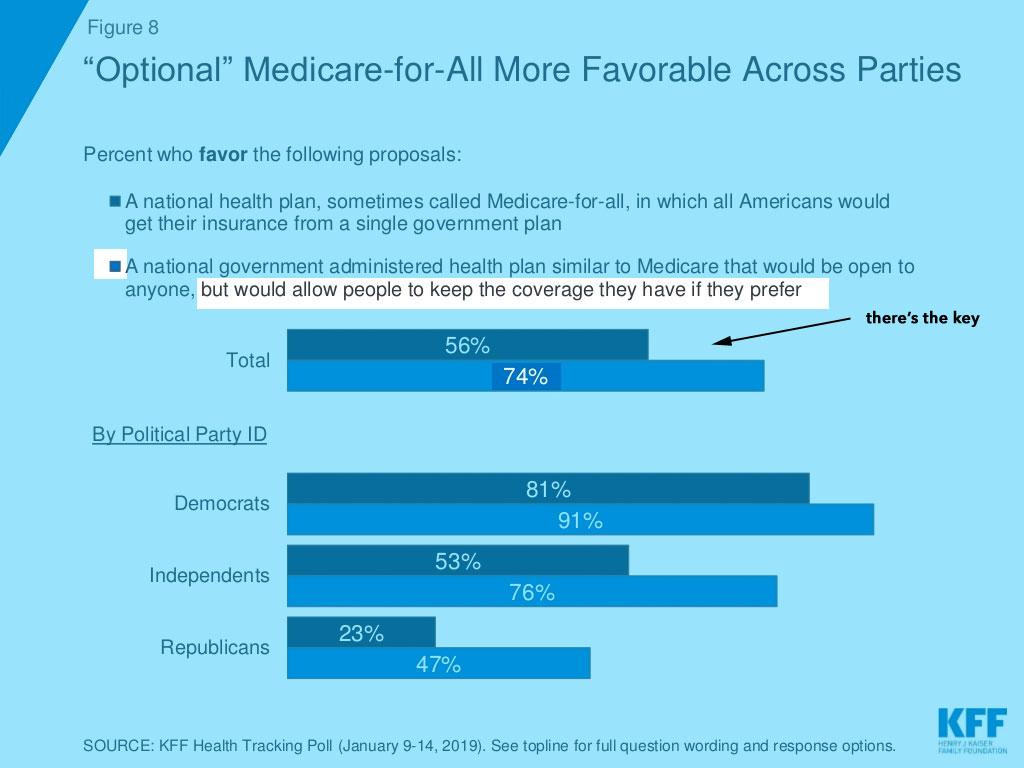 "Allow people to keep the coverage they have if they prefer" CLEARLY IS TALKING ABOUT MAJOR MEDICAL POLICIES, NOT SUPPLEMENTAL (although some might have concerns about their supplemental coverage, like MediGap, as well). And there's a whopping 18-point gap between those who say they support Bernie-MFA (which would be mandatory) and those who support making it optional for people to enroll or stick with private coverage (nearly all of which would be employer-based coverage, since around 11x as many people have employer coverage than individual market coverage in the first place).

More important, politically, is the partisan breakout: The vast majority of Democrats would be fine with either approach...but there's a 23-point gap between the two among independents...while among Republicans, only 1/4 of them are open to Bernie-MFA (still not bad!), while nearly 50% of them would support making it optional, which is a staggeringly impressive and important data point.

Again, I'm not saying that full-blown Bernie-MFA isn't worth the fight (at least, I'm not saying that here; I'm obviously on record as preferring a "Medicare for America"-style hybrid approach); I'm just asking supporters of it not to try and have it both ways on whether or not it would replace all primary/major medical healthcare coverage, because it would. I can't fathom why any of them would try to nitpick about this point seeing how, as I noted above, eliminating private health insurance in favor of a fully tax-funded public system is one of the main points of the bill.

Addendum: The following CNN poll was just released within the past hour or so which makes pretty much the same point. It's important to note that this question was only asked of people who DO support a national healthcare coverage program:

The total that CNN finds support a national healthcare program is 54% (pretty much in line with Kaiser's 56%), but among that 54%, over half would prefer it to be done Public Option-style rather than being completely mandatory for everyone.