Last April, Maryland was one of several states which took action to counteract portions of the Trump Administration's attempts to sabotage the Affordable Care Act. In particular, Maryland (which has a Democratically-controlled state legislature but a moderate (by today's standards) Republican Governor) passed and signed into two important bills:

The combined effect of these changes was dramatic: Maryland's individual market insurance carriers, which had been planning on jacking up their average premiums by a whopping 30%, instead ended up lowering their 2019 premiums by over 13%. This is a net swing of around $3,200 per enrollee for the year (around $266 per month). In other words, instead of seeing unsubsidized 2019 premiums go up by $2,200 apiece, they dropped around $1,000.

Of course, that drop would have been even more dramatic if Maryland had also followed New Jersey's lead and reinstated the ACA's individual mandate as well--unsubsidized premiums would likely have dropped another 5%, or nearly $500 more apiece...but even so, it's a pretty impressive difference.

OK, so unsubsidized premiums saw a huge drop. Good news, but what did that mean in terms of actual enrollment numbers for 2019?

Last March, the Wakely Consulting Group projected that without implementing the reinsurance program, Maryland would see roughly a 4.7% reduction in their overall ACA-compliant individual health insurance market enrollment, from around 180,000 people in 2018 (both on- and off-exchange combined) down to around 171,500. With the reinsurance program, Wakely projected a nominal increase in ACA-compliant enrollment, by around 1,600 people or so...roughly a 10,000 enrollee swing. Not hugely impressive, but not bad, and the main point is to lower unsubsidized premiums anyway, which it was hugely successful in doing; any net enrollment increase is more of a cherry on top.

Holy smokes. That's either a net swing of over 40,000 enrollees (4x as many as Wakely expected) or, put another way, a net increase of 32,000 over 2018 (20x as much of a net incresae as expected). The 4x swing seems like a more reasonable way to state the difference to me, though.

Furthermore, it's important to note that only around 3,400 of the increase came from the on-exchange market. The other 28,600 people, or 90% of the increase, are unsubsidized off-exchange enrollees.

Put another way, Maryland's on-exchange ACA individual market increased by 2.2% year over year...but the off-exchange market more than doubled, from around 26,500 to over 55,000 Marylanders.

There's a bunch of other handy data wonk stuff in the 2019 Open Enrollment Period MD Health Benefit Exchange report, including the following (which only applies to on-exchange enrollment):

Note: That's 12% of total exchange enrollments which Navigators assisted with.

Interestingly, according to the report, the number of customer assistance calls dropped by 24% year over year even as enrollments increased 2.2%. and the average time needed to handle the calls dropped by 13%, which suggests that the MD exchange has done a great job of streamlining the process and helping enrollees understand the process, such as:

That last one is new to me--I thought that Massachusetts and Rhode Island were the only state exchanges which were handling premium payments directly. It looks like Maryland is starting to as well, although it's obviously optional for now.

Oh yeah, and Maryland has very much jumped onboad the #SilverSwitcharoo express: 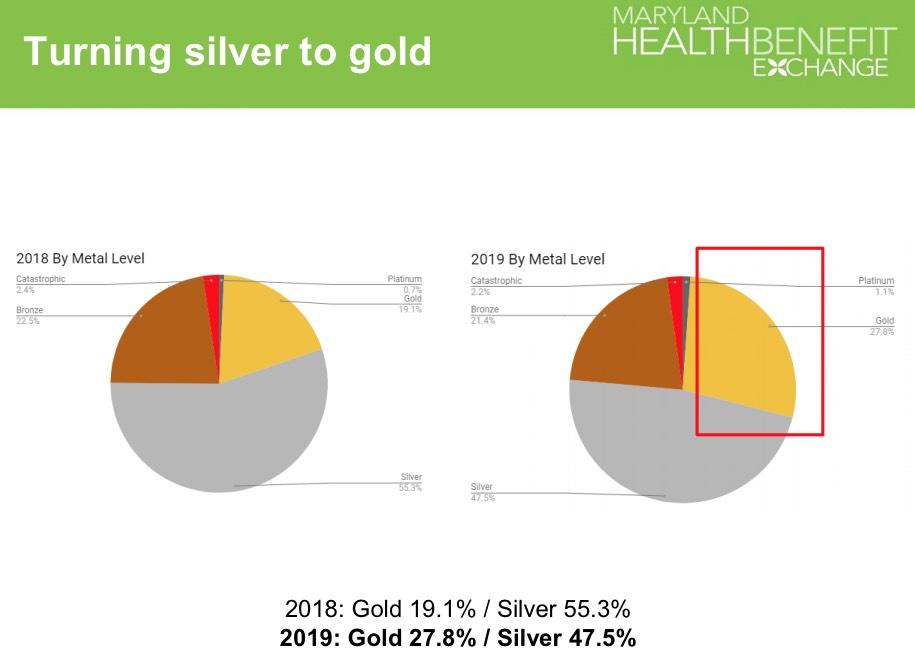