It's Not Over Yet: #ACA Open Enrollment hasn't ended for 25% of the population! 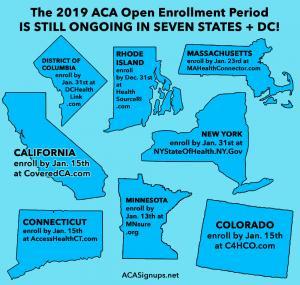 So, it's over, right? Well...not quite. The 2019 ACA Open Enrollment Period officially ended last night...but only in 43 states. In the remaining seven (+DC), Open Enrollment hasn't ended yet, and won't for anywhere from two to six more weeks from now!

2019 ACA Open Enrollment is still ongoing for fully 25% of the population!

Including the District of Columbia, these seven states include over 81 million people...that's 25% of the entire U.S. population!

UPDATE: About 60% of Alaska residents also have until January 29th to get covered if they were impacted by the recent earthquake there.

UPDATE: Apparently Washington State residents who had problems enrolling by the original deadline also have until December 20th (tomorrow) to sign up:

If you have not yet signed up for health insurance through the Washington Health Benefit Exchange and want to, there is still time.

A limited time special enrollment period has been added for people who had trouble selecting a plan before Saturday's original deadline.

Those interested in signing up for healthcare during the extended enrollment should call customer support at 855-923-4633 by 8 p.m. on Thursday, Dec. 20 and request special enrollment with benefits beginning Jan. 1, 2019. Representatives at customer support can speak 175 languages and are available from 7:30 a.m. to 8 p.m. on weekdays.

UPDATE: While I'm at it, the Vermont exchange has also announced a similar policy:

Do you need 2019 health coverage but weren’t able to reach us by the deadline? Sign in to update your account or call us this week, December 17th through December 21st, from 8 am to 5 pm. As long as you get in touch, we will keep working to get you into your preferred plan for January 1st. Also, if you haven’t already done so, check out the 2019 Plan Comparison Tool.

UPDATE 1/03/19: Scratch both Washington State and Vermont off the list.

Oh yeah...and if you do live in five of these states, you may even qualify for a FREE (as in, $0 premium) Bronze ACA policy: