This makes the sixth state-based exchange in a row to post their 12/15 enrollment totals this afternoon...and it's the FIRST report of any sort to come out of Maryland. Fortunately, the news is quite good:

Oooh...now that's a treat for a data wonk like me...official off-exchange data is difficult to come by in most states...

BALTIMORE (DEC. 17, 2018) – A total of 156,963 Marylanders enrolled in private health coverage for 2019 during the open enrollment that concluded Saturday on Maryland Health Connection, the state-based health insurance marketplace.

That was 2 percent greater than a year ago when 153,571 enrolled. The 45-day open enrollment period for the 2019 plan year began Nov. 1 and ended Saturday. A few hundred additional enrollments will be completed in the next day or two by people who had begun the process but hadn’t completed their enrollments by 11:59 p.m. Saturday.

Total enrollments in the individual market both on and off-exchange exceeded the estimated impact of the “reinsurance” program put in place this year to make coverage more affordable. Gov. Larry Hogan and the Maryland General Assembly initiated the program last spring and then gained approval from the federal government to lower rates for 2019 by 30 percent from what the insurance providers originally proposed.

“The outpouring of activity on Saturday was amazing. We are very happy that so many Marylanders were able to get coverage for themselves and their families for 2019,” said Michele Eberle, executive director of the Maryland Health Benefit Exchange, which administers Maryland Health Connection. “More individuals and families with coverage means added security and peace of mind for them and lower insurance costs for everyone.”

Last spring, Wakely Consulting Group had estimated the total individual health insurance market in Maryland, both on and off exchange, for 2019 would dip to 171,526 enrollees without a reinsurance program. With a reinsurance program, which cushions the insurance carriers against high claims, Wakely estimated 181,582 enrollees. The total market for individual insurance in Maryland for next year, both on and off exchange, is now at 212,149.

As an aside, why can't every state provide that kind of off-exchange data every year?

That far exceeds Wakely’s estimate that reinsurance would increase enrollment in the individual market by 6 percent; the actual increase is more than 20 percent.

A last-minute surge of activity resulted in 5,432 enrollments Saturday on Maryland Health Connection -- the largest day ever on the state’s health exchange and roughly 2,000 more than the previous peak enrollment day a year ago. Visits to the “Enroll MHC” mobile app Friday and Saturday also were at an all-time high, with 38,558 users, more than doubling the traffic on the final two days last year.

With open enrollment ending, Marylanders who qualify for Medicaid coverage can still sign up year-round. And others may qualify for a “special enrollment” if they can show they’ve lost coverage through a job change, divorce or other qualifying life event. More information is available at MarylandHealthConnection.gov or at 855-642-8572.

Among other highlights from the recent open enrollment on Maryland Health Connection for 2019:

In addition, the Maryland exchange also crammed in a ton of other interesting (to wonks) demographic data: 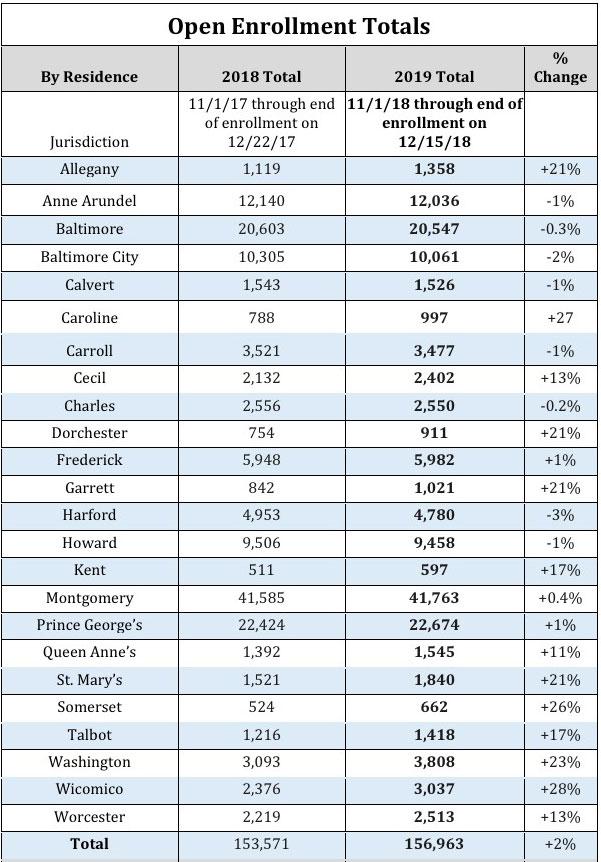 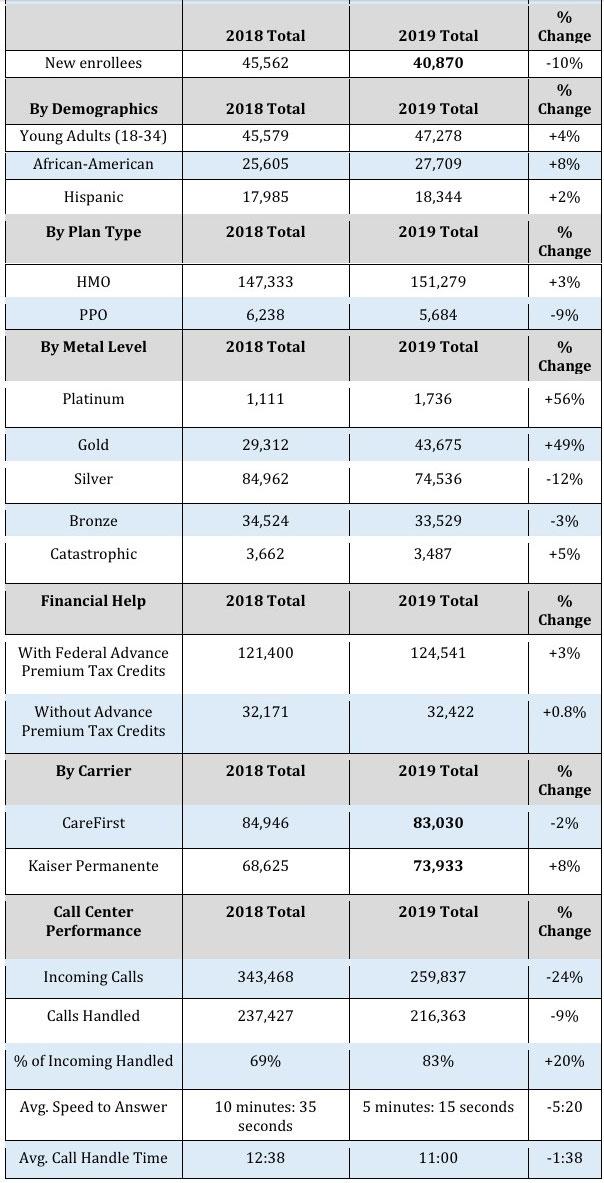