Kaiser Poll explains WHY repeal of the Mandate Penalty isn't AS bad* as many expected...yet.

Earlier this year, most healthcare wonks (along with the Congressional Budget Office) projected that Congressional Republicans repealing the ACA's individual mandate last December (effective January 1, 2019) would have a significant Adverse Selection impact on the ACA-compliant individual market risk pool. Projections of the premium increases imposed in response to the drop-off of healthy enrollees ranged from 10% (CBO) to as high as 16.6% (Urban Institute, although that also included a small increase due to Trump's expansion of short-term plans as well).

However, when the dust settled on actual average 2019 premium increases nationally, insurance carriers nationwide seemed to decide that the actual impact won't be as bad: Roughly a 7% impact from the mandate being repealed, plus another 1-2% hit from short-term and association health plans being expanded, for around 8.1% combined.

The Kaiser Family Foundation came to a similar conclusion, though they brought it in even lower: Around a 6% mandate repeal impact overall.

There's several potential reasons for this discrepancy between projections and reality. One is that the carriers themselves might simply prove to be wrong--remember, that 6-7% premium increase is based on their assumptions about how the mandate being repealed will impact their risk pool, not what the impact actually will be. THAT won't be known until after the end of 2019, more than a year from now. If they called it right, they'll do fine; if they underestimated the impact, they'll raise rates more in 2020.

Here's another possible reason: The carriers might have decided that most people still don't realize that the mandate has been repealed. 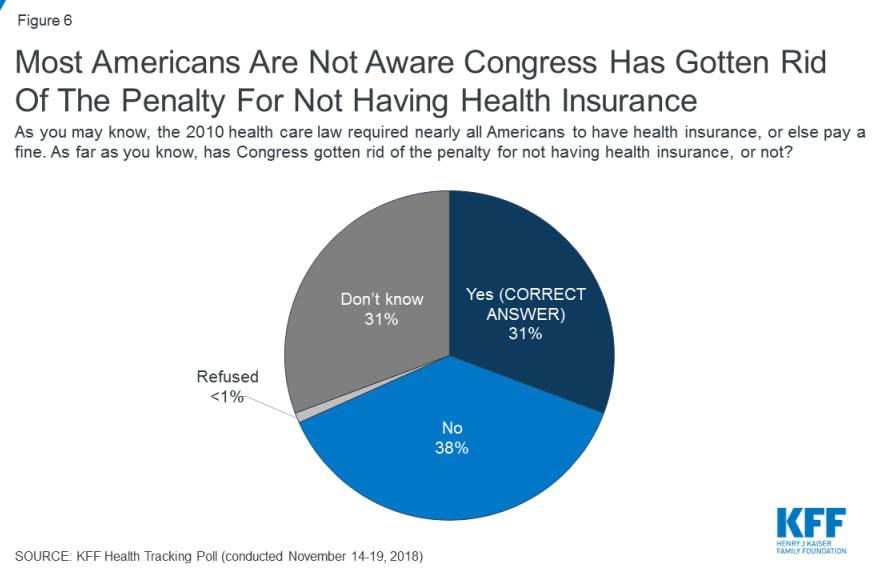 It's vitally important to understand what the purpose of the ACA's individual mandate penalty was in the first place. The point wasn't to punish people, it was to encourage them to get covered (the secondary purpose was to raise a few bucks to help cover things like financial subsidies for those who do get covered, of course). You can argue about how effective the penalty has been in accomplishing the first goal, but that was the point.

The problem with the way the individual mandate is structured has been twofold: First, it simply wasn't high enough. I realize that sounds draconian, but it's true...if your goal is to impose a financial penalty on someone who genuinely thinks they'll be better off without health insurance, a $700 penalty isn't likely to change their minds if the lowest-priced policy will cost them, say, $2,800. I'm not saying the penalty should have been that much, but there's definitely a psychological threshold where someone decides that one option is better than the other, and a 4:1 ratio simply isn't it.

The second problem with the penalty is the timing disconnect with the enrollment period. Last year, Open Enrollment was in November/December of 2017...for coverage in 2018...but no one will file their taxes for 2018 until the spring of 2019. That means anyone who skipped out on enrolling last fall won't be penalized for that decision until nearly a year and a half later. Not only is there a psychological disconnect involved, there's also a lot of life changes which can happen in a year and a half. Maybe you'll get a raise! Maybe you'll get married! Maybe you'll win the lottery!

Having said that, let's get back to the Kaiser survey above: 31% of the country knows that the mandate has, in fact, been repealed, effective January 1st, 2019. However, a full 69% either think it hasn't been repealed or don't know whether it has or not.

Before considering the impact of this, it's important to note that I have no idea whether that 69% statistic (for all adults nationwide) is equally representative of people eligible for individual market coverage, whether subsidized or not. This is important because that's who the impact on the individual market risk pool applies to. The indy-eligible market is such a small portion of the population anyway that it's conceivable that 100% of those eligible do know the mandate has been repealed while, say, 80% of the rest of the country doesn't.

Assuming that 69% (or close to it) is representative, it actually means that most of those who have been influenced by the mandate penalty in the past will still be influenced by it.

To reiterate: The goal of the mandate is to encourage people to get ACA-compliant healthcare coverage. If someone gets covered because they think there's a penalty for not doing so...guess what? The penalty has, in that instance, done its job even if it's never actually imposed.

You can obviously debate the ethics/morality of whether people being misinformed about the status of the law is an inherently evil thing or not, but the fact remains that psychologically, the power of the mandate lies in people thinking it'll be imposed.

Regardless of the ethical dilemma this may pose, my suspicion is that this is a big part of the reason most ACA insurance carriers "only" tacked on around 6 points to their 2019 premiums instead of the 10-15 or so some were anticipating.