Hot off the heels of the Week 4 HC.gov Snapshot Report, CMS has also released another important ACA exchange enrollment report:

Effectuated Enrollment for the First Half of 2018

This report provides average effectuated enrollment and premium data for the Federal and State-Based Exchanges for the first six months of the 2018 plan year. The Centers for Medicare & Medicaid Services (CMS) publishes effectuated enrollment data semiannually to provide a more accurate picture of enrollment trends for the Exchanges than indicated by the number of individuals who simply selected a plan during Open Enrollment. For coverage to be considered effectuated, individuals generally must pay their premium for the given month.

Effectuation reports answer the question "BUT HOW MANY HAVE PAID??" which Republicans screamed about so often it became a running joke during the first Open Enrollment Period back in 2013-2014. Remember, just because someone selects a healthcare policy via an ACA exchange doesn't necessarily mean they pay their premium, although the vast majority (around 90% or so) do pay for at least the first month.

After that, however, there's a lot of churn in the market as people move on and off of their policies throughout the year. Something like 8,000 or so people enroll each and every day during the off-season thanks to Special Enrollment Periods (SEPs), via life changes like losing their employer coverage, getting married, getting divorced, giving birth, getting out of jail and so on. At the same time, thousands of other people are dropping their exchange-based coverage due to similar reasons.

Overall, more people tend to drop out throughout the year than those who jump in, which means there's always a net attrition which happens between the end of the Open Enrollment Period (OEP) and that December. This data isn't tracked nearly as closely or consistently as the OEP data (I wish it was), but CMS does put out occasional reports which give a fairly decent picture of the situation.

As of September 15, 2018, an average of 10.3 million individuals had effectuated their coverage through June 2018, meaning that they selected a plan and paid their premium, if applicable. The average effectuated enrollment for the first six months of 2018 was approximately 137,000, or 1 percent, higher compared to the same time period in 2017.[1]

This is a good thing and an impressive improvement...and I'm pretty sure I know what caused that improvement. There are two main reasons for this. The first one was the earlier starting dates for exchange enrollment.

There were several arguments against shortening the Open Enrollment Period from 3 months to 6 weeks starting last year, but one of the upsides of doing so is that more of those who did enroll did so earlier--instead of around 80% having their policy kick into effect in January and the rest start in February or March, well over 90% started in January this year (nine of the state-based exchanges stuck with longer enrollment periods, and three of them (California, New York and DC) stuck with the original end date of January 31st). That means that the average effectuation number per month was guaranteed to be somewhat higher no matter what.

The other reason, which isn't quite as obvious from the raw data, is hinted at in the next paragraph of the report:

Yes, that's right: Donald Trump's botched attempt at "blowing up" the ACA exchanges by cutting off CSR reimbursement payments pretty much completely backfired on him, at least for those earning less than 400% of the Federal Poverty Level. Thanks to the clever #SilverLoading / #SilverSwitcharoo workaround which carriers, state regulators and state ACA exchanges came up with to counter the CSR sabotage, millions of ACA exchange enrollees are receiving a windfall in terms of financial subsidies this year, which has allowed them to enroll in either dirt-cheap Gold plans (often costing less than Silver) or zero-premium Bronze plans.

Put simply, it's pretty easy to keep paying your monthly premium when you're enrolled in a healthcare policy where the premium is nothing at all. Others are enrolled in plans costing a nominal amount ($10 - $20/month).

The dark side of Trump's CSR sabotage backfiring on him, of course, is that unsubsidized enrollees, especially in states which didn't go the full #SilverSwitcharoo route, are paying through the nose this year.

In any event, here's the state-by-state breakout, along with a 5-year graph (well, 4 1/2 anyway) comparing the relative effectuation attrition patterns for ACA exchange enrollees every year since 2014: 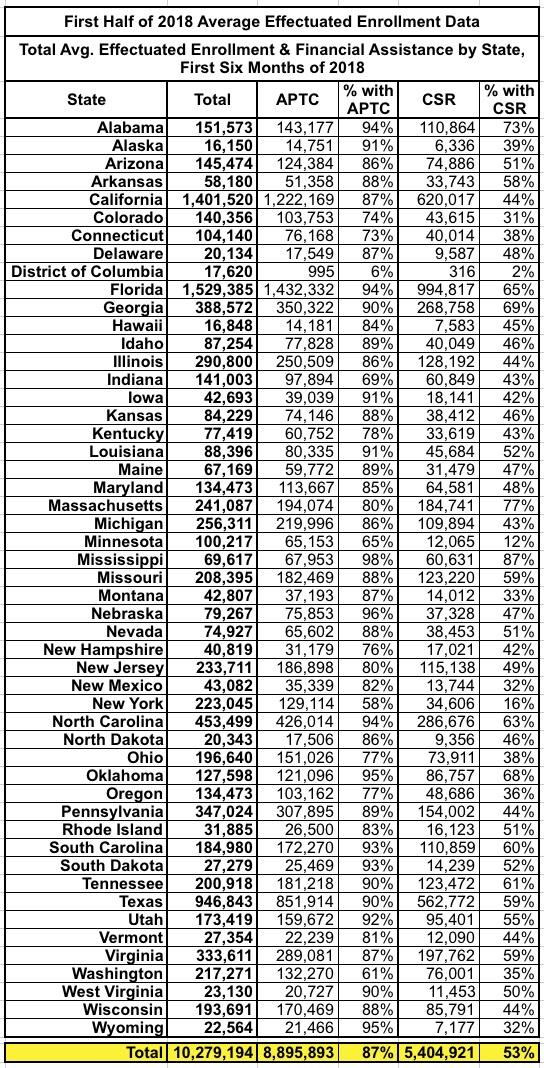 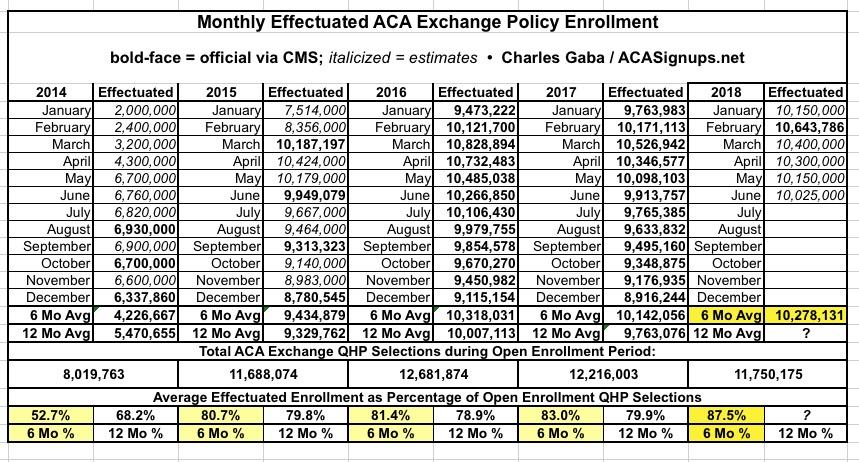 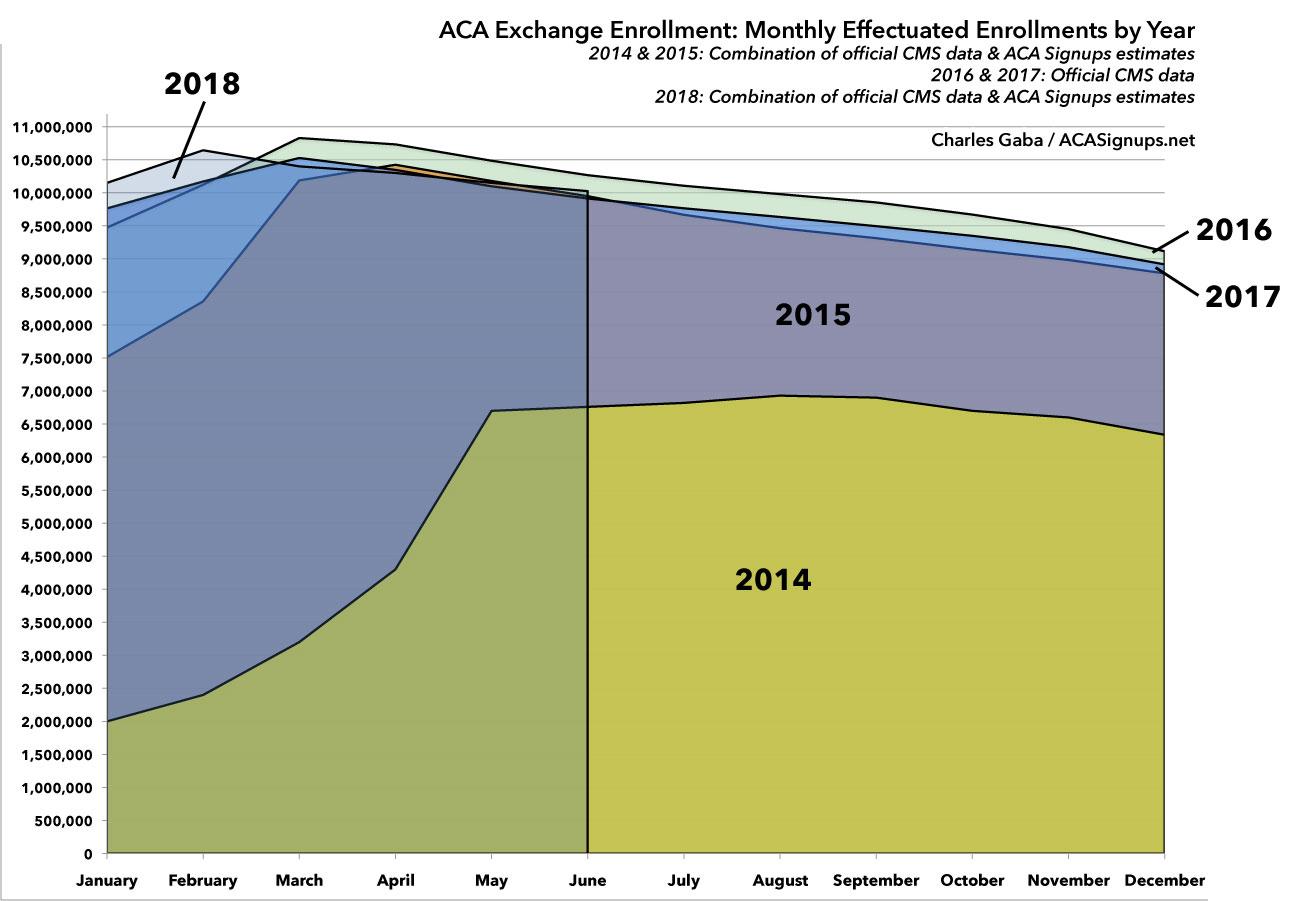