UPDATE: Who will Do the Silver Switcharoo, Part Two: How many by state? 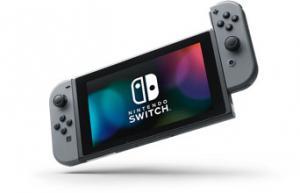 A week or so ago, David Anderson, Louise Norris, Andrew Sprung and I co-wrote an article explaining how different states were planning on handling 2018 individual market pricing given the massive uncertainty surrounding ongoing Cost Sharing Reduction (CSR) reimbursement payments.

Our timing couldn't have been more fortuitous: Less than 48 hours after we posted the piece, Donald Trump announced that, sure enough, he's finally following through on his threat to pull the plug on CSR payments, effective immediately.

It's still conceivable that the carriers will receive the CSR reimbursements for 2018 anyway, of course; in addition to the just-introduced bipartisan Alexander-Murray bill, eighteen state Attorneys General have filed for an immediate court injunction requiring the payments to continue. However, the odds of the first going through in time to reverse the already-baked-in 2018 rate hikes are almost zilch, and even if the injunction is granted, there's still a strong possibility that it'll be too late to reverse 2018 rates.

In other words, I'd say there's about a 95% chance at this point that the additional CSR cost load will be added to 2018 rates (even if the extra money is paid back to enrollees and/or the government starting in 2019). Our collective "CSR Load" spreadsheet seems to be a pretty good guide to how the states are gonna handle the situation after all.

With that in mind, where do things stand as of today? Well, there's been a lot of last-minute scrambling by several of the states and carriers which had previously crossed their fingers and hoped that CSRs would be made, and there's likely to be some more 11th hour changes to come, but as of 10am, Thursday, October 19th, 2017, here's the status of every state to the best of our collective knowledge:

UPDATE: Illinois' status changed from "Silver" to "Switcharoo". Breakout and tables have been updated to reflect this.

UPDATE: Massachusetts' status changed from "CSRs Paid" to "Silver Load". Breakout and tables have been updated to reflect this.

UPDATE: Utah's status has been corrected from Silver Load to Silver Switcharoo.

UPDATE: Maine's status has been changed from Silver Load to Silver Switcharoo

Here's a handy chart which shows (roughly) how different current enrollees should fare under these strategies depending on which state they live in:

So now the question is, just how many current individual market enrollees will be impacted by these scenarios?

I've done my best to estimate these. It's important to keep in mind that this involves quite a few estimates and assumptions, including:

I'm going to start with the ACA exchange-based enrollees, and will then look at off-exchange enrollees later.

OK, the first thing I need to know is how many people will actually still be enrolled in effectuated policies as of November 1st. Around 12.2 million people selected policies as of January 31st, but due to people failing to pay their premiums in the first place, dropping their policies partway through the year or being kicked off for other reasons (legal residency issues, etc), there's normally a gradual net attrition throughout the year. This is partly cancelled out by off-season enrollees increasing the numbers, but there's still a net loss by the end of the year. In past years this seems to have averaged a retention level of around 76% as of November, which means there will likely be roughly 9.3 million people still enrolled in on-exchange policies as of November 1st.

Next: How many of those folks are unsubsidized?

Well, according to the official CMS data for the 2017 Open Enrollment Period, as of mid-March, around 84% of all exchange enrollees received APTC assistance. It's true that the March CMS report was missing about 500,000 enrollees, but proportionately that shouldn't make any difference (APTC enrollees always hover between 83-85% nationally anyway). That leaves around 16% unsubsidized, or roughly 1.45 million people total.

That gives us a table like the following, which I've also separated out by CSR Load Type to see how many people we're talking about in each category:

However, there's one more thing to keep in mind about "Switcharoo" states: Not all unsubsidized exchange enrollees are in Silver plans. Some are enrolled in Bronze or Gold (a handful are even in Platinum plans, but those numbers are too small to even worry about). In order to find out how many unsubsidized folks are specifically enrolled in Silver plans (and who would thus need to switch to Bronze/Gold or Off-Exchange Silver), I took a look at the OE4 Public Use Files, which break out the 2017 Open Enrollment Data by various demographic criteria....including breaking out subsidized enrollees by Bronze and Silver (they don't list subsidized Gold/Platinum numbers, oddly, but I only need Silver anyway). Unfortunately, that particular worksheet is missing the 12 state-based exchanges, but I was able to plug in rough estimates for them.

However, Andrew Sprung has noted that while the 2017 Public Use File data I looked at suggested that it's around 59% of the total unsubsidized enrollees, the 2016 ASPE addendum report says that it was more like 40%, and that this ratio likely hasn't changed much year over year. He's made a convincing argument, so I'm going with his ~40% estimate.

Based on this, I've come up with the following: 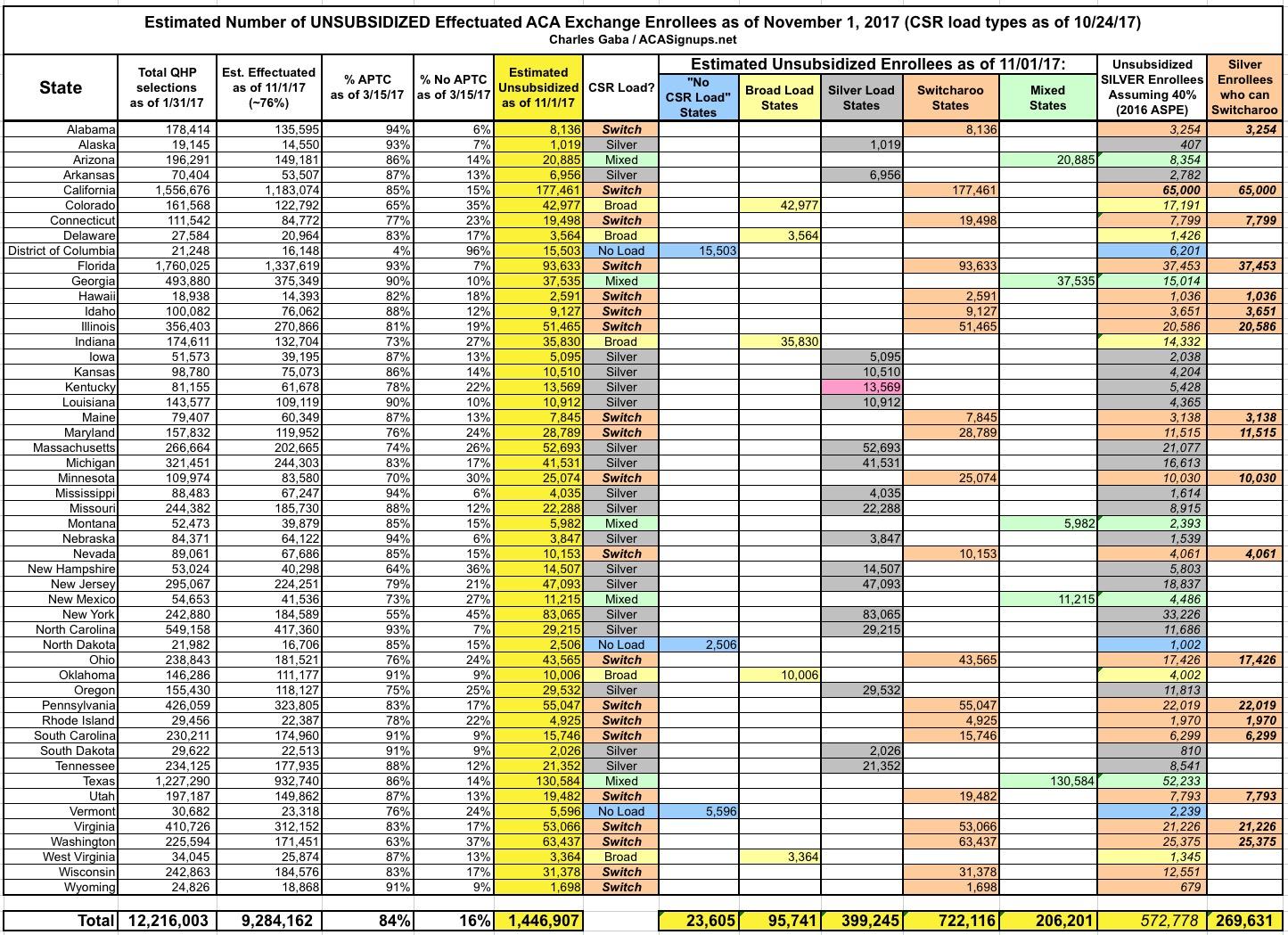 Of these, around 266,000 current unsubsidized, exchange-based ACA enrollees in Silver Switcharoo states will be able to switch to an off-exchange Silver plan (or any Bronze, Gold or Platinum plan, on or off the exchange) in order to avoid the CSR hit next year.

That all made sense, right?

NEXT, I have to add in the off-exchange enrollees. For this, I'm relying on estimates from two respected sources: Mark Farrah Associates and the Kaiser Family Foundation.

Kaiser doesn't have a state-level breakout of that number, and about 1/3 of the states didn't allow (or later discontinued) tranistional plans, so I've had to run some very rough proportional guesstimates to get the following: 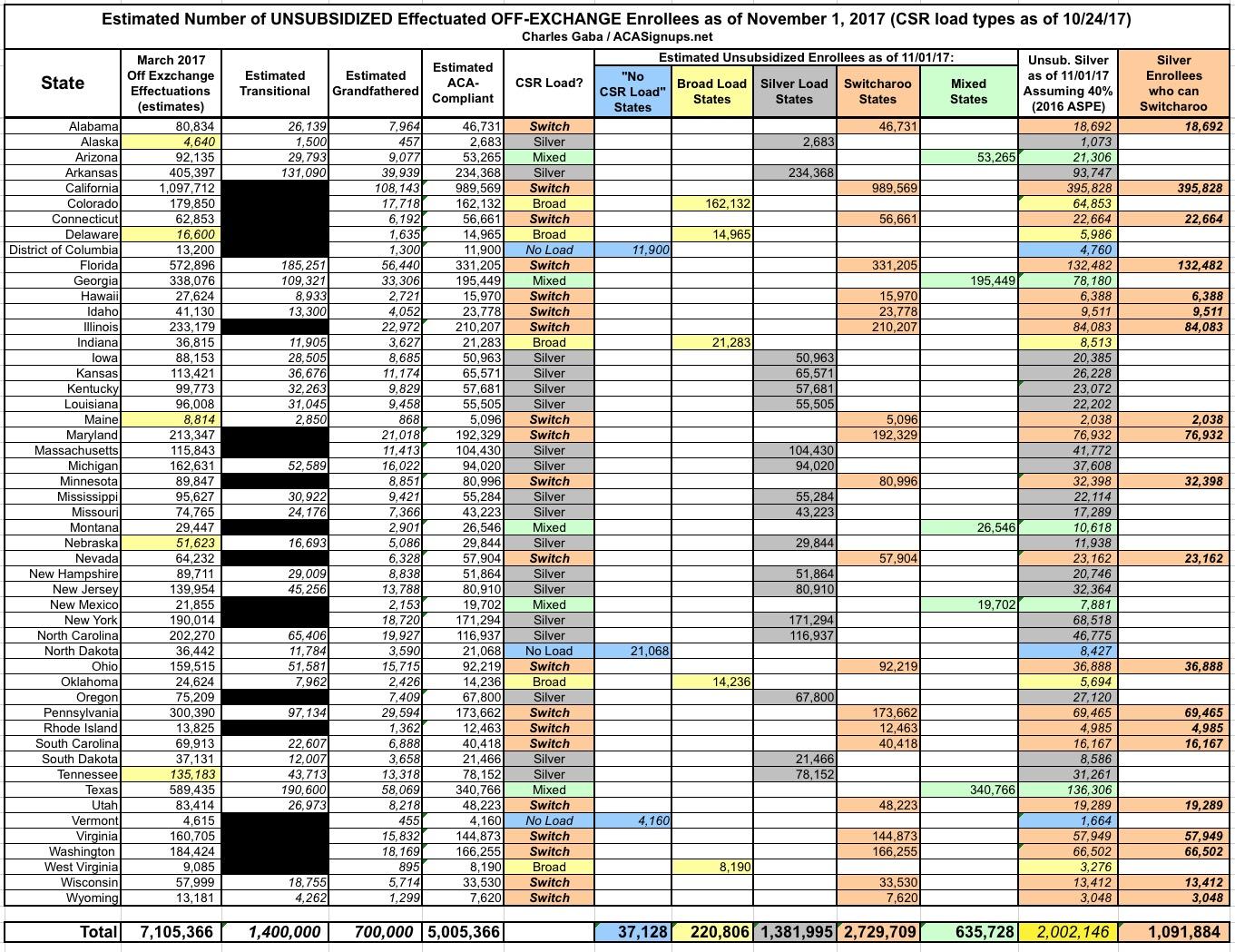 Again, the off-exchange numbers are very rough estimates, but assuming I'm fairly close, there should be a total of around 5.0 million people enrolled in ACA-compliant policies off-exchange.

OK, now it's time to combine the ON exchange and OFF exchange numbers: 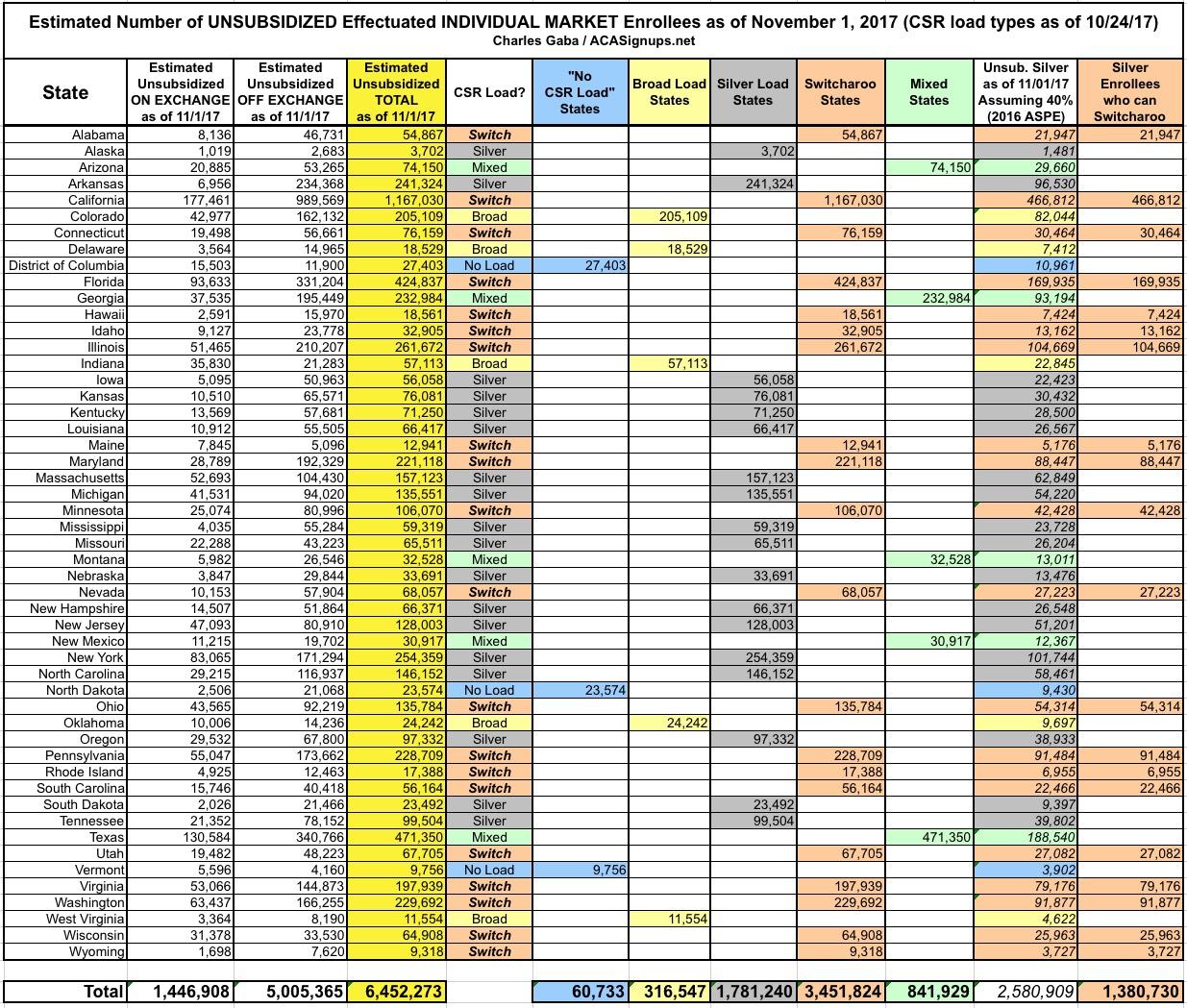 One More Time: Some of these numbers are shaky estimates, but assuming they're fairly close, the total individual market breakout (on & off-exchange combined) is roughly:

...and out of those 3.45 million "Silver Switcharoo" enrollees, around 1.38 million of them should be in Silver plans, which means most of them will have to switch to a different off-exchange silver (or a gold/platinum) plan to avoid the CSR hit.