In week three of the 2019 Open Enrollment, 748,244 people selected plans using the HealthCare.gov platform. As in past years, enrollment weeks are measured Sunday through Saturday. Consequently, the cumulative totals reported in this snapshot reflect one fewer day than last year. 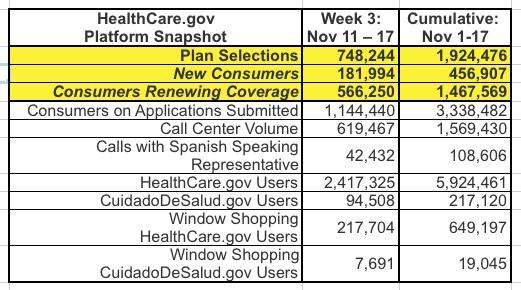 Adjusting for the 1-day difference however, HC.gov enrolled around 2.16 million people in the first 17 days last year, so the 2019 season is running around 11% cumulatively lower year over year for the first 17 days.

Enrollments were down 20% (adjusted for the 1-day difference) year over year in the first three days, 13% lower for the first 10 days and now just 11% lower for the first 17 days, so the gap is gradually being made up. My guess remains that the high-profile midterm elections played a role in damping down enrollments up through around November 8th, after which they shot back up again. However, even looking at the Week 3-only numbers, they're still down 6.3% year over year.

Keep in mind that I'm actually expecting HC.gov enrollment to drop around 5.3% year over year due to a combination of sabotage factors (around 460,000 people), as well as one positive development (Medicaid expansion in Virginia will likely siphon off around 85,000 exchange enrollees), while I only expect the 12 state-based exchanges to drop by around 2.3% (110,000 people).

UPDATE: David Anderson notes that it's possible that impending Medicaid expansion explains much of Maine's excessive drop-off as well. I've written about this before, but given outgoing Governor LePage's continuous refusal to actually implement it, I figured that it was gonna have to wait until newly-elected Governor Janet Mills takes office in January, which would likely mean no Medicaid expansion until March or April.

However, given the latest judicial ruling ordering LePage to implement expansion before he takes off, Anderson speculates that a lot of low-income Maine residents might be holding off on enrolling in exchange plans in anticipation of jumping onboard the Medicaid train instead.

So far, the limited data I have for state-based exchanges suggests that they're holding steady or actually have increased their enrollment numbers year over year, however. 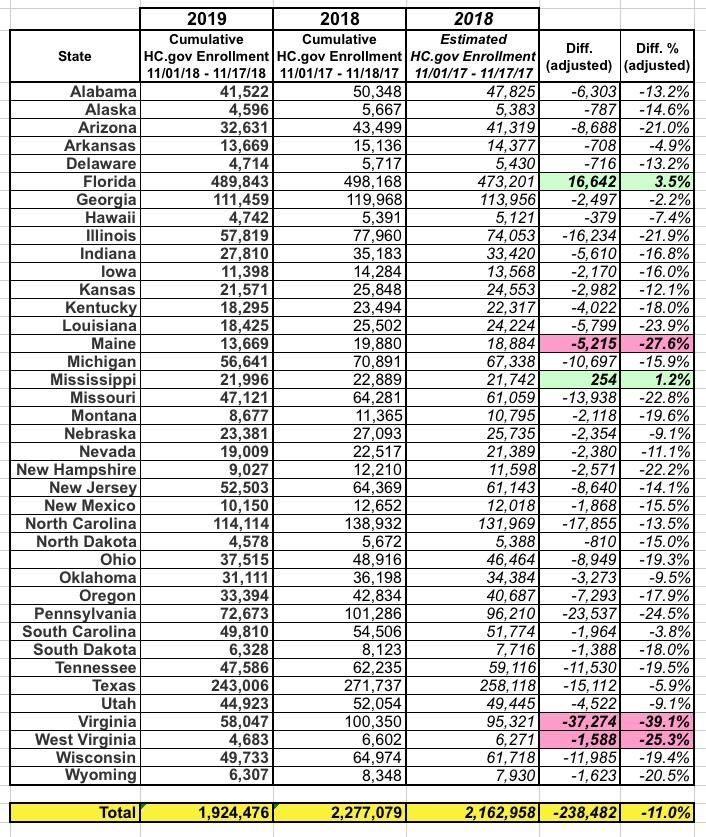