You may recall that well before the oral arguments, Senate Republicans, realizing that winning their case would cause political disaster for them, tried to slap together a sham "pre-existing condition protection" bill, which, as the Huffington Post's Jeffrey Young explained...

Yes, that's right: Guaranteed Issue would technically be protected, but the ACA's Community Rating, Essential Health Benefits and other protections wouldn't, which would make Guaranteed Issue itself effectively pointless: 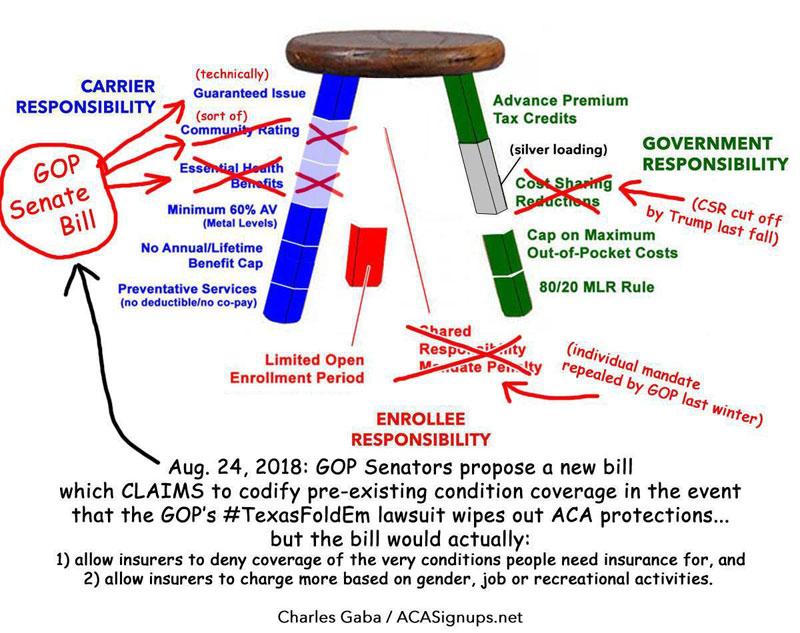 Being a political hack could explain why Judge O'Connor likely waited until after the midterms to issue his ruling...but there's still another problem even past the election: The 2019 Open Enrollment Period has already begun and is actually over 1/3 of the way over in most states. People are enrolling, the carriers have locked-in contracts through 12/31/19 with the federal and/or state governments on top of their contracts with individual policyholders.

UPDATE: Legal commentator and Case Western Law Professor Jonathan Adler (who was one of those behind the earlier anti-ACA "King v. Burwell" lawsuit) defends O'Connor by claiming that there's nothing wrong with him attending the event I linked to above. Perhaps not. This description of O'Connor's conduct during the oral hearings, however, don't exactly fill me with confidence, nor does his holding off on issuing his decision for as long as he has. If he surprises me and rules against the plaintiffs, of course, I'll be happy to eat crow.

You may recall that this is the same exit clause I was shouting from the rooftops about from the moment the 2016 election results came in and repeatedly for much of last year...except that time it was due to Trump's impending cut-off of Cost Sharing Reduction (CSR) reimbursement payments. Fortunately, the carriers, state regulators and state ACA exchanges put their heads together and came up with #SilverLoading and the #SilverSwitcharoo as a workaround which neatly resolved the issue. Unfortunately, this time around there would be no such safety release valve.

Something Must Be Done®!, the Republicans are saying (even though they're the ones who brought the lawsuit), and while the easiest and most obvious solution would be for the 20 Republican Attorneys General and Governors to drop the damned case, it's possible that GOP Senator Thom Tillis may have come up with another solution to a problem his party created in the first place (via Ariel Cohen of Inside Health Policy):

Republican senators who introduced a bill to protect the Affordable Care Act’s coverage of preexisting conditions are waiting on a ruling in the controversial ACA case in Texas before charting their next steps, which could include adding a severability clause to the health law. Sen. Thom Tillis (R-NC), who authored the bill, says he hopes to work with Democrats to tweak the bill, and has talked with lawmakers about adding a severability clause to protect the rest of the ACA should the Texas judge rule the individual mandate is unconstitutional.

...House Democrats already plan to introduce legislation at the beginning of the next Congress to add additional protections for preexisting conditions if the federal court in Texas rules parts of the ACA are invalid. Incoming Ways & Means chairman Richard Neal (D-MA) is leading the charge, but lawmakers have yet to release draft legislation.

However, it appears that Tillis may be going it alone on the GOP side here:

...Unlike Tillis, other Republican senators who co-sponsored the Ensuring Coverage for Patients with Pre-Existing Conditions Act said they were unaware of efforts to re-introduce the bill after the judge rules on the Texas case.

Now, here's the thing: I'm no lawyer, and I've asked Nicholas Bagley to chime in here, but it seems to me that since the entire #TexasFoldEm case hinges on the absurd idea that the Individual Mandate isn't "severable" from the rest of the law, passing a severability clause would immediately cause the entire lawsuit to collapse, making any other protections of existing ACA provsions unnecessary anyway. In other words, the "severability" clause should be the only provision necessary...any other Guaranteed Issue, Community Rating or EHB provisions for ACA-compliant policies would be redundant, and would only serve as bragging points for 2020 campaign ads (which would be the case anyway).

Then again, I could be wrong. Will update when I hear back from Bagley or other experts on this point.

UPDATE: Yup, according to U of M law professor Nicholas Bagley, I have it right--unless he's misunderstanding the bill, he agrees that a standalone "mandate severance" bill becoming law would indeed eliminate the lawsuit without needing any additional provisions. And of course if it did pass the GOP-held Senate, the Democratically-held House would have no problem voting for it as well as long as there were no poison pills attached to it.

Basically, the GOP could resolve this in 5 minutes if they wanted to.