UPDATE: Georgia: Believe it or not, there could be ANOTHER run-off election...

One of the biggest stories playing out nationally in the aftermath of the 2018 election is the Georgia gubernatorial election saga, in which corrupt-as-hell Republican Secretary of State Brian Kemp currently holds a narrow lead (50.3% vs. 48.7%) over former Democratic minority leader of the Georgia House of Representatives Stacey Abrams.

Under Georgia law, if no candidate ends up with more than 50% of the total vote, the top two candidates move on to a run-off election, so if Kemp's lead ends up dropping by around 13,000 more votes as the thousands of remaining ballots are counted, it's on to a run-off between the two.

In addition, there's a mountain of legal action being taken due to the jaw-dropping number of voter suppression actions and/or "mistakes" taken by Kemp and others in the state, including everything from allowing up to 6 million voter records to be exposed to blocking 53,000 new voter registrations from being processed to hiding 700 voting machines in a warehouse while thousands of voters had to stand in line for hours to "forgetting" to provide electrical power cords for electronic voting machines in Gwinnett County. Keep in mind that as Secretary of State, Kemp was in charge of the entire election/voting apparatus for his own race for Governor of the state.

Adding to the drama is Georgia's race to replace Brian Kemp as Secretary of State between a GOP state representative and a former Democratic Congressman. Neither one of them broke 50% either, which means Georgia's Secretary of State race will have its own run-off election in December. On top of that, under tremendous pressure, Kemp finally did what he should have done long ago by resigning as SoS a few hours ago:

Now that he has [resigned], Kemp will not oversee a recount, if there is one. Following Kemp's announcement he would resign, Deal appointed Robyn Crittenden as the interim secretary of state. Crittenden served for three years as commissioner of the Georgia Department Human Services.

(As an aside, I'm assuming that GA's Dept. of Human Services includes some amount of authority over Medicaid, CHIP and other healthcare-related programs, although that fall more under the umbrella of the Dept. of Public Health).

However, that's not what made me write this post. Via Amy O'Connor of Insurance Journal, THIS is:

The race for the next Georgia Insurance Commissioner was too close to call Wednesday morning, according to local media outlets in the state.

That's right: In Georgia, the state insurance commissioner is an elected position. Keep in mind that among other things, the insurance commissioner is reponsible for things like approving health insurance premium rate changes. For the record, unsubsidized ACA policy premiums shot up 41% this year in Georgia, and while they're only increasing about 4% next year, they would likely have dropped about 8% if not for the latest assaults on the law.

However, I'm getting a bit off track here...

Republican and former deputy insurance commissioner Jim Beck had a slight lead over Democrat and insurance agent Janice Laws in the state election to replace Georgia Insurance Commissioner Ralph Hudgens, who decided not to seek re-election this year, opening up the playing field for the state’s top insurance post for the first time since 2010.

As of 12:30 EST, the Georgia Secretary of State’s election results showed Beck with 50.5 percent of the vote to Laws 46.9 percent, with the difference in votes between the two being just under 140,000.

I just checked out the GA SoS website and the race seems to be pretty much where it was yesterday: 50.5% to 46.9%, a gap of around 138,000...but if it closes further, there could also be a run-off election between these two as well.

Why does this race have special interest for me? Because the current GA Insurance Commissioner, a Republican named Ralph Hudgens, appears to be a complete asshole:

...During his public service, [GOP candidate Jim Beck] served as Deputy Insurance and Safety Fire Commissioner for the State of Georgia, He was most recently chief of staff for Hudgens.

...In June, the Atlanta Journal-Constitution reported that Beck’s state work records had been subpoenaed by a federal grand jury.

Yes, that's right: Hudgens' deputy has a narrow lead to replace Hudgens...and seems to have his own legal issues to contend with.

On a completely unrelated note, like both Kemp and Hudgens, Beck happens to be a white dude...while like Abrams, Ms. Laws just happens to be...a black woman. Huh.

For what it's worth, Ms. Laws just posted this to her Facebook page 20 minutes ago:

I should probably also mention that I have one other peripheral connection to this race: Back in January I publicly endorsed healthcare policy/advocacy worker Cindy Zeldin, who was running for insurance commissioner but lost to Ms. Laws in the primary.

Now, I have to be realistic here: The odds of this race going to a run-off are slimmer than the Governor's race doing so. Here's what it would take, assuming none of the currently recorded votes change: 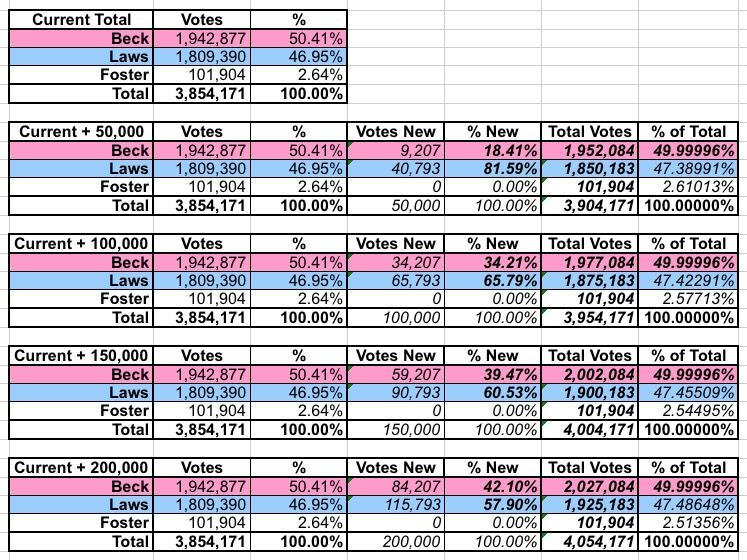