Wisconsin: Add Scott Walker to the list of GOP candidates hiding their lies behind family members

A few days ago, Jonathan Cohn of the Huffington Post wrote about a new phenomenon sweeping the nation: Republican candidates, all of whom have repeatedly either voted to repeal the Patient Protection & Affordable Care Act or who have repeatedly called for it to be repealed, are suddenly falling all over themselves to try and claim that they support patient protections for those with pre-existing conditions...usually by invoking family members who suffer from various ailments.

The excuse being used by most of these candidates is that the American Health Care Act (AHCA) which every one of them voted for (except Hawley, who's a state attorney general, not a member of Congress) technically includes a provision which officially doesn't allow insurance carriers to deny selling healthcare policies to people with pre-existing conditions, which is one of the main provisions of the ACA. They then use that fig leaf to laughably claim that this translates into "protecting" coverage of pre-existing conditions, which isn't the same thing at all.

Once again, let's look at the ACA's 3-Legged Stool, which effectively now has only two legs plus the World's Most Expensive Shim® now that Congressional Republicans have repealed the individual mandate penalty: 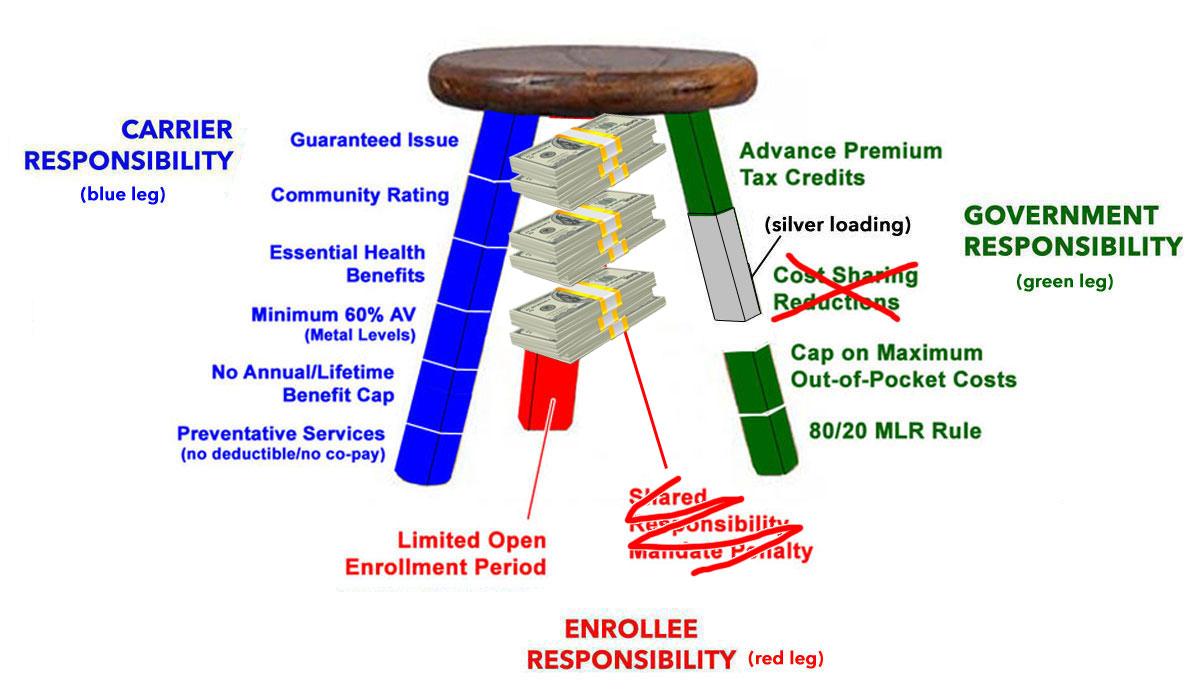 Let's set aside the stack of cash which has replaced most of the Red Leg for the moment (that money represents the additional tax subsidies needed to fill in the 9% premium hike from the adverse selection caused by the mandate being repealed). Take a look at the Blue Leg for now:

The AHCA, which nearly every Republican member of the House and Senate voted for, would have changed the Blue Leg into this:

In other words, the insurance carriers would have had to sell a policy to anyone who wanted one regardless of medical condition...but could charge those with pre-existing conditions insanely more for those policies, or alternately could simply sell them a policy which covered everything except the very condition which the enrollee needed medical treatment for.

How much more might coverage for those conditions cost under the AHCA? Well, the Center for American Progress crunched the numbers last year, shortly before House Republicans passed the bill, and came up with the following estimates for various common types of pre-existing conditions: 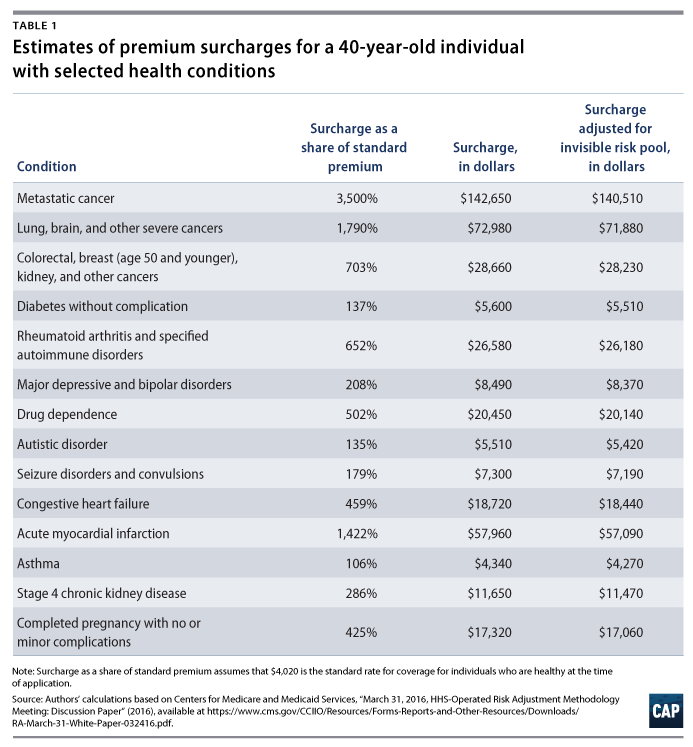 Also note that the surcharges above assume average annual premiums of around $4,020/year, or $335/month. The actual average unsubsidized premium as of 2018 is around $600/month, due in large part to Trump's CSR cut-off stunt, which means you'd have to increase the sample costs above by nearly 80%.

So what does Wisconsin have to do with any of this? Well, Republican Governor Scott Walker, up for re-election himself in three weeks, has jumped onboard the gaslighting train as well...and once again, he's using his family members as human shields to do so:

Now, it's true that Walker didn't vote for the AHCA or any other ACA repeal bill, seeing how he's a Governor, not a member of Congress. However, he has strongly opposed the ACA since day one, and more to the point, there's this:

House GOP members narrowly passed the bill Thursday that would roll back former President Barack Obama's health care law. Part of the bill would allow states to seek waivers exempting insurers from Obama's prohibition on higher premiums for people with pre-existing problems. States could then use federal dollars to fund government-operated insurance programs for pools of expensive patients.

Walker, a Republican, told reporters that he would consider seeking such a waiver, saying Wisconsin has run high-risk pools well in the past.

"We had a very effective program before," Walker said. "I think a lot of people were disappointed that Wisconsin was not allowed to have that under the Affordable Care Act, under Obamacare. So that's something we'd certainly consider."

The thing is, the high-risk pool which Wisconsin had prior to the ACA, while among the better ones available, still pretty much sucked:

...it served only some of the people who were eligible, and for it to be viable nationally, "you would have to put down a whole lot of money, more than has been put in the House bill so far," she said.

...At the end, it insured 21,000 people and was regarded as among the most successful programs in the country, even though not everyone with preexisting conditions who needed coverage could afford it. Also, Wisconsin’s high-risk pool did not contain the same coverages as Obamacare plans -- for example, it had a lifetime limit for benefits, whereas Obamacare does not.

...Kaiser’s Pollitz told us that if medical inflation were taken into account, the Wisconsin high-risk pool costs would generally be higher than the current Obamacare rates. And high-risk pools expert Jean Hall, a Kansas University health policy professor, told us that low-income people who qualify for subsidies under Obamacare are getting more coverage for less money than they were with Wisconsin’s high-risk pool -- even if there were cases where people with higher incomes got a better deal with the pool.

In addition, according to The Arc of Wisconsin:

...On the average, HIRSP premiums were 110% of what a person without a pre-existing condition would have paid in the individual health market. However, some plans were much more expensive; premiums in plans with a lower deductible could be 150% as much as the average in the individual health market. In addition, HIRSP premiums covered only 60% of medical costs and were kept artificially low because health care providers and insurers were required to pay an assessment that lowered premiums by at least 40%. Even with the subsidized rate, the costs for coverage through HIRSP were still prohibitively high for many middle and lower income Wisconsinites.

...Women up to age 55 were required to pay higher premiums than males of the same age.

...Most people who entered the high-risk pool had a pre-existing condition. The high-risk pool still had a six-month waiting period which could be detrimental to one’s health. Most people accessing the services had chronic health conditions and significant ongoing medical expenses. Many were unable to afford the health care and supports they needed during the six month waiting period.

Many Wisconsinites with significant medical needs were NOT eligible for HIRSP, including people with disabilities or chronic medical conditions whose employer sponsored insurance was not adequate for their needs. For example, many small businesses offer only catastrophic insurance coverage.

In short, even the best pre-ACA high-risk pools had most of the same problems that people complain about under the ACA and more...but were even worse, because the funding of the program was subject to the whims of the state budget, which has to balance every year, as opposed to the federal budget which has a lot more flexibility (too much, some would say).

The point is that high-risk pools are an illusion in terms of being an appropriate substitute for the ACA--and in fact, the ACA was created in large part in order to eliminate the very problems faced by high-risk pools. I laid all of this out in more detail in a lengthy blog post last year, as well as in the video explainer at the top of this post.

In addition to pushing for the very waiver which would have ripped away pre-existing condition protections that he now claims he wouldn't have done, Scott Walker is also lying in a different way. Remember the #TexasFoldEm lawsuit? The one brought by 20 GOP Attorneys General and/or Governors?

...The lawsuit argues the entire law should now be struck down.

...Walker spokeswoman Amy Hasenberg told the Milwaukee Journal Sentinel that Walker authorized the lawsuit "because it questions the constitutionality of Obamacare."