When Maryland insurance carriers originally submitted their proposed 2019 premium changes back in May, it looked pretty grim...they were expected to average around 29.5% statewide for the ACA-compliant individual market., increasing from around $631/month on average to roughly $817/month for unsubsidized enrollees.

Thanks to swift, bipartisan action on the part of the Democratically-controlled Maryland state legislature and the Republican Governor, Maryland was able to pass several bills which partially negated or cancelled out Trump/Congressional Republican sabotage of the Affordable Care Act. In particular, they passed laws which locked in current restrictions on both short-term plans and association health plans (the types of "junk policies" which Trump is pushing hard to expand upon)...along with an extremely robust reinsurance program.

Thankfully, that program was finally approved a few weeks ago, and the estimates were that it was going to to reduce 2019 average premiums by around 30% statewide...effectively cancelling out all of the projected increase.

Here's what the Maryland landscape looked like before the reinsurance program (and the short-term/association plan restrictions) were put into place:

TODAY, however, Louise Norris of healthinsurance.org broke the news that the actual impact of the new reinsurance program will be even more effective than that:

On May 7, 2018, the Maryland Insurance Administration published the average rate increases that Maryland insurers have proposed for 2019. However, those proposed rate increases did not account for the reinsurance program that the state had proposed to CMS, because it had not yet been approved. Maryland submitted a proposal to the federal government in late May, seeking federal funding for a reinsurance program (described below). The federal government deemed the proposal complete in early July, and granted approval in late August.

At that point, insurers filed revised rates, which are available here (click on “filing info” and then the “post-1332” actuarial memos and certifications). The revised rates are considerably lower than the initially proposed rates had been. The state expected that the reinsurance program will result in premiums that would be 30 percent lower than what insurers have thus-far filed for 2019, but that was a rough projection.

I dug up the "post-1332 waiver" versions of the filings, and sure enough, the revised proposed rates are even lower on average than the state projected they would be!

(Norris's article puts the average reduction at 13.7% vs. 13.4%. The difference seems to be due to us having different estimates of the relative market share of each carrier.)

It's important to keep in mind that a large chunk of Maryland's rate increase is still due to the ACA mandate being repealed (along with the CSR cut-off from last year, of course). Mandate repeal specifically seems to be causing 2019 rates to be around 6 percentage points higher than they would be otherwise.

In other words, instead of a 13.4% rate reduction with sabotage, Maryland residents would otherwise be looking at nearly a 20% rate drop if not for the mandate being repealed.

In other words, while unsubsidized enrollees will pay around $1,000 less next year on average than they are this year (and an insane $3,200 less than they'd be paying next year without the reinsurance program in place), that's still nearly $500 per enrollee more than they'd have to pay if the mandate hadn't been repealed.

Even so, this is still a very good thing overall.

UPDATE: Here's a graph to give you a better idea of just how dramatic an effect Maryland's reinsurance program is now expected to have on next year's average premiums: 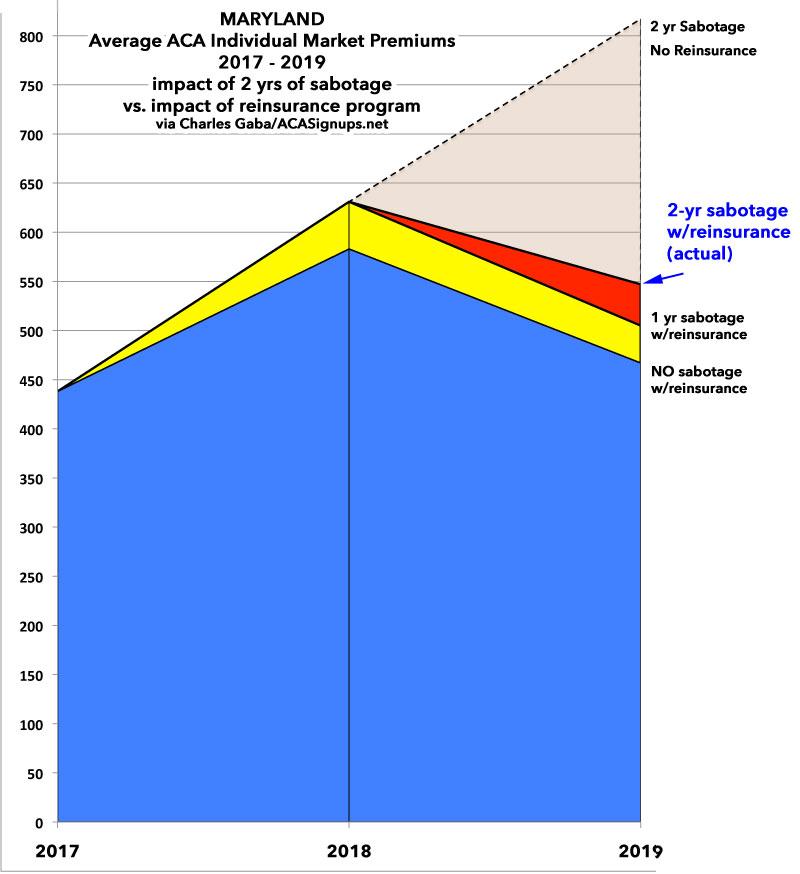 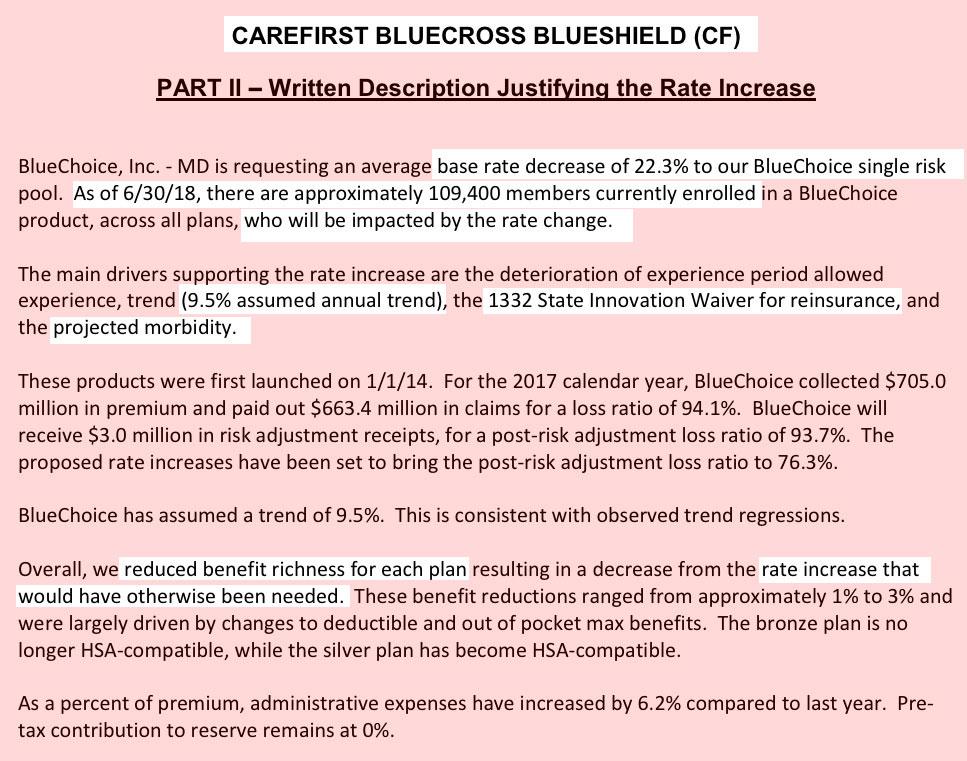 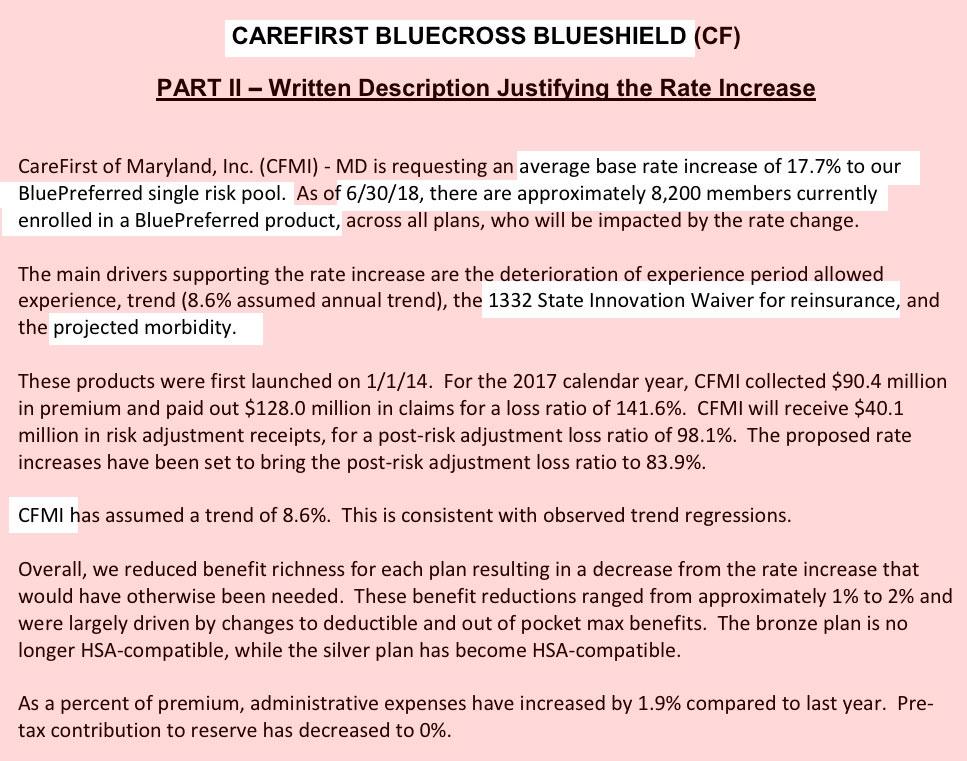 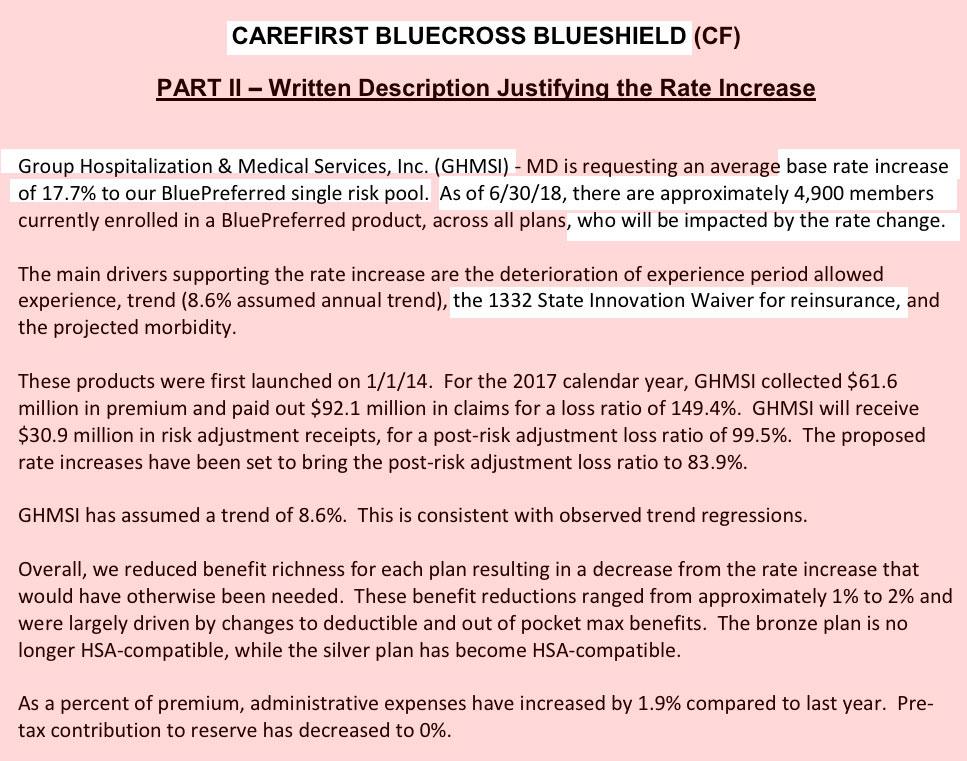 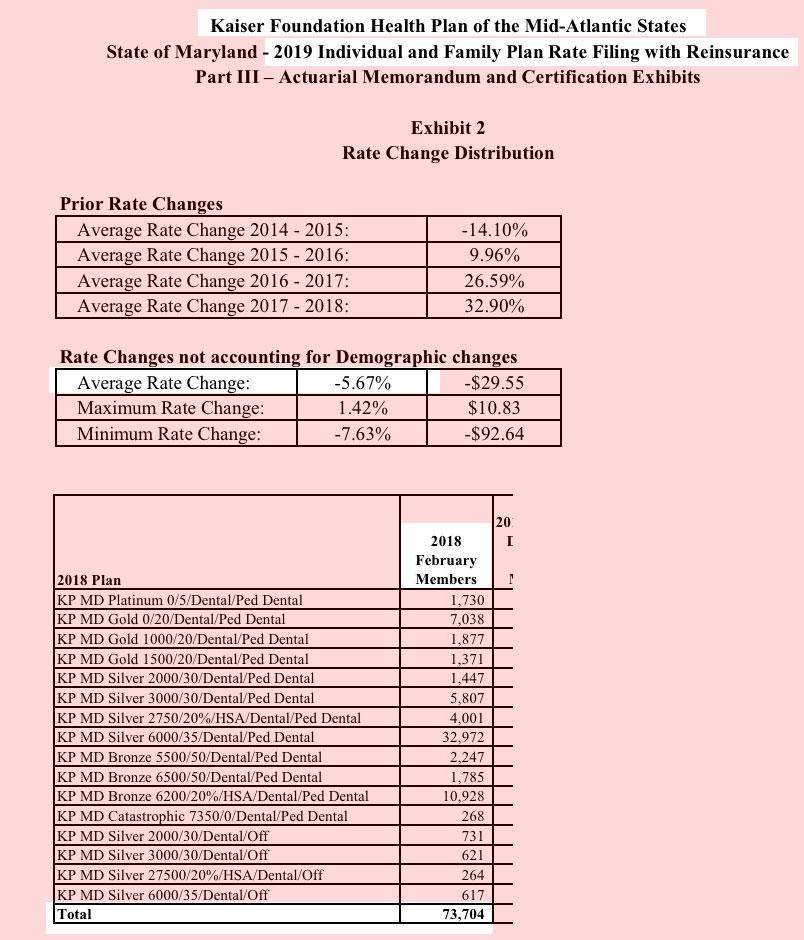 UPDATE 9/21: OK, it turns out those weren't the final approved 2019 rates; on a conference call this morning, Maryland Insurance Commissioner Al Redmer, Jr. discussed the approved rates for both Maryland's Individual and Small Group markets. They made some additional changes at the end as shown below. In addition, he confirmed that the ACA Mandate Repeal factor is exactly 5% for all four carriers (the three CareFirst divisions as well as Kaiser), as opposed to 5% for one of CareFirst's divisions and 10% for Kaiser. This reduces the statewide #ACASabotage impact slightly, as shown below:

For unsubsidized enrollees, that's a $32/month difference, or $379 for the full year.