Last week, however, the New Mexico Insurance Commissioner released the approved 2019 rate filings, and it paints a very different picture (via the Lexington Herald-Leader):

Average rates for purchasing health insurance will decrease by about 1 percent on New Mexico's subsidized health care exchange in 2019, in a shift from choices a year ago.

...Average premium increases on the exchange set records at the start of 2018, partly as a result of President Donald Trump's decision to pull the plug on federal payments that reimburse insurers for reduced copays and deductibles they're required to provide to people of modest means. In New Mexico, premiums for mid-level insurance coverage in 2018 shot up by more than 35 percent.

...Marlene Baca, CEO of the nonprofit on-exchange insurance provider New Mexico Health Connections, said Wednesday that the cooperative has focused on its management of medical costs in the wake of recent regulatory upheaval.

Health Connections' average rates on the exchange are decreasing by 2 percent in 2019.

...Rates will decreased by an average of 6 percent under Molina Health Care, remain unchanged under Blue Cross and Blue Shield, and increase by 4 percent under Christus Health Plan, according to state insurance regulators.

...President Donald Trump and the GOP-led Congress have repealed the penalty for people going uninsured, starting in 2019. Many experts believe that may increase the number of uninsured nationwide.

The Trump administration is pushing forward with short-term, limited-duration insurance and association health plans as an alternative to comprehensive but costly policies under the Affordable Care Act. Those options are not yet available to consumers in New Mexico.

Huh. The surprising thing here isn't that the approved rate changes have dropped--that's pretty common after negotiations between the carriers and the state regulators. What's surprising is how much they've dropped. Plugging the data from the article into the spreadsheet gives a weighted average 0.6% increase, but the article itself claims a 1.0% net drop year over year for unsubsidized enrollees. I'm not sure what accounts for the discrepancy; it could be Presbyterian Health...the article states that they withdrew their proposal to join the exchange...but that still leaves them with over 12,000 off-exchange enrollees. As you can see in the filing screenshot below, they slightly reduced their request from 18.5% to 17.4%. From what I can tell, some of the screenshots come from the requested filings while others are from the approved versions.

Given the small gap and the certainty of the Herald article, I'm going to defer to them for now and go with a 1.0% average drop with sabotage vs. a 7.0% drop without.

Either way, New Mexico regulators have reduced approved 2019 premiums from +10% to effectively FLAT year over year...which still doesn't change the fact that rates would still be around 6% lower if the mandate hadn't been repealed and #ShortAssPlans weren't being expanded by the Trump Administration. That's still roughly a $32/month difference, or $379 more per unsubsidized enrollee next year. 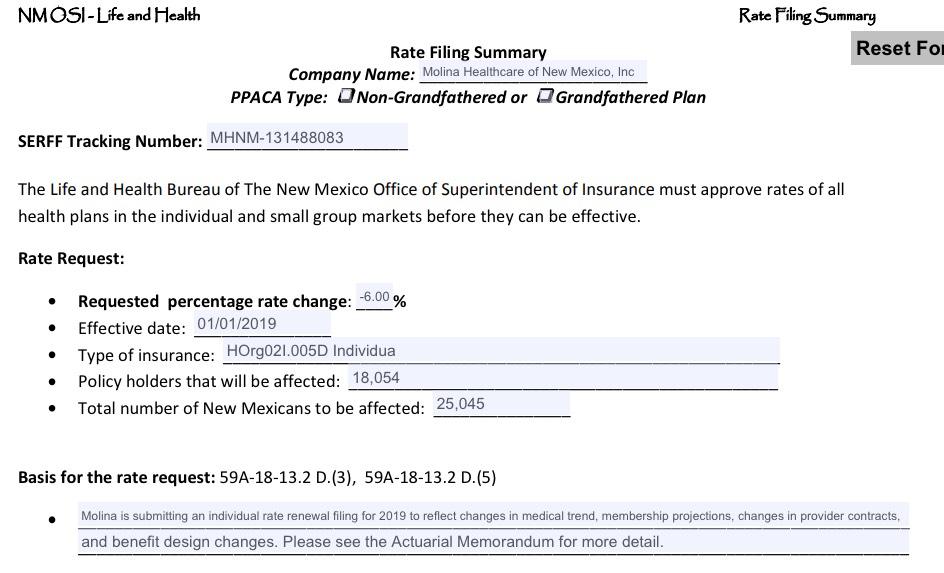 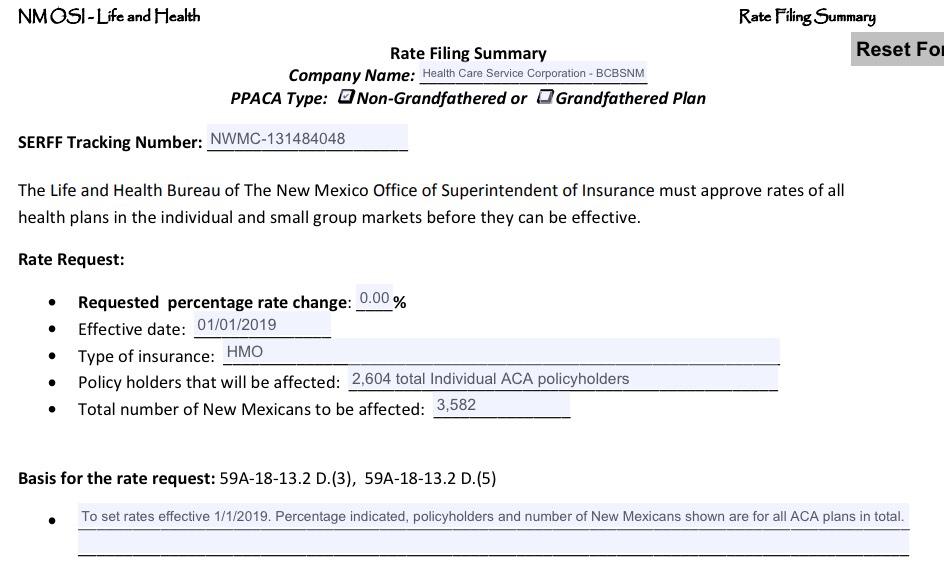 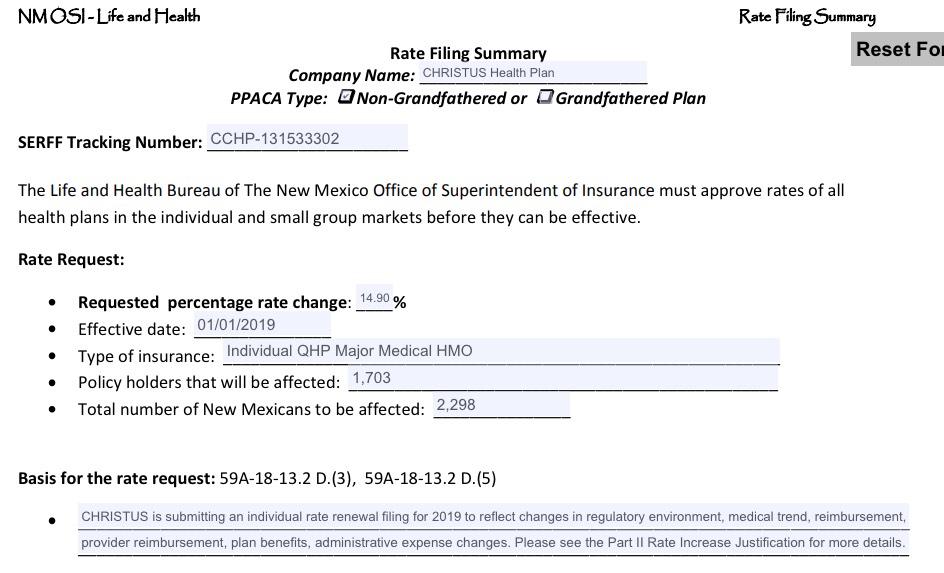 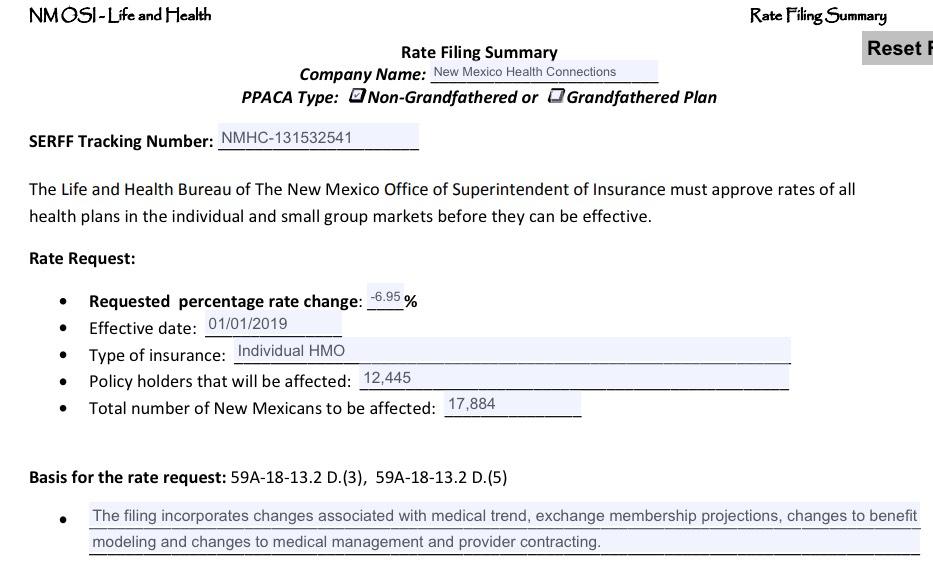 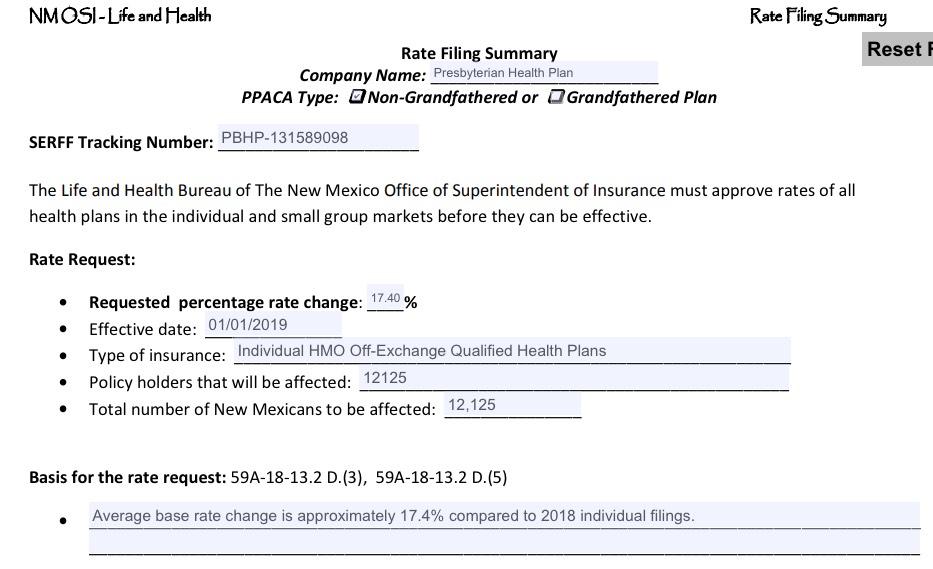