Here's the actual requested rate changes in question. Out of 14 carriers total, two of them (CDPHP and Healthnow NY) didn't plan on baking in some amount of a cushion to counter mandate repeal anyway, and one more (MetroPlus) tacked on a fairly nominal 1.1 percentage points. The rest, however are pretty significant, with Fidelis asking for a rather stunning 25.9% increase specifically tied to mandate repeal: 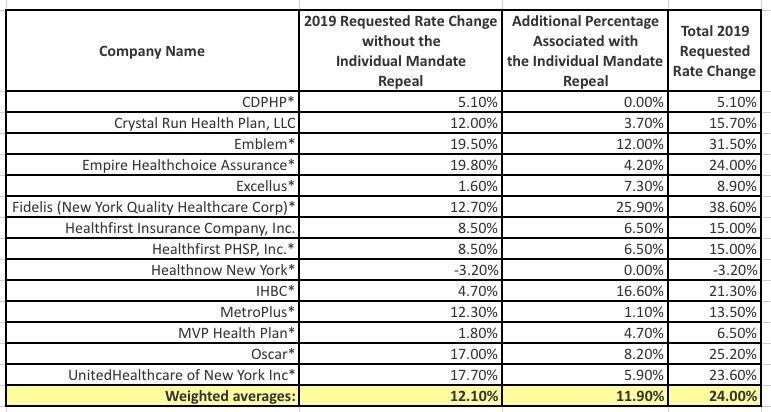 Now, as I noted earlier Monday, one would normally expect this to cause at least a few of the carriers to run fleeing for the hills. This is exactly what happened last fall in North Dakota, when Medica, one of the four carriers participating in the ACA indy market bailed after the state insurance commissioner refused to let them raise premiums to cover their impending Cost Sharing Reduction losses even though it was obvious that Donald Trump intended on cutting CSR reimbursement payments off (and which, of course, he did do just a few weeks later).

However, last summer, NY Gov. Cuomo issued an executive order tying MCO (Medicaid Managed Care Organization) contracts to ACA exchange participation. This would normally be a good thing, but in this case it means that any carrier which has won an MCO contract is required to stick around the NY exchange but isn't allowed to bake mandate repeal into their 2019 premium rates, which means they're stuck between a rock and a hard place: They can't leave but they may also be guaranteed losses if they stay.

Furthermore, as my friend Wesley Sanders reminded me, the deadline for carriers to completely pull out of the NY market was...June 30th. That means that even carriers without MCO contracts on the line apparently can't drop out now. They can drop out of the on-exchange market but would be required to keep at least a few policies available off-exchange. Of course, they might just pull a Freedom Life, in which they deliberately "offer" exactly one Bronze or Comprehensive policy in a single county off-exchange to technically fulfil their legal obligation to remain "on the market", but then effectively bury any knowledge of that policy's availability.

Even so, this still leaves the question of what the hell Andrew Cuomo was thinking this afternoon. I've been pondering this for the past few hours, and after discussing it with someone who seems to have pretty good insight into the situation (who wishes to remain anonymous), I've developed the following theory.

I need to stress that this is completely speculative.

In other words, there's a good chance that New York regulators might have been planning on cutting down some of the requested increases listead above anyway...both with or without the mandate being in place.

What made me think about this possibilty? Well, if you look at the 28 states which have submitted preliminary 2019 rates so far, the thing which sticks out in my mind is that there's only 8 states seeking double digits, and New York's 24% is the second highest in the country (right below Maryland)...both with and without the mandate penalty in place. MAYBE both the 12% and 24% are legitimate projections by the actuaries...but maybe they simply overestimated on both fronts. Nothing neferious here, actuarial science isn't exact, which is why state regulators have a review process in the first place. I'm just saying that it's possible that there was some elbow room for them to cut rates down regardless of Cuomo's announcement today.

AGAIN, I have absolutely no idea if this is the case...but let's suppose it is. Let's further suppose that Cuomo knew this (or at least suspected it).

If that's what happened, then his move today makes sense. He'd be able to score political points ("See? Cuomo is fighting to keep our rates low!") by taking credit for something which was already going to happen anyway.

Anyway, it's a theory. If you have a better one, I'm all ears.

SIDENOTE: Someone else suggested that Cuomo may be secretly planning to reinstate the individual mandate penalty via executive order, either soon or even after the primary election. I find this to be even more farfetched than my own theory above, especially since I suspect he doesn't have the legal authority to do so without the state legislature passing a law first, but I don't know enough about New York state law to hazard a guess. Anything's possible, I suppose.

If he's legally allowed to do so, it's even conceivable that he could reinstate the penalty after Open Enrollment starts as a sort of emergency measure. The 2019 rates would already be baked in at "mandate levels", so he'd simply be filling in the other half of that equation. Again, not likely, but nothing about his announcement made much sense without something like this in the works.