UPDATE: In which Alexandria Ocasio-Cortez rightly takes me down a peg while inadvertently raising an interesting point

So, last night this happened:

Hmmm...the wording here is interesting: “Improved and expanded” Medicare for All. If it’s “for all” isn’t “expanded” redundant? Or is this a nod towards “for all who want it”? Cc @colinb1123

We‘re fighting for Improved & Expanded Medicare for All.

We‘re fighting for dignified retirement for our elders, and a Green New Deal for our children.

We’re here to fight for our future:https://t.co/piU7pXIL1u

To her credit, Ms. Ocasio-Cortez herself (AOC) cleared things up promptly and succinctly:

Improved and Expanded Medicare for All is the full name of HR676.

...at which point I felt pretty foolish, since of course that is the official title of the single payer bill which was introduced each and every year by former Congressman John Conyers (the sponsorship baton for HR676 has since been passed to Keith Ellison). I've written about HR676 before; I had just forgotten the official title. Kudos to Ms. Ocasio-Cortez.

The response from everyone else, on the other hand, has fallen into three main categories:

Don't get me wrong: I deserve a bit of ribbing for not remembering the official name of HR676, and yes, it's a bit ironic that a healthcare wonk who supports universal coverage (preferably via single payer) would miss that.

However, this incident also raises a couple of interesting underlying points:

But someday, a reckoning will come. When Democrats hold power again — especially control of Congress and the White House — they will be expected to actually deliver on these Medicare-for-all promises. And when that day arrives, the party will have to decide whether they want to blow up America’s current health care system to build something new or figure out a less disruptive path, but risk falling short of truly universal coverage.

So even now, there is some jockeying among Democrats to define those three little words.

As popular as Medicare-for-all is, the slightly more vexing question is what it actually means.

Historically, Medicare-for-all has meant single-payer health insurance, a national government-run program that covered every American and replaced private coverage entirely, similar to the government-run health care programs in Canada and some European countries.

Then-Rep. John Conyers (D-MI) first introduced the Expanded and Improved Medicare for All Act in 2003. Conyers has since been disgraced by sexual harassment allegations but the idea lives on. It’s now sponsored by Rep. Keith Ellison (D-MN) and it is still a single-payer proposal. So is Sanders’s Medicare-for-all bill, a cornerstone of his unexpectedly resonant 2016 presidential campaign.

But these days, other plans are falling under the Medicare-for-all umbrella. Some progressives, like [PCCC co-founder Adam] Green, are even comfortable with the term being applied to the various proposals to allow all Americans buy into Medicare. Some of those plans used to be branded as a “public option”; they would not end private insurance that more than half of Americans get, usually through work, as a true single-payer would. But these plans would also not provide the same guarantee of universal coverage that a single-payer system does.

THAT was what I was asking in my original question: I misunderstood AOC's tweet, wondering whether or not she was indicating a slight shift towards more of Medicare as an optional buy-in proposal (which is how the Center for American Progress' Medicare Extra for All plan would work). If that had been what she meant, it would have been pretty significant, especially coming from a self-described Democratic Socialist.

Well...it wasn't, and she shut me down on that point quickly and concisely. As I noted in response:

Improved and Expanded Medicare for All is the full name of HR676.

Thanks for the quick response. Since I have your ear at the moment, a follow-up Q: The best-case scenario for enacting M4A would presumably involve it being signed into law sometime in 2021, beginning implementation in 2022 and full transition by 2025, correct? 1/

If so, my question is what you see as the best improvements to the *current* healthcare system between your hopefully taking office in January 2019 and M4A being fully implemented by 2025? Thank you. 2/

(addendum: I know that M4A would include some transitional period provisions as well, but I have to imagine there’d still be some additional piecemeal bills needed to tide things over re. the ACA exchanges, etc as well). 3/3

My follow-up question was reasonable and respectful. I have yet to receive a response from AOC, not that she's obligated to provide one.

Twitter being Twitter, of course, I've been accused of being a troll, of being stupid, of hating AOC, etc etc. Such is life. As former Bernie Sanders campaign staffer Melissa Bryne noted:

Ups to @charles_gaba + @Ocasio2018 for chatting. Boos to everybody else. https://t.co/HiFL3YsFaq

Not every exchange between people is an attempt to "own" or "burn" them, folks. Sometimes a question is just a question, and an answer is just an answer.

(As an aside, I also find it mildly interesting that HR676 is being pushed instead of Bernie Sanders' bill (S1804, the official title of which is "Medicare for All Act of 2017"). I presume the reason AOC is pushing HR676 instead of S1804 is because she's running for the House while his bill was introduced in the Senate.)

UPDATE: Huh. This is an interesting coda...moments ago I received an email from Ms. Ocasio-Cortez promoting her going on a road trip to Kansas with Bernie Sanders to promote a candidate running for KS-03: 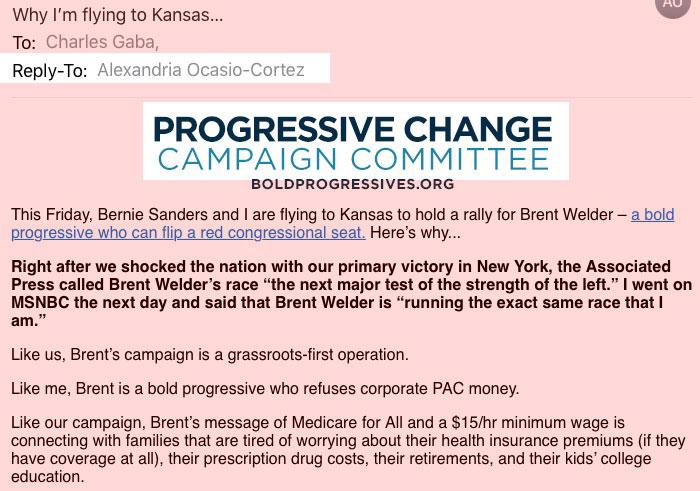 Nothing special there, right? Right. Except for one thing...notice who actually sent the email: The Progressive Change Campaign Committee. Take another look at that Vox article by Dylan Scott above. Here it is again: 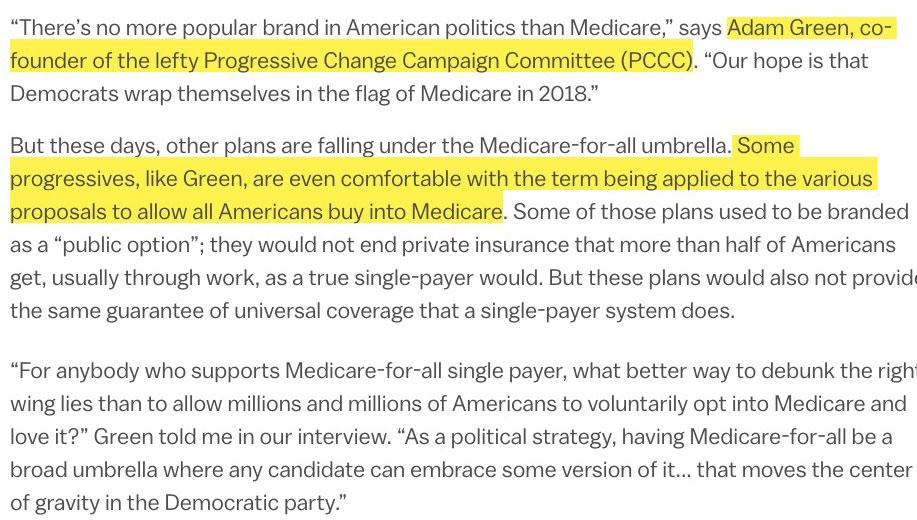 The guy who co-founded the progressive organization which is sending emails out under AOC's name is himself comfortable with "Medicare for All" being used to describe Medicare as a PUBLIC OPTION as opposed to being made mandatory for everyone.

Obviously that doesn't mean that AOC has to feel the same way--there's nothing wrong with her sticking to her guns on the M4A bill being 100% mandatory--but it does support my original curiousity about what, precisely, she means when she refers to "improved and expanded" Medicare for All.

The larger point is, as Scott notes in his article, that there's a wide variety of thought as to what "Medicare for All" actually "should" mean even within the progressive community itself.

My original tweet was simply trying to ascertain whether AOC is dead-set on, as I noted, it being "100% Universal, 100% AV, 100% Comprehensive, 100% Mandatory, $0 Out-of-Pocket" (which is how both HR676 and S1804 are designed) or whether she was indicating some willingness to accept it being an optional decision for at least some portion of the population (which, again, is how many of the competing proposals on the table would work).