Now we move onto the second report released by CMS this week: The "Subsidized/Unsubsidized Enrollment Trend Report". If you set aside the anti-ACA digs from the Trump Administration, there's some fascinating data to be found, including what they claim to be one of the Holy Grails of the ACA individual market: Supposedly accurate data on the number of off-exchange ACA-compliant enrollees across the first four years of the ACA exchanges! Yes, I know, it's exciting, heady stuff.

OK, first, their key findings (and again, these supposedly all include off-exchange ACA-compliant individual market enrollment along with on-exchange enrollees:

No surprises here. If you raise premiums by 21%, then yeah, those who have to pay full price are gonna be more likely to drop their coverage.

Again...not terribly surprising. Every year, as premiums increase, those who have to pay full price are a lot more likely to drop coverage than those who only receive subsidies to cover the bulk of the cost. This was true before the individual mandate was repealed and will only get worse now post-repeal.

Well, again...not surprising, since 2017 saw a significant average premium increase. I'm sure the problem has gotten even worse this year (thanks to CSR payments being cut off last fall), and will be worse yet next year with the mandate having been repealed and #ShortAssPlans being unleashed everywhere.

The methodology of the report is interesting--for years, I've spent countless hours trying to hunt down the elusive off-exchange enrollment data with limited success. Sometimes I find it, but it's mixed in with grandfathered or transitional enrollees. Sometimes it's a vague estimate. Sometimes it's way outdated. Here's what the CMS report says about where they got their data:

The enrollment trends in this report cover individual health insurance market plans that participate in the PPACA federally operated risk adjustment program. These include individual health insurance market plans sold on and off Exchange, but exclude grandfathered plans, transitional plans, excepted benefit plans and student health insurance plans. The analysis excludes data on plans from Massachusetts and Vermont, because both states are considered to have merged their individual and small group markets for purposes of the risk adjustment program.

Arrrgh! Darn it...so close! I've taken the liberty of filling in some blanks and breaking the data out into the more colorful, comprehensive four-year graph below. I was even able to break out the unsubsidized enrollment numbers between on & off-exchange enrollees at the state level for 2016 & 2017. I was able to find some of the missing data for MA & VT in other CMS reports, such as this one from 2016. Unfortunately, I haven't been able to find off-exchange enrollment data for 2016 & 2017, or any hard monthly average data for MA/VT for 2014 & 2015, however.

The biggest unknown is the Grandfathered/Transitional section at the top. For 2014, I started with this post by the Kaiser Family Foundation (using Mark Farrah Associates data), which pegged the total individual market at around 15.6 million people as of December 2014. I then used ACA-era attrition trends to assume that the monthly average enrollment in 2014 was likely around 17.0 million (that is, the December enrollment total should be roughly 92% of the monthly average). That means roughly 8.6 million Grandfathered/Transitional enrollees on average in 2014. For 2017, I used Kaiser's rough estimate of around 2.1 million. For 2015 & 2016 I just eyeballed it, figuring GF/TR enrollments were likely around 6.0M in 2015 and 4.0M in 2016.

With all that said, here's what it looks like visually: 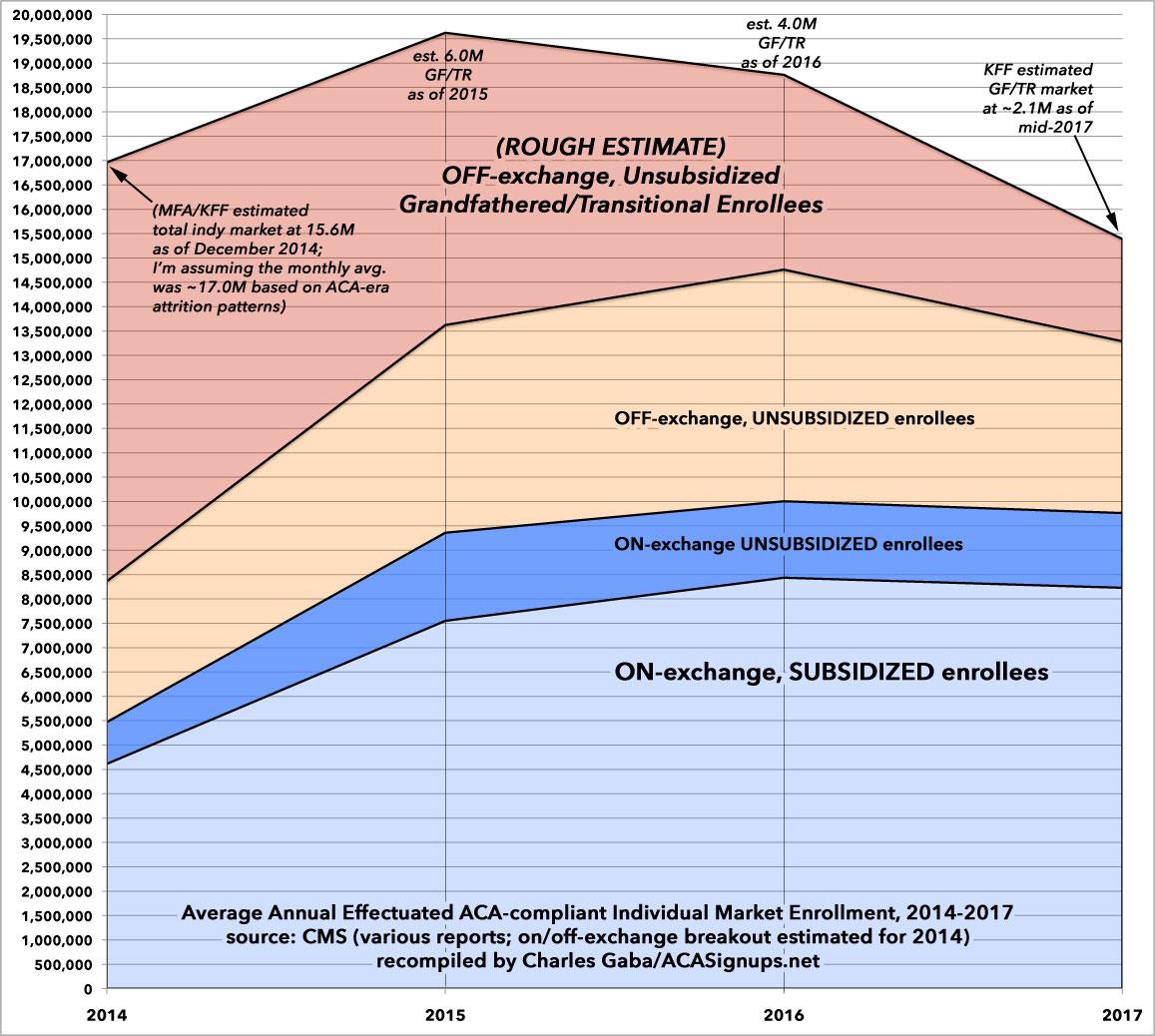 ...and here's the spreadsheet (WARNING: IT'S BIG...click the image itself for a high-res version. Remember, these numbers are all the average per month for the given year: 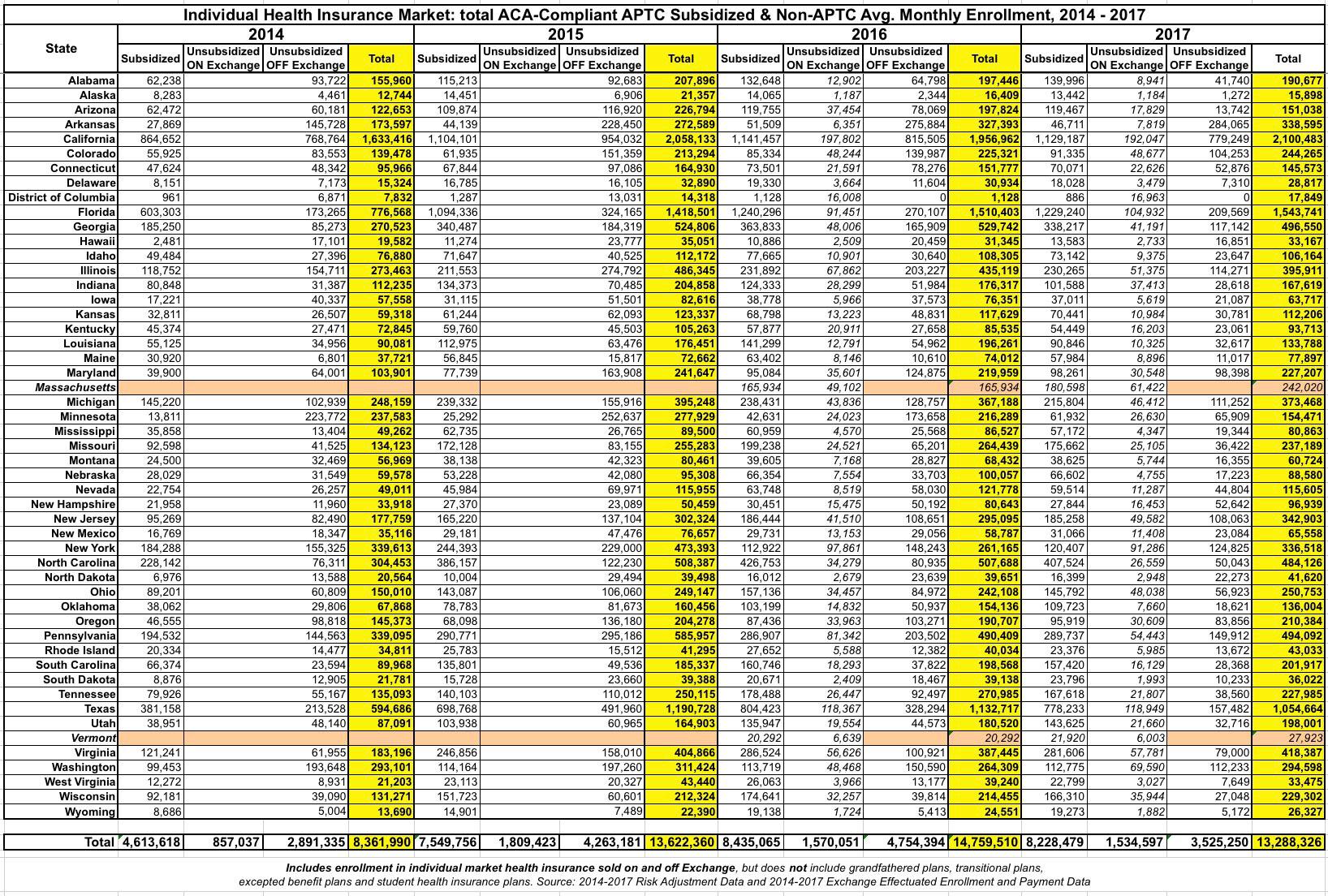