*(OK, these are technically only "semi-approved" rates...there could still be some additional tweaks later on after public comment, etc.)

Oregon was the fourth state which I ran a preliminary 2019 rate increase analysis on back in May. At the time, I concluded that insurance carriers were requesting a weighted average increase of 10.5% for ACA-compliant individual market policies next year. I knew that Oregon's state-based Reinsurance program was helping keep that average down to some degree, but I didn't know exactly how much of a factor it was.

I also knew that efforts to sabotage the ACA by Donald Trump and Congressional Republicans would play a major role in increasing 2019 rates: Repeal of the individual mandate is a big factor, along with the unnecessary 1-point increase in the state exchange fee being imposed on Oregon and the other four states which run their own exchange but "piggyback" on HealthCare.Gov's technology platform.

At the time, I estimated that these sabotage factors accounted for around a 9.1 percentage point increase, based on a combination of hard data from two of the carriers and a March analysis/projection by the Urban Institute for the other five. However, since that time, I've reevaluated my thinking and am using Urban's estimates more cautiously: I've started knocking 1/3 off their projections, so instead of a 9.1 point increase for mandate repeal, I'm only estimating around 6.1 points in Oregon, giving a 4.4% "no sabotage" average increase.

It's important to keep in mind that the preliminary rate filings in each state are requested rate changes only. The state insurance regulators still have to review the requests, crunch the numbers themselves and decide whether they're justified or not. In some states the regulators have no authority to actually change the rates; all they can do is waggle their finger and try to publicly shame the carriers into lowering their ask.

In other states such as Oregon, however, the state has the ability to overrule the carrier requests and knock down the rate hikes (in some cases they actually force the carrier to increase them even more than the carrier intended, in order to help keep the carrier liquidity healthy).

On Friday (thanks to David Pitfield for the heads up!), the Oregon Division of Financial Regulation issued their rulings for the 2019 individual and small group market rate filings...and sure enough, they did indeed chop down the rate increases by several points for most of the carriers:

Overall, average premium increases were lowered by 2.8 points to a 7.8% hike for 2019. This means that if not for the impact of the mandate being repealed and the exchange fee being increased, Oregon carriers would likely only be raising rates by around 1.7%.

The Oregon DFR press release also put a hard number on the Reinsurance Program impact: 6.3 percentage points. This means that without the reinsurance program, premiums would be going up 14.1% next year:

Reasons for the rate changes include:

In short, the state reinsurance program is effectively cancelling out this year's sabotage efforts...but it would be even lower still without those efforts.

UPDATE:  almost forgot: The Oregon DFR also posted the semi-approved small group rate changes as well, although they didn't change any of those requests, and the small group market isn't really where the ACA pricing problems have been. I don't track the small group market nearly as closely/consistently as the individual market, so I have no idea what the weighted average increase is, but it looks like somewhere around 5-6% or so, which has been pretty typical of the group market for years anyway. 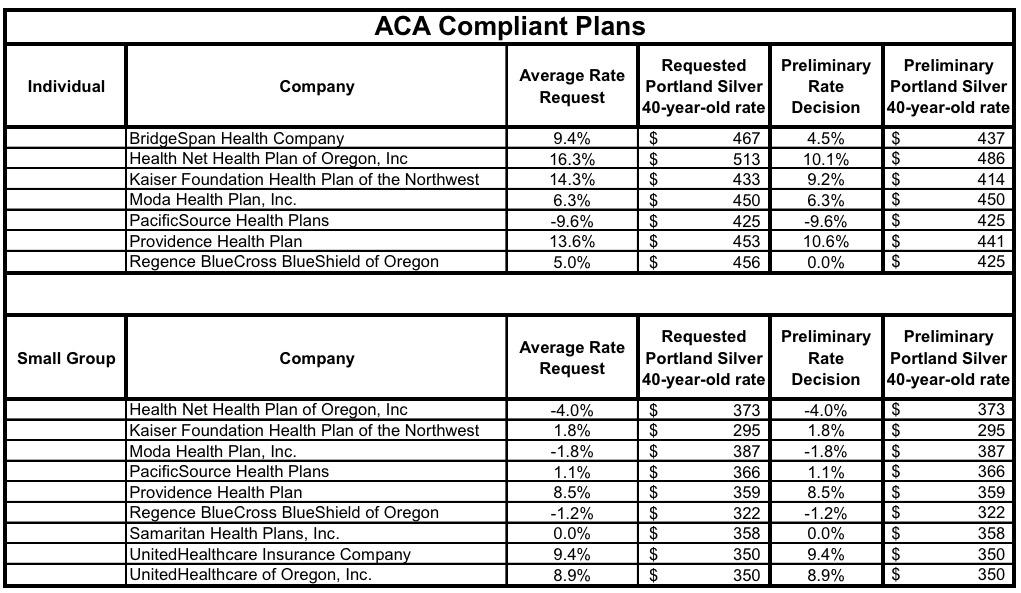