Kaiser confirms everything I've been saying: If not for Trump/GOP's #ACASabotage wrecking ball, premiums would be FLAT or DROPPING next year.

Note: This is a follow-up to a post I wrote back in early May which was itself based on an earlier analysis by the folks at the Kaiser Family Foundation.

For weeks now, I've been painstakingly analyzing and plugging in the preliminary 2019 rate change data for ACA-compliant individual market as each state submits their filings. As of today, I've compiled data for 18 states (+DC), comprising perhaps 40% of the total ACA individual market, give or take. The table below shows where things stand at the moment.

Those yellow and manilla cells at the bottom are not a typo: To the best of my estimates so far, the insurance carriers across these 19 markets are asking for average 2019 unsubsidized premium rate increases of around 10-11%...however, as far as I can tell, they would be keeping rates FLAT year over year (on average), for the first time since the ACA launched, if not for three sabotage efforts by Donald Trump and Congressional Republicans: Repeal of the ACA's individual mandate, and Trump's removal of restrictions on non-ACA compliant "Short-Term, Limited Duration" and "Association" plans, which I've shorthanded as simply #ShortAssPlans....and in fact would actually be dropping in quite a few states (or, in the case of Minnesota, dropping more than they already are set to with those factors): 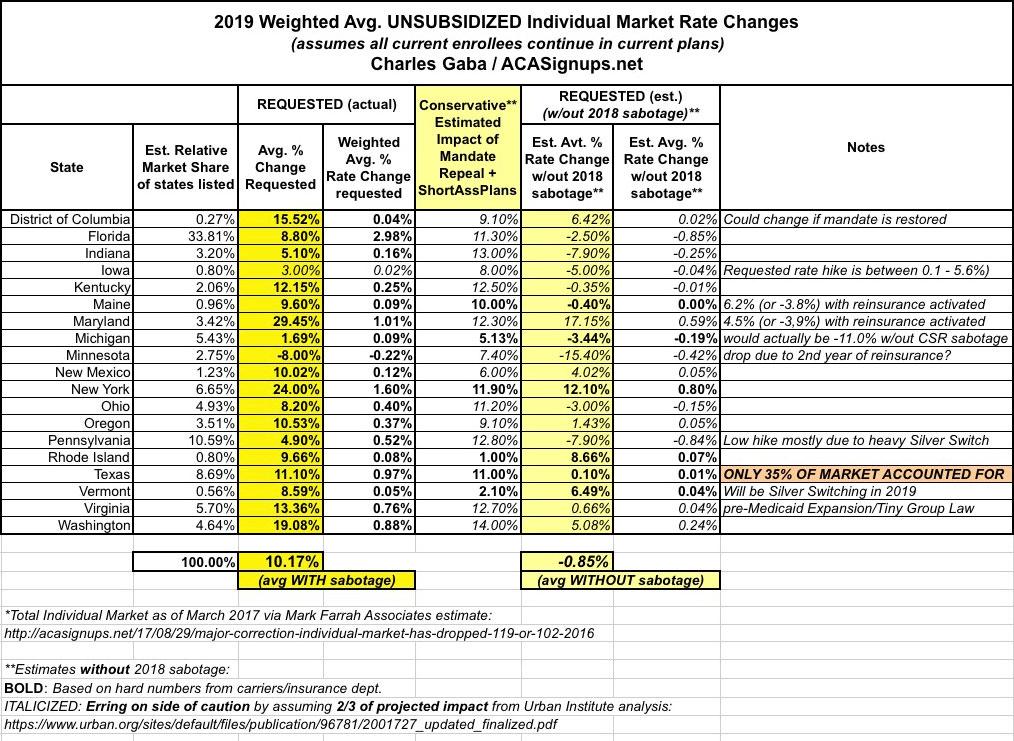 New analysis: Insurers did very well in Q1 of 2018 in the individual market under the ACA. If not for looming repeal of the mandate penalty and expansion of loosely-regulated plans, we'd be looking at modest premium increases and even decreases for 2019. 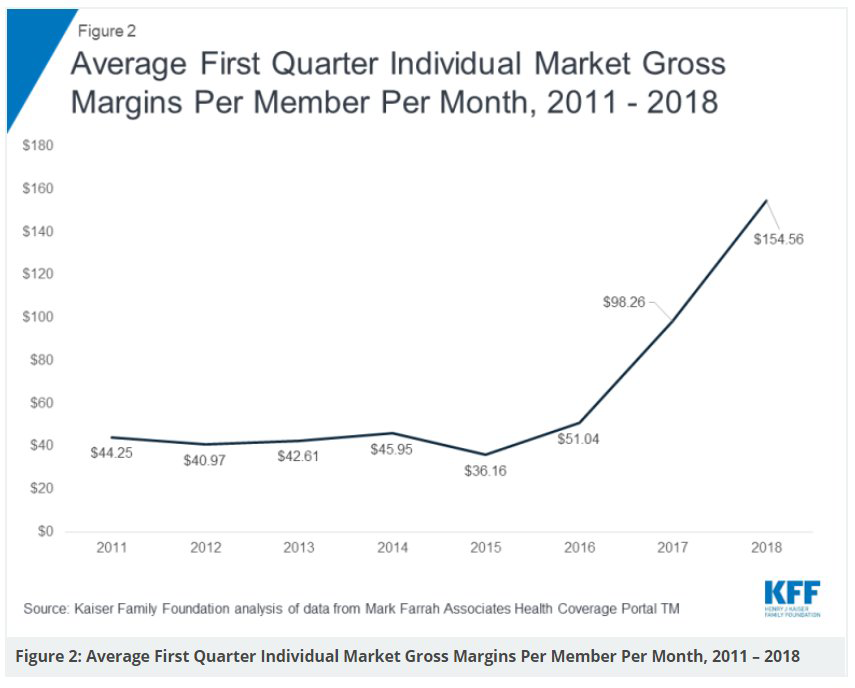 In the early years of the ACA, insurers set premiums too low to cover medical claims and administrative costs. Now premiums may be too high. This means a complicated story for 2019: Repeal of the mandate penalty will push premiums up, but excess profits could push them down.

Few people were playing violins for insurance companies when they were losing money in the individual market in the early years of the ACA. But the law only works if insurers participate, and insurers will only participate if they make money.

It would be one heck of a thought experiment to imagine how the debate over the ACA would be going right now if the 2016 election had turned out differently.

Below is an admittedly crude graph showing how average monthly premiums and claims have increased on the individual market over the years since the ACA went into effect. The data for 2011-2017 comes from this earlier, full-year analysis by Kaiser (based on data from Mark Farrah Associates), while the data for 2018 and 2019 is a combination of hard data from CMS, the actual rate filing data I've analysed above and projections based on estimates by the Urban Institute and the carriers themselves.

This will obviously change as more hard data is plugged in, but as far as I can tell, if it weren't for both 2017 and 2018 sabotage efforts by Trump and the GOP, 2019 rates would be averaging around $493/month per person. If it weren't for 2018 sabotage only, 2019 rates would likely be around $568/month. Instead, with both years worth of sabotage factored in, unsubsidized premiums will likely come in at around $630/month next year...fully $137/month more than they would if not for the 2-year onslaught. That's over $1,600 more per enrollee for the full year. If you only compare against 2018 sabotage, it'd be around $62/month more, or around $740/year...which is right in the midrange of the table below: 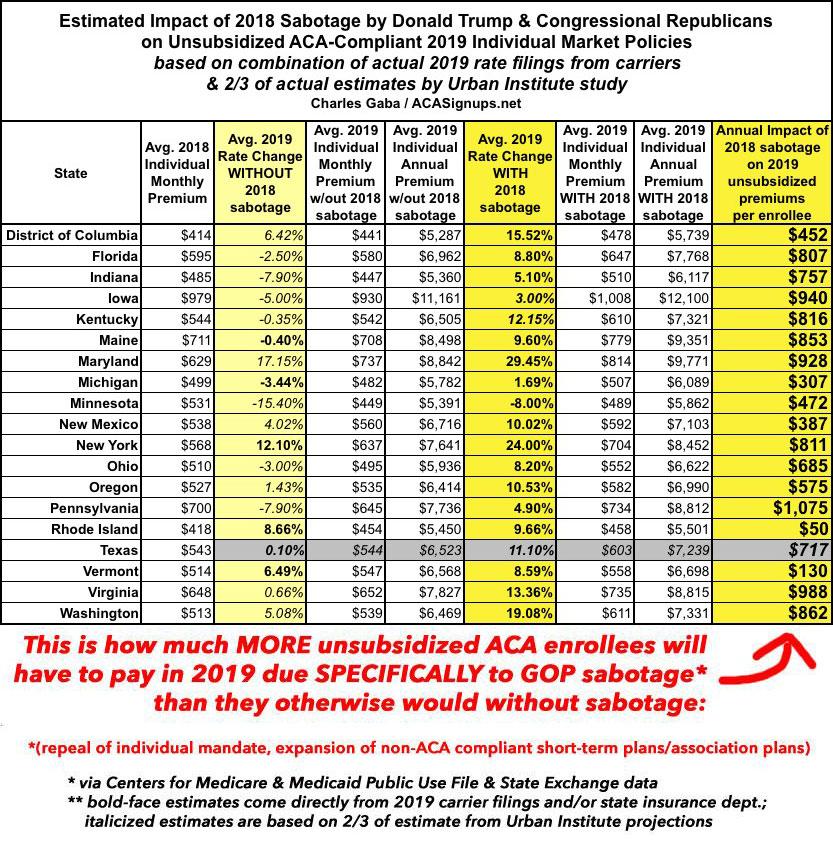 UPDATE: And right on top of Kaiser's new analysis comes this release from Mark Farrah Associates, which tells pretty much the same story:

2015 marked the low point for profitability in the commercial segments. Since 2015, all three lines have reported improvements in profitability, with the most dramatic improvement found in the Individual segment. The Large Group segment’s underwriting gain grew from 1.6 billion to almost 3 billion, or 80%, between 2016 and 2017 while only increasing enrollment by 2%. Not to be outdone, the Small Group segment’s profitability more than doubled since 2016 and is now higher than the pre-ACA mark of $2.148 billion, even with the 30% decline in enrollment. Finally, the Individual segment experienced the most dramatic turn around, posting an aggregate underwriting gain of $1.7 billion, the first reported gain since segment reporting began in 2010.

There's a bunch more info at the Farrah link which I'll write up separately tomorrow.