Earlier this year, I crunched a mountain of numbers to try and put together an estimate of just how many people are at risk of losing healthcare coverage completely if & when the Affordable Care Act is "cleanly" repealed--that is, a full and complete repeal of the entire law, without any other significant healthcare law replacing it whatsoever. My rough estimate? Around 24 million people, broken out by Congressional District.

Sometime after that, the Congressional Budget Office ran the numbers to see just how many people they expected would lose healthcare coverage if the GOP's American Health Care Act (Trumpcare) "Obamacare replacement plan" were to be signed and put into effect. Their conclusion? ALSO around 24 million people.

Based on the CBO's projections, the Center for American Progress (CAP) decided to try and break out the CBO's 24 million (not to be confused with the 24 million I projected) by Congressional District as well. Both my District Breakout and the CAP version went viral, being utilized widely by groups like Indivisible and other interested parties to inform people about just how many of their fellow constituents were at risk.

You know the rest...the GOP tried to slap together various last-minute amendments to hold the AHCA vote together, but at literally the last minute Paul Ryan yanked the whole thing. For a few weeks.

Now, of course, they're tying to push this pile of junk through again...and this time, in order to get the "House Freedom Caucus" (aka the completely insane wing of the party) on board, they're attempting to make it even worse...by effectively killing off the provisions of the ACA which require actual healthcare polices to cover actual healthcare, including pre-existing conditions.

In response, the Center for American Progress has once again run the numbers in every Congressional District nationally, this time to compile data on just how many people actually have pre-existing conditions in each district which could potentially be denied treament if the new version of Trumpcare were to become law (and every state were to kill off Essential Health Benefits and/or Community Rating for those with Pre-Existing Conditions, which would amount to the same thing as denying PEC's coverage at all):

Republicans are now discussing a provision that is effectively a sick tax on premiums: People with health conditions would be charged multiples more based on their medical history, paying above-standard rates for coverage. Even if the new plan preserved the ACA’s rules on guaranteed issue—meaning that issuers cannot deny coverage—consumers with pre-existing conditions could still be priced out of the market.

Prior to the ACA, insurers could discriminate against consumers based on their current health conditions and medical history. Consumers with common ailments, including asthma and high blood pressure, were charged higher rates. People with histories of serious conditions, such as cancer or heart attacks, were regularly denied coverage altogether.

While people with Medicaid or employer-based plans would remain covered regardless of medical history, the repeal of pre-ex protections means that the millions with pre-existing conditions would face higher rates if they ever needed individual market coverage. The return of pre-ex discrimination would hurt older Americans the most. As noted earlier, while about 51 percent of the nonelderly population had at least one pre-existing condition in 2014, according to the HHS brief, the rate was 75 percent of those ages 45 to 54 and 84 percent among those ages 55 to 64. But even millions of younger people, including 1 in 4 children, would be affected by eliminating this protection.

There's some confusion about this last point, but it's an important one. Roughly 47% of the population is covered by employer-sponsored policies which, for the most part, do cover pre-existing conditions, do have community rating and do have fairly comphrensive coverage. The problem is that if any of those folks loses (or voluntarily leaves) their job and ends up seeking coverage on the individual market, they'd be just as screwed (assuming they have a pre-existing condition and the GOP plan is enacted) as the roughly 18 million people already on the indy market today.

The CAP spreadsheet is extremely handy, and they deserve full credit for crunching the numbers. Unfortunately, it's only available as a single massive spreadsheet, so I've takent the liberty of grouping all 435 CDs together by state into shareable JPG images. I'm also color-coding each CD by party control and, while I'm at it, I'm also plugging in my own estimate of how many people currently on the individual market likely have some sort of pre-existing condition which would likely result in them being charged dramatically higher rates to the point that they likely couldn't afford coverage whatsoever if the Trumpcare 2.0 bill were passed. These estimates are obviously much lower than the total nonelderly population, and are based on:

For instance, CAP estimates that in Alabama's 1st District, around 280,500 non-elderly residents have pre-existing conditions. There's around 590,000 non-elderly people living in AL-01, so that's roughly 47.5% of the total.

As of the end of January, 31,459 people selected exchange QHPs in AL-01. Of those, around 27,369 should actually be enrolled in effectuated plans as of today (87%). There should be an additional 18,000 off-exchange individual market enrollees, for a total independent market of around 45,500 people. 47.5% of that is roughly 21,600 people currently on the indy market who likely have pre-existing conditions. 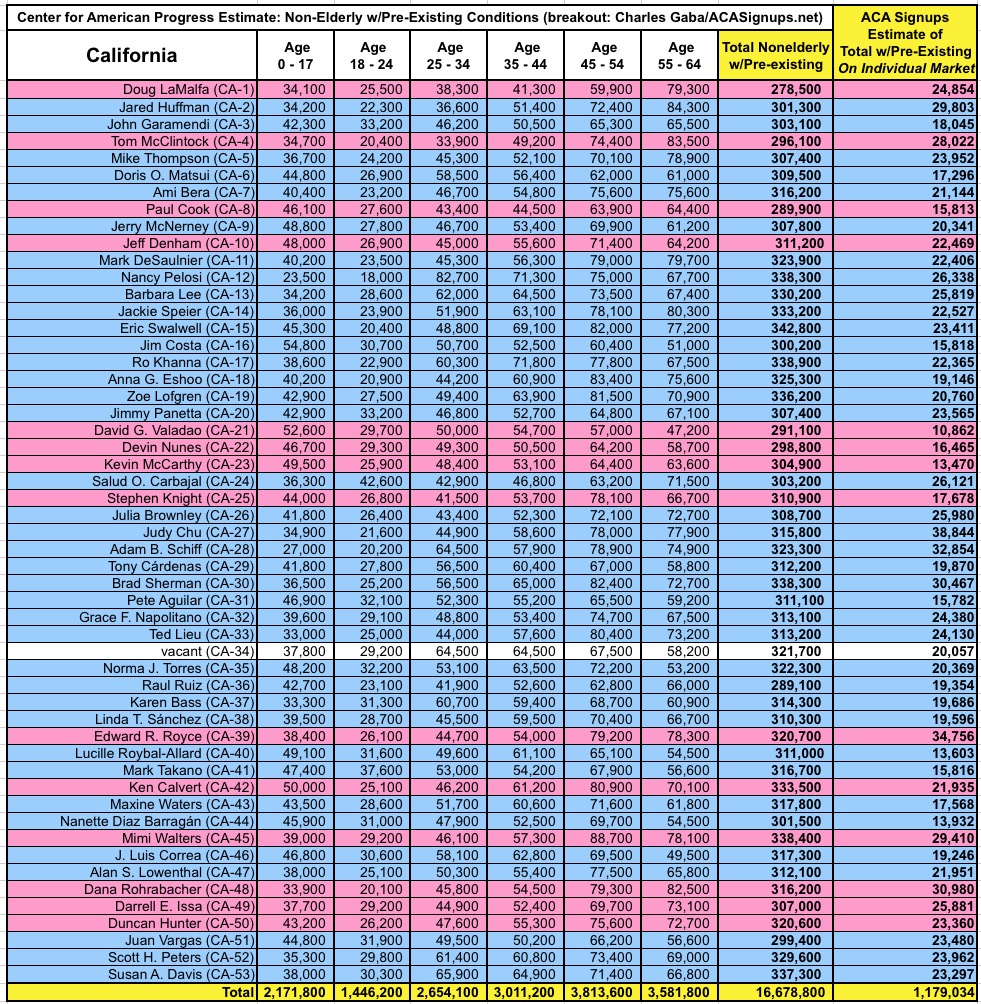 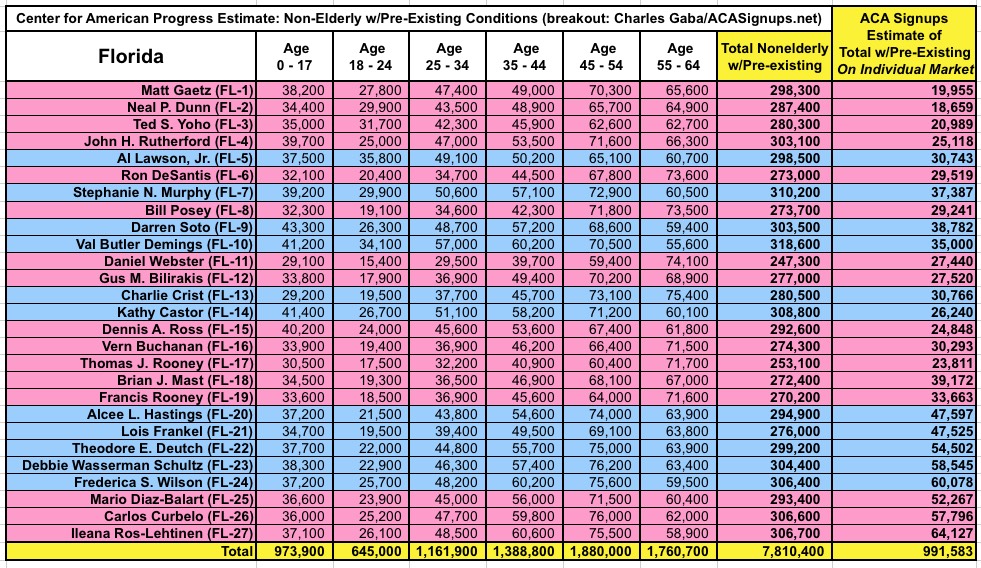 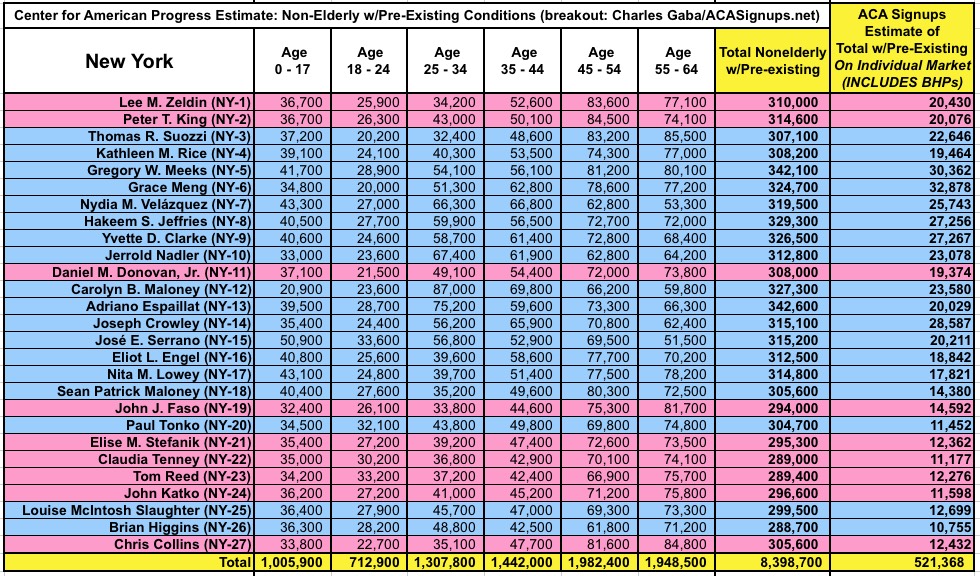 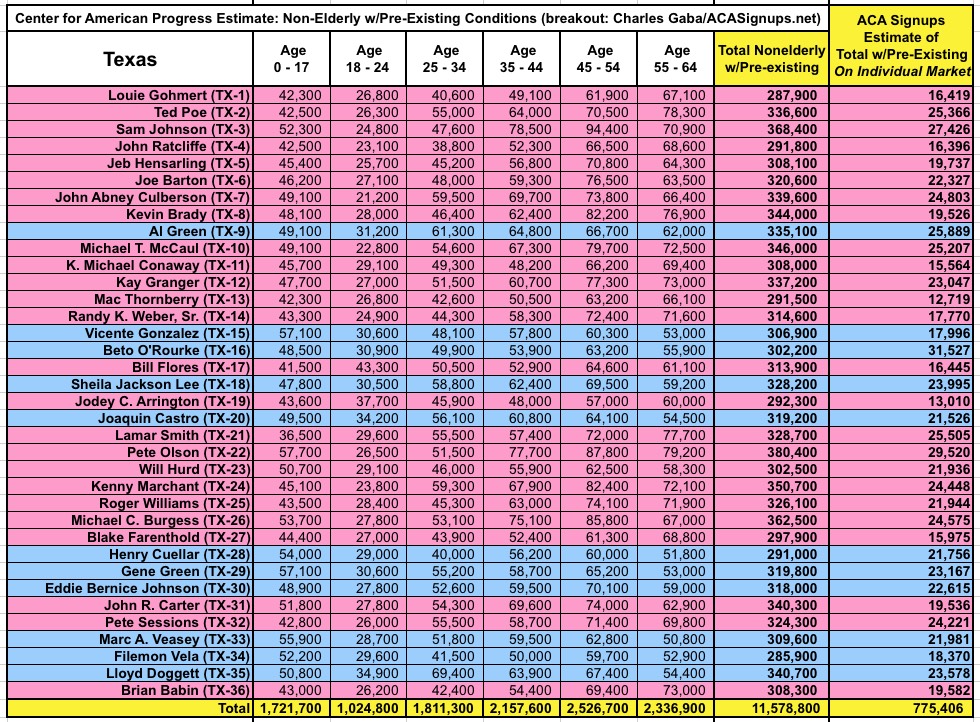