“Texans have known all along that Obamacare is unlawful, and a divided Supreme Court’s approval rested solely on the flimsy support of Congress’ authority to tax. Congress has now kicked that flimsy support from beneath the law,” Paxton said in a statement Monday. “With no remaining legitimate basis for the law, it is time that Americans are finally free from the stranglehold of Obamacare, once and for all.”

Here's the simplest possible summary of the argument that Paxton et al are trying to make:

That's pretty much it in a nutshell. Seriously.

Here's the actual lawsuit text...and the chutzpah of the premise is breathtaking:

The Patient Protection and Affordable Care Act (the “Affordable Care Act,” “the ACA” or “the Act”), as recently amended, forces an unconstitutional and irrational regime onto the States and their citizens. Because this recent amendment renders legally impossible the Supreme Court’s prior savings construction of the Affordable Care Act’s core provision—the individual mandate—the Court should hold that the ACA is unlawful and enjoin its operation.

...On December 22, 2017, the President signed into law the Tax Cuts and Jobs Act of 2017. This new legislation eliminated the tax penalty of the ACA, without eliminating the mandate itself. What remains, then, is the individual mandate, without any accompanying exercise of Congress’s taxing power, which the Supreme Court already held that Congress has no authority to enact. Not only is the individual mandate now unlawful, but this core provision is not severable from the rest of the ACA—as four Justices of the Supreme Court already concluded. In fact, Congress stated in the legislative text that the ACA does not function without the individual mandate.

Yep, their entire argument is literally "because we sabotaged one part of Obamacare, it means that there's no choice but to tear down the rest of it as well, gosh darn it!"

In fact, they actually use the fact that the mandate itself is still technically on the books as the basis for this argument, which seems nuts to anyone who isn't a Constitutional lawyer, but could very well make "sense" due to the cryptic way in which such things are interpreted by judges.

Of course, once again, Congress does still have "taxing power"...they simply chose (well, the Republicans did, anyway) to weaken their implementation of it.

I bring all this up because of the pending litigation from a consortium of states seeking, yet again, to invalidate the Affordable Care Act. The two individual plaintiffs that they’ve enlisted to support their standing have submitted affidavits saying that they’re healthy, self-employed, and earn more than 400% of the poverty line.

Accepting those claims as true, the two plaintiffs have sustained a pocketbook injury on account of the ACA. That’s because the ACA requires insurance sold on the individual market to be made available to the poor and the sick alike on equal terms. If a court declared the ACA unconstitutional, these two plaintiffs could probably buy comparable, risk-rated insurance for much less.

But their specific legal argument isn’t about the ACA as a whole. Rather, the plaintiffs believe that the individual mandate is unconstitutional because (a) the Supreme Court only upheld the mandate as an exercise of Congress’s taxing power, (b) the tax penalty has now been repealed, and (c) the penalty-free “mandate” that’s now on the books is unconstitutional. Then—and here’s the kicker—the plaintiffs argue that the individual mandate can’t be severed from the rest of the ACA, meaning that the entire statute has to be wiped from the books.

That’s analogous to saying that the invalidity of the $3 checkbox should render the entire Internal Revenue Code unconstitutional. It’s a laughable argument, but that’s the claim. (The plaintiffs insist that this penalty-free mandate causes them injury because “I value compliance with my legal obligations, and believe that following the law is the right thing to do.” That’s garbage: the Supreme Court has already held that they have no legal obligation to buy insurance. The plaintiffs’ injury arises from ACA writ large, not from the mandate.)

So what’s a court to do? A court could assume the validity of the plaintiffs’ argument about the invalidity of the entire ACA, as silly as that argument is, and say that they have standing. But the court would then risk issuing an advisory opinion about the constitutionality of the individual mandate. Alternatively, a court could deny plaintiffs’ standing by rejecting their remedial argument, at the risk of issuing an advisory opinion about severability. Either way, the court would be violating Article III. Right?

I’ve got a couple of thoughts about how to square this particular circle in the coming days. But I think it’s a genuine puzzle, and not one with a tidy answer.

OK, so it's an absolutely insanely terrible legal case...but it still has to be defended against.

And guess who gets to defend against the lawsuit? The U.S. Department of Justice.

Guys, I have a very bad feeling about this. These are the civil servant line attorneys withdrawing from the Texas lawsuit minutes before the USG's brief is due to be filed. 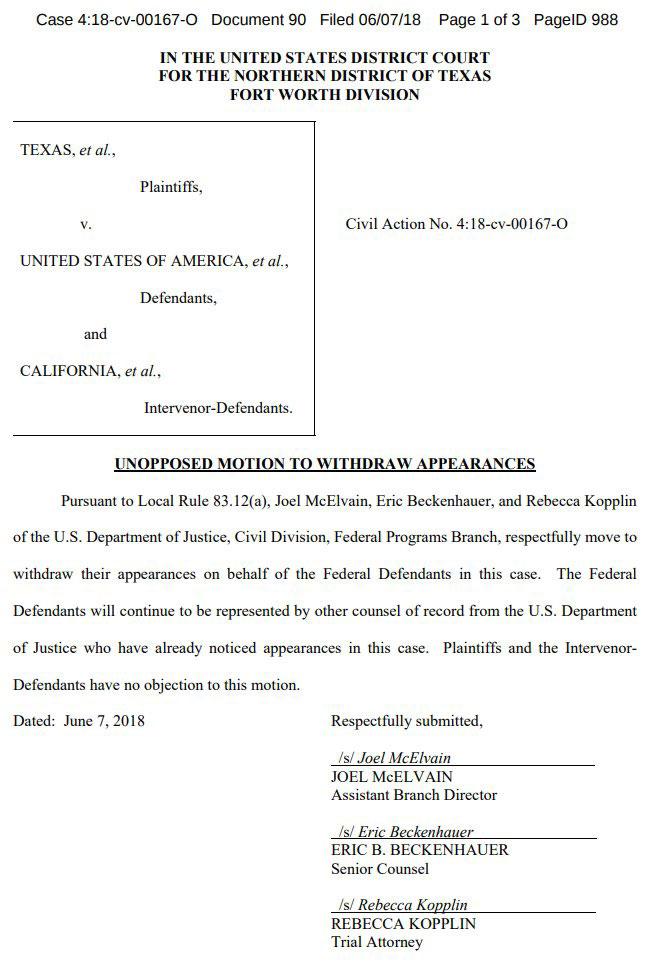 In short: This makes it look very much like Trump's DoJ is basically throwing the fight.

I stand by this. We'll see what the Justice Department says when it files its brief. https://t.co/Am5V5f8OHt pic.twitter.com/g8sMHIqzih

Forget the canary--this is more like the shrieking hyena in the coal mine. Respected career lawyers. Trump DOJ perhaps about to argue that ACA is 100% invalid.https://t.co/ZSXKx6wuH4@nicholas_bagley @ShallTakeCare

UPDATE: NARRATOR: It wasn't nothing.

(instead of embedding the actual tweets, which takes a long time, I'm just gonna copy and paste the text from Nicholas Bagley's thread):

Larry Levitt of the Kaiser Family Foundation has a slightly less horrific take regarding the 2019 Open Enrollment Period, anyway:

The Justice Department's brief creates another cloud of uncertainty for insurers, just as they're filing proposed ACA rates for 2019. When insurance companies face uncertainty, they increase premiums.

This ACA legal case will likely not be decided soon, so I wouldn't expect insurers to drop out of the market. Ultimately, either the ACA will remain intact. Or, it will get blown up by the courts, at which point insurers and regulators will have to start from scratch.

27% of non-elderly adults have pre-existing conditions. Arguing in court that protections for them should be eliminated, as the Trump administration is now doing, could provoke a backlash in an election year.https://t.co/3rUghb9FF5

Repealing the ACA's individual mandate penalty poses trade-offs, but no doubt was a popular move. Ending protections for people with pre-existing conditions, as the Trump administration is now arguing, would be quite the opposite.