Kaiser Explains it All re. #ShortAssPlans (and indirectly confirms some of my data while they're at it)

Over at the Kaiser Family Foundation, Karen Pollitz and Gary Claxton have published a handy explainer which goes over the basics of the various types of NON-ACA individual market policies...specifically, the "Short Term" and "Association" plans which Donald Trump is attempting to flood the market with by essentially removing any restrictions or regulations on them, but also the "Idaho Style" plans which were rejected by HHS for being flat-out illegal as well as the "Farm Bureau" junk plans which Iowa recently decided to open the floodgates on (Tennessee already had a similar setup, and sure enough, it has proven pretty devastating to Tennessee's ACA market since 2014 as a result). The whole thing is worth a read, but in the early part of their explainer, however, they also happened to neatly lend support to my estimates from last week regarding the unsubsidized market:

...Individual market premiums were relatively stable during the first three years of ACA implementation, then rose substantially in each of 2017 and 2018. Last year, nearly 9 million subsidy-eligible consumers who purchased coverage through the Marketplace were shielded from these increases; but another nearly 7 million enrollees in ACA compliant plans, who do not receive subsidies, were not. Bipartisan Congressional efforts to stabilize individual market premiums – via reinsurance and other measures – were debated in the fall of 2017 and the spring of 2018, but not adopted. Meanwhile, opponents of the ACA at the federal and state level have proposed making alternative plan options available that would be cheaper, in terms of monthly premiums, for at least some people because plans would not be required to meet some or all standards for ACA-compliant plans. This brief explains state and federal proposals to create a market for more loosely-regulated health insurance plans outside of the ACA regulatory structure.

...For consumers who are eligible for APTC and who buy the benchmark silver plan (or a less expensive plan) through the Marketplace, subsidies absorb annual premium increases and the net cost of coverage has remained relatively unchanged from 2014 through today. Roughly 85% of Marketplace participants in 2017 were eligible for APTC. (Figure 2) However, for the 15% of Marketplace participants who were not eligible for subsidies, and for another roughly 5 million individuals who bought ACA compliant plans outside of the Marketplace, these consecutive annual rate increases threatened to make coverage unaffordable. That threat was even greater in some areas, where 2018 QHP rate increases were much higher than the national average. 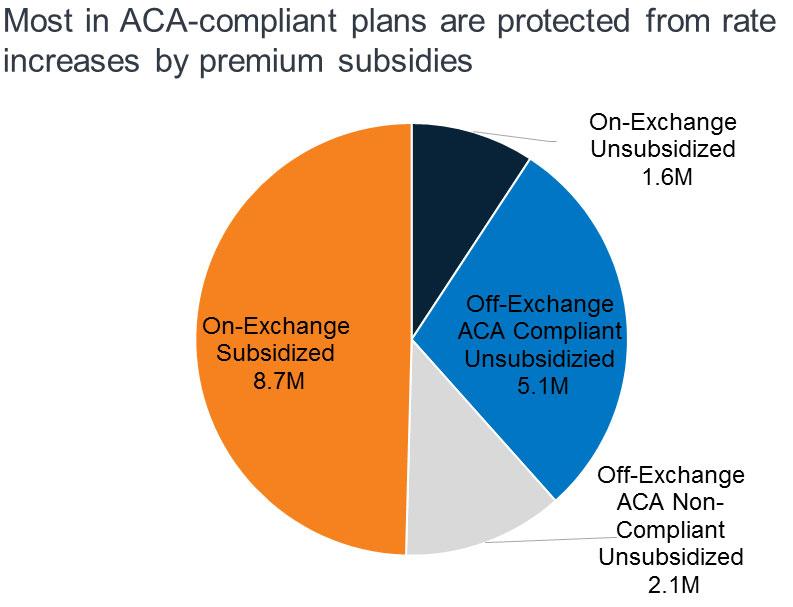 Looking ahead, another round of significant premium increases is possible for the 2019 coverage year. A new source of uncertainty arose when Congress voted to end the ACA’s individual mandate penalty, effective in 2019. The Congressional Budget Office (CBO) estimated repeal of the mandate would fuel adverse selection – as some younger, healthier consumers might be more likely to forego coverage – and average premiums in the non-group market would increase by about 10 percent in most years of the decade, on top of increases due to other factors such as health care cost growth.

ACA opponents have argued QHP premium increases reflect a failure of the federal law. As an alternative, some have proposed different kinds of health plan options to offer premium relief to consumers who need non-group coverage but who are not eligible for premium subsidies, primarily by relaxing rules governing required benefits, coverage of pre-existing conditions, and/or community rating.

However, as I've noted many times before, about 13% of the starting exchange enrollment total either don't pay their first premium at all (around 10%) or drop coverage after the first month or two (about 3%), which in this case translates as around 8.5 million subsidized and 1.7 million exchange-based unsubsidized. Assuming the attrition rate for the off-exchange category is similar, that should mean roughly 3.9 million off-exchange ACA-compliant enrollees as of today. The non-ACA compliant market, however, likely has a lower net attrition rate, so I'm guessing it's still around 1.6 million as of today. Add it up and you get around 15.7 million people...roughly 10% smaller than a year ago, or down 1.8 million enrollees total.

Given everything that happened last year, this is hardly surprising.