FUN WITH MATH: 6.5M people likely just had their tax cut wiped out by ACA sabotage

NOTE: I'm well aware that the math below is of the "back of the envelope" variety and has a lot of caveats and assumptions.

Today is Tax Day, so I decided to do a fun little exercise (OK, it's not fun for those getting stuck with the bill).

Last week I crunched the numbers and determined that roughly 6.5 million middle-class Americans enrolled in individual market policies are being hit with an average health insurance premium hike of around $960 apiece this year specifically caused by the various sabotage efforts put forth by Donald Trump and Congressional Republicans last year. This primarily consisted of the CSR remimbursement payment cut-off, but also included smaller factors like threats (later made reality) to not enforce and/or repeal the individual mandate; slashing marketing/outreach budgets by 90% and 40% respectively; and so forth.

Again, to reiterate: That $80/month ($960/year) premium hike has nothing to do with other factors which caused rates to increase this year, such as normal medical inflation and the like; this is the portion which is 100% on political sabotage policy factors only. The national average ranges from as low as almost nothing in Vermont and North Dakota to as high as $1,500 per person in Pennsylvania and Mississippi.

Now, we know the lower bound income level of these folks (around 400% FPL) but not the upper bound, because there isn't one. However, I'm willing to bet that the vast majority of these folks earn between 400% - around 700% FPL ($85K for a single adult, $175K for a family of four).

Here's a chart showing how federal income level tax brackets changed under the new GOP/Trump tax law. As you can see, just about all of them should fall smack in the middle of the third bracket, where their tax rate drops from 25% to 22%: 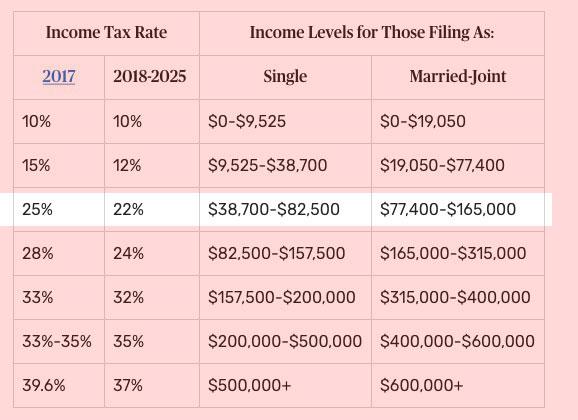 To further simplify things, the average U.S. household has around 2.58 people. Assuming these 6.5 million are representative, that suggests around 2.52 million households.

In other words, these 6.5 million people just saw their entire tax cut more than wiped out by the sabotage stunts pulled by Trump and the GOP last year.

Obviously there are other factors to consider as well--the standard deduction doubled, for instance--but it also eliminated personal exemptions and so forth.

I have no idea what the actual net gain or loss on any specific person or family will be; some may still come out ahead, while others will take a higher loss. The larger point is that all of these things are connected to each other. Cutting taxes over HERE doesn't do much good if you're RAISING COSTS over THERE.