It's important to note the "and paid for" caveat here for both years, and it's really interesting:

In other words, while they outperformed 2017 by over 12% in initial enrollments, they're only 5% ahead of 2017 in actual paid/effectuated enrollees. It remains to be seen whether this is reflected nationally; keep in mind that Rhode Island is one of the smallest states (and therefore, has one of the smallest exchange populations).

“Young invincibles are good for the overall stability of the market as they are typically healthier and therefore utilize less medical services,” said HealthSource RI Director Zachary W. Sherman. “I am encouraged we saw a big jump in overall new customers this year and that so many younger Rhode Islanders decided to enroll in high-quality, affordable HealthSource RI coverage for the first time.”

That's huge. Keep in mind that most actuaries felt that the ACA exchanges would need around 40% of the enrollees to be in the 18-34 range for the market to be truly stable, so Rhode Island is still a bit below that, but it's still an impressive improvement. Nationally, the ACA exchanges have averaged around 28% Young Invincibles year over year, although that doesn't include the off-exchange market, where the age brackets may be different.

Rhode Islanders younger than 45 years old make up about half of 2018 customers, as shown in Figure 2. Enrollment by gender remains fairly consistent in 2018. As of January 31, the gender breakdown was 54 percent (16,513 individuals) female and 46 percent (14,124 individuals) male. 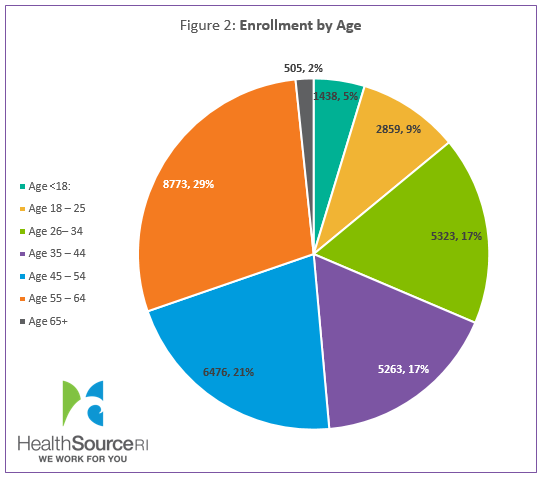 There was a notable shift in plan enrollment towards Neighborhood Health Plan of Rhode Island (NHPRI), with market share rising from about 50 percent in 2017 to 70 percent (21,525 individuals) this year. This trend was most pronounced in new customers, who chose NHPRI over 80 percent of the time. The other 30 percent (9,112 individuals) of 2018 HealthSource RI customers enrolled in health coverage from Blue Cross & Blue Shield of Rhode Island (BCBSRI). The shift was primarily driven by NHPRI’s lower prices.

...and then get into one of the most important factors for 2018: The impact of CSR Silver Loading/Silver Switching on enrollment. Rhode Island was one of about 20 states which went the full "Silver Switcharoo" route, so let's see how much of an impact that made:

In response to the federal administration’s decision to end Cost Sharing Reduction (CSR) payments to insurers, BCBSRI and NHPRI were asked to focus their premium rate increases on Silver-level plans sold on HealthSource RI’s individual market. Because the cost of these plans determines the dollar amount of federal tax credits relative to consumers’ income, the premium rate increases on these plans were absorbed by the tax credit for most customers. Due to HealthSource RI and the Office of the Health Insurance Commissioner’s protective state-based actions, considerably more federal financial assistance will be provided to Rhode Island marketplace customers. In January 2018, $7.5 million in financial assistance was provided to HealthSource RI customers to make their premiums more affordable, compared to $5.1 million in January 2017, a 46 percent increase.

“The Affordable Care Act is working in Rhode Island. Nearly every person in the state now has health insurance, and the premiums on HealthSource RI are among the lowest in the country,” said Governor Gina M. Raimondo. “Washington’s recent actions will undermine our great progress, putting us at risk of unnecessary price increases, instability and fewer plan choices. It is our responsibility to look for ways for the state to protect against federal threats to coverage and affordability.”

Despite increases in Silver plan premiums, HealthSource RI has the lowest benchmark plan nationwide in 2018. The benchmark plan is the second-lowest cost Silver plan available, and determines the amount of financial assistance customers receive. However, the phenomena of many Silver plans costing more than Gold led to a shift in 2018 enrollment by metal levels (Figure 3). HealthSource RI saw a significant reduction in unsubsidized Silver customers, as well as a drop in Silver customers who only receive tax credits. Ninety-two percent of unsubsidized 2017 Silver-level customers, who actively selected a 2018 plan, chose a different metal level this year. Most CSR eligible customers stayed in Silver plans since their tax credit absorbed most of the premium increase. Most significantly, 22 percent of HealthSource RI customers selected a Gold plan for 2018, up from 12 percent in 2017. 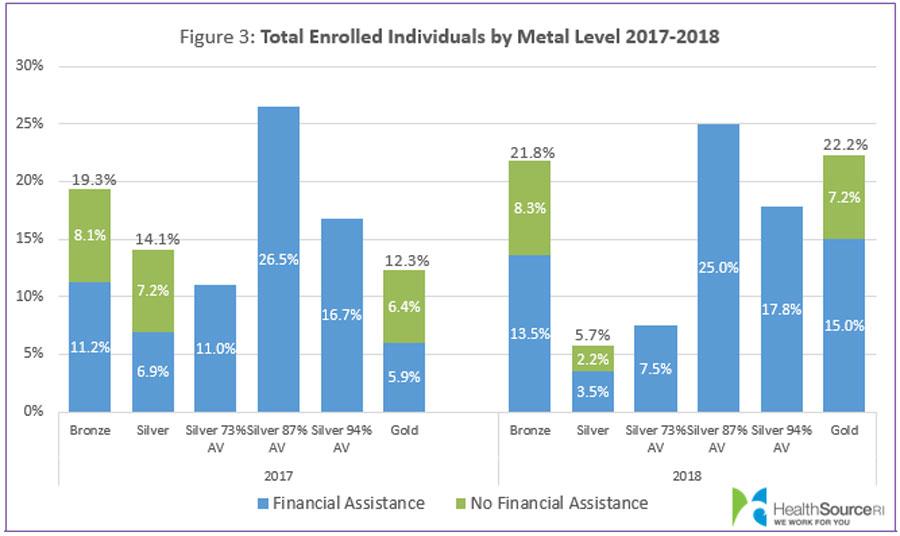 The bar graph above is very important in terms of understanding how much Silver Loading impacted the enrollment trends. Assuming no other significant contributing factors, Silver Loading resulted in...

Why is this important? Because funding CSRs *at this point* would end up HURTING more Rhode Islanders than it would help.

According to Mark Farrah Associates, in March 2017, Rhode Island's off-exchange individual market totalled around 13,800 people...but that includes some number of "grandfathered" enrollees (Rhode Island didn't allow "transitional" plans). Assuming perhaps 1,800 of these folks are in grandfathered plans, that's around 11,000 in off-exchange ACA-compliant policies. However, in Silver Switch states, the vast majority of off-exchange enrollees shouldn't be impacted by CSR funding in Rhode Island either: 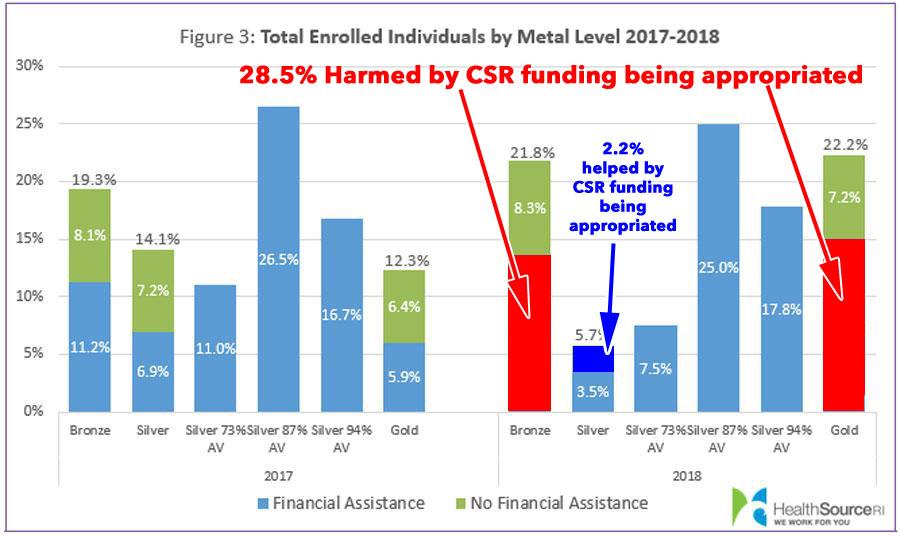 The exchange also underscores another important point which is often lost in the shuffle:

“In a year of uncertainty, state-based marketplaces like HealthSource RI saw higher enrollment and retention than HealthCare.Gov states due to our ability to nimbly adapt and serve our local communities,” Sherman added. “By enabling and educating our customers, many made the informed decision to leverage their increased purchasing power which led to higher enrollment in richer benefit plans at no additional cost.”

Though Open Enrollment for 2018 health coverage has ended, HealthSource RI may be able to offer a Special Enrollment Period to individuals and families who go through life changes that affect their ability to get healthcare coverage. Those who experience a qualifying life event, like moving to Rhode Island or losing employer sponsored coverage, should contact HealthSource RI at 1-855-840-4774 or in-person at 401 Wampanoag Trail in East Providence. Full list of qualifying events and hours of operation.