With CHIP funding finally locked in for the next decade, it shouldn't be in any danger (at least for the time being). Even so, it's important to keep in mind that about half of all Medicaid/CHIP enrollees are children.

The actual Zip-compressed Excel file includes all sorts of wonky demographic breakout info along with a bunch of caveats for individual states (for instance, Connecticut and Maine are missing Q3 2013 data so can't be included in the net enrollment increase numbers), but here's a simplified version of the the big picture. States which have expanded Medicaid as of today are in blue (not including Maine, since that hasn't gone into effect yet), while states which haven't are shown in red.

Overall, 74.4 million people are enrolled in either Medicaid or CHIP, a net increase of 16.6 million from before ACA expansion kicked into effect in 2014, or a 29.2% increase. That's about 23% of the entire U.S. population.

It's also important to note that while the monthly reports do always compare current Medicaid/CHIP enrollment against the third quarter of 2013 (just before ACA expansion officially went into effect), there were another 950,000 or so people who had already been enrolled in Medicaid via the ACA's early expansion option across 6 states and the District of Columbia. There's always a reference to this in the monthly reports, but it was broken out clearly on Page 5 of the March 2014 CMS Medicaid Enrollment report (thanks to Emma Sandoe for the link!):

I've never been quite certain how to report these ~950,000 people, and neither has CMS, to be honest; they're always sort of thrown in as an aside. The problem is that due to the high churn rate in the Medicaid program, there's a good possibility that many of these people would be double-counted if they were to be tacked on to the later total...someone in, say, California might have enrolled via the Early Expansion program in 2010, then moved off Medicaid in 2012-2013, and then re-enrolled again in 2014. As a result, it's a bit tricky to count them, so I've listed them off to the side.

In addtion, while the CMS report doesn't include the Q3 2013 enrollment numbers for Connecticut or Maine, I've been able to dig up those numbers here:

Add these folks into the mix and the net increase over pre-ACA levels is more like 17.5 million, give or take. Unfortunately and to my frustration, these monthly reports never break out how many of these people are enrolled specifically thanks to ACA expansion. However, it does note that enrollment in expansion states is up by 14.1 million people (up 38.1% from 37.0 million in Q3 2013), while enrollment in non-expansion states is only up by 2.5 million (up 12.5% from 19.7 million in 2013).

Tack on the ~950K from before 2014 and that a net gain of right around 15 million even in expansion states.

At first glance, this makes it sound like slightly fewer than 15 million people are enrolled specifically via the ACA expansion program. However, data I compiled last year suggested that ACA expansion-specific enrollment crossed the 16 million mark sometime last summer. What accounts for the 1 million difference? Well, my guess is that some of this is a net loss of enrollment by people in "traditional" Medicaid--remember that Medicaid/CHIP have a pretty high churn rate, with people moving on and off the program from month to month. If that 16M figure is accurate for today's report, that means a good 91% of the net increase is ACA-related.

Of course it's also conceivable that my earlier data was simply wrong (or that some number of expansion enrollees have dropped off since then as well), in which case "only" 15 million of the ~17.5 million net increase is ACA expansion-specific. If that's the case, "only" about 86% of the net gain is thanks to the ACA. 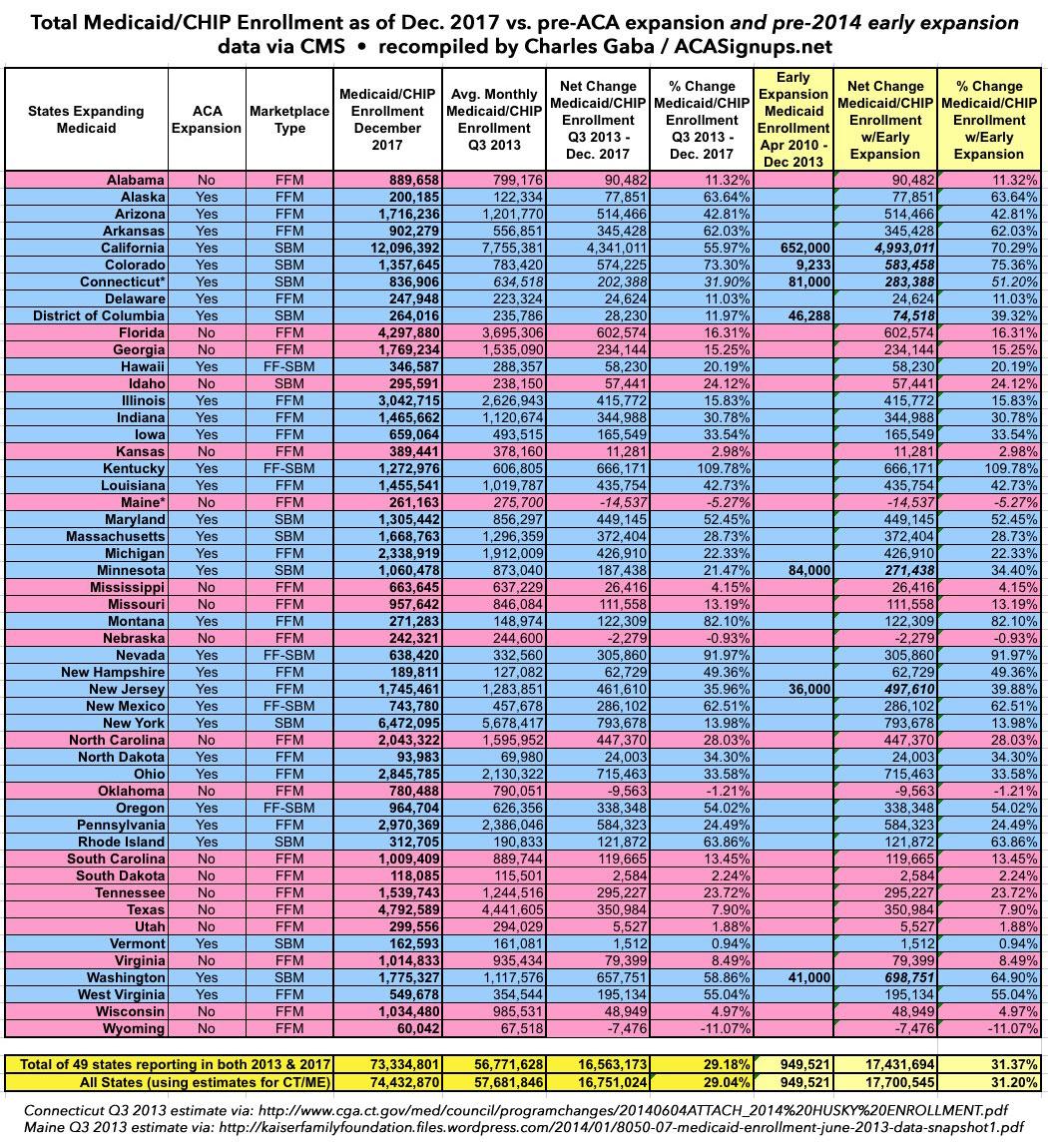