Today, the Department of Labor, Department of Treasury, and Department of Health and Human Services (HHS) issued a proposed rule to revise the definition of short-term, limited duration coverage. Under the new rules, short-term policies may be offered only for less than three months, and coverage cannot be renewed at the end of the three month period. The proposed rule also improves transparency for consumers by requiring issuers to provide notice to consumers that the coverage is not minimum essential coverage, does not satisfy the health coverage requirement of the ACA, and will not prevent the consumer from owing a tax penalty. The proposed changes will help strengthen the risk pool by ensuring that short term limited duration plans are used only as intended, to fill truly temporary gaps in coverage.

All of this made perfect sense...and to be honest, I was surprised at the time that this hadn't been done several years earlier.

Unfortunately, the mandate penalty has now been killed off by Congressional Republicans, which makes the "satisfy requirements" and "owing a tax penalty" points moot, but it's still a good thing for the risk pool.

Yeah, well, so much for that:

In direct response to President Trump’s October 2017 Executive Order, the Departments of Health and Human Services (HHS), Labor, and the Treasury (the Departments) issued a proposed rule today that is intended to increase competition, choice, and access to lower-cost healthcare options for Americans. The rule proposes to expand the availability of short-term, limited-duration health insurance by allowing consumers to buy plans providing coverage for any period of less than 12 months, rather than the current maximum period of less than three months. The proposed rule, if finalized, will provide additional options to Americans who cannot afford to pay the costs of soaring healthcare premiums or do not have access to healthcare choices that meet their needs under current law.

I've written several explainers about this development, both last October when the executive order was originally issued and then again last month when a formal press release was issued.

In other words, now that...

...they've decided that the solution to the very problem they've deliberately created is...to allow people to buy policies which aren't required to include pretty much any of the ACA's requirements for an actual healthcare policy, such as Guaranteed Issue, Community Rating, Essential Health Benefits and so on...and which in turn also don't include any tax credits, caps on maximum out of pocket costs and so forth.

In short (pun intended), here's what the Three-Legged stool looked like up until last fall: Mostly sound, but with two major gaps: The mandate wasn't strong enough and the tax credits weren't generous enough/offered to enough people. 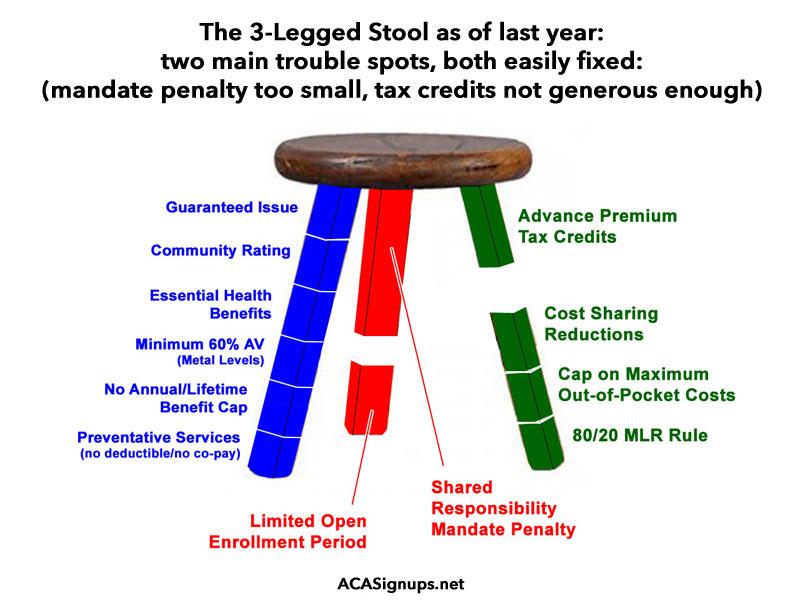 Here's what it looks like as of today. Trump killed the CSR payments, but thanks to a clever workaround by the carriers, state insurance regulators and most of the state ACA exchanges, they were able to not only mitigate most of the CSR damage but improve the subsidies for those who qualify. Unfortunately, this also made the situation worse for those unsubsidized. Meanwhile, the GOP also infamously "solved" the problem of the mandate penalty being too small by...killing it off altogether. Lovely. 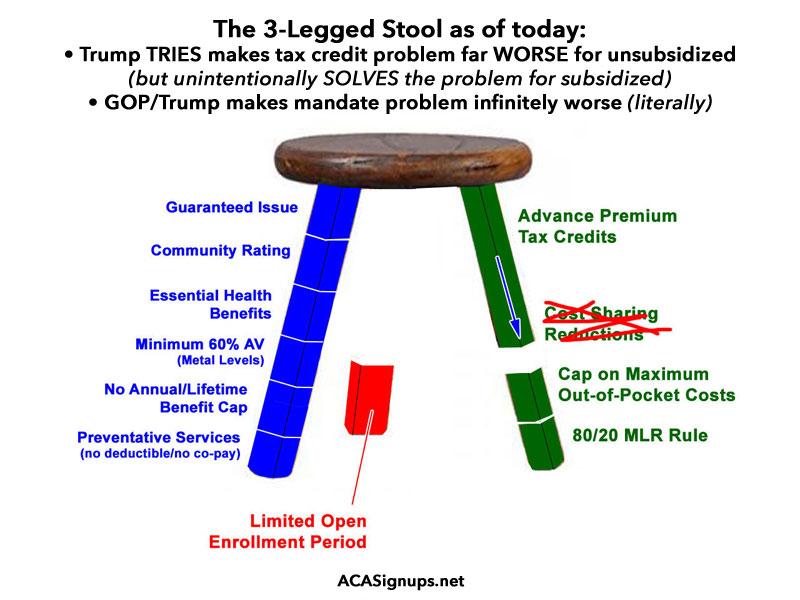 Well, assuming carriers actually start offering new newly-kosher "Short Term" plans (which actually last up to 364 days a year...I guess you just make sure to stay in bed one day per year?), here's what it will look like for unsubsidized enrollees (those earning over 400% of the Federal Poverty Line): 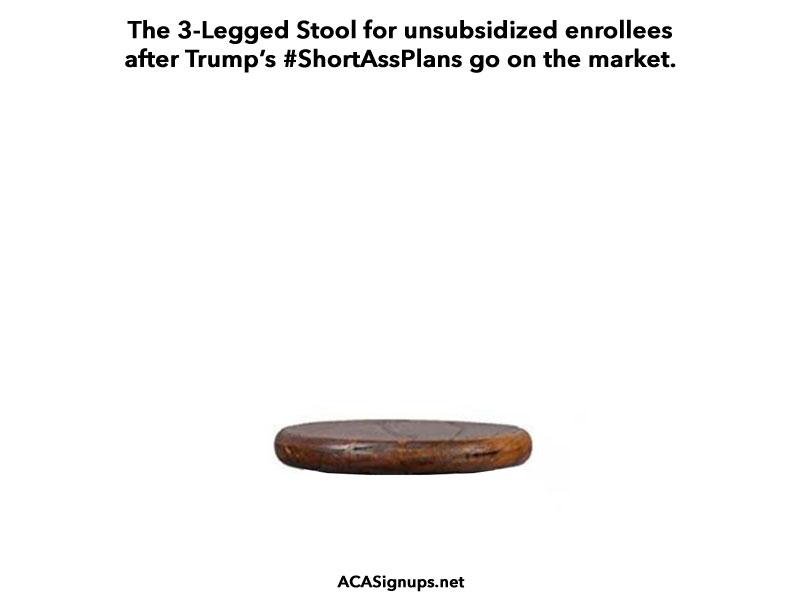 “Americans need more choices in health insurance so they can find coverage that meets their needs,” said Health and Human Services Secretary Alex Azar. “The status quo is failing too many Americans who face skyrocketing costs and fewer and fewer choices. The Trump Administration is taking action so individuals and families have access to quality, affordable healthcare that works for them.”

Yes, "skyrocketing costs and fewer and fewer choices"...both fo which have been, in large part, deliberately caused by Donald Trump and Congressional Republicans. Got it.

Short-term, limited-duration insurance, which is not required to comply with federal requirements for individual health insurance coverage, is designed to provide temporary coverage for individuals transitioning between healthcare policies, such as an individual in between jobs, or a student taking a semester off from school. Access to these plans has become increasingly important as premiums have more than doubled - PDF between 2013 and 2017 in health plans on the Federal Health Insurance Exchange. And half of the counties in America have only one insurance carrier to choose from.

Once again, it was actually an 84% average increase between 2013 - 2017 (high, yes, but not 105%), and the primary reason for that increase is that the plans sold had to actually COVER HEALTHCARE.

Contrast that with the 17% increase this year and projected 10% additional increase next year which have been/are being caused deliberately by the GOP as a pure sabotage measure.

It's also important to note that today's HHS proposed rule itself SPECIFICALLY STATES that short-term plans ARE NOT HEALTH INSURANCE:

The PHS Act does not define short-term, limited-duration insurance. Under regulations implementing HIPAA, and that continued to apply through 2016, short-term, limited-duration insurance was defined as “health insurance coverage provided pursuant to a contract with an issuer that has an expiration date specified in the contract (taking into account any extensions that may be elected by the policyholder without the issuer’s consent) that is less than 12 months after the original effective date of the contract.”

Of courrse, as Nicholas Bagley noted...

HHS could find itself in legal trouble on this one. The ACA rules don't apply to "short-term limited duration insurance." But a 364-day plan isn't of "limited duration" and, if it's easily renewable, it's not "short term." I'd love to litigate that case.

"Some discretion," yes -- but within the bounds of the law. Because insurance is sold on an annual basis, the claim that a 364-day plan is "short term" relative to a one-year baseline is strained.

If insurance is typically sold on a one-year basis, how can you say with a straight face that a 364-day plan is "short term limited duration insurance"? The statute affords HHS some discretion, but not that much. pic.twitter.com/cs1QvuBLQI