Donald Trump is about to do to health insurance what Trump University did to education. 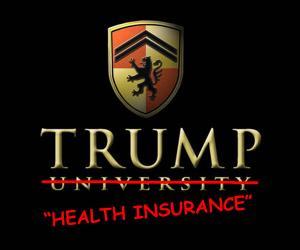 (yes, I know everyone else was posting writeups about this yesterday; I was a little swamped with some personal issues)

The original announcement was made last fall:

Well, yesterday the Trump Administration made it official:

The Trump administration on Thursday proposed new rules to let certain small businesses and trade groups band together to buy health care, in its latest move that could weaken Obamacare's insurance marketplaces.

The expansion of so-called association health plans is part of a broader effort to encourage the rise of cheaper coverage options that are exempt from certain Obamacare patient protections and benefit rules.

The proposed rules stem from an executive order President Donald Trump signed in October directing federal agencies to loosen restrictions on short-term health insurance and association health plans, in a bid to create more insurance competition and drive down premiums. The administration's move was praised by many business groups and conservative lawmakers, including Sen. Rand Paul (R-Ky.), who has long advocated for an expansion of such plans.

"Conservative health care reform is alive and well, and I will keep working with President Trump to build on this progress," Paul said in a statement.

However, state insurance regulators and Obamacare advocates have warned that lax rules could open the door to a new wave of poorly regulated health plans that exclude coverage of key services required by the Affordable Care Act, such as hospitalizations and prescription drugs.

Let me repeat that: Hospitalization and prescription drug coverage wouldn't be required by something calling itself a "health insurance policy".

“The Trump administration has declared open season for fraudsters selling junk insurance while those with pre-existing conditions will find health care further and further out of reach,” said Sen. Ron Wyden (D-Ore.), the top Democrat on the Senate Finance Committee.

The very next sentence in the article makes it sound like this isn't too big of a deal...

The association plans, however, aren’t exempt from the popular Obamacare provision banning insurers from charging people more or denying coverage based on a pre-existing condition.

...but when you think about it for more than a millisecond, that's a distinction without a difference: All one of the short term/association plans--I'm calling them #ShortAssPlans--has to do to deny people with, say, cancer, is to simply not include chemotherapy as a covered service. Voila, they just chopped the premiums down to size like magic!

What follows is partly a repost of what I said in October...which in turn was mostly cribbed from an earlier post from last summer, when Ted Cruz briefly tried pushing through his own version of something similar):

If and when these #ShortAssPlans actually go into existence (and Short Term Plans, or STPs, already exist today), the individual market would be deliberately split into high- and low-risk pools by design. Some would argue that it was already headed that way before Trump took office, but his cutting off Cost Sharing Reduction (CSR) reimbursements last fall sped that process along somewhat...and the repeal of the Individual Mandate (starting in 2019) will ramp that up further yet. #ShortAssPlans would be the final phase in wiping out the ACA-compliant individual market for anyone earning more than 400% of the Federal Poverty Line.

According to this study by the Kaiser Family Foundation, 5% of the general population accounts for fully 50% of total healthcare spending, with the other 95% costing the other 50%:

According to the official numbers from CMS (and this is Trump's CMS, I should remind you), in 2017, unsubsidized/full price individual market plan premiums averaged around $467 per month, or $5,604/year, which already stings a bit for most people if they aren't receiving financial assistance. Remember, that's basically for a Silver ACA-style plan.

Needless to say, this will cause even more of those who aren't subsidized to move off of ACA exchange policies onto #ShortAssPlans.

It just gets worse from there. You can see how quickly the ACA exchange market would become a de facto High Risk Pool, and an insanely expensive one at that. Aside from this being morally questionable, it would also become absurdly expensive for the federal government, as APTC subsidies would shoot through the roof.

Of course, that's already happening in 2018 thanks to Trump cutting off Cost Sharing Reduction (CSR) reimbursement payments to carriers; doing so simply led the carriers to shift those costs onto the premiums themselves, meaning much higher APTC subsidies for the feds. Bravo, Trump Administration! 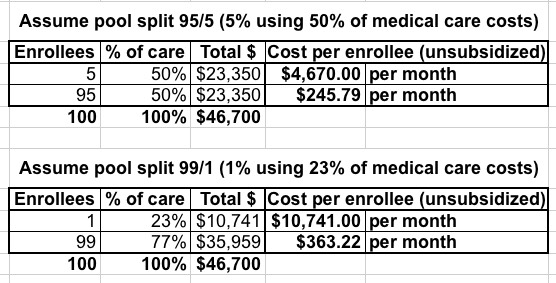 Also bear in mind that the other major problem with this scenario is that you never know who's going to turn out to have a "high risk" medical condition. Any one of the 50%, 80%, 90% or 99% who choose to enroll in the cheap #ShortAssPlan which presumably wouldn't cover the ACA's Essential Health Benefits could suddenly find themselves diagnosed with cancer, diabetes, a problematic pregnancy or whatever, and now they're screwed because their "cheap" plan doesn't cover the very healthcare needs that they find themselves requiring.

They have to dump their #ShortAssPlan and move to the ACA exchange (which requires their ailment be covered). If they're below 400% FPL, they'll find the policies there to be affordable. It may cost more than the #ShortAssPlan, but after the tax credits, it'll at least be reasonable.

Or, as David Anderson so eloquently put it...

Of course but #400FPLSOL is an unstated underlying assumption

Here's a simple table breaking it all out (I also included the Medicaid expansion crowd for completeness):

So who'd be utterly screwed by this? People like my friend Laura Packard, who you might have read about recently:

I'll have much more to write about this soon.