Last month, Covered California issued an extensive analysis of the individual market landscape for 2019 and concluded that the recent actions taken by Donald Trump and Congressional Republicans (especially, of course, the repeal of the individual mandate) will collectively cause rates to spike by up to 30% even without taking into account the normal medical inflation one would normally expect every year anyway. I didn't see a whole lot of reporting on this report other than my post and Michael Hiltzik's story on it at the L.A. Times, but I might've missed others.

In any event, here's another extremely early look at 2019. A couple of weeks ago I attended the Families USA Health Action Conference in Washington D.C. This week it was time for an even wonkier variant: The National Health Policy Conference, which I believe was sponsored by AcademyHealth. I didn't attend this one, but my friend and occasional collaborator David Anderson of Balloon-Juice did, and he gave me a heads up about some critical info presented this afternoon:

#NHPC18 last session of the conference .... Individual market--- what's next

#nhpc18 premium drivers are diverse based on 7% trend@charles_gaba 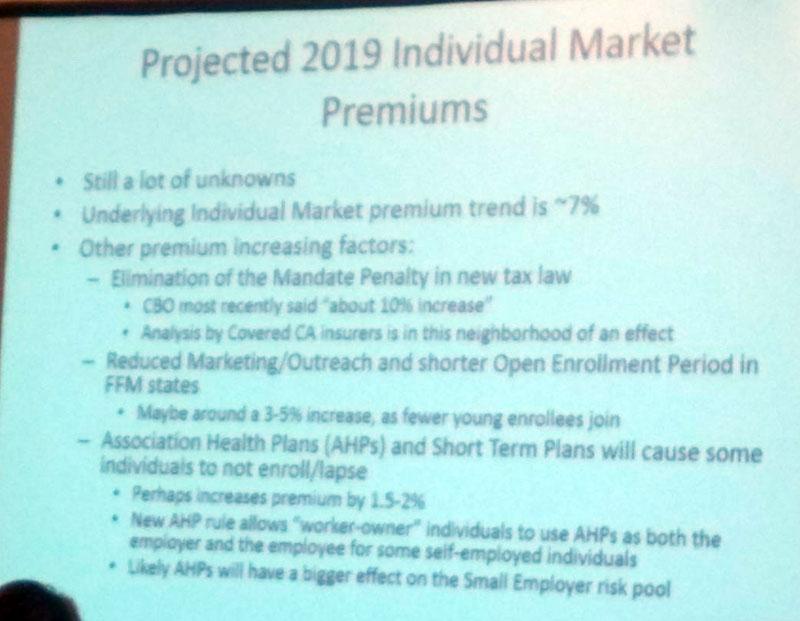 OK, the slide image is pretty blurry, but the gist is this, according to whoever was giving this presentation (who I presume understands risk pools and the general lay of the land of the individual market going into the next year better than I do):

Anderson did go on to remind me that the Continuing Resolution bill from a couple of weeks back did put the kibosh on the Insurer Carrier Tax for another couple of years starting in 2019, so that should knock premiums back down perhaps 2-3%.

Add it all up and according to this analysis, it looks like they're projecting somewhere in the neighborhood of 20% rate hikes on the individual market for 2019 in the absence of any significant changes/action on the part of the federal (or state) governments.

This is a lower than the 16-30% range projected by the Covered California analysis without the "underlying trend" (around a 23% mid-range), but it's still not pretty.

Obviously there's any number of crazy things (good or bad) which could happen between now and this November, and some of the above projections are pretty speculative anyway, but assuming this is in the right ballpark, it means that once again, literally 2/3 of next year's premium hikes can be pinned specifically on utterly unnecessary, harmful actions/policies implemented by Donald Trump and Congressional Republicans.