I know it's Christmas Eve, and I know it's not the biggest deal in the world, but this headline has been irritating the hell out of me for the past couple of days:

WASHINGTON — Americans in states that Donald Trump carried in his march to the White House account for more than 4 in 5 of those signed up for coverage under the health care law the president still wants to take down.

An Associated Press analysis of new figures from the government found that 7.3 million of the 8.8 million consumers signed up so far for next year come from states Trump won in the 2016 presidential election. The four states with the highest number of sign-ups — Florida, Texas, North Carolina and Georgia, accounting for nearly 3.9 million customers — were all Trump states.

Yes, this is true: ~7.3 million out of 8.8 million, or roughly 83%, of enrollees in the 39 states covered by HealthCare.Gov do indeed reside in states won by Donald Trump last year.

HOWEVER, that 8.8 million doesn't include the 11 states (+DC) which run their own ACA exchanges...and which have collectively enrolled over 2.8 million people.

And just what are those missing state exchanges? California, Colorado, Connecticut, the District of Columbia, Idaho, Maryland, Massachusetts, Minnesota, New York, Rhode Island, Vermont and Washington State. Notice anything about that list? That's right: Hillary Clinton won 11 of the 12 (the odd man out is Idaho).

When you add them to the mix, you find that the actual breakout is about 64% in Trump states to 36% in Clinton states.

10 of the 12 missing states (all of them except for Idaho and, oddly enough, Vermont) had/have extended Open Enrollment Periods beyond December 15th, which means they're still enrolling people even as I type this (OK, maybe not so much today or tomorrow, being Christmas weekend, but still). By the time the dust settles, I expect another 250,000 or so enrollees to be racked up from those states, Since Idaho isn't among them, that means all ~250K would be added to the Clinton state list.

Of course, there's also some missing enrollees on the HC.gov side, due to the hurricane SEP (7 out of 8 states of which went to Trump), along with those who enrolled between Midnight and 3am Eastern Time on 12/16, and some who had to leave their phone number for a callback. I'm estimating those at perhaps 150,000, of which I concede the vast majority would come from Trump states; let's call it ~130K out of ~150K.

Combined, that would bring the grand total to around 12.0 million people, of which 7.4 million would be in Trump states...or about 62%.

The worst part about this rather lazy reporting is that it doesn't mention the missing states until 8 paragraphs in:

...It’s unclear what the final count for next year will be. HealthCare.gov numbers released Thursday are incomplete, and some states running their own insurance websites will continue enrolling people throughout January.

I also have to admit to being slightly amused by this phrasing: "An Associated Press analysis..." and "AP’s analysis found that 11 states beat 2017’s enrollment figures". The wording fo these makes it sound like there were hours of complicated number-crunching involved here, as opposed to 1) simply looking at the 2nd table here, 2) adding up the numbers in the states Trump won and 3) subtracting the numbers from these. That takes, like, five minutes to do:

Anyway, yes, a 62/38 tilt towards Trump states is still slightly ironic, I suppose, but it's far less so than 83/17...and even then, you'd have to look at the county-level data to really get a sense of what the real ratio is.

UPDATE: This may be pushing it, but I'm gonna take a shot at making this last point. I don't have county-level enrollment data yet, of course, but I do have the state-level popular vote results from each state: It's important to remember that just because Trump or Clinton won a state's electoral votes doesn't mean every voter in that state voted for them. Even in extremely lopsided cases like West Virginia (where Trump received 68.5% of the vote) or the District of Columbia (where Clinton received over 90%), there's always a chunk who voted for the other candidate...or for a third party, for that matter. My own state of Michigan, for instance, was nearly 50/50 between the two; obviously not all 299,000 ACA enrollees voted for Trump. It might not have been 50/50, but it sure as hell wasn't 100%/0%.

With that in mind, here's what the "likely Clinton/likely Trump" split looks like when you allocate each states' ACA enrollment proportionately by the percent of the popular vote won by each candidate. Surprise, surprise: It ends up not only nearly dead even...but with a slight lean towards Hillary Clinton, just like with the actual popular vote. Imagine that. When I plug in rough estimates of the ACA enrollments yet to be added via extended enrollment periods, the hurricane SEP and so on, it nudges it even more towards Clinton.

You'll notice, too, that when you add everything up it only totals around 11.3 million even if I tack on another 400,000 to bring the grand total to 12 million even. Where's the other 700,000? Well, remember, Gary Johnson, Jill Stein, Evan McMullin and other assorted 3rd-party candidates made up around 5% of the total popular vote...which means that, on a strict proportional basis, around 700,000 exchange enrollees presumably voted for one of them.

Don't get me wrong--it's entirely possible Trump voters do make up a disproportionately high percentage of 2018 ACA exchange enrollees...I'm just saying that you can't prove that by simply looking at which states they live in. You'd have to drill down to county or Congressional District-level to get a realistic sense of that, and even then it would only be accurate to a certain degree. Sorry to burst anyone's bubble. 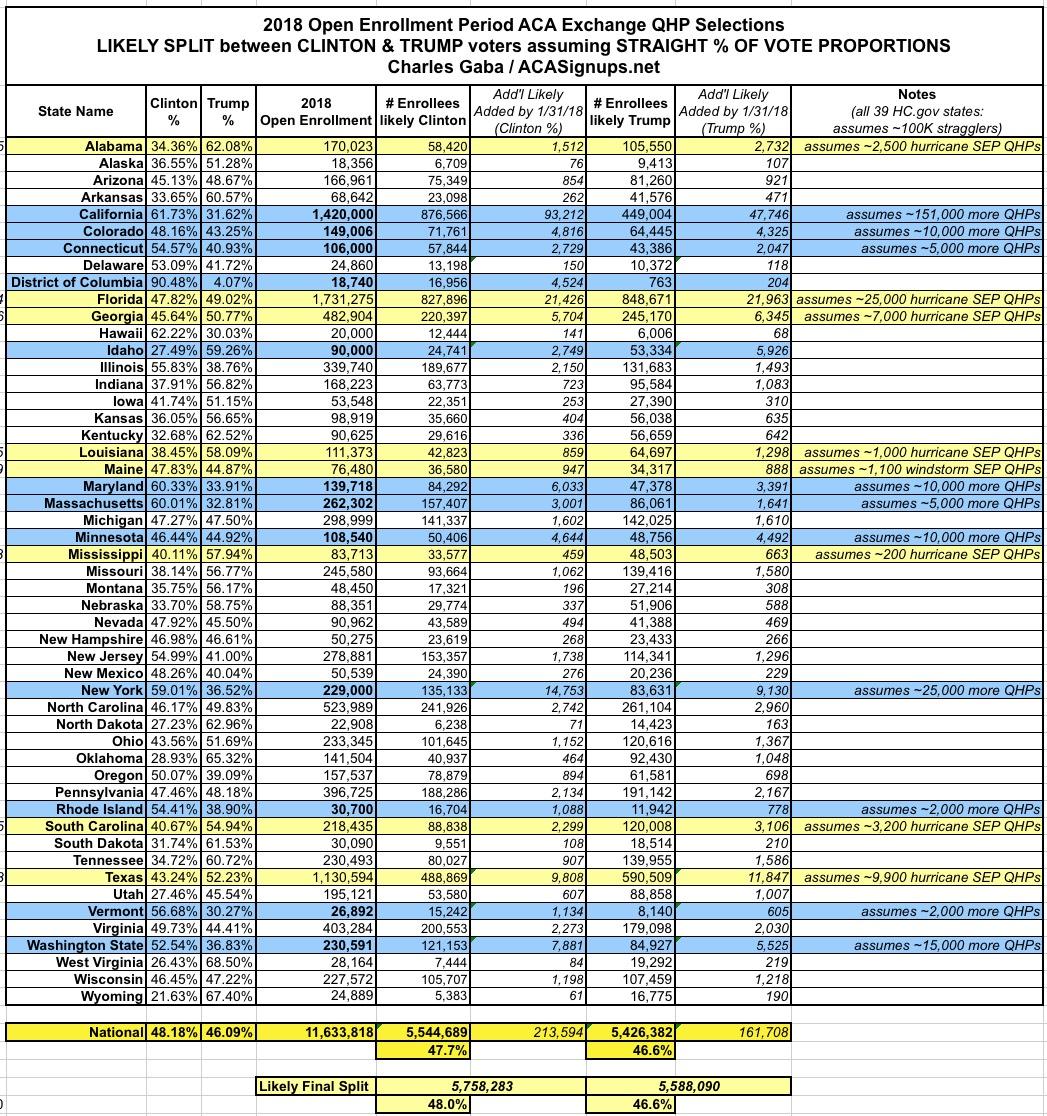 As an aside, there's also another important factor: Medicaid expansion.

31 states (+DC) have expanded Medicaid under the ACA, while 19 states haven't. Eighteen of the nineteen states which haven't are on the federal exchange (again, the odd man out is Idaho).

Why is this important? Because any enrollee earning between 100-138% of the Federal Poverty Line would be shifted over to Medicaid instead if the state had enrolled the program under the ACA.According to the CMS Public Use File for 2017, around 2.75 million ACA exchange enrollees living in the non-expansion states earn between 100-150% FPL. Assuming an even distribution across the income range, around 76% of those folks should fall into the 100-138% range, or about 2.1 million of them. That's around 22.7% of the 9.2 million HC.gov enrollees last year. Proportionately speaking, that should equate to roughly 2.0 million of the 8.8 million HC.gov enrollees this year.

And how many of those live in states that Hillary Clinton won? Well, the only Clinton states which haven't expanded Medicaid yet happen to be Maine and Virginia (which also, by no small coincidence, happen to be the two states which just voted to either expand Medicaid or to elect a new Governor and state legislature largely on their promise to do so). Maine & Virginia likely include roughly 120,000 enrollees between 100-138% FPL so far this year.

Subtract those two out and have around 1.9 million people in Trump states who should be enrolled in Medicaid instead. If you assume the 12.0 million total above and subtract them from the total, the ratio ends up being more like:

...which would make the "Medicaid expansion-adjusted" ratio more like 55% Trump states / 45% Clinton states in terms of enrollees who should be on exchange plans.